The Sukma superintendent of police apparently made the comments at a function organised by an automobile company. New Delhi: Amidst continuing reports of rampant human rights violations in Bastar, the Sukma superintendent of police, Indira Kalyan Elesela, has stirred up a fresh controversy by saying that human rights activists should be crushed on the highway using advanced motor vehicles.

The SP made the controversial statement in Jagdalpur during a program organised by an automobile company to discuss the ‘elimination of the Naxal threat’.

According to a report published in the Chhattisgarh daily Navbharat, “on Thursday, Sukma SP Elesela was invited to a program to discuss the elimination of Naxals from the area. While making his speech, he went on to say that human rights activists like Isha Khandelwal and Shalini Gera should be crushed on the road.”

Lawyers Khandelwal and Gera are part of the Jagdalpur Legal Aid Group and have been instrumental, along with academic and academic-activist Bela Bhatia in the filing of FIRs in cases of gang-rape of adivasi women allegedly by security forces personnel in Chhattisgarh. The two lawyers were forced to leave Bastar last year after their landlord refused to rent his house to them citing police pressure.

The Navbharat report adds, “During the program, Elesela was speaking about the condition of Bastar’s roads which the state government is building to adapt to heavy and advanced technology vehicles. While making this statement he pounced at human rights activists, calling them Naxal-sympathisers and said that those vehicles should be used to crush them. He said that strict action would be taken against those who oppose the government and support the naxals.”

Patrika has published a similar story on its front-page. According to its report, the event at which Elesela made his controversial statement was organised by an automobile company.

A senior journalist based in Raipur says, “There was an uproar in the Chhattisgarh assembly over the SP’s statement after [opposition leader] T.M. Singh Deo raised the issue in the house on Friday.”

Elesela made the remark in the presence of Bastar’s former inspector general S.R.P. Kalluri – himself accused of human rights violations and recently transferred out in the face of mounting criticism – and Jagdalpur SP R.N. Das. Kalluri has been in Bastar for the past three days. He had recently been attached to the state’s police headquarters without any charge.  Kalluri’s removal from Bastar came in the wake of the National Human Rights Commission questioning his conduct in the filing of false cases against Nandini Sundar, Archana Prasad and other scholars who had visited Bastar last year as part of a fact-finding team, as well as allegations of gang rape against the police force which he commanded. 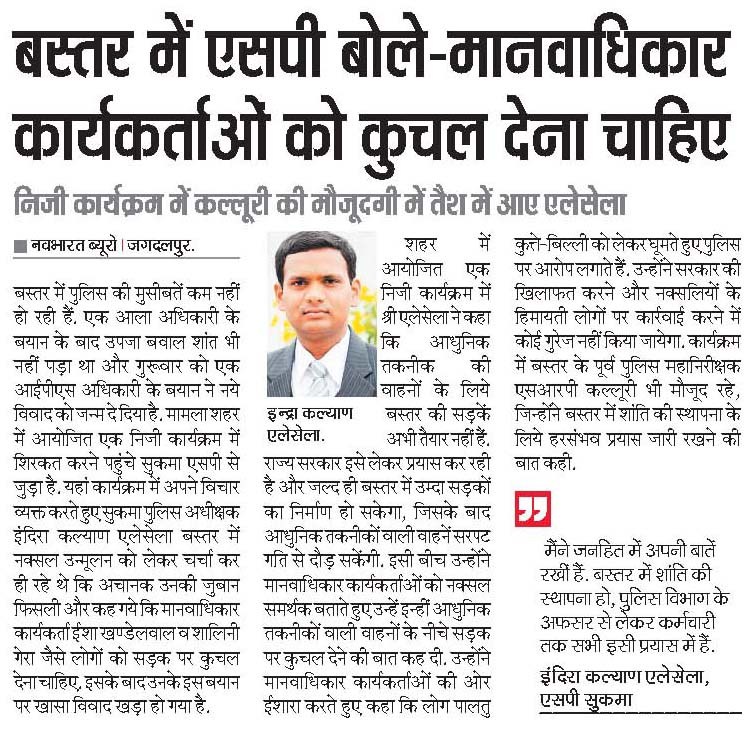 Two days ago, Kalluri circulated a video on WhatsApp, announcing BJP’s victory in four states including Uttar Pradesh. After the video came to light, the Chhattisgarh Congress demanded disciplinary action against him, citing the civil service code of conduct.

Talking to The Wire, Gandhian activist Himanshu Kumar, who has spent a long time working in Chhattisgarh, said, “Earlier, Elesela was additional SP in Bijapur. When IG Kalluri orchestrated the attack on [Aam Aadmi Party leader] Soni Sori, an SIT was set up, led by Elesela. They used to summon Sori’s relatives and beat them up. Once, while beating Sori’s brother-in-law, he allegedly told him that he could not meet his target of 250 encounters because of Sori and Linga Kodopi. Madkam Hidme was killed in a fake encounter during that time.”

Kumar further added, “Look at how an official is making such a statement against Isha Khandelwal and Shalini Gera that they should be crushed under vehicles. Our entire government system is in the hands of goons and there are those in the country who back them. It is with this kind of support that they are running amok”