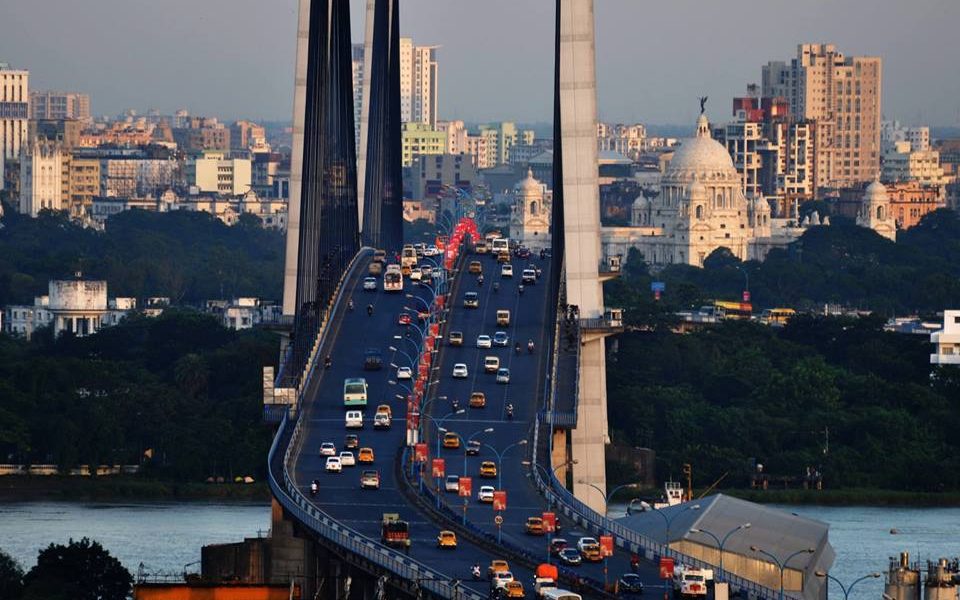 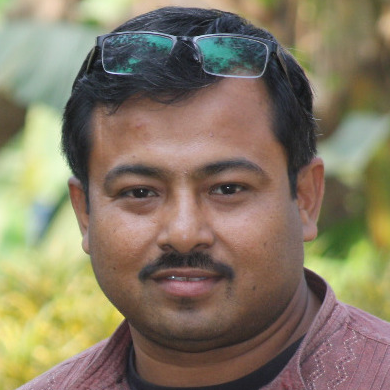 The West Bengal assembly will discuss the state budget later this week, which was presented by the finance minister on February 4, 2019. In a context where the GDP growth data released by the Union government’s Central Statistics Office  has been challenged by several experts and academics, including a former chief economic advisor, the claims being made by the West Bengal state government also need to be scrutinised.

The state finance minister had claimed in his Budget speech that West Bengal has attained the top position among all states by securing 16% GSDP growth at current prices in 2017-18. However, the actual economic growth data that matters is the GSDP at constant prices, which adjusts for inflation. In terms of constant prices, the same CSO data shows GSDP growth to be 9.1% in 2017-18, which means inflation was around 7% in West Bengal, much above the national average.

The GSDP data released by the CSO also show significant revisions in the 2011-12 series GSDP growth rates for West Bengal from what was published in the state’s budget documents last year (Table 1). As can be seen from the table, the real GSDP growth rate for 2017-18 has been revised downward from 11.5% to 9.1%. The growth rates in 2012-13, 2013-14 and 2014-15 have also undergone significant downward revisions from what was claimed in the state budget.

While the West Bengal economy appears to have grown faster than the national economy in 2017-18, the average GSDP growth rate in the state between 2012-13 and 2017-18 has been 5.5%, lower than the average GDP growth of 7.1% registered by the Indian economy during the same period (Table 2).

As a result, the share of West Bengal’s real GSDP in all-India GDP has declined from around 6% in 2011-12 to 5.5% in 2017-18. This does not indicate a relatively better growth performance of the West Bengal economy compared to the overall Indian economy.

The 2019 state budget has claimed that the West Bengal GSDP at constant prices has grown at 10.7% in 2018-19 (advanced estimates) as against the all-India growth rate of 6.8%, with the share of the state economy improving to 5.7% of the national economy. This implies that while economic growth has been slowing down all over India in the last two years, the West Bengal economy is somehow witnessing a growth acceleration.

The basis or the estimation methodology behind this claim has been left unexplained. The rise in annual average income of a farmer in West Bengal as claimed by the minister amounts to an income growth of around 219% in seven years, at an average of 31% per annum. However, the data on GSVA of agriculture and allied activities published in the fiscal policy strategy statements reveal an annual average output growth of 2.7% between 2012-13 and 2017-18.

Also read | Battleground Bengal: What led to the Escalation of Political Violence in the State

Since then, available official data on agricultural growth and per capita income do not reflect any significant improvement in the agrarian situation in West Bengal. In fact this year’s state budget announces a ‘Krishak Bandhu’ scheme, whereby an annual grant of Rs 5,000 will be paid out to 72 lakh farmers and share-croppers of the state who own over one acre of land.

Had the average income of farm families indeed risen to Rs 2,90,000 in 2017-18 as claimed by the finance minister, what was the need to provide them with another Rs 5,000 per annum dole? This appears to be a gross over-estimate based on flawed methodology, being carelessly made in a budget speech.

The finance minister has claimed credit for bringing down the revenue and fiscal deficit in West Bengal from the high levels which existed before the present regime came into office in 2011. He has also claimed to have increased tax collections by 2.5 times in seven years and spent Rs 92,000 crore in capital outlays on creating infrastructure and social assets.

A comparison of the revenue performance of the West Bengal government with the other Indian states, however, made on the basis of RBI data on state budgets, reveals how West Bengal continues to lag behind in resource mobilisation (Table 3).

While the revenue receipts as a proportion of GDP increased from 12.5% in 2012-13 to 15% in 2018-19 for all Indian states, mainly on account of the increase in Central transfers to the states following the 14th Finance Commission recommendations, revenue receipts in West Bengal have fallen 11.3% to 10.5%. This is because West Bengal’s own-tax revenues have declined from 5.4% of GSDP to 3.3% of GSDP, while the own-tax revenue/GDP ratio for all states taken together have remained between 6 to 6.6% during this period. Even in non-tax revenues, West Bengal’s mobilisation falls far short of the average of all states.

Table 3: Revenue Receipts: Comparison of West Bengal with All States 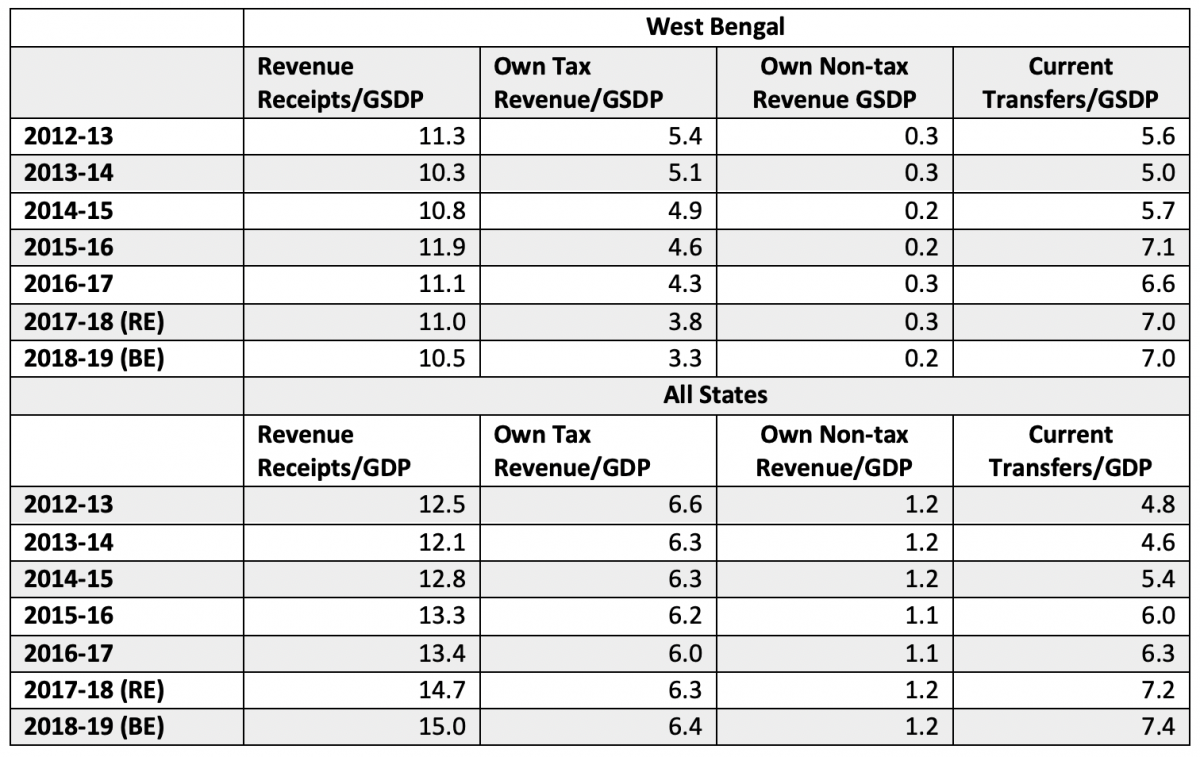 Table 4: Development Expenditure: Comparison of West Bengal with All States 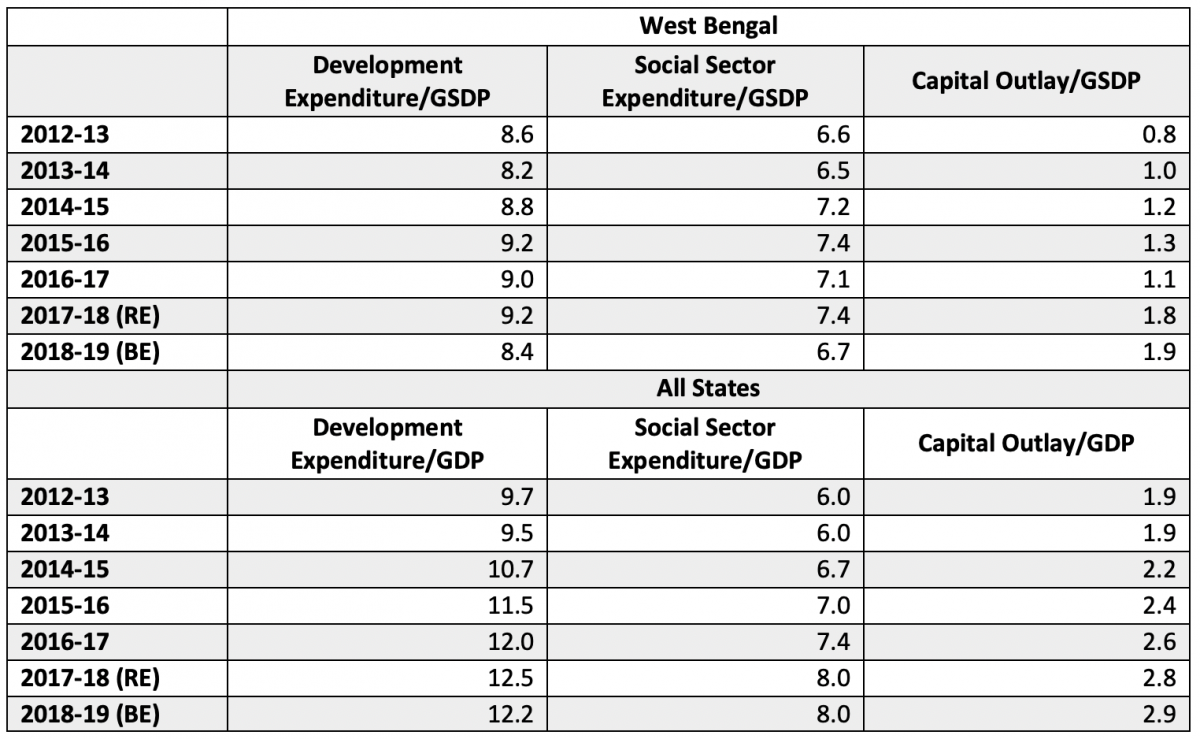 There has been a slight increase in capital outlays as a proportion of GSDP in West Bengal in the last two years, but such capital expenditure still falls far short of the all-States average and occurred alongside a cut in social sector expenditure. Far from reflecting a picture of improving fiscal health, West Bengal has continued to remain among the most poorly performing states in India, as far as the state finances are concerned.

The budget speech of the West Bengal finance minister blames Union government policies like demonetisation and hasty implementation of the Goods and Services Tax for rising joblessness and refers to the high unemployment rate prevailing in the country, the highest in four decades.

Despite all this, the finance minister claims that 9.05 lakh employment opportunities were created in West Bengal in the financial year 2018-19. Once again, there is no substantiation, let alone any empirical evidence to suggest which sectors these jobs have been created in.

The budget speech twice refers to the $145.93 billion worth of ‘business and investment proposals’ attracted by the 2018 Bengal Global Business Summit. But such proposals largely remain on paper. As far as concrete investment projects are concerned, the budget speech discloses that in 2018-19, the West Bengal Industrial Development Corporation has allotted land to eight units, with proposed investment of Rs 583.56 crore with employment potential of 1,813 persons only.

It is further mentioned that the West Bengal Industrial Infrastructure Development Corporation has allotted 1,623 acres of land in 17 industrial growth centres to 489 industrial units with a projected investment of Rs 3,519 crore and employment potential of 44,512 persons, but the years of land allotment or completion of the industrial projects have not been mentioned.

Many of these units have been functional for quite a few years now and hence this does not amount to additional employment generation. Same is the case with the 190 odd IT companies operating in 17 IT Parks directly employing 3,000 IT professionals.

A new initiative announced in the budget promises financial assistance of Rs 1 lakh each to 50,000 unemployed youth in the state, to create self-employment opportunities. All of these half-baked and grossly inadequate investments taken together would not have created even a fraction of the nine lakh odd employment opportunities that the finance minister claimed to have created in 2018-19. With little fiscal latitude to step up public spending and a continuing drought in private investment, the West Bengal government does not seem to have a coherent strategy for employment generation.

The latest employment data made available through the Periodic Labour Force Survey (PLFS) 2017-18 shows that while unemployment has risen in West Bengal both in the urban as well as the rural areas between 2011-12 to 2017-18, for the first time in decades the unemployment rate in the state has remained below the national average (Table 5). This need not be a matter of relief though, for several reasons.

The proportion of casual labourers in the workforce in West Bengal was 32% in 2017-18, much above the national average of 25%, and 59% of the regular wage/salaried workers in the non-agriculture sector in the state did not have any social security benefits like pensions, healthcare or maternity benefits.

This reflects the poor quality of the jobs that most persons are employed in. Moreover, unemployment is quite high among the educated workforce, especially those with post-graduate and above degrees as well as those with diplomas/certificates (Table 6).

The acute deficit of decent job opportunities within the educated youth in West Bengal was revealed when 24.68 lakh candidates applied for the written examination for 6,000 Group D posts of the state government in May 2017. The state budget lacks transparency in providing information on the unemployment situation prevailing in the state and the employment opportunities being created both in the government as well as the private sector.

A similar attitude gets reflected regarding the status of higher education. The finance minister claims in the budget speech that the number of universities in the state has risen from 12 in 2011 to 40 at present, with student enrolment in higher education rising from 13.24 lakh in 2010-11 to 20.36 lakh in 2017-18.

The deficit both in terms the number of higher education institutions in West Bengal, as well as the quality of the institutions, is too glaring to miss. Yet, the budget seems to exude complacency.

The narrative which the finance minister has tried to build through his budget speech, that while the national economy suffers from economic slowdown, farm crisis and growing joblessness, the West Bengal economy has somehow managed to beat the trend and emerge as a rapidly growing economy, creating prosperity for the farmers and generating lakhs of new jobs for the youth, is simply not credible.

The hyperbolic statements and assertions made in the state budget seek to conceal hard facts regarding the economy, state finances and the absence of socio-economic progress at a desirable pace. This neither helps to serve the public interest nor redeem the credibility of the state government.