The expensive project is still incomplete. The state government must conduct an independent review, and take appropriate course-correcting measures, if it really means it to be beneficial. 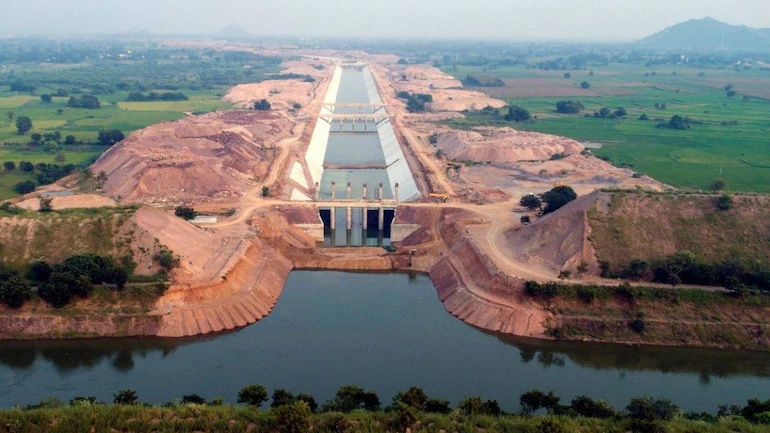 The chief minister of Telangana has made a wild statement that the floods in Bhadrachalam, an important temple town in the state, are the outcome of a “foreign conspiracy”.

During his visit to the inundated town, chief minister K. Chandrasekhara Rao said, “There is this a new phenomenon called cloudburst. This is what happened in the Godavari region which caused the flood. There are reports that these cloudbursts are a conspiracy by foreign sources.”

Indeed, such comments from the head of the state seems somewhat bizarre and even desperate. It is an attempt to divert attention from the serious issue of flooding at the Kaleshwaram lift irrigation project. Kaleshwaram is a pet project of Rao’s, pursued at great speed while knowing full well that it is going to be the most expensive project ever to be undertaken in India.

So far, Telangana has spent Rs 1,20,000 crore (roughly $15 billion), according to various media reports and government reports. More worryingly, loans for the project were apparently raised at hight interest rates, which is the norm with commercial loans. The project is not fully completed, but now these massive pumping stations which are supposed to deliver water are submerged. The cost of recovering and restoring these pumping stations with required repairs may run into thousands of crores. A considerable period of time will be needed to complete these repairs, assuming that they are in repairable condition at all. In order to address this grim situation and make the project viable, substantial changes through an independent review are required.

Telangana state has been established in 2014. The demand for Telangana was based on three major slogans – Neellu, Nidhulu and Niyamakalu (water, funds and jobs). The raison d’être for the formation of the state rested on these three pillars. After a prolonged and consistent popular movement for nearly two decades, Telangana was established.

Water for irrigation was an emotive issue for decades in Telangana and continues to be a major issue for farmers. As expected, the new government focused on water. Three major water infrastructure projects – Mission Kakatiya, Mission Bagiratha and Kaleshwaram Lift Irrigation project – were implemented in the last seven years. The expenditure on these three projects is estimated at around Rs 2,00,000 crore, including massive loans at commercial interest rates and other extra-budgetary sources.

Against this backdrop, the benefits of these three projects and the consequent debt burden has become an intense source of debate. For the sake of clarity, we focus on the Kaleshwaram lift irrigation project, which is most expensive of the three projects mentioned above.

It is also important to acknowledge, according to various studies, two important facts. First, Telangana’s geography is not favourable for gravity-based projects. Though Telangana has a significant catchment area of two major southern rivers, Krishna and Godavari, waters coming from the two rivers into the state are from a lower level, while the lands that require water are placed at a higher level. Therefore, water needs to be lifted for irrigation in various parts of the state. Clearly, this is an expensive process.

Second, the Kaleshwaram lift irrigation project was started before establishment of Telangana. The current government made modifications and certain additions, while accelerating implementation. This resulted in a huge cost spiral and compromise in quality.

At this juncture, the project has progressed to a certain level with substantial public funds being spent on infrastructure. So it is important to pursue plans that make this infrastructure productive – with less financial burden on the state.

The moot issue is what such a process for the future must look like. Of course, a course correction by the Telangana government would entail learning some lessons as well as incorporating appropriate measures to make this huge infrastructure useful for future generations. It is worth recollecting certain facts and some basic features of the Kaleshwaram project.

The Kaleshwaram Lift Irrigation Project, or KLIP, is not a single unit. It is a complex system of inter-connected features that include the following aspects:

First, here are about 20 reservoirs along the way to store 147.7 TMC of water (4,100 million cu.m), and of these several are on the river. But six storage facilities required 35,000 ac of land, of which close to 4,000 ac is forest land. About 31,000 ac of land from farmers has been acquired to construct these reservoirs. In addition to that, close to 6,704 existing houses have to demolished in 21 villages to construct these reservoirs.

Second, the main objective of the project is to lift 195 TMC of water and transport it through 1,600 km of canals and 203 km of tunnels, pumping the same water in nine stages to lift nearly 600 TMC from the source. The barrages, the underground pumping, the tunnels, the canals, the impressive man-made storage in the middle of nowhere, the concrete structures, the power stations, etc., have attracted major national and international attention.

Truly, this costly project for lifting water has become a source for considerable international studies – and even a tourist destination for many politicians in the country. Apparently, the Discovery Channel made a film on the project and even international magazines like Forbes have written about it in glowing terms.

It is also not surprising that neither the Discovery Channel nor Forbes magazine commented on the displacement, the real purpose, costs and end goals. In some ways, the media campaign on the project seems to have morphed into an advertising bonanza. Some national media outlets did report on issues such as rehabilitation around 2021 and costs as early as 2018. Strangely, the banks which financed the project did not carry out an independent review or any deep analysis. Some of the public finance corporations such as the Rural Electrification Corporation have apparently given an A grade, since they funded the project to the tune of Rs 14,000 crore.

The estimated cost of this project was Rs 80,000 crore, but the spending has already reached Rs 1,20,000 crore and there is yet another extension of the project to draw additional one TMC of water per day. It is unclear who is financing the extension phase. According to media reports in August 2021, the cost of this project was estimated then a Rs 1,10,000 crore – but by the time the project is completed with distributary canals and other structures, additional land acquisition, pipes for additional TMC, etc., it may exceed more than Rs 1,50,000 crore.

On the cost of water delivery to end users, it is claimed that the project will provide 165 TMC water which is expected to irrigate 18 lakh acres of dry land. The cost of pumping and other operational and maintenance costs are going to be close to at least Rs 70,000 per acre per season. This is going to be some of the most expensive water ever used for irrigation. All these analyses and calculations were done and presented well before the project began.

Though officially the project has been completed and inaugurated several times at several locations, the entire system as a whole did not function and reservoirs which are supposed store water are still empty. Last year, water pumped to store in the upstream river had to be released back into the downstream due to sudden inflows to the river. Effectively, the project has provided no additional irrigation, no water for domestic use or for industry. Even though it has started functioning, it has run into several problems which could have been totally avoided by designing and implementing the project according normal standards.

KLIP is now being talked about because on July 15, two major pumping stations were submerged, inundating villages as well as marooning hundreds of people working on the project. The situation might get worse in the coming days, as a large quantity of water still has to come from upstream. It is important to mention here that the water discharges were much higher during the 1986 floods. The expert engineers who are not in government suggest that protection measures such as walls around pumping stations are required to protect these facilities. This will mean additional costs – perhaps running into thousands of crores.

In conclusion, it is not too late for the KCR government to make substantial course corrections, so that the Kaleshwaram project is viable and beneficial for Telangana farmers. Otherwise, the chances of the state being bankrupted by such lavish projects remain very high.

Biksham Gujja is an international water policy expert who worked with WWF-International, UN and ICRISAT. He can be reached at gujjab@gmail.com.