A complaint letter to the CBI has provided documents to show that RDL applied for 289 acres of land near Nagpur only on June 16, 2015, even though PM Narendra Modi announced the new agreement on April 10.

New Delhi: A crucial aspect of the Rafale deal, which had gone relatively unnoticed, was brought to light by former BJP Union ministers Yashwant Sinha and Arun Shourie and advocate Prashant Bhushan in their complaint against prime minister Narendra Modi and former defence minister Manohar Parrikar’s alleged “abuse of authority” to the Central Bureau of Investigation for allegedly abusing their authority on Thursday.

In the complaint letter to the CBI, the three told the CBI that Anil Ambani-owned Reliance Defence Limited neither had any land to set up its defence manufacturing unit nor did it have an industrial license when it made a joint venture (JV) offset agreement with Dassault Aviation for the purchase of 36 Rafale fighter aircrafts in 2016.

Alleging that the prime minister ignored these crucial aspects while recommending the RDL as an offset partner to Dassault, the three said that the prime minister’s decision to enter into a sudden inter-governmental agreement with France by retracting the previous purchase agreement that the United Progressive Alliance (UPA) government had struck with Dassault was a motivated one.

The complaint mentions that by overlooking the public sector undertaking, the Hindustan Aeronautics Limited (HAL), which was supposed to get both the offset deal and Dassault’s technology, in the UPA deal, Modi intended to benefit the RDL and its owner Anil Ambani. The three questioned the PM’s logic behind sidelining a company like HAL, which has more than 50 years of experience in aerospace, and recommending RDL, which was formed merely 12 days before Modi announced the purchase of 36 aircraft in April 2015 and had no whatsoever experience in the field.

Although the government has said that it had nothing to do with Dassault’s decision to choose its offset partner and that the deal that Modi concluded with France was purely a government-to-government agreement, the arguments Sinha, Shourie and Bhushan make was further boosted by former French president Francois Hollande’s recent statement indicating that the Indian government suggested RDL as the service provider for the Rafale deal.

Modi announced the new agreement on April 10, 2015, and as per Dassault’s own admission, the French company at the same time agreed to partner with the RDL through a JV to form Dassault Reliance Aerospace Limited, in which RDL would have 51% stake. The complainants provided documents to show that RDL applied for 289 acres of land in Mihan, near Nagpur in Maharashtra, only on June 16, 2015. They said that Reliance issued a press release claiming the same on land inauguration ceremony on August 29, 2015. “We started on June, 16, 2015, with first presentation and in less than 10 weeks we got the land. This is a record,” the complaint quoted from the RDL’s press release.

“Mr. Modi abused his influence to ensure that Mr. Ambani got the land at a throwaway price of 64 crores for 289 acres, in a record time. The very same land is supposed to be used for the Joint Ventures between Reliance and Thales, which is another sub-vendor in the Rafale deal and other Joint Ventures of Reliance with other vendors globally,” the complaint said.

More importantly, the three alleged that the Modi “misused his influence to ensure that the Defence Acquisition Council”, whose approval is needed in all defence deals, complied with his objectives. They claimed once Ambani got the offset deal, it moved swiftly to get all the licences required, and not the other way around.

“Mr. Ambani applied and got various industrial licenses for a number of his defence companies on 22nd of June, 2016,” said the complaint. 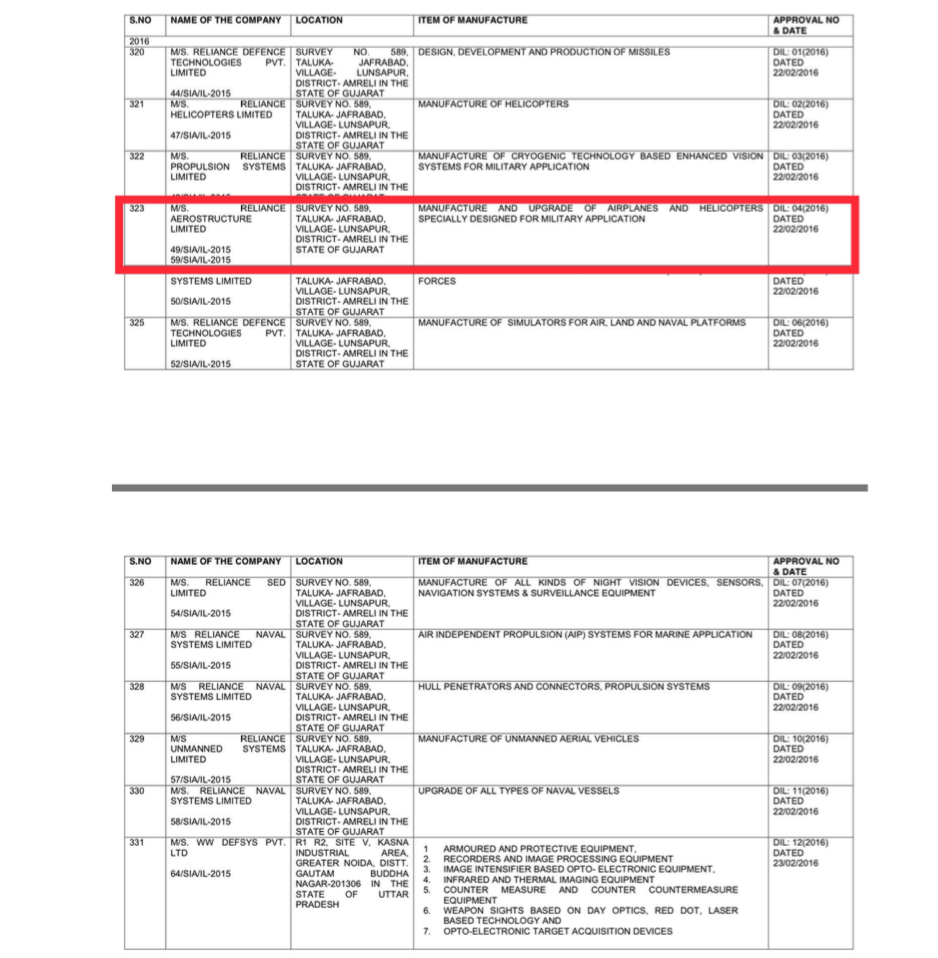 “From the industrial licenses obtained, it is clear that Mr. Ambani, was emboldened by his great heist, and notwithstanding his zero experience in the defence sector, wanted a slice of each and every defence deal, confident in his accomplice, Mr. Modi’s, ability to swing any deal in his favour as the offset partner. Therefore, the incorporation and seeking of various licenses to acquire offsets in helicopters, missiles, land and naval platforms, propulsion systems, unmanned aerial vehicles, naval vessels, “all kinds of night vision devices, sensors, navigation systems & surveillance equipments” and so on and so forth. It would seem that there is nothing that this gentleman with an exceptional track record of failure and insolvency in each and every other industry he has ever undertaken can not do when it comes to a highly skilled and capital intensive sector such as defence. At the time of grant of these licenses, Ms. Nirmala Sitharaman, was the Commerce Minister. She was later elevated to Defence.”

Once the RDL obtained the required licenses, the three said, it was only on September 23, 2016, more than a year after Modi first announced the inter-governmental deal, “the main procurement contract was officially signed along with the offset contract as mandated by the defence procurement procedure (DPP).

They also allege that the Modi tried to cover up the procedural violations – resulting out of sudden incorporation of Reliance in the deal; no discussion about the company had happened at the national level – DPP was amended on August 5, 2015, two months after the new agreement was concluded in France, to accommodate the new deal of which the RDL was a part.

“The amendments only dealt with offset conditions. Evidently, even in August of 2015, when the main procurement contract was yet to be signed, somebody in the government was overly concerned with Offsets. The said amendment was thereafter incorporated in DPP, 2016, verbatim, which came into effect on 1st of April, 2016,” the three alleged in the complaint.

In an accusation that could also open a can of worms, the trio said that the prime minister had no authority to nullify the UPA’s request for proposal (RFP) in which 126 Rafale aircraft had to be bought and which was already “at an advanced stage”. They said the DPP was accordingly amended to incorporate the cancel a previous agreement too to fulfil the objectives of the prime minister.

“The original deal was officially killed on 24th of June, 2015, by retracting the Request for Proposal (RFP) that was issued in 2007. No such provision for retraction of RFP existed in the Defence Procurement Procedure at the time. Again, this is so that no politician —once the entire process has been gone through as per the requirements of the Services, and the equipment has been extensively tested (over three years in this case by the IAF), and the bids have been properly scrutinised —can at the very last moment hold the L1 supplier hostage using the threat of retraction of RFP for the purposes of rent seeking/ corruption/undue advantage. To cover up the conspiracy, an amendment regularising retraction of RFPs was incorporated only on 23rd of July, 2018.”

Submitting their complaint, they said that the prime minister and his defence ministry have abused the authority in what was a case of cronyism. They added that this, however, has compromised national security. The Indian Air Force required 42 squadrons while Modi has purchased only 36, which in itself is significantly lower than the previous order of 126 jets.

The government claimed that it struck the deal with France as it was a case of emergency requirement. However, the complainants said that none of the 36 jets have landed in India even after three years since the deal was concluded. The business deal may simply have got a private company, which was on the verge of insolvency, out of troubled waters, they allege.