Piramal Group Responds to The Wire's Story on Piyush Goyal

'The purchase consideration paid was the fair value of the underlying investments ... [We have] a long track record of acquiring businesses that complement, scale up or grow our existing business offerings and also constantly evaluate any new opportunities to grow in new space.' The Piramal Group has issued a statement in response to The Wire‘s story on the 2014 sale of Flashnet Info Solutions (India) Private Limited – a company owned by Piyush Goyal, who was minister for power and renewable energy at the time – to a Piramal family entity.

The statement was emailed to The Wire at 2245 on Saturday, April 28, four days after the reporter who filed the story, Rohini Singh, first contacted the company with a questionnaire.

The Piramal Group’s statement, which The Wire covered the same night, is reproduced below in full, along with responses from Rohini Singh and The Wire.

We are disappointed in the quality of the reportage in the factually inaccurate and libelous story written by your correspondent Ms. Rohini Singh dated April 28, 2018. The Piramal Group strongly refutes the false allegations made by The Wire and in the interest of our stakeholders, would like to provide the following facts:

Piramal Estates Private Limited (“PEPL”) purchased Flashnet Info Solutions Private Limited (“Flashnet”), a firm owned by Mr. Piyush Goyal and Ms. Seema Goyal, in July 2014. The purchase consideration paid was the fair value of the underlying investments (movable and immovable assets) and the same was paid in July, 2014 itself. This was based on an independent chartered accountant valuation.

Piramal Group has a long track record of acquiring businesses that complement, scale up or grow our existing business offerings and also constantly evaluates any new opportunities to grow in new space.

PEPL has complied with the applicable regulations and done the requisite filings while acquiring shares of Flashnet.

In October 2014, as a part of internal restructuring, the then directors of PEPL, namely Mr. Ajay Piramal, Dr. Swati Piramal, Ms. Nandini Piramal and Mr. Anand Piramal stepped down from the directorship of PEPL. However, the OWNERSHIP of PEPL CONTINUES to be with the Piramal Family.

The allegation that this transaction was done for undue benefit to the Piramal Group, is totally baseless and devoid of any merit.  This malicious news article published by Ms Rohini Singh is libelous and is an attack on the reputation of the Piramal Group. The Group is contemplating taking immediate and appropriate legal measures, including defamatory action, against both The Wire and Ms. Rohini Singh in particular.

On Tuesday, April 24, I sent two SMSs to Ajay Piramal informing him of the fact that The Wire was doing a story on his group and asking what his email address was so that we could get his comments in the interests of fairness and objectivity. 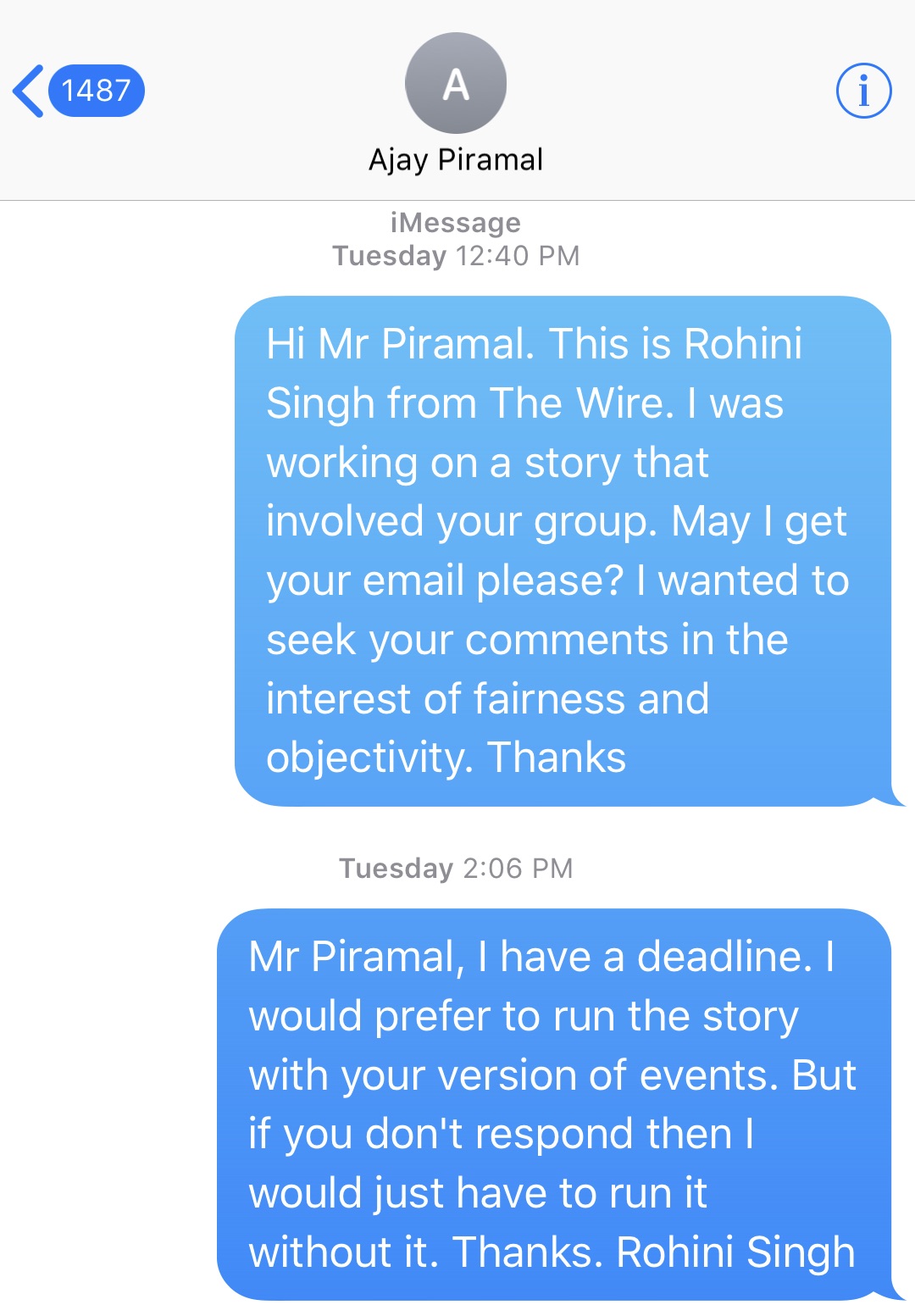 Following my second SMS, I got a call from Dimple Kapoor, the head of corporate communications, Piramal Group, who said she had been asked by Ajay Piramal to get in touch with me.

Kapoor asked me to email my questions, which she said would be answered, and SMSed me her email address, following which I emailed her a questionnaire for Ajay Piramal.

Kapoor sent an SMS asking for the email to be sent again, which I did. I then sent her two SMSs, and asked whether she would be sending me a response. 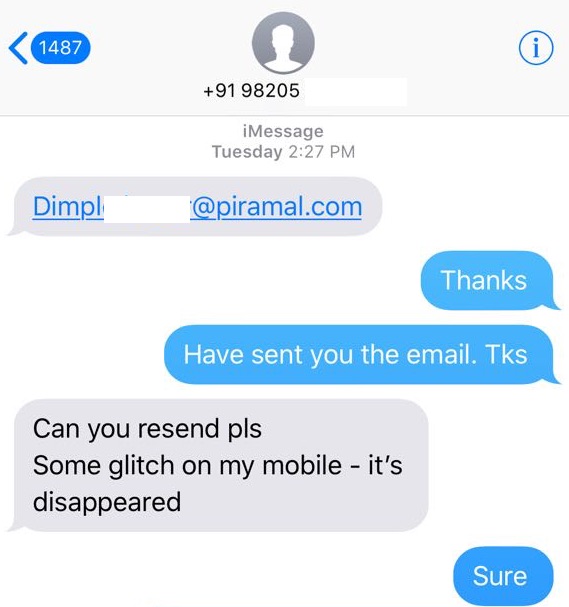 When she did not reply, I sent text messages to Ajay Piramal himself in which I (1) repeated the questionnaire, (2) expressed my hope that he would respond, and (3) said we would proceed with our story but update it with his response as and when it came. 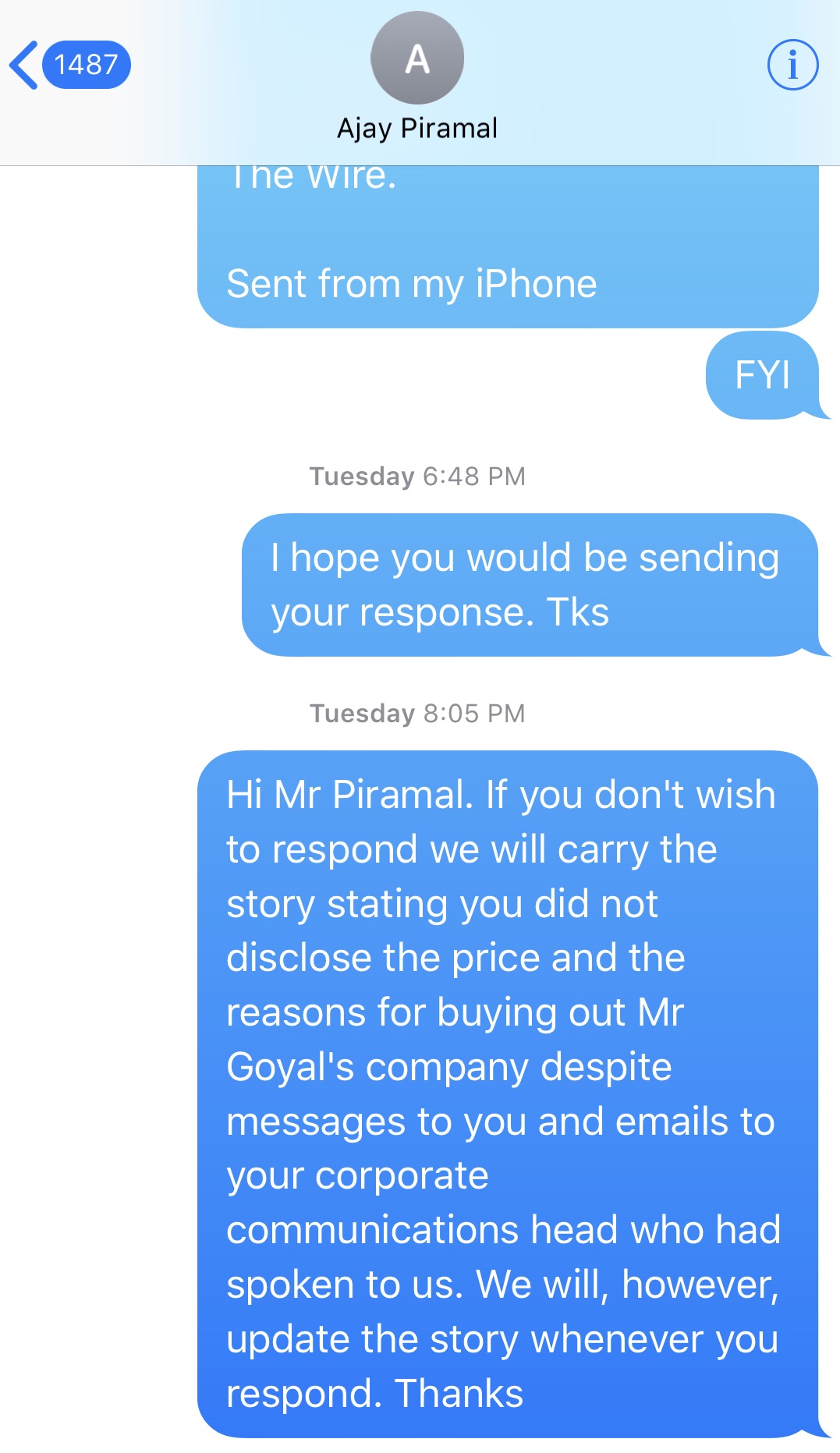 In other words, our questionnaire was sent on April 24 and the story published on April 28. In the intervening four days, the Piramal Group made no attempt to clarify any point, or offer an answer to our questions.

The very first question related to Piramal Estates’s purchase of the shares of Piyush Goyal and Seema Goyal. The transaction date referred to in the questionnaire is “September 2014”. The first question also sought a clarification on the price.

As noted in our story, Flashnet’s filings show the date of transfer of shares as September 29, 2014. Thus, not only does the record of transfer with the ROC indicate September 2014 as the date of transfer, but The Wire had no reason to think the company had made a false declaration and that there was any other date. In any event, the date on which ownership of shares was transferred is incidental to the purport of the story.

Our question regarding the price at which the company was bought remained un-answered. The face value of each share is Rs 10. Going by Piramal Estates’s filings, Flashnet was bought for Rs 48 crore, which works out to approximately Rs.9586/- per share. The Piramal Group now tells us that the valuation of Flashnet was fixed upon the advice of an “independent chartered accountant”. Had they simply responded to our questionnaire, we would surely have carried this explanation, though we might have asked what nature of assessment raised the value of each share about 1000 times – only to end up declaring the net worth of the company by March 2015 to be less than a quarter of that valuation.

Our other questions sought to know the reasons behind the Piramal Group’s decision to buy Flashnet and the nature of the relationship between Ajay Piramal and Piyush Goyal. Finally, we asked for a description from the Piramal Group of its recent forays into the renewable energy and power sectors – which have been widely covered in the media over the past few years and not contradicted by the company.

The Piramal Group returned no explanation to any of these questions.

As for the Piramal Group’s track record, we have no reason to comment on the same and we have not done so.

The Wire responds to the Piramal group statement

The article in The Wire is a factual recitation of the transaction between Piyush Goyal and his erstwhile company, Flashnet, and Piramal Estates Private Limited, based on filings made by the companies themselves. The article raises questions about the propriety of the transaction given Goyal’s status as a minister and makes no allegation against the Piramal group whatsoever.

The public has a right to know about the business dealings of ministers, especially if there is a potential conflict of interest, and it is the responsibility of the media to report about such matters.

From April 24, 2018, every effort was made by Rohini Singh and The Wire to get the Piramal Group to provide its account and explanation of the transaction in question before the article was published. Unfortunately, the company chose not to respond.

As it has finally responded, we have now carried Piramal’s version in full, as we had said earlier.