The bungalow was owned by spouses of two high-profile politicians. 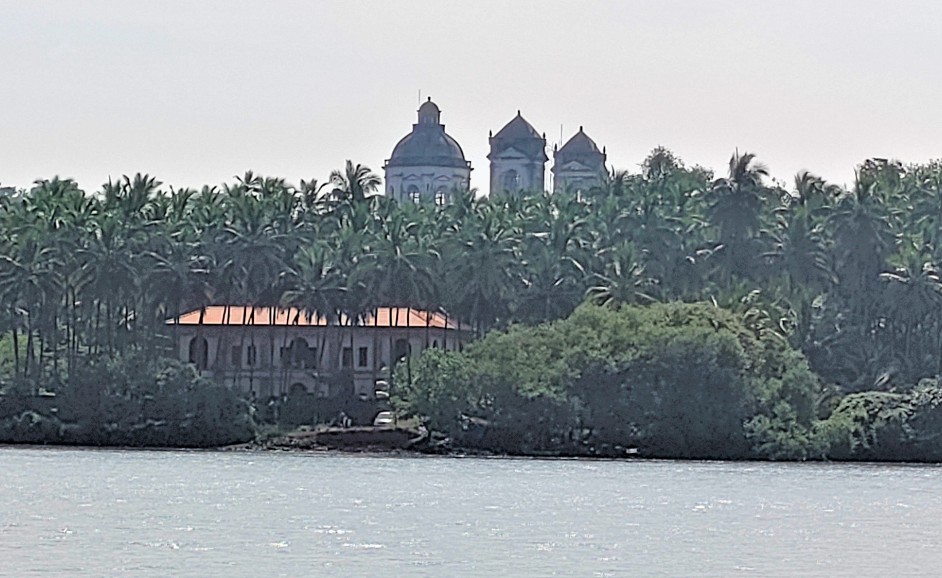 The controversial old Goa bungalow facing the river with the century St Cajetan's Chapel in the background. Photo: Devika Sequeira

Panaji: Faced with legal challenges and mounting public hostility, BJP spokesperson Shaina N.C.’s husband Manish Navratn Munot, co-owner of a huge bungalow that has come up within the protected area (under the Ancient Monuments and Archaeological Sites and Remains Act, 1958) at Old Goa, has quietly pulled out of the project, selling the property to a Mumbai based limited liability partnership (LLP).

Though there were protests even earlier, the construction of the swanky 700 square metre riverside bungalow built on an 11,900 square metre property that fronts the 17th century St Cajetan’s Chapel continued apace.

Speaking from abroad where he is on a business trip, Suraj Lotlikar, the former Goa Forward Party (GFP) treasurer, told The Wire he has sold his share in the project to M/s Corvus Urban Infrastructure LLP. Mumbai builder Munot, who was the co-owner of the property along with Lotlikar’s wife Suvarna Suraj Lotlikar, confirmed he too sold his share to the infrastructure LLP “long back”.

Government documents show both Lotlikar and Munot applied to register the re-sale on August 24 of this year.

The construction of the bungalow within the no-go heritage zone was challenged legally on two occasions, and the case is now before the Supreme Court.

“When the matter went to court a second time, I got fed up and decided to sell my share,” said Lotlikar, who sees himself as “only a small man caught up in an intense media trial” for his involvement in the project with Munot. The latter had previously suggested that the project was receiving undue attention because of his wife’s high-profile designation as a spokesperson for the BJP.

On December 3, Goa’s town and country planning (TCP) minister Chandrakant Kavlekar asked the Old Goa panchayat to take legal action and move to demolish the “illegal structure” in the protected area. In its order, the TCP said technical clearances to the construction were being revoked on grounds that permissions had been “obtained fraudulently and by misrepresentation of fact(s)”.

The final trigger for the government action was the huge public rally in Old Goa on November 21 that saw politicians from across party affiliations line up to pledge support to the Save Old Goa Action Committee, given that state elections are just two months away. Protesters at the public meet on November 21. Photo: Devika Sequeira

“This is nothing but pure politics,” the former state advocate general Carlos Alvares Ferreira said of the government’s knee jerk reaction, pointing out that a unilateral termination would not stand the scrutiny of law. “Even assuming that the construction is at an advanced stage, if discovered that permissions were obtained through fraud, they can be revoked, the consequence of which could result in demolition.” But the government needs to tread with caution and follow proper procedures, he warned.

Another lawyer who did not wish to be named said he foresaw a long-drawn legal battle. “There will now be an appeal against all the orders.”

Coming out publicly for the first time, Goa’s Archbishop Filipe Neri Ferrao also weighed in on the case, telling the government it needed to act against the “obnoxious activities” within the Old Goa heritage zone. The protected area “is not only holy, but a world-renowned heritage”, recognised as such by the Archaeological Survey of India (ASI) and also UNESCO. “Any undue, offensive interventions even by legitimate stakeholders in and around the monuments could attract derecognition of this world heritage status which would be a severe loss to Goa,” he said.

A cluster of seven churches in Old Goa figure in the list of UNESCO world heritage sites. “These seven monuments exerted great influence in the 16th to 18th centuries on the development of architecture, sculpture, and painting by spreading forms of Manueline, Mannerist, and Baroque art and architecture throughout the countries of Asia where Catholic missions were established,” the UN site says.

Munot and Lotlikar acquired the controversial 11,900 sq metre property in May 2015, with Munot buying 9,500 sq metres and Lotlikar’s wife 2,400 sq metres. But the bungalow straddles an area owned by both, according to Lotlikar.

Though the original owners of the land, Jose Maria de Gouveia Pinto, his wife Marie Christine Gouveia Pinto, and his sister Maria Lizette de Abreu Gouveia Pinto sold the land in 2015, all applications for the controversial construction right up to 2019 were made in their names.

“Due to the fact that the property under reference was already sold by you at the time of applying for Technical Clearance, it is quite clear that you could not have obtained the permission in your name and which implies that you have obtained the said permission fraudulently and by misrepresentation of fact, thus attracting the action as stipulated under condition No.2 of the Technical Clearance Order,” the TCP notice to the Gouveia Pintos said.

According to the documents submitted in the apex court, the ASI had pointed out that all that existed on the property was a 54 sq metre hut for storing coconuts. Under protected area laws, the owners could at most apply for repairs to that structure. What’s replacing it currently is a sprawling 700 sq metre bungalow.

Unmoved by the government action, the Save Old Goa Action Committee said its satyagraha would continue till the “physical demolition of the illegal structure”. It also wants the state to notify the demarcation of protected, prohibited and regulated areas on the regional plan.

For the rich and glitzy from Mumbai and Delhi, Old Goa is just another great setting for their next sprawling bungalow. For Goans, it is a site anchored by centuries of history, architecture and the sacred. It is unlikely this fight will be given up easily.