His statement implies that the bribe the ED alleges was paid to Karti Chidambaram was done for an Ambani firm, if Ambani indeed was the owner of the firm, as they claim. And it is not clear what the Modi government's key agency did with this information. 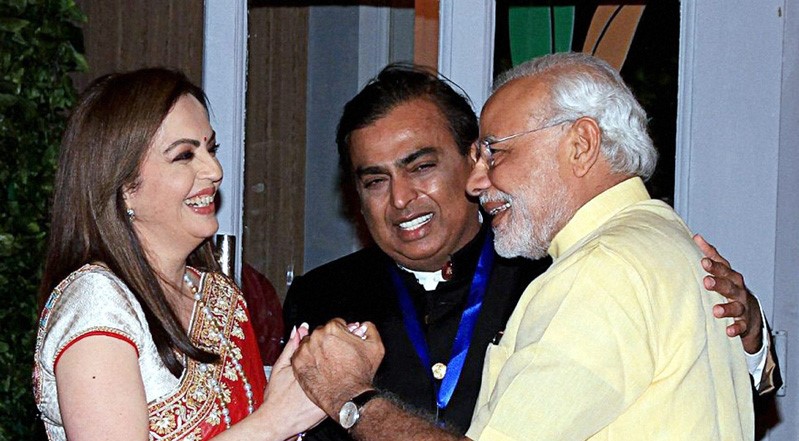 New Delhi: In a startling statement to the Enforcement Directorate, former television executive and prime accused in the INX Media case Peter Mukerjea has claimed that Mukesh Ambani and his ‘family and friends’ owned INX Media, the firm at the centre of a bribery scandal.

Mukerjea is an accused in the case which saw Congress leader and former finance minister P. Chidambaram and his son Karti jailed because of statements given by him and his wife Indrani Mukerjea.

Peter Mukerjea also told the ED that Ambani was in direct touch with Chidambaram and his son and their day-to-day dealings with Reliance was through their executives.

His statement assumes significance because it implies that the bribe the ED alleges was paid to Karti was done for an Ambani firm – if indeed Ambani was the owner of the firm Mukerjea and his wife represented, as Mukerjea told investigators.

The ED is part of the Department of Revenue under the Union finance ministry. Last month, in an unprecedented move, the Modi government gave the agency’s head a one-year extension of tenure.

What is even more surprising is that the ED – which had called Chidambaram and Karti for questioning based on statements of the same accused and had even arrested them – appears not to have even called either Ambani or his associates named for questioning.

ED officials refused to answer any question by The Wire about what action, if any, they had taken regarding Mukesh Ambani following Mukerjea’s 2018 statement.

In the light of Mukerjea’s statement to the agency two years ago, it is not clear whether the ED has taken any steps to verify or authenticate Mukerjea’s statement on the firm’s ownership, or sought to know from Ambani whether he was the owner of the firm and whether he was aware that an alleged bribe was paid to iron out FIPB issues with the firm since Mukerjea claims there were ‘day to day dealings’ with Reliance executives.

The Wire sent a questionnaire to Reliance Industries, seeking information on whether Ambani or the others named were ever summoned by the agency. No response has been received at the time of going to press.

When contacted, Sandeep Thapliyal the ED investigating officer of the case said he is not authorised to speak and that he has been moved out of the case. On being asked whether he had called Ambani or his associates named by Peter and Indran Mukerjea, Thapliyal said only his seniors would be able to answer that question.

Thapliyal’s boss, Mahesh Gupta, also supervising the investigation, said he is not authorised to speak and did not respond on being asked why Ambani was not summoned for questioning.

In his statement, Mukherjee alleged that while he and his wife, Indrani, held 10% sweat equity, 40%  was held by Indrani in “holding capacity” for Mukesh Ambani and his family and friends. Mukherjee also claimed NSR PE, a private equity firm, was a vehicle for Ambani’s friends owned another 20% of the firm. Ambani therefore was the “majority shareholder and investor” in INX media holding close to 60%  of the shares.

Mukerjea also said that Ambani was in “direct touch” with senior politicians like P Chidambaram and his son Karti. He said their day to day dealings with Reliance was through their executives and named L.V. Merchant, Manoj Modi and Anand Jain, all confidantes of Ambani.

The other accused, Indrani, also took Mukesh Ambani’s name in her written statement on the October, 5 2019, given to assistant director Sandeep Thapliyal, where she said it was decided Peter would meet Ambani after FIPB had sent a notice pointing out irregularities in the approval process.

The statements given by the two were described in great detail to The Wire by those familiar with the investigation. It is not clear whether the ED had sought more clarification from the duo on the role of Ambani and whether subsequent statements were given. It is also not clear whether Mukerjea and his wife’s statements on Ambani owning INX are part of the chargesheet filed in the court by the ED in June this year. The court is yet to take cognisance of the chargesheet.

While official “sources” let it be known to reporters that Indrani and Peter Mukerjea had told the agency that the duo had met Chidambaram when he was the finance minister (who had then allegedly told them to help his son with his business), Mukerjea’s allegation that Ambani was the owner of the company being probed and that Indrani was a ‘benami’ for the Reliance owner was never leaked to the media.

The Mukerjea duo alleged Karti had asked them for a bribe of a million dollars when they met him at a hotel in Delhi.

The fact that Ambani was named by the two accused as the actual owner of the company at the centre of a bribery probe and yet was not questioned by the ED while Chidambaram and his son were only displays how the investigative agencies are cherry picking evidence in political cases.

The role of RIL and its associated companies in the INX/NewX Group is a subject that has been raised in the past by the Indian government’s own agencies.

As senior journalist Paranjoy Guha Thakurta has noted, an article that appeared in The Hoot in November 2013 detailed how the Mukerjeas supposedly sold their stake in the INX/NewsX media group of companies and how Reliance Industries “acquired control over these firms for a period of time in a convoluted manner”.

These claims came from a draft report produced by the Serious Fraud Investigation Office (SFIO) which looked into “rather unusual transactions involving companies linked with RIL and Ambani”.

As Thakurta noted in a 2015 article: “The 2013 draft report of the SFIO had revealed that investigations conducted by the Income Tax Department ‘proved beyond doubt that the sale of NewsX channel’ to a company called Indi Media Co Pvt Ltd – by way of subscription of equity to the extent of 92% of INX News Pvt Ltd – was a ‘sham’ transaction and a ‘premeditated plan’ of Reliance Industries to fund the latter corporate entity ‘through its front companies’ employing a ‘web of transactions’.

Page 25 of the SFIO report reportedly notes: “Thus, as the evidence unfolds, the promoter group companies of Reliance advanced funds in the guise of convertible loans only to acquire equity in INX Media and IM Media Pvt Ltd.”

The draft findings of the SFIO, however, did not prompt the UPA-II government to call for further investigation nor did it result in any meaningful outcome in the form of a prosecution.

This isn’t the first time Ambani has been named in a case with political overtones by an accused and not been called for questioning by agencies. In another high profile case – the Agusta Westland case where government agencies claim top opposition leaders received kickbacks – prime accused Christian Michel claimed he was looking for a “bureaucratic and political navigator” for a deal and the person he “recommended” was Mukesh Ambani.