Behind Ahmedabad's Ventilator Controversy, a Backstory of Connections to Top BJP Leaders

The firm, whose ventilators were developed in "10 days" and have proved ineffective on COVID patients, had as one of its promoters the business family that gifted Narendra Modi an expensive monogrammed suit in 2015. 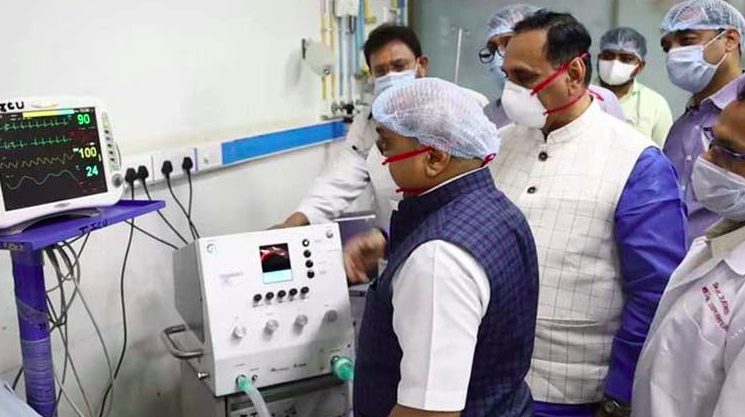 Vijay Rupani at the inauguration of the 'low cost' ventilator. Photo: Twitter

New Delhi: The Narendra Modi government is procuring 5,000 ventilators from a Rajkot-based firm which has already been accused of supplying breathing machines to Ahmedabad’s largest COVID-19 hospital that doctors there say are not up to the mark.

The firm’s current and former promoters have had close associations with top BJP leaders – with at least one business family, The Wire has established, linked to the controversial gift of an expensive suit to Prime Minister Modi.

This procurement is being done through state-run HLL Lifecare, according to Gujarat’s principal health secretary Jayanti Ravi. It is also possible that the purchase is being supported by financial resources provided by the PM Cares Fund, which said earlier this month that it was spending Rs 2,000 crore for the purchase of 50,000 “made in India” ventilators.

Over the last few weeks, a harsh spotlight has been turned on hundreds of ‘Made in India’ ventilators that were supplied free of cost to Ahmedabad civil hospital by Jyoti CNC Automation Ltd, whose chairman-cum-managing director, Parakramsinh Jadeja, is seen in the state as being close to chief minister Vijay Rupani.

As the Ahmedabad Mirror first reported on May 19, these “ventilators” have proved so inadequate when used on COVID-19 patients that the Ahmedabad civil hospital, the largest COVID-19 hospital in the state, was forced to put out an SOS for actual ventilators weeks after taking delivery of Jyoti CNC’s machines.

The machines, called ‘Dhaman-1’, were aggressively promoted by the Gujarat government and marketed as a “glorious achievement”.

On May 18, the Ahmedabad Mirror reported how doctors in the city’s biggest government hospital had told the Gujarat government to urgently order proper ventilators since the ones given by Jyoti CNC were not “showing desired results” on COVID patients. Ahmedabad district has recorded the second highest number of coronavirus deaths in the country at around 600.

The machines, according to the newspaper, were strongly endorsed by Gujarat chief minister Vijay Rupani who claimed this cheap ventilator was designed and produced in 10 days. Rupani’s enthusiasm, however, has not been backed by Gujarat’s government doctors.

“Luckily, until now, we used these ventilators [made by Jyoti CNC] on very few occasions, as high-end ventilators were available with us in enough numbers. Dhaman-1 is not a good replacement for high-end ventilators, but it can be used in dire emergency when you have nothing else at hand,” Civil Hospital head of anaesthesia Shailesh Shah told news agency PTI, and added that with the number of coronavirus patients increasing, it would not be a good idea to depend on the Dhaman-1 units.

So far, 900 of these ventilators have been installed in the state, with 230 alone in the Ahmedabad civil hospital. The opposition Congress has demanded a judicial inquiry into the matter, claiming that the state government intentionally endangered the lives of people by passing off  mechanised ambu bags as ventilators. The party is also asking how many of the over 300 deaths in the hospital were of patients who had been put on these ventilators.

On Friday, a BBC journalist tweeted that his brother in law had died in Ahmedabad’s Civil Hospital and sought to know whether he was put on Dhaman-1.

My jijai died in #Ahmedabad #Civilhospital. I have 3 questions for @CMOGuj 1- Deapite his death in the morning of 16-5, why were we not informed till evening. 2-Was he in Dhaman-1, 3)Who stole phone & watch 4m his body. @PMO @Nitinbhai_Patel @pkumarias @vijayrupanibjp

Ahmedabad Mirror has also reported that these ventilators did not have a license from the Drug Controller General of India and were installed after only one person was tested on it before Rupani launched it on April 5. Both the chief minister and his deputy, Nitin Patel were present when the machine was tested on a patient.

Rupani, the newspaper says, stepped out of his citadel only once during the whole lockdown and that was to inaugurate these machines at the Civil Hospital in Ahmedabad.

After the controversy broke out, the Gujarat government claimed it never described Jyoti CNC’s product as a ventilator but its own press release on the machine referred to it as a “ventilator” nine times and called it a “glorious achievement” which would “add a new feather” to Modi’s “dream campaign of Make in India”.

The hype around these “ventilators” led to some state governments ordering them as part of their COVID-19 preparation measures. On May 20, however, Puducherry chief minister V. Narayanasamy tweeted that his Union Territory was canceling the orders it had given for the Dhaman-1 machines.

Lot of controversy has arisen about the functioning of #Dhaman1 . By-pat mechine from #Gujarat Rajkot.
I discussed with Hon’ble Health Minister, Govt of #Puducherry . We will cancel the order Letter has been sent to them to that effect.

On the same day, May 20, Gujarat health secretary Jayanti Ravi came out in strong defence of the machines, stating they were certified by a Gujarat government laboratory and that the product had fulfilled the parameters for ventilator procurement by the Centre’s high-powered procurement committee.

In remarks made to the press, Ravi noted that a Central government enterprise, HLL Lifecare, has also placed an order for 5,000 machines from Jyoti CNC.

This is presumably part of  a tender process that was kicked off by HLL Lifecare in March 2020 and is possibly being supported by financial resources from the PM Cares Fund, which earmarked over Rs 2,000 crore for the purchase of 50,000 ventilators in May 2020. The Wire was not able to contact anyone at the PM Cares Fund to enquire into which vendors would be supplying the 50,000 ventilators it said it was paying for – a reminder of the fact that a fund run with donations from not just the taxpaying public but also government bodies lacks even basic transparency about its functioning. Attempts to obtain a response from the PMO have also proved fruitless.

Despite the negative feedback of its own doctors, what has made the Gujarat government strongly back Jyoti CNC’s controversial machines and use them in its largest hospital in Ahmedabad? The answer may lie in the political connections between the firm’s original and current promoters and top politicians like chief minister Vijay Rupani and even Prime Minister Narendra Modi, all of which is in the public domain.

“I am happy to announce that an industrialist from Rajkot has been successful in manufacturing ventilators in just 10 days. They designed it, made a prototype, procured parts and successfully built ventilators. Their testing has been done and certification has been completed. It is being used on patients from Saturday,” Rupani was quoted as saying by the Financial Express.

According to Ahmedabad Mirror, Parakramsinh Jadeja, the CMD of Jyoti CNC said the Gujarat CM would call him every day and inspire him.

A few days ago, Rupani also tweeted a thank you message from Jadeja on the Central government’s package for MSMEs.

One of the business families associated with Jyoti CNC, the Viranis, achieved a certain degree of fame – or notoriety – for its most prominent member having controversially gifted Narendra Modi an expensive suit with his name monogrammed all over which he wore for an event with Barack Obama in 2015. The suit was described at the time as a gift from a businessman-admirer and then auctioned to defuse allegations that Modi had developed expensive tastes with the help of corporate friends. 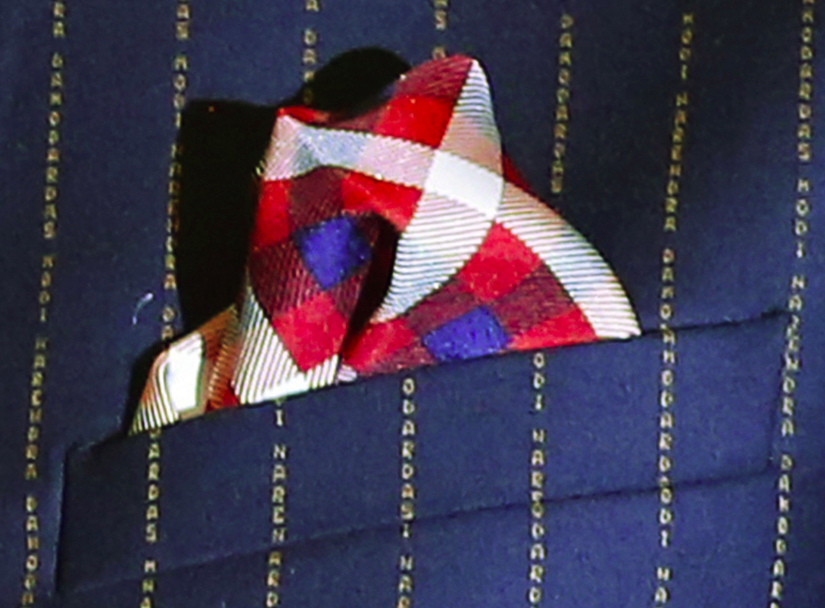 A close up photo of Modi’s monogrammed suit. Photo: Reuters

The businessman, Rameshkumar Bhikhabhai Virani, is part of the Surat-based Virani family, which had a significant financial stake in Jyoti CNC for many years. Company filings from 2003-2004, for example, show Anil Virani and Kishor Virani, both sons of Bhikhabhai Virani, as its two largest shareholders.

The Virani family runs the Karp Group, one of the biggest diamond merchants in the country with operations abroad.

The bandhgala suit that bore Modi’s name — which he had worn during Obama’s visit to Delhi   as the chief guest for Republic Day – had become a major political flashpoint. At the time, Opposition parties had alleged the suit had cost Rs 10 lakh, while Congress leader Rahul Gandhi used the suit to coin the phrase “suit boot ki sarkar” to attack the Modi government.

In several newspaper interviews and chiefly to ANI, Virani claimed he had given the suit to Modi as his “younger brother” and to invite him for the wedding of his son, Smit. Ramesh Virani is also a director in Karp diamond. “My son’s name is Smit Virani. I gave this gift to my elder brother (Modi) on behalf of my son. My son had this idea of making this monogrammed suit. He said he wanted to give a surprise to Modiji,” he told ANI. 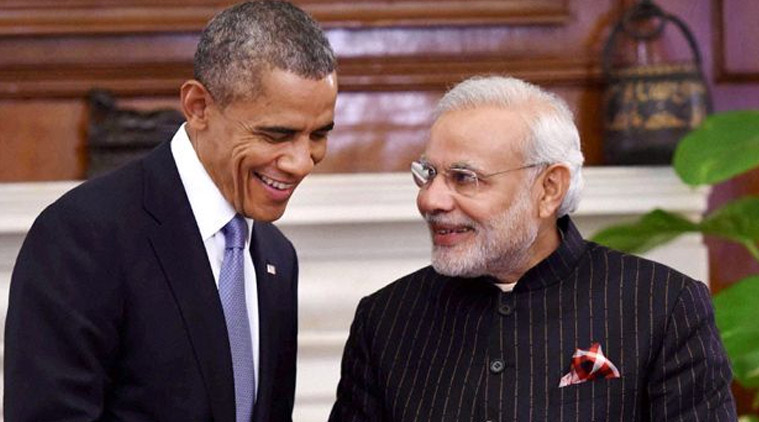 Prime Minister Narendra Modi in the pinstripe suit gifted to him by businessman Ramesh Virani, along with Barack Obama in Delhi. Photo: PTI

Smit Rameshbhai Virani, who thought of the monogrammed suit gift for Modi, had a little over 20% stake in Jyoti CNC as on March 31, 2019, the last date for which filings have been made with the Registrar of Companies, as did Eknath Infracon LLP, a Virani family company. Other major shareholders of the company in FY’19 were the Jadeja family and another company, Jyoti International.

In 2012, when he was chief minister of Gujarat, Modi, according to the Times of India, had flown down to Surat to attend a wedding in the Virani family:

“On the personal invitation by Kishore Virani (Maldar) chairman of KARP Impex, a leading diamond company, Modi attended the marriage ceremony of his niece and nephew. Sources said that a last minute plan was drawn up to make a flying visit to the diamond city by Modi on Tuesday. He (Modi) arrived in the city on Tuesday evening to specially attend the grand wedding ceremony of the diamond baron Pankaj Virani’s son and daughter at the spacious Surat International Exhibition and Convention Centre (SIECC) at Sarsana and flew back to Gandhinagar.”

When contacted, Jadeja, CMD of Jyoti CNC, first told The Wire that the Viranis have a 46.76% stake in the firm. On being asked whether it is the same family that had gifted the controversial monogrammed suit to Modi, Jadeja then claimed the shareholding had been offloaded and said he would send the latest filings.  He hung up saying he was driving.

He later responded to The Wire’s email by stating, “As of today Virani family do not hold any shares”. He said the latest shareholding pattern filings made by Jyoti CNC in February 2020, which showed the Virani stake, pertained to FY’19.

On being asked when the shares were offloaded and to whom, Jadeja did not provide The Wire with a clear answer. He merely stated that he had been driving since 11 PM the night before and that those details were “internal matters” of the Virani family. He also added that he was a “transparent” person and that we will get to know when filings are made.

Jyoti CNC Shareholding (1) by The Wire on Scribd

The Wire also contacted Smit Virani in Hong Kong who said he doesn’t stay in India and declined to comment on his shareholding and association with Jyoti CNC.

Jadeja did not respond to subsequent calls from The Wire, nor did he send across the filing which he claimed he would. He later told The Wire he was going for a two-hour long meeting and cannot speak. He also said his office was shut, like everything else in Rajkot.

Calls and texts to Kishor Virani of Karp group did not evince any response apart from “I am busy. You can text me.”