Before it is eradicated, the novel coronavirus can be tamed, but this will require the rapid implementation of an action plan that is humane, rational – and unafraid of the fiscal beancounters. 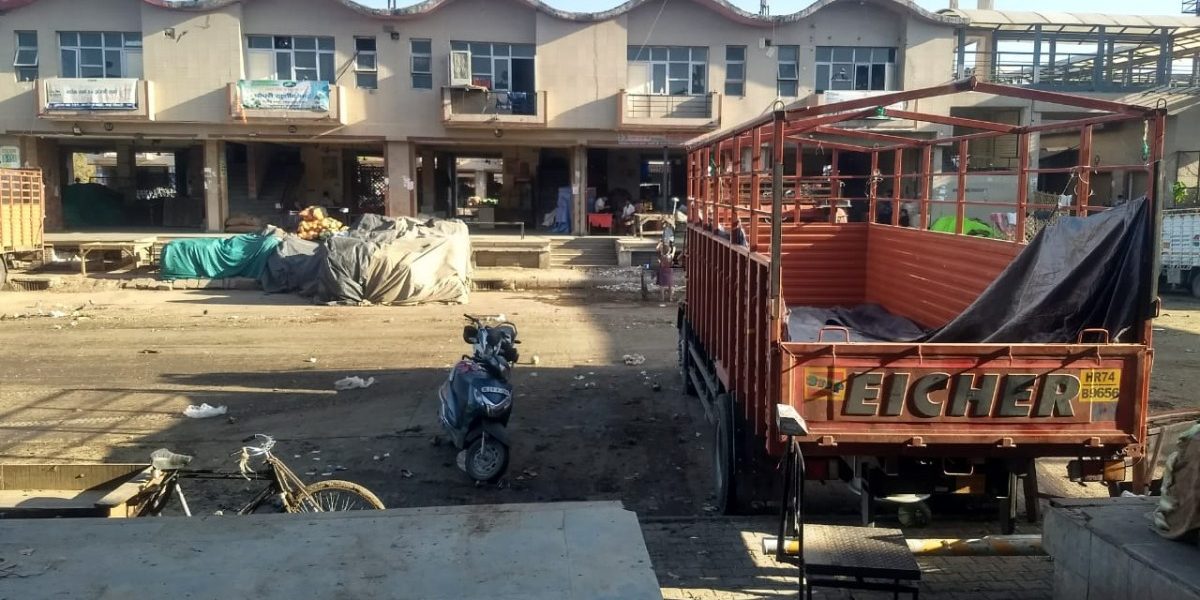 The middle of Ghazipur mandi. Credit: The Wire.

It’s too late. The COVID-19 horse has bolted and closing the barn doors now will not bring it back. Despite Narendra Modi’s all-India lockdown, the number of people testing positive for the virus has risen sharply during the past 10 days,  from 200 in three days to 200 in a single day.

Much of this increase is the result of more intensive testing following the discovery of COVID-19 “hotspots” such as the Tablighi Jamaat centre in Nizamuddin, where a large number of preachers (including at least 250 persons from abroad) had gathered in the first two weeks of March when even foreign travel restrictions had not yet been announced.

But the real nightmare is only just beginning. For one, crucial failure of planning and foresight in the lockdown has already sent tens of thousands of migrant workers struggling back to their home villages. This marked the failure of both the Central and state governments to understand that to keep the workers in the cities throughout the duration of the lockdown, their employers needed to be compensated for the near total loss of business they would suffer. Only then would the government have acquire the moral right to prosecute those employers and landlords who failed, or refused, to keep their workers housed and fed during this time of trial.

Today, migrant workers who have been thrown to the wolves in the towns are  streaming into their home villages and hamlets by the tens of thousands every day. State governments are scrambling to regulate their return, testing and then clearing or quarantining them. But the tests they are using, mainly the temperature test, can only catch those who already have the symptoms. As many more will still be in the asymptomatic stage. Since social distancing is almost impossible within a family, those carrying the virus of them will unknowingly infect others.

In his NDTV Town Hall Programme on COVID-19 some days ago, Prannoy Roy had pointed out that the infection ratio can vary from as low as four or five to 1, with rigorous social distancing, to as high as 400 to 1 without it. The cases of the Sikh preacher who visited Anandpur sahib and at least 15 villages after returning from Europe, and the Tablighi Jamaat gathering in Nizamuddin show that the infection rate from those whom the government is not able to identify and quarantine  could average between 100 and 200 to 1.

Mobilising more health workers, such as doctors and nurses in training, and creating more and more monitoring centres, can only take us so far. This is for a reason that we haven’t factored in as yet – the absence of biohazard suits, or kits for them to work with. While the state governments have given a great deal of encouragement to increasing the supply of beds and ventilators for patients, they have said very little about the need to increase the supply of biohazard suits and kits.

But as the experience of other countries is showing, doctors and nurses are the people in greatest danger of infection. If they start falling sick and dying, the stream of health volunteers will dry up. Finance minister Nirmala Sitharaman has announced a massively generous insurance policy for health workers. But that only guarantees good treatment after they have contracted the disease, and does nothing to prevent them from doing so.

It is therefore time to face the fact squarely that there is now no way of preventing India from entering stage three of the spread of COVID-19 —community transmission — in which the health establishment will  lose track of the spread of the disease. In fact,  Dr Girdhar Gyani, the convenor of a task force on COVID-19 hospitals,  said as much on March 28, barely four days into the 21 day lockdown. So today, even as health workers continue the fight to contain its spread, the government must start fashioning its response to stage 3.

The very first thing needed is a shift in the goal of strategy from the eradication of   the virus, to taming it. The standard way of doing this – through vaccination – is not available because no vaccine has been developed as yet. The alternative – in fact the only strategy that remains – is to tame it. Fortunately, COVID-19 has characteristics that make this possible.

Yes, we can tame the virus

A strategy for taming the virus needs to be based upon the following four factual pillars:

First, COVID-19 is aerosol and spittle borne and not, like the Spanish ‘flu, airborne. So wearing a mask, frequently washing ones hands with soap, and avoiding touching one’s mouth, nose and eyes will go a long way towards checking its spread. Thanks to mobile telephony and the social media, this is now known to virtually every inhabitant of the country.

Second, the mortality rate is relatively low.  According to the WHO, it began by being 2 percent in China and rose to 3.4 percent for the world as a whole at the end of last month. The organisation has cautioned, however, that this is almost certainly an inflated figure because most nations have not been able to track down and include the many who have contracted the disease and recovered without knowing they ever had it. In India, the current rate is 2.8%, but that too is almost certainly inflated for the same reason.

Third, COVID-19 is dangerous only to the old and very old. All, repeat all, the data gathered from more than more than three quarters of a million cases around the world, shows that very, very few people below the age of 60 have died if they have not already been suffering from a pre-disposing ailment. The death rate climbs to 8% for those between 60 and 70 and to 14% in those above 80. But the principal reason for this is again the much greater incidence of diabetes, hypertension and chronic gastro-intestinal and pulmonary diseases – the most obvious  being smoking – among the older generation of the world’s inhabitants.

Fourth and last, 80% or more of those who contract the disease recover on their own, many without knowing they ever had it. Needless to say, the vast majority of those who do so are young and very young. This has enormously important implications for policy. The first and most important is that the migrant workers who are trekking homewards are all young. What is more, hard work has made them very fit. Thus, they may starve to death or die of heatstroke, but they shall not die of COVID-19.

However, since some of them may be carriers of the disease, and their parents are old, it is imperative that they maintain a substantial  social distance from their families and others in the village for the required fortnight till the risk of their infecting others ends.

But social distancing does not mean that they cannot work and must sit, fretting, in their homes. Nowhere is safer in a village than the open fields, and that is where a bumper paddy crop and and a plethora  of fruit and vegetables are  waiting to be harvested. The returning migrants can not only help to bring these in more quickly, but earn some of the income they were forced to forego because of the lockdown.

Needed, a humane action plan for the countryside…

Here, therefore is the skeleton of a policy to contain the spread of COVID in the rural areas in a humane way:

1. Quarantine the returning migrants for 15 days, then encourage them to look for work;

2. Keep the mandis open, but allow access only those under 50 to work in, or even enter them, and let the returned migrants take their place while the government compensates them for their loss.

3. For those who begin to show signs of being infected, open camps where they can rest, and get the food, water and medicines that ease the symptoms and help them to conserve their strength.

4. As for intensive monitoring and medical care, it is not the returning migrant workers that require the sustained attention of the local government, but their parents, and in a limited number of cases their children, nephews and nieces. These are the vulnerable groups on whom every block, anchal and village administration, every primary health centre and every district hospital must focus its attention.

What are the numbers we are looking at? In 2016, the population above the age of 65 numbered just about 60 million. According to the 2001 census, there were 593,731 inhabited villages in the country. Assuming that the number is now a little over 600,000, the local authorities will need to keep a close watch on the health of around 100 persons in each village. That cannot be difficult to do.

… And an efficient plan for towns and cities

A similar program needs to be put in place in the towns and cities as well. When the present lockdown ends, shops should be allowed to open provided all of them  maintain a  ‘social’ distance between staff and customers, as shops selling food and medicines are doing today.

Small and medium sized enterprises in the manufacturing and  service sectors, capital-intensive enterprises such as airlines, bus transport companies and centrally air conditioned shopping malls, theatres and hotels, will need to be kept closed for a good bit longer as the risk of transmission in them is particularly high. To make sure that they don’t become insolvent and incapable of revival when the threat from COVID wanes, they will need to have their fixed costs – interest and amortisation of debt, rent and maintenance costs – reimbursed.

The money for this will have to come from public funds just as the money for rehabilitation after an earthquake, a cyclone or a tsunami does. The Central and state governments will need to keep this expenditure out of their regular budgets for its purpose will not be to add to the purchasing power in the economy but prevent the existing purchasing power and therefore the economy itself from evaporating. What the bean counter in the government must remember is that if the government fails to do so, its revenues will shrink drastically in the next accounting period and the budget deficit will increase dramatically instead of remaining contained or growing smaller.

All things considered, it is difficult to see life returning to normal for many months, possibly for as long as a year. By that time, COVID-19 will have worked its way through much of the working population, and immunized a large part of it to future attacks. A year is also the time it might take to develop and mass produce the vaccine against it that every pharmaceutical company is straining every nerve to do.

To sum up, therefore, there is no need for the panic that relentless media reporting has thrown much of the country into, but there is also no silver bullet for ending the threat from the coronavirus . All we can do is resume our normal lives as soon as the government has geared up the nation’s health infrastructure  to facilitate early detection and treatment, and to  exercise an extra amount of care and vigilance against exposing ourselves to the disease in our daily lives.