Electoral Bonds Are a Threat to Indian Democracy 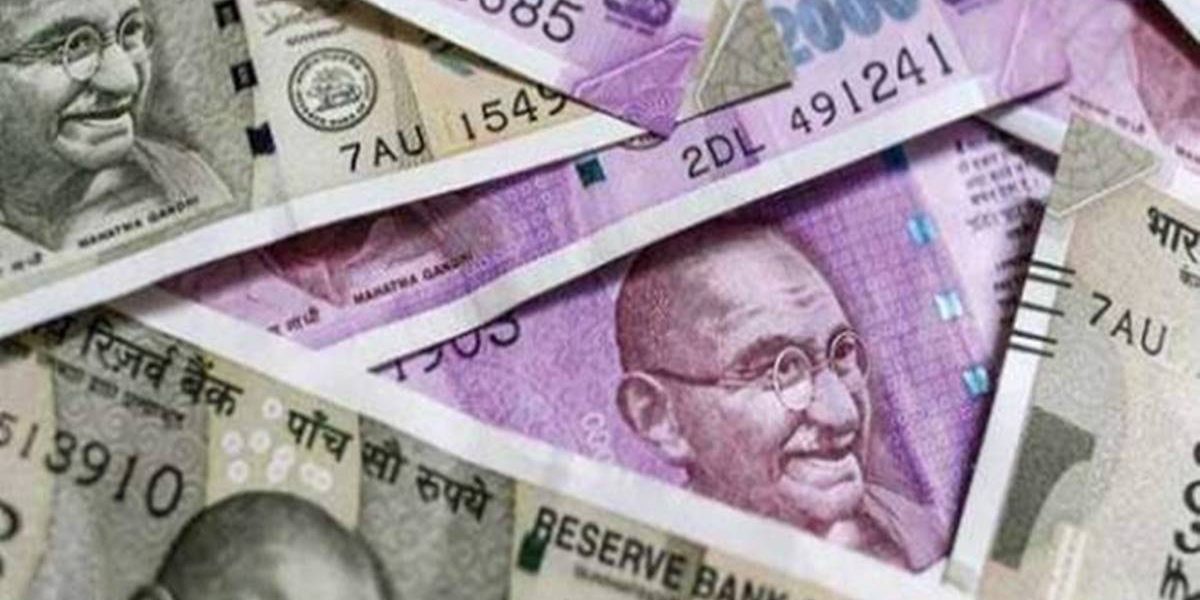 “We can have democracy in this country, or we can have great wealth concentrated in the hands of a few, but we cannot have both,” American Supreme Court judge Justice Louis Brandeis wrote once. The growth of economic inequality fuels the growth of political inequalities and vice versa, resulting in a dangerous vicious cycle.

Democracy across the world is being undermined by money, most worryingly so in India. With the introduction of electoral bonds, India is currently the most unregulated country with regards to electoral funding in comparison with other similar democracies. The greater the inequality of political funding, the greater the chances that public policy is tilted towards the interest of the super rich, ignoring the interests of the majority, particularly the poor and the vulnerable.

Why electoral regulation is a must

As elections become more expensive, politicians become more dependent on electoral donations. This dependence of the political class on the rich for political funding has skewed elections in favour of the top 0.1% of the population.

According to Robert Dahl, the fundamental characteristic of democracy is “the continuing responsiveness of the government to the preferences of its citizens, considered as political equals.” However, growing inequality and dependence on the super rich for political funding make their votes much more powerful than those of the rest of the population; democracy is no longer ‘one person one vote’ but rather ‘one dollar one vote’.

There is a clear relationship between a country’s policy on electoral donations and the public policy decisions made. For example, Germany remains the only country in the EU that has not banned outdoor smoking advertisements by cigarette companies. Why? Because it’s the only country where all political parties receive a good amount of funding from cigarette companies.

Another example can be found in the United States: The share of the super rich (0.01% of the American population) in electoral contributions increased from 15% in the 1980s to 40% in 2016. The same period saw a significant decrease in the annual incomes of the bottom 50% of the American population as well as a significant reduction in corporate taxes.

Similarly, Loukas Karabarbounis of the University of Chicago, in his paper ‘One dollar, one vote‘, compared Organisation for Economic Co-operation and Development (OECD) countries for differences in the Gini index (which measures the degree of inequality in the distribution of wealth) and found a correlation between countries’ unrestrained electoral funding and high inequality.

If you think this is bad, wait for the data on India

Recently, Yasmine Bekkouche and Julia Cagé (2018), based on extensive research on electoral funding, concluded that there is a direct correlation between electoral spending and electoral success. The same paper also identified that the cost of one vote in France in the parliamentary and municipality elections stood at six Euros and 36 Euros respectively.

European countries such as France and Belgium have curtailed private spending on elections through a series of legislations since the 1990s, thereby successfully negating the influence of the super rich in elections. In fact, France banned all forms of corporate funding in 1995 and capped individual donations at 6,000 Euros. 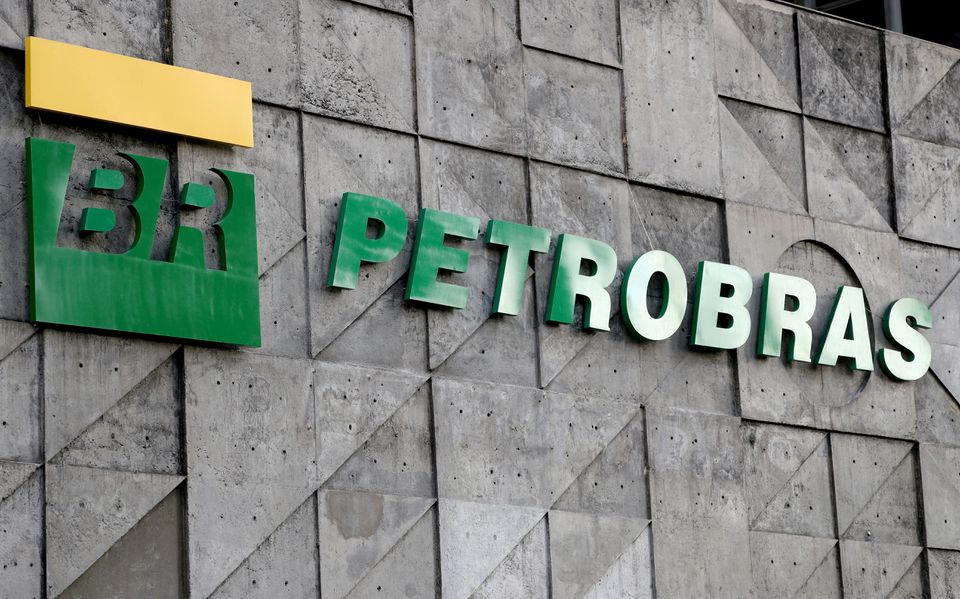 What are electoral bonds?

While more and more OECD countries are bringing about strong electoral funding regulations and bans on corporate funding, India under Modi is going decades backwards.

Electoral bonds were introduced through the Union budget in 2017 and allowed corporates, in India or abroad, to anonymously donate a theoretically infinite amount of money to political parties (the fact that the only party that has gained from this system is Modi’s BJP is another matter.)

Electoral bonds lead to information asymmetry; only the ruling government has information on who lends and to whom, leading to issues of moral hazard and adverse selection. Before electoral bonds were introduced, it was mandatory for political parties to make public all donations above Rs 20,000 and no corporate company was allowed to make donations amounting to more than 10% of their total revenue. The introduction of electoral bonds not only increased the number of anonymous donors, but also the number of shell companies donating to political parties. 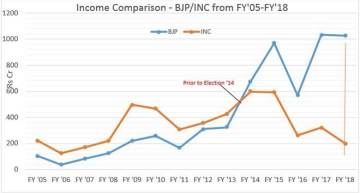 There are only 7,500 companies with a turnover of more than Rs 500 crore. If 92% of bonds cashed are multiples of one crore bonds, one can easily infer that it’s just a few thousand corporates that are funding the majority of the BJPs donations. 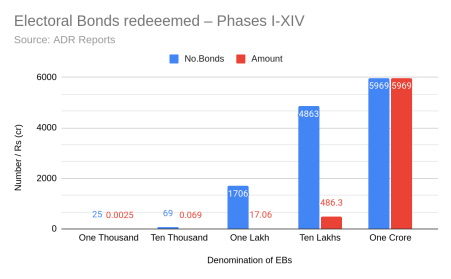 A breakup of the denominations of electoral bonds redeemed from phases 1-14. Source: ADR reports.

When the BJP receives most of its electoral donations from several thousand corporates, will its focus be on doing broader public good or on taking care of the interests of the super rich corporates?

The most profound example of the same would be the reduction of corporate taxes since 2017 and the simultaneous, gradual increase of fuel taxes. Indians, along with Pakistanis spent, on average, 17% of their total income on fuel before the recently reduced fuel tax; the highest in the world by far. At the same time, corporate tax eshave, since 2017, been reduced from 35% to 23%; among the lowest in the developing world. 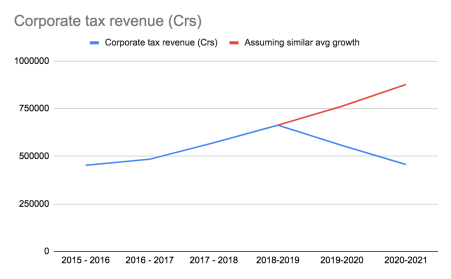 Assuming a similar growth of corporate tax revenue as previous years (~15%), the Union government, by reducing corporate taxes, has missed out on a potential revenue of Rs 6.27 lakh crore in the last two fiscal years (2019-20, 2020-21).

This reduction in corporate taxes over the years raises concerns of a potential case of ‘returning the favour’ to the corporates for their anonymous donations to the ruling party; the entire process enabled by electoral bonds (Bethanavel Kuppusamy).

This not only calls attention to a weakening democracy but also highlights the dire situation of the Indian economy, which affects the common people more than the affluent sections. Other examples of corporate influence would be the monetisation of public assets – where extremely lucrative Indian assets are given away at a throw away price, at a loss to the exchequer – or the passing of the widely criticised farm bills.

The danger with the Indian system is that, as the rich use their political power more and more to cement their interests, we become more and more likely to move away from democracy and towards plutocracy. This is because the interests of the super rich are directly in conflict with the interests of the poor. As the poor are increasingly left out of the electoral process, they become disillusioned and slowly move away from it entirely.

The equality of all citizens in the funding of elections is the first step to save India’s democracy. The Union government should, therefore, immediately ban all forms of corporate donations, including electoral bonds. French political scientist Cagé in her book The Price of Inequality proposed “democratic equality vouchers” whereby each citizen can anonymously donate a fixed amount, let’s say Rs 1,000, yearly to the political party of their choice. This Rs 1,000 should be reimbursed to citizens.

The second step would be to introduce the public funding of elections whereby each candidate who receives more than 5% of the votes is partly reimbursed for their electoral expenditure. Currently, the rich corporates who contribute to electoral funding are reimbursed via income tax rebates, thereby making the common public pay for the electoral preferences of the super rich. This lost tax revenue could partly make up for the democratic equality vouchers and the public funding of elections.

The third and arguably foremost measure would be to control individual spending in elections. Though the Election Commission of India (ECI) has set a limit of Rs 75 lakh per candidate, such limits are often exceeded. Therefore, the ECI should reinvent itself and make sure that such limits are respected by contesting candidates.

Unless India reinvents its political funding and spending regulations, she is not a true democracy. For India to be true democracy, the dictum of ‘one person one vote’ must be reinstated in favour of the current ‘one Rupee one vote’ regime.

Dharanidharan Sivagnanaselvam is an alumnus of the University of Oxford and the Paris Institute of Political Studies (Sciences Po, Paris). He is an executive coordinator at Dravidian Professionals Forum and co-founder of the Oxford Policy Advisory Group.