New books by Urijit Patel and Viral Acharya have documented the BJP government's discomfort with the insolvency and bankruptcy code. The real story, however, is how the process was played to save chosen corporates from defaulting. Such attention has been long overdue. If crony capitalism under the Congress-led United Progressive Alliance was characterised by scams like captive coal block allocation where undeserving companies landed coal blocks, it reveals itself under the BJP through the party’s careful extrication of some business groups from the bankruptcy process while letting others get possessed and sold by banks.

The case of thermal power projects

By 2018, almost 34 thermal power plants across India were staring at the prospect of facing bankruptcy proceedings.

A third set of companies defaulted for other reasons. A power plant run by a well-regarded business group in North India fell short on working capital due to delays in government permissions and delivery of plant machinery. Its attempts to recast the loan – by swapping debt with equity, and getting a fresh investor to infuse capital into the project – were shot down by banks. By the end of 2018, taking over the project, banks began looking for buyers.

It’s instructive to compare the experience of that power project with three others – of Tata, Adani and Essar. The BJP stepped into to extricate these, all running on imported coal, from bankruptcy courts. In 2010, having signed low-priced power purchase agreements (PPAs) from state discoms of Gujarat, Rajasthan, Maharashtra, Punjab and Haryana, these units demanded tariff revisions saying a price hike in Indonesian coal prices necessitated one.

The matter went all the way to the Supreme Court which, in April 2017, said compensatory tariffs wouldn’t be allowed. In June, even though the Department of Revenue Intelligence had flagged over-invoicing of imported coal by Adani and others, the Union Ministry of Power called a meeting to “discuss options for resolving the financial distress being faced by the three generators and also consequently resolve the potential insolvency threat faced by the lenders”. 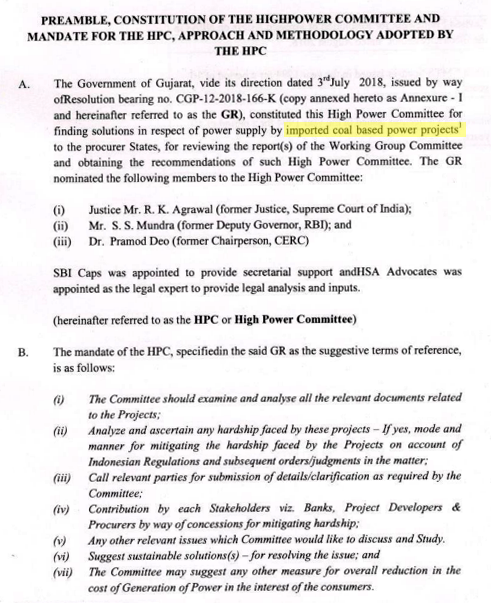 The accompanying footnote, however, makes it clear only three projects are being considered: Adani Mundra, Tata Mundra and Essar Salaya.

In October 2018, the committee recommended tariffs be hiked. Even as the CERC was evaluating the report, Gujarat accepted it and allowed higher coal costs to be passed on to consumers. In July 2020, when the price of Indonesian coal had fallen, the Gujarat government reversed its earlier order allowing power tariffs to be linked to that price, effectively allowing these companies to withhold the benefit of cheaper coal from consumers.

How does one understand this? By the end of 2018, India had no less than 2,511 companies facing insolvency proceedings – 34 of them stranded power projects. A successful legal challenge gave the sector some temporary cover from a RBI circular that would have otherwise mandated bankruptcy proceedings. Eventually, for some power plants, relief came in the form of PPAs with state discoms; another set were given coal-linkages. A third cohort, however, ended up on the selling block.

The curious instance of Essar Oil

The deal surprised observers. On one hand, Vankor had hit peak production. Its output declined from 22 million tons of oil (2014) to 17.6 million tons (2017) and was expected to touch 13 million tons (2020). Compounding matters, in 2014, the US and Europe had slapped economic sanctions on Russia for its military actions in Ukraine. “The Indian purchase looked very unusual for Russian observers because the buyers definitely overpaid and because the purchase was done in the situation of sanctions,” Lilia Shevtsova, an associate fellow with the Russia and Eurasia programme at Chatham House, a policy institute based in London, told me at the time. China, she added, had been the first bidder and it refused the purchase.

In the second asymmetric deal, Rosneft overpaid for Essar’s oil refinery. In 2015, it had valued Essar’s oil refinery, port and related assets at Rs 34,200 crore. At that time, Essar had valued its oil business (not including the port) at Rs 54,000 crore. Now, Rosneft paid Rs 72,800 crore for the refinery and its fuel pump network in Gujarat. It paid another Rs 13,300 crore for the adjacent Vadinar port and related infrastructure. The deal, as Mint reported, valued Essar Oil at 12.5 times Ebitda (earnings before interest, tax, depreciation and amortization). The comparable number for Reliance Industries’s refining business, at that time, stood at seven times Ebitda.

In both these deals, Prime Minister Narendra Modi was involved. The final decision on the price Indian oilcos paid for Rosneft’s oilfields was taken, not by them, but by the Cabinet Committee on Economic Affairs, which is chaired by him. The Essar deal, too, was signed on the sidelines of a Putin-Modi meeting. As a report published in October 2016 by Kotak Institutional Equities, said: “The formal announcement of the deal in the recent BRICS summit in the presence of the political leaders of India and Russia suggests a high degree of involvement of the Indian government in the transaction.”

By the end, not only had Rosneft accessed the India market, its losses from overpayment were offset by the $6 billion it made from the sale of its oilfields (Vankor and an oil subsidary called TNYGD) to Indian public sector companies. As for Essar, which had been struggling to make interest payments on loans, it made a packet instead of losing its refinery to bankruptcy proceedings.

A part of this adventure, however, was capitalised by Indian oilcos.

Crony capitalism under the BJP

The costs of such selective bailouts run deeper than those of the coal scam.

In the latter, almost half of India’s coal reserves slipped into the hands of a few dozen business families – which pushed India closer towards an oligarchic future. Now, with its selective bailouts, the BJP is creating even greater concentration of economic power.

This is very palpable from India’s ongoing bankruptcy proceedings. On one hand, stringent norms – a banker’s solution to the complex socio-economic problem of stranded assets – are pushing many companies into bankruptcy. In 2018, the number of companies facing liquidation stood at 2,511. To put that number in perspective, no more than 7,000 companies in India have a top line over Rs 250 crore.

These companies have been pushed into bankruptcy proceedings at a time when few firms have the cash needed to buy them. That is partly due to the slowing economy. And partly due to unequal access to cash. The thermal power project forced into liquidation couldn’t raise a working capital loan even though it had a dependable fuel supply and a PPA. In contrast, groups perceived as close to the government continue to secure funds despite their strained financials.

The outcome is one where some firms cannot extricate themselves from bankruptcy proceedings – while others elude it effortlessly. Between these two processes, India is seeing nothing less than the single-biggest change in ownership over India Inc till date.

A handful of global funds (sovereign, pension and venture funds), global firms (like Arcelor-Mittal and Rosneft) and six or seven Indian business groups are buying most of the stranded assets up for sale. The others are being sold for scrap.

India, essentially, needs to update its definitions of crony capitalism. Given the funding compulsions of Indian politics, crony capitalism will remain. All that will change is the mechanism through which some firms get favoured.