Fifteenth Finance Commission and the Muddied Financial Response to COVID-19

Criteria formulated by the commission before the current crisis ended up deciding how much money each state got from the SDMRF. 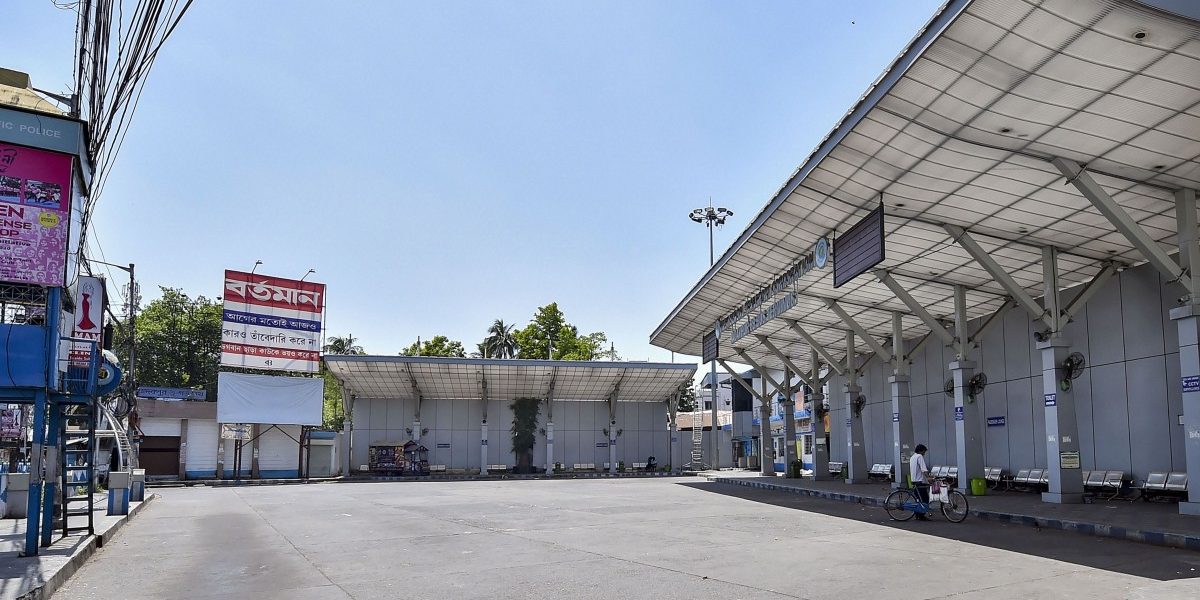 An empty street in Kolkata during the national lockdown. Photo: PTI

On March 14, the Ministry of Home Affairs declared COVID-19 a notified disaster. This meant state governments could draw from the State Disaster Risk Management Fund (SDRMF) for relief measures during lockdown. It’s a useful announcement by any yardstick, given states are desperately short of funds. The devil, however, as always, is in the details.

If one looks at how much each state was eventually allotted under the SDRMF to fight COVID-19 and the aftereffects of the lockdowns, Kerala, one of the worst-affected states, got a mere Rs 157 crore. At the other end, Maharashtra got Rs 1,611 crore.

How did this happen? After all, one purpose of fund disbursal, according to the MHA circular, is for states to also help migrants. Kerala is a state that has a large migrant population. Odisha, a state with far fewer confirmed cases and migrants, was allotted Rs 802 crore, that’s 5x of Kerala’s allocation. To understand the problems and reasoning behind these allocations, it’s useful to look at both the actual allocation for each state and the confirmed cases in that state (as of April 4), together.

If we wanted an even starker way of looking at this allocation, it’s useful to look at the allocation for each state on a per confirmed COVID-19 case. The severity of this pandemic is measured, at least in some ways, by looking at how many people have been infected thus far. So, if all other things are equal, it’s fair to assume, there should be some parity in the funds allocated per infected patient across states. Even if there’s disparity, as it happens in a diverse country, one’d expect the numbers to be in the same ballpark. Except, these allocations are so off the charts that one is tempted to quote Jules from Pulp Fiction to say, “they ain’t even the same sport.”

Kerala gets Rs 53 lakh per patient while Odisha gets some Rs 160 crore**. The southern states get the least allocation when measured thus.

To understand the allocations this time for the COVID-19 crisis, one needs to look at the absolute numbers and the ratios that were suggested for this fund by the 15th Finance Commission when its report was tabled in Parliament along with the Budget earlier this year.

The total SDRMF allocation for the year 2020-21 is Rs 28,983 crore. The current release for the COVID-19 response is Rs 11,092 crore; this amount is divided in the ratio recommended by the 15th Finance Commission. The fund’s allocation formula was tweaked and a new structure was recommended by the 15th Finance Commission before the COVID-19 crisis. Its results, in this context, are strange, tending to the absurd.

Kerala, as one can see, is just above Arunachal Pradesh in terms of actual allocation. In absolute terms, the state has an allocation that’s less than several states which are both geographically smaller and have fewer people. Furthermore, Maharashtra corners the lion’s share in absolute terms. As do states like Odisha, Madhya Pradesh and Rajasthan.

To understand how this allocation works, one needs to read the Annexure 6.2 of the report of the 15th Finance Commission. Buried there is the detail on how this calculation works. Firstly they take the previous expenditures of the states under SDRF. They adjust this for inflation. Call it ‘AE’.

Then, add the parameters of area (call this ‘A’) of the state and its population (call this ‘P’). Call the sum of these weighted terms, with ‘A’ and ‘P’ getting 15% weights each while ‘AE’ gets 70% weight, ‘W’. This value ‘W’ is then multiplied by something called the Disaster Risk Index (DRI); call this new value ‘Y’. Take that value, and add this again to W!***

Why this formula was chosen is something that is not explained in detail in the report. How this’d work is also not explained. Why the factors for population and area were added and how the weights were arrived at is also not explained; unless the declarations that these are good things to add counts as an explanation.

The DRI appears to be another arbitrarily constructed index with no real explanation on how the weights for various natural disasters were arrived at. 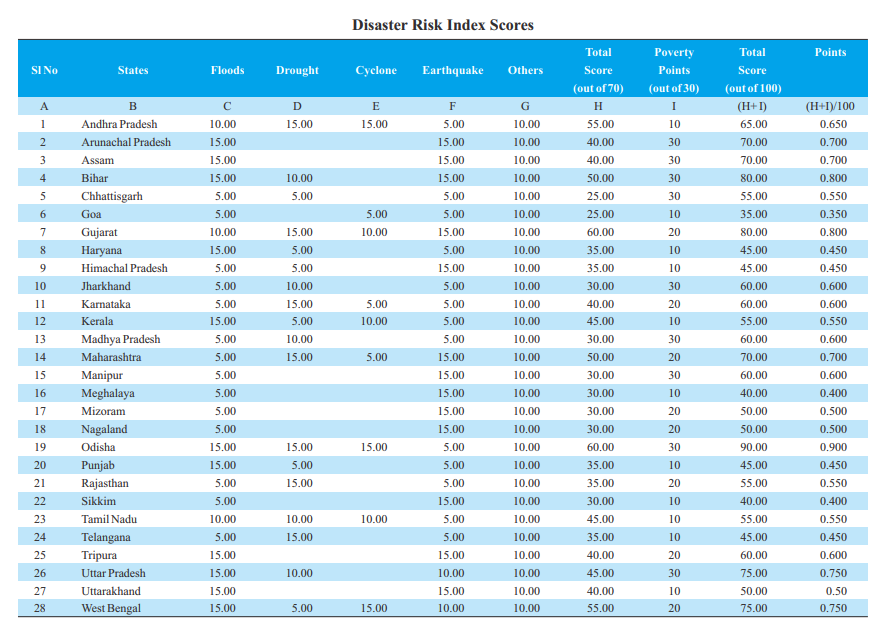 The problem here is that the commission’s formulas don’t apply well to the COVID-19 context. Not only do they not pass the smell test, they throw up allocations that are absurd. Any reasonable set of individuals who came up with an arbitrary formula, let alone the Finance Commission of the country, will look at the results of their own formula. If it looks wrong, it’s probably wrong. The only thing to do at that point is to try and come up with a better version. As some Opposition leaders have suggested, new parameters for disbursal of funds in the COVID-19 context could have been considered by the Centre when disbursing funds.

The parameter ‘AE’ above, which is an indication of how much the past disasters caused the states to draw from the SDRF is a wrong measure on many counts in the first place. No state thinks of the SDRF withdrawal as the only measure of the extent of any calamity. And if the state had a poor allocation in the first place, it’s not as if the state can overdraw to change it next time, which is what the formula above expects. Then, to arrive at population and area metrics, the state of Maharashtra is arbitrarily chosen as a reference. This works in Maharashtra’s favour; it has the highest allocation therefore. It however negatively impacts states that are unlike Maharashtra. The SDRMF as a common pool exists so that the country can come to the assistance of any state in times of disaster. The COVID-19 crisis is a global pandemic and thus a state targeted fund isn’t serving that purpose well. But even then, it’s odd how arbitrary and maddeningly frustrating India’s resource allocation rationale is.

States already haven’t received GST dues from the Centre to the tune of some Rs 40,000 crore. The states of Punjab, West Bengal and Kerala have already been vociferous about this; they have even threatened to take the central government to court. And then there’s the revenue deficit grant that the central government arbitrarily slashed. The 15th Finance Commission recommended revenue deficit grants of Rs 74,340 crore for all states combined. The Budget allocated only Rs 30,000 crore towards this. That’s another Rs 44,340 crore that should have gone to the states but hasn’t.

State governments are responsible for law enforcement, health, sanitation and PDS. These are exactly the areas where governance is needed as a response to COVID-19. The Centre’s reluctance to acknowledge that its powers are limited and the pandemic requires a robust state level response has possibly hampered its acquiescence in terms of funds transfer. It also comes as no surprise, sadly. The central government, if the Prime Minister’s flagship programs are anything to go by, has sought a greater role in the everyday lives of people.

Politicians see this as a way to both accrue power and possibly as their responsibility, given they run on these promises during elections.

India’s response to this pandemic is going to add another chapter in the already fraught Centre-State relations.

** Data for confirmed COVID-19 cases per state as reported by the Ministry of Health and Family Welfare on April 4, 2020.