The leading Kannada writer Devanoora Mahadeva remembers Shetty's ideals of public-spirited journalism and contrasts it with the state of the media, and society at large, today

The following is a translation of the speech delivered in Kannada on the occasion of the release a book titled, Bereye Maatu, a compilation of articles by the late Vaddarse Raghurama Shetty. Shetty was the legendary editor of Mungaru, a reader-owned Kannada newspaper published from Mangalore in the 1980s.

I have not been going out much these days. My health is failing. Yet, I have come here. There is a reason for it.

I had known Raghurama Shetty from his Prajavani [a Kannada daily] days. Then, he started his own newspaper, Mungaru. He always stood for social justice, which is a rarity now. He wished that Dalits, Other Backwards Classes (OBC), the rural poor and other disempowered communities should take an active part in all public fields. He tried to ensure that his own chosen field of journalism was full of people from these backgrounds while he, himself, hailed from the Bunt community of the Dakshina Kannada district.

Raghurama Shetty is no longer with us. His Bunt community has forgotten about him. All the marginalised communities whose upliftment was closest to his heart also do not remember him anymore. This is painful to me, and I am here before you with that pain.

I inaugurated Mungaru. Reluctant as I was, Raghurama Shetty had virtually dragged me to the launch function, organised in Mangalore. It was September 9, 1984. [Renowned Kannada writer Poornachandra] Tejaswi presided over the function. I spoke just five or six sentences on the occasion. I remember those sentences even now, exactly as I spoke them, maybe because I have fallen in love with what I could speak there.

This is what I said:

In my part of the state, we think that people of Dakshina Kannada district are intelligent and educated. This the land of  Bhootaaradhane (spirit worship) and Yakshagana (a traditional folk dance in parts of coastal Karnataka). I am curious as to how the people here would see Raghurama Shetty’s Mungaru adventure. Perhaps they would wonder if Raghurama Shetty has brains. They would wonder how on earth this man can plunge into this battle with only a bunch of young lads. But remember one thing. This Raghurama Shetty is like the bhootas (spirits) that people worship here. Each of those young lads is like child-hero Abhimanyu.

This is it. This what I said there.

True, those young lads in the editorial team of Mungaru were like Abhimanyu. They were capable of breaking into the formidable Chakravyuha [a labyrinthine military formation]. But they fell victim to their own juvenile ideals and quit Mungaru after a few months.

Watching all these developments I had thought then: Well, these youngsters only knew how to break into Chakravyuha but did not know how to win the war. They could roar like a tiger but did not know the tactics of a clever cat.

I think those former young lads have also realised this now.

The youngsters who quit Mungaru amidst all this were also my favourite young friends. I was deeply pained. I was unable to fathom the depths of Raghurama Shetty’s sad state of mind. I do not wish to think about it even now. 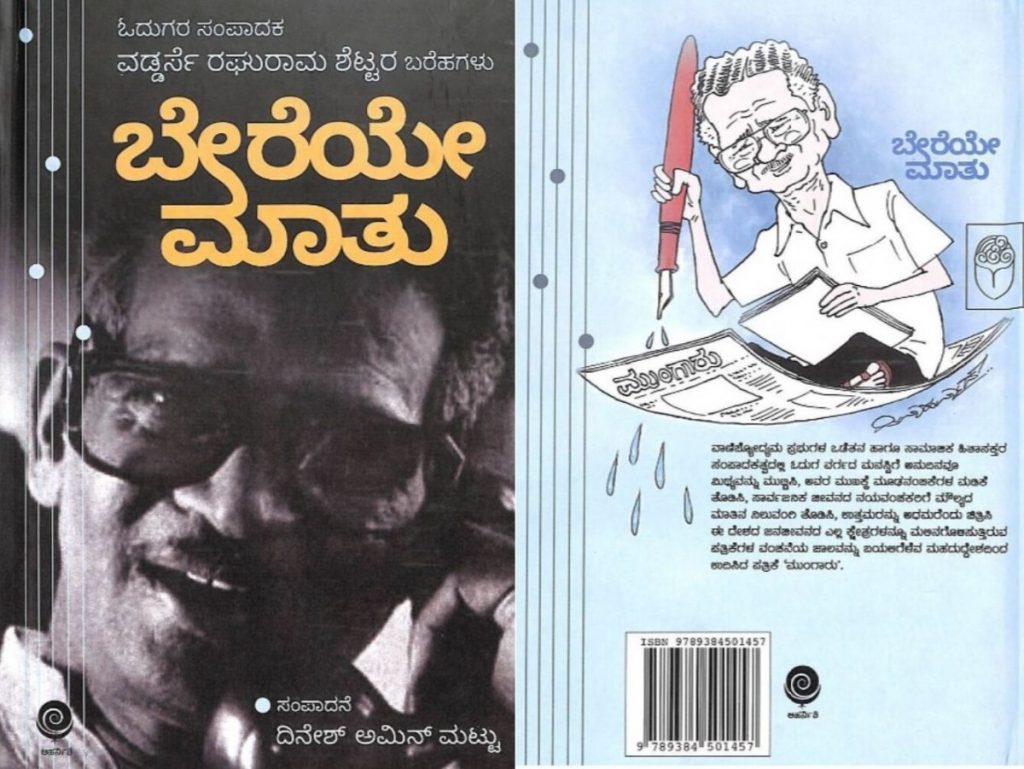 I would like to recall one incident. Mungaru faced a serious financial crisis soon after its launch. Raghurama Shetty was struggling hard to keep the publication afloat. This incident is narrated in the book being released today. Dinesh Amin Mattu, a former member of Shetty’s team of young lads, has narrated the incident in a section titled, Gurunamana:

‘As this cold war was on, one day Raghurama Shetty met S. Bangarappa (former Karnataka chief minister) in Bangalore, and sought his help to resolve the newsprint problem facing Mungaru. Bangarappa telephoned one of his industrialist friends who was in the excise business to send a load of newsprint to help Mungaru tide over the crisis. [The] very next day, Mungaru, on its front page, carried a cartoon which depicted Bangarappa in a very poor light – it depicted him in a saree, wearing bangles, waiting in front of Indira Gandhi’s house. The hint was that Bangarappa was trying hard to re-join the Congress after a stint in the opposition. Raghurama Shetty saw the hands of his colleagues in the publication of this cartoon at that critical juncture. He was extremely hurt. A director of Mungaru met Bangarappa that day with great trepidation. But Bangarappa took the cartoon in his stride and told the director that he knew Raghurama Shetty very well and that he need not worry about what had happened.’

I am confused even now. How do we describe Raghurama Shetty? As a hero? Or as a tragic hero? He had a big dream. He built a mansion to nurse that dream. Even when the mansion was crumbling, he clung to his dreams, eventually only to crumble with the mansion he built. When we see all this, he comes across as a tragic hero. But let us also remember that Raghurama Shetty, an adventurist, started Mungaru Publications, a public limited company, launched the Mungaru newspaper and made its readers shareholders of the company.

My sub-conscious mind may be seeing a hero in Raghurama Shetty because I am deeply saddened by the steep fall of the professional standards of the media today, especially the electronic media. Be that as it may; it is not all that important. But we need to ask one question:  Does the media report society’s problems or does the media create problems in society? What is really happening?

Also read: Karnataka Has a Long History of Attacks on the Freedom of Press

Take the example of the hijab controversy. Was there indeed a problem at the core of this controversy or did the media make it look like a problem which then led to this controversy? Can someone tell me? The media is out ruining its own respect, dignity, restraint, and scruples. This makes us remember Raghurama Shetty. His dream of a newspaper owned by none other than its readers should be a reality, at least now.

What is this ‘love jihad’? Everyone knows what love is all about. They say jihad is a war for religion. True love transcends religion. Love and war are poles apart. So, what is ‘kesari love’? Kesari stands for renunciation. How can love and renunciation go together? If the one who has given up everything in renunciation falls in love, what is the fate of the one who is loved?

This also has to do with the way men think. Men think that women are like dolls, with no mind of their own. As I thought about all of this, my mind became a furnace.

Before I end, let me share with you something that I find a marvel. All of us know that the Nagpur-based Rashtriya Swayamsevak Sangh (RSS) has been trying to propagate the ‘de-values’ of Golwalkar, who championed the cause of one particular group of the Chaturvarnya dharma (the religion centred around a four-fold segregation of society) and the inequality it engendered. [People inspired by Hindutva ideology] also champion the cause of Nathuram Godse, who is an icon of violence. 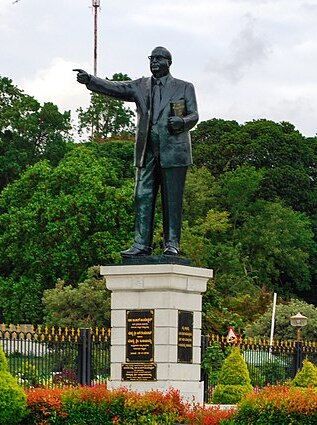 The parched land of India has been waiting for the droplets of tolerance, love, justice and equality. So, what are Gandhi and Ambedkar to India? Is Gandhi like a peepal tree which provides abundant oxygen, the life sustaining element, and Ambedkar like a banyan tree, the great shelter?

Translated from Kannada to English by A. Narayana, an associate professor at the Azim Premji University in Bangalore.

Devanoora Mahadeva is a Kannada writer who has been conferred with the Padma Shri as well as the Sahitya Akademi award, both of which he returned in protest against the growing intolerance in the country. A public intellectual and Dalit rights activist, he has been a guiding force to various social movements in Karnataka and the country.