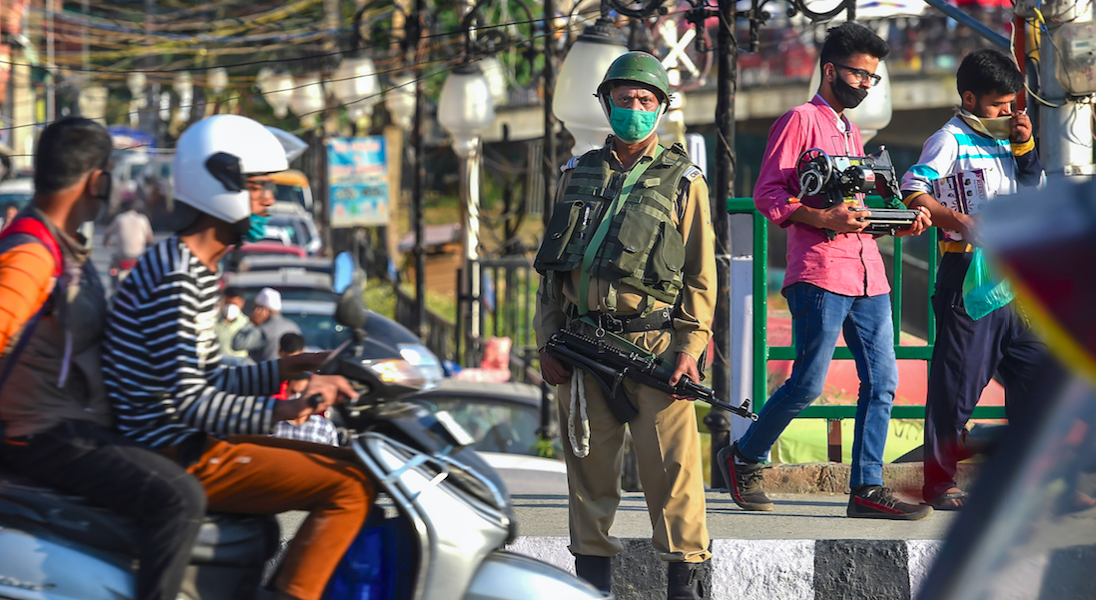 New Delhi: UN’s independent human rights experts has asked the Indian government to explain the legal basis for detention and charges against four Kashmiri journalists and closure of the allotment of office of Kashmir Times. It has also sought details on whether these actions complied with India’s obligations under international human rights law.

The letter was written by the UN Human Rights Council-appointed Special Rapporteur on the promotion and protection of the right to freedom of opinion and expression, Irene Khan and Vice-Chair of the Working Group on Arbitrary Detention, Elina Steinerte. While the message was dated June 3, it was made public earlier this month following the expiry of the deadline of 60 days.

In the letter, Special Rapporteur on the promotion and protection of the right to freedom of opinion and expression, Irene Khan and Vice-Chair of the Working Group on Arbitrary Detention Elina Steinerte, raised specific concerns about four journalists, Fahad Shah, Auqib Javeed, Sajar Gul and Qazi Shibli.

“While we do not wish to prejudge the accuracy of the information made available to us, we express serious concern at the reported acts of harassment and seemingly arbitrary detention and criminal proceedings and detentions levied or imposed against the aforementioned journalists, which is reportedly related to their journalistic activities on the situation in Jammu and Kashmir,” said the two UN human rights experts.

They were also “deeply concerned by the alleged closure of the Kashmir Times offices which also seems to be connected to its independent and reportedly outspoken reporting in the region”.

“We respectfully recall that journalism constitutes a necessary service for any society, as it provides individuals, and society as a whole, with the necessary information to allow them to develop their own thoughts and to freely draw their own conclusions and opinions (A/HRC/20/17 para 3). We note that the deprivation of liberty of any individual for exercising his/her right to freedom of expression would constitute an arbitrary deprivation of liberty, contrary to Article 9 of the Covenant,” it said.

So far, there has been no reply from the Indian government.

The letter documented allegations of six cases of intimidation of Fahad Shah, editor of weekly The Kashmirwalla, between June 2017 and January 2021.

Shah had been interrogated for four hours at Qazigund police station on October 3 last year after returning from a reporting trip to Punjab. The interrogating officer of the rank of deputy superintendent of police allegedly warned him to “show “self- restraint” and report “cautiously” about matters related to “national security”.

Before being released, he was made to sign a statement that his car, phones, and other belongings were returned without any tampering.

This year, a complaint was filed against the weekly after publishing a news article that authorities had forced a local school in the Shopian district to celebrate India’s Republic Day. “Shah and other members of the newspaper approached the district court in Shopian seeking anticipatory bail, however, it was denied by the court”.

In July 2018, Auqib Javeed was arrested and questioned for three days over an interview with a Kashmiri separatist leader for an English newspaper.

In September last year, there was an alleged escalation in the intimidatory tactics against Javeed after he published a story about police silencing several social media users by cautioning them against writing anti-government posts.

As detailed in the letter, Javeed was summoned by a state government official to the city of Shergandi. On entering the premises, his phones were intercepted. Then Javeed was taken away from his friends to another room by a police officer. “During the interrogation, Mr Javeed was slapped multiple times, while officers inquired about the article he had written and accused him of publishing a fabricated story”. The police officer told him that Kashmir was “burning” because “people like [him] were spreading fake narratives”.

Javeed has written for several publications, including The Wire.

His phone was handed back, but some conversations related to his professional work were allegedly deleted.

Sajar Gul, a freelance journalist based in North Kashmir, had received a threatening call from a local police officer after he wrote an article about demolition carried out by police without permission in February 2020. A day after the call, the same officer demolished Gul’s property and his maternal uncle’s fence.

In response, Shahgund villagers pelted stones and organised a protest. Police charged Gul for rioting, criminal trespassing and assaulting a public servant. “According to the defense, the journalist was in Srinagar at the moment of the alleged protests, about 40 kilometres away from the location it took allegedly took place”.

The UN experts also raised the case of Qazi Shibli, editor of The Kashmiriyat magazine, who was kept in detention and solitary confinement for nine months under the Public Safety Act. Two months after release, he was again detained for 18 days “for reporting on a fake encounter in Shopian Kashmir”.

In all the instances, none of the Kashmiri journalists had access to legal representation during interrogation.

The letter also referred to the closure of The Kashmir Times in October 2020 after the Jammu and Kashmir state department asked the staff to leave the premises. “According to the information we received, an eviction process establishes that a notice needs to be served to the occupant before the eviction takes place, stating valid grounds on which allotment is being cancelled with a time period of not less than seven days for the occupant to respond, according to the J&K Public Premises (Eviction) Act, Article 4. Up to this date, the offices of the Kashmir Times remain closed and no opportunity to appeal the decision has been granted”.

The UN experts also informed that the Working Group on Arbitrary Detention might also transmit these cases through the usual procedure “to render an opinion on whether the deprivation of liberty was arbitrary or not”.