Times of India Takes Down a Story the BJP Finds Embarrassing, Again

The TOI report was not only embarrassing for the Modi government at the Centre, but also for Rajasthan chief minister Vasundhara Raje. 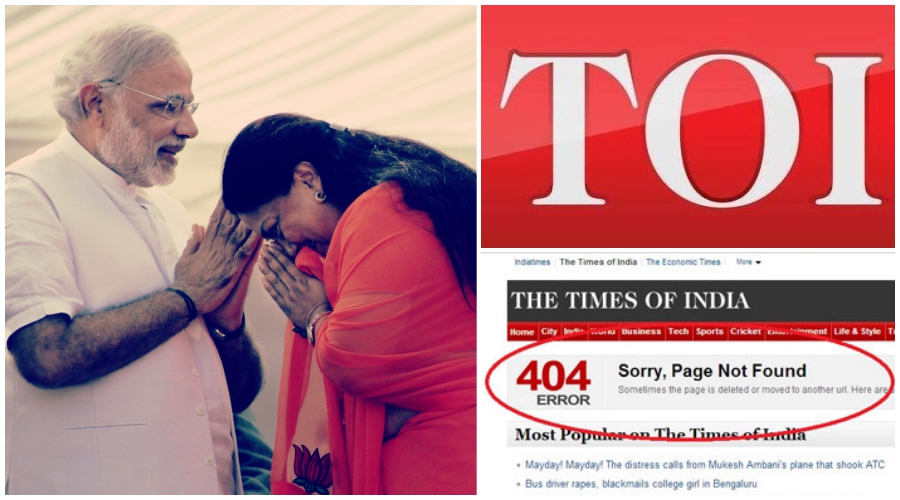 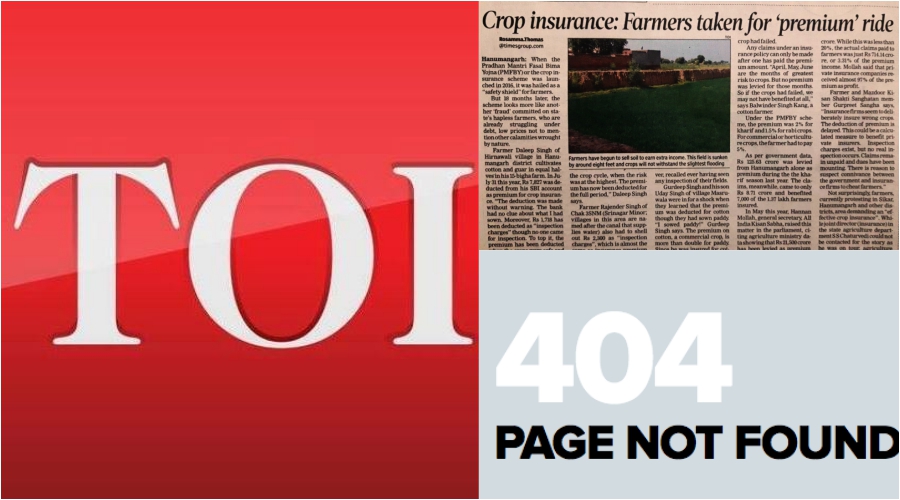 New Delhi: A story carried by the Times of India‘s Jaipur edition criticising the Narendra Modi government’s Pradhan Mantri Fasal Bima Yojana on September 14, 2017, was taken down from the newspaper’s website within hours of publishing.

The story by Rosamma Thomas reported how the scheme, which was hailed as a “safety shield” for farmers, has turned out to be just another way of the government taking Rajasthan’s hapless farmers for a ride.

Launched in 2016, Modi government’s scheme has so far largely benefitted the insurance companies, which, thanks to high premiums and unpaid claims, logged profits of nearly Rs 10,000 crore till April, according to the office of the Comptroller and Auditor general (CAG) and the non-government Centre for Science and Environment (CSE).

“The deduction was made without warning. The bank had no clue about what I had sown. Moreover, Rs 1,718 has been deducted as “inspection charges” though no one came for inspection. To top it [all], the premium has been deducted when the crops were safe and beyond the risk period. My crop was uninsured for 80% of the crop cycle, when the risk was at the highest. The premium has now been deducted for the full period,” a farmer who cultivates cotton and guar in equal halves in his 15-bigha farm told TOI. In July 31 this year, Rs 7,827 was deducted from his SBI account as premium for crop insurance. 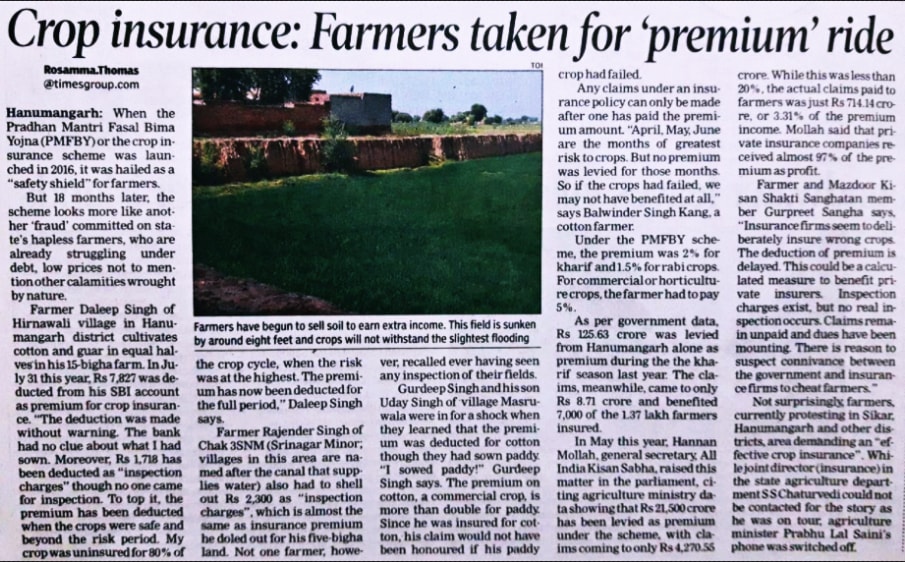 As it stands now, farmers have very little to gain from having their crop insured, while private insurance companies are raking in the profits, agriculture expert Devinder Sharma wrote in The Wire last month.

The TOI report was not only embarrassing for the Modi government at Centre, but also for Rajasthan chief minister Vasundhara Raje, who has faced a lot of flak in recent months from farmers in her state.

Thomas told The Wire that she was asked to remove the word ‘fraud’, which wasn’t originally part of the copy she filed and was added by the desk while editing the draft, and get a quote from the authorities. However, the story was spiked even after she complied with these requests.

“We were not happy with the introduction in the story,” claimed Kunal Majumder, TOI‘s resident editor for Jaipur, even though the story was published in his edition and would have been added to the Jaipur bureau’s list of stories that form part of the ‘Times News Network’ (TNN) with his approval. When asked if TOI will carry a clarification or a correction, Majumder said, “This isn’t a normal procedure. We have sent a revised copy to Delhi. Waiting for them to approve it.”

Asked to clarify what he meant by “sent revised copy to Delhi”, he said that they were waiting for Ranjan Roy, who heads TNN, to approve the new draft. 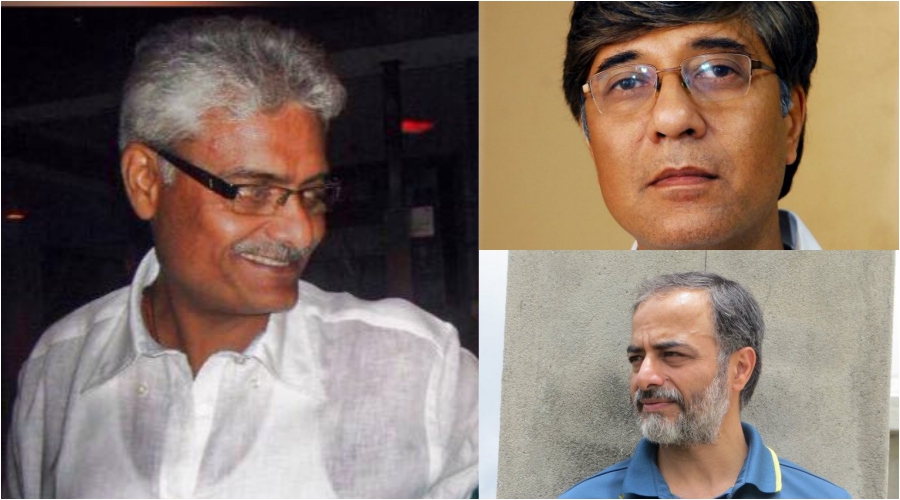 When contacted, Roy claimed that he was unaware of any such incident and that “the TOI website had a life of its own”, implying that the decision to take down the story was taken by the online editors.

TOI.in, whose editor Prasad Sanyal quit a few months ago, is currently headed by Times Internet Limited’s Rajesh Kalra. Under his direction, staffers say, the website – India’s largest news portal – has become especially accommodating towards advisories and releases from the Prime Minister’s Office and the government’s Press and Information Bureau.

Since Kalra took over TOI.in in 2014, the website’s editors have been unofficially asked to play up positive stories about the government. Former and current employees, who wished to remain anonymous, recalled multiple instances when they were asked to ‘drop stories critical of the government from the homepage, section landing pages and social media’. On some occasions requests were also made to the SEO team to ‘deindex’ stories so that they don’t show up in Google search.

“We were often provided data sourced from government to write positive stories, which were later promoted on the website,” said a former employee. Asked why the crop insurance story had been taken down, Kalra too declined to comment.

Ironically, the story was also uploaded under the ‘Good Governance’ section by TOI’s sister publication Navbharat Times as it still available on its website. 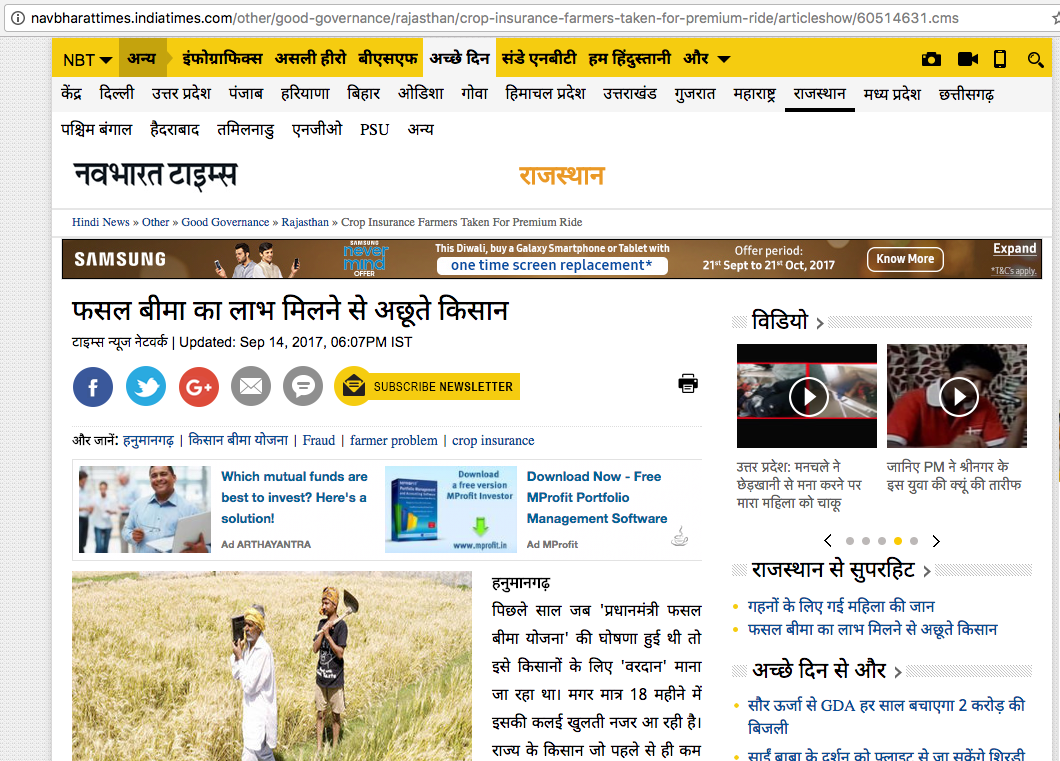 This section is used by the Times Group to highlight positive stories that fit Modi government’s ‘Acche Din’ narrative.

This isn’t the first time the TOI website has taken down a story carried by the print edition. In July, a story published by the TOI’s Ahmedabad edition about an apparent increase of “300%” in BJP president Amit Shah’s assets over the past five years was removed from the the newspaper’s website within hours of being published. While the BJP issued a statement about the asset increase after being slammed by the Opposition for getting the story removed, no explanation was ever given by the newspaper for pulling the plug on the news item from its website.

The Wire had also reported that TOI decided to delete its tweets and Facebook posts alerting readers to another story involving Smriti Irani: ‘PIL accuses Smriti Irani of fraud in MPLAD funds’. Irani is believed to have objected to the story, which appeared on July 27, 2017.

Meanwhile, sources at the TOI in Delhi said the decision to pull the Rajasthan crop insurance story was taken by executive editor Diwakar Asthana even though the revisions that he had himself suggested were incorporated. Despite multiple attempts by The Wire, Diwakar remained unreachable.

Asthana is no stranger to controversy. A leaked WhatsApp message in June revealed the extent of collusion between TOI editors and the Narendra Modi government. Sent mistakenly on an internal TOI journalist group by Asthana, the message detailed how he, along with former Economic Times and OPEN magazine editor P.R. Ramesh, lobbied on behalf of an unnamed income tax official with finance minister Arun Jaitley: 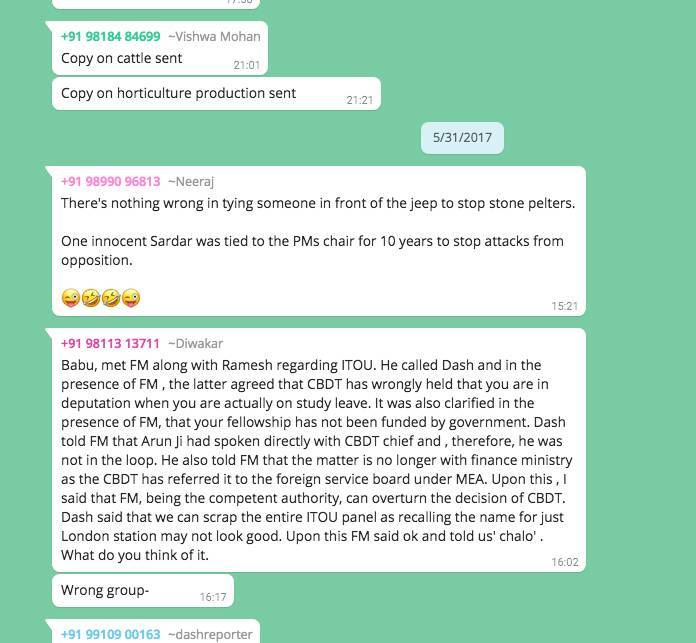 More specifically, the meeting between Asthana, Ramesh and Jaitley dealt with the manner in which the government decided postings for the “ITOU” panel. ITOU panel here likely referred to “income tax overseas units” – groups of income tax officers that are posted at Indian embassies abroad and serve as a liaison between Indian and foreign tax authorities.

During the meeting, the journalists asked Jaitley and his private secretary Simanchala Dash (whom the WhatsApp message referred to as “Dash”) that this unnamed income tax official be assigned the ITOU posting in London.

The above mentioned instances of TOI censoring anti-government stories answer an important question raised by The Wire in June: If editors from the Times of India and other newspapers have the ability to push for personnel changes with government ministers, do these ministers, in turn, have the ability to influence the editorial line in these newspapers – including what gets printed and what get’s taken down?

Newslaundry, which first reported the taking down of Rosamma Thomas’s story, also said that she had received a WhatsApp message on September 17 from an unknown person stating that referred to Gauri Lankesh’s recent assassination and said people who dare to write against Prime Minister Narendra Modi or the RSS would not be spared.

Similar messages have been sent anonymously to journalists around the country but are not believed to be linked to specific stories.