Times Now has accused The Wire of running a "factually inaccurate" story about the showing of a doctored video on the channel. The charge is laughable. 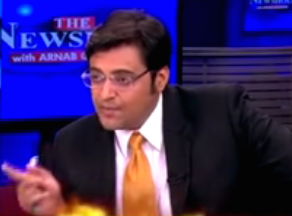 Times Now has accused The Wire of running a “factually inaccurate” story about the showing of a doctored video on the channel. The charge is laughable. The story in question is an article by me, published on February 19, 2016 titled On Kanhaiya: It is Time to Stand Up and Be Counted. A screengrab of the note published by Times Now on February 19, 2016, accusing The Wire of inaccurately reporting that the TV channel had aired a doctored video of Kanhaiya Kumar’s speech.

The doctored video, created by persons unknown, was intended to portray JNU Students Union (JNUSU) president Kanhaiya Kumar, now in jail facing charges of sedition, as someone who shouted slogans in favour of Kashmir’s azadi (Hindi for independence). The video was aired on several TV channels, including Times Now, and the article in question noted this fact.

On the afternoon of February 19, Arnab Goswami called me and insisted that Times Now had not shown the video at all and that when BJP spokesman Sambit Patra attempted to show it on air, he had stopped Patra from doing so. Taking Goswami, someone whom I have known for years, at his word, I edited the article to remove the reference to Times Now and added a note at the end stating:

In an earlier version of this article, Times Now was listed as one of the channels that broadcast the doctored tape of Kanhaiya Kumar. The channel’s head, Arnab Goswami has clarified that a BJP spokesman, Sambit Patra, sought to play the clip on his iPad during a debate but was not allowed to as the clip was not verified, and the clip was never played on the channel.

Soon thereafter, Times Now put up a notice on its channel (pictured above) in which it said the charge of having aired doctored footage was “factually incorrect”. When a reader of The Wire sent me the YouTube link which showed the doctored footage being aired on the channel, it became clear that Arnab Goswami had misled me.

After The Wire called Goswami out for having aired the doctored video,  his argument changed from ‘We never aired it’ to ‘We said the footage was unverified’. He then put out a 46-second, selectively edited version of his show with this misleading description:

Watch: The Newshour clip where BJP Spokesperson is told video put on Hindi channel had to be examined and could not be taken at face value.

The aim was to absolve himself of any legal or moral responsibility for having aired the forged clip, and treating it as fact in the questions he asked his studio guests. Forty-six seconds is all it takes to confirm that Times Now‘s claim – that Gowami told the BJP spokesman that the video “could not be taken at face value” – is itself a blatant lie.

How the doctored video was used

In this official recording of The Newshour programme, Goswami can clearly be heard repeatedly asking Patra (from 22:50 onward) to “show the video, show the video”. When Patra shows it, Goswami orders the Times Now camera to zoom in on it. “Show the video close by,” he says. After the forgery is aired, Goswami declares triumphantly, “I could clearly hear him [Kanhaiya] say, if that is indeed him in the video, I can clearly hear him say ‘leke rahenge azadi’.” He then turns to a guest, Anand Kumar from JNU, and says, “You are the one who is defending him. If this video is correct, then what are you going to say now?”

Neither during the airing of the clip by Patra nor immediately after does Goswami warn viewers that the contents of the video are completely unverified. It was left to another guest on the show, Swara Bhaskar, to object to the fact that the channel was airing an unverified clip. A few minutes later, while questioning Anand Kumar, Goswami says to him, “This is a video that is being shown by some Hindi channel. The point is that we will have to verify the video.” But then he immediately proceeds to question Kumar treating the video as completely authentic:

“The question to you Anand Kumar is this. There is Umar Khalid of the DSU, who is a member of a banned front organisation of the Maoists [sic], that has been established. … next to him is Kanhaiya in the video and what he’s saying is hum lekenge rahenge azadi. You know that Umar’s references to azadi were in the context of Kashmir. You can’t really turn it around to say, no, no, he is talking about azadi from BJP or sangh parivar. It cant be twisted to that point.

“If he did say these words, hum lekenge rahenge azadi, are you now going to say we must establish whether it was in the context of Kashmir or whether it was in a broad context, when you know he is standing next to Umar Khalid, and if you make that argument will someone accuse you of being blind to that facts that are coming there in your face.” [Emphasis added.]

After Anand Kumar comprehensively refutes these claims, Goswami agrees to give him the “benefit of the doubt since this video has to be examined” and concedes that “he could have been talking about azadi in another case”. But the recording of the hour-long show makes it clear that during his questioning of Kumar, Arnab had treated the contents of the fabricated video (that he had himself ordered Sambit Patra to play on air) as authentic.

I leave it to the readers of The Wire and the viewers of Times Now to watch the hour long clip and decide for themselves.