From telling people when ration delivery vans are coming to providing counselling on anxiety and job losses, 'Gurgaon ki Awaz' has become an important community voice. 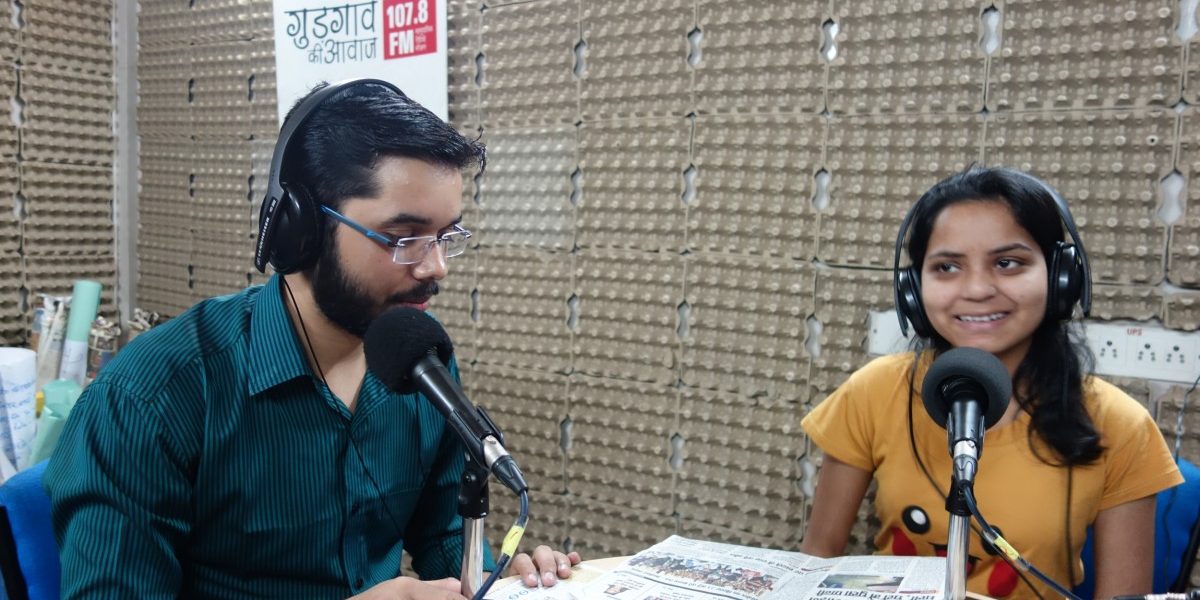 New Delhi: For nearly a month now, a government vehicle has been ferrying a young reporter from a community radio station to and fro her recording studio in Sector 31, Gurugram. Preeti Jhakra has been playing the all-important role of linking a large number of people, especially migrant labourers working in a 10-km radius around the studio, to schemes and plans of the city administration designed to combat COVID-19 spread.

Food to medicines to counselling, station is addressing it all

From telling the masses about the timing of food delivery vans, their schedule and location, to guiding them about restrictions placed on movement and quarantine status in various parts of the district, and even counselling them on how to tackle food and money shortages, where to get aid from and how to overcome anxiety, the anchor of `Gurgaon ki Awaaz’ is ensuring that the station succeeds as a hyperlocal communication system in this time of crisis.

“People have been calling up to ask from where they could get the rations, for how long do they need to stock up. During the lockdown some even called to say that they were even scared to go up to the gate of their colony or society for the fear of being beaten up by the police. We have been clearing such doubts and providing relevant information,” said Jhakra, who has been working with the station for nearly three years now.

During the time when migrant workers from Gurugram had started walking to their native places last month, the radio station did a yeoman’s service in providing people in the area information on how this was not a good idea. The message went out to a large population of such workers that resides in Kapashera, Dundahera and Mullahera villages. “I would always request them to stay where they are. We also guided people by telling them about the shops in their vicinity that would remain open and provide essentials,” said Jhakra.

Of late, she said, the nature of queries have somewhat changed. “Now people ask about stress and anxiety they are facing due to the long stay at home or due to the fear of losing their jobs. So we have also been getting counsellors on our show to guide them.”

`Hyperlocal media was found most suited to address local concerns’

Founder of ‘Gurgaon ki Awaaz’ Arti Jaiman said while the community radio station has been around for the last 10 years, and it has worked on various issues pertaining to the community, during the past month it has worked in close coordination with the district administration like never before.

“We never worked this closely before. The administration realised that we were the best hyperlocal media around to address the local concerns. We get officials from Civil Defence on the programmes to answer the queries of the citizens. They also provide transport to Preeti, who has been running the programmes from the studio, while a team of five others, including two other reporters, two volunteers and me provide the back-up for the programming.”

Also read: How Gurugram Fights the Coronavirus, and Hunger

Jaiman said the station has been providing every single update coming out of the administration. “People take it seriously because this is genuine verified information coming from the government. So we have provided information pertaining to the schedule and stoppages of Guru Gaman low bus service through which essential food items were being sold; names and addresses of chemists who possessed masks or sanitisers; and even hospitals which provided testing facility or which were designated for COVID-19 treatment.”

Stating that `Gurgaon ki Awaaz’ gets about 20,000 unique callers in a year and so is estimated to have around five lakh listeners, Jaiman said it has emerged as an important tool for disseminating local information.

In the studio, she said one live programme was recorded almost every day. “It would range from 40 minutes to an hour. Then through the day we also provide live updates. To announce the programmes, the channel amplified them through its facebook page or through the civil society groups.”

After the spread of novel coronavirus, Jaiman said two of its reporters left for their homes and so did the two volunteers. But they continued to help with the programming from their places. “Preeti is the only person who decided to continue to operate from the studio. She not only anchors the programmes, but also handles the mike, broadcast system and audio levels all at once.”

On the importance of this programming, chief warden on Civil Defence, Gurugram, Mohit Sharma, who has done several live programmes through the radio station, said: “The channel appeals to people because it also conveys the local culture, which is not possible through the bigger FM channels. Also, it has been around for many years and has built trust with the masses by raising their issues.”

During the lockdown, Sharma said the administration used the channel to tell people about what all would be covered and which services would remain open. “Also, we told people that if they develop symptoms of COVID-19, then they should not go to the local doctors but to the designated hospitals. Also, there is a large working population in the area this channel covers and we urged it to not leave the city, assuring that food would be supplied to every person. We also got `pradhans’ or village headmen to appeal to landlords to waive the rent for a few months so that migrant labourers did not flee in panic.”

Also read: Backstory: Media Please Note, COVID-19 Has Brought out the Best and Worst in Us

Such appeals clearly had an impact on a large population. A regular listener of the radio station, Taj Mohammad, who works in Sector 37 and hails from Jalaun near Kanpur in Uttar Pradesh, said he deferred his plans to leave for his village soon after the lockdown was announced. “I have two small daughters aged two and three-and-a-half. I was also concerned as to how I would make ends meet if the units would close down and money and food would become an issue. But I am an aware citizen and I know where to get aid from in such times of crisis.”

Mohammad, however, charged that the administration should have made immediate plans to curb increase in prices of essentials like pulses and wheat flour soon after the lockdown was announced. “That also led to panic and it could have been avoided,” he said.