“As we operate in a world where press freedom is nosediving, and the need for robust, reliable journalism grows, the future for journalism is dependent on groups like The Wire” the IPI and IMS said while handing over the award. 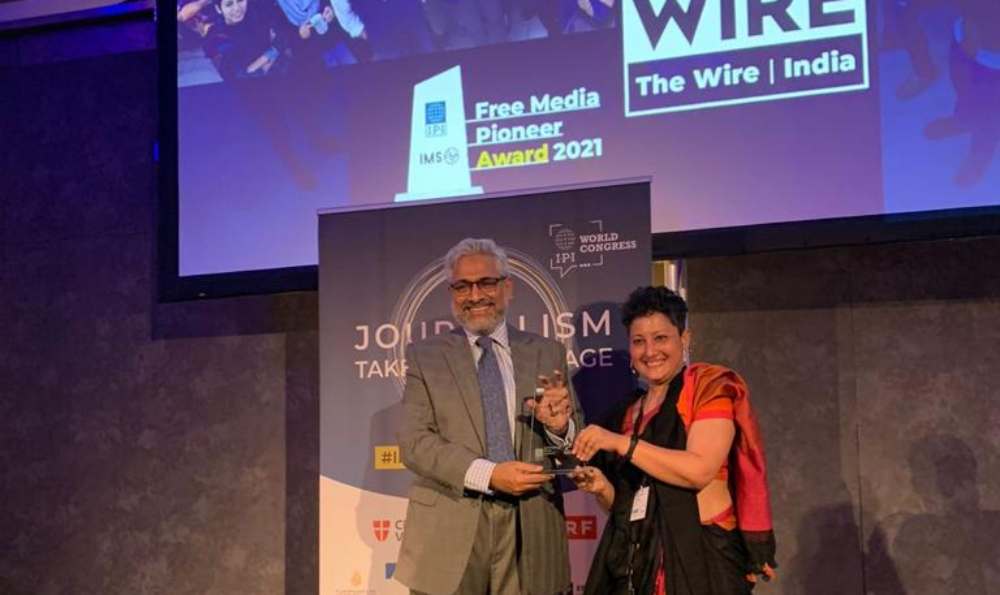 Vienna: Acclaimed as “a leader in India’s digital news revolution and a tireless defender of independent, high-quality journalism”, The Wire on Thursday received the 2021 Free Media Pioneer Award at a ceremony in the Austrian capital on Thursday as part of the ongoing World Congress of the International Press Institute.

“The annual Free Media Pioneer Award was established by the International Press Institute (IPI) in 1996 to recognise media organisations that are innovating for better journalism and news access, or fighting for a better press freedom environment in their country or region. My organisation, International Media Support (IMS) is proud to jointly present the award since 2015,” Gulnara Akhundova of the IMS said in her introductory remarks during the awards ceremony,.

“These Pioneers are not just making a difference at one stage of history; they are not just fighting – and winning –  one battle. They are part of the solutions for future journalism; they are inspiring others to follow their example.”

Akhundova said she was “extremely grateful and proud to be here to announce that non-profit news site The Wire, a leader in India’s digital news revolution and a tireless defender of independent, high-quality journalism, is the recipient of the 2021 Free Media Pioneer Award.”

“The work of the great Wire Team embodies the values of justice and integrity – the values of good journalism – journalism delivered at a high price. Journalism that thrived despite defamation and criminal suits, surveillance and other forms of harassment. From The Wire’s emergence in challenging circumstances amid the information noise in 2015 to becoming a leading independent watchdog, fighting for the digital rights and producing hard-hitting journalism that the audience trusts and supports, The Wire’s experience and dedication inspire many of us around the world.

“As we operate in a world where press freedom is nosediving, and the need for robust, reliable journalism grows, the future for journalism is dependent on groups like The Wire who work tenaciously and against all odds to ensure that citizens have chance to shape their future.”

The event organisers then played a short video in which The Wire spoke about its journey.

Following the video, Akhundova invited The Wire’s founding editor Siddharth Varadarajan and national affairs editor Sangeeta Barooah Pisharoty on stage to receive the award on behalf of The Wire.

“Congratulations on winning the 2021 Free Media Pioneer Award,” she said while handing over the commemorative plaque, adding: “Your dedication to the public interest and championing press freedom is admirable and immensely needed. Thank you for your commitment and contributions to make the world a better place.”

In brief remarks after receiving the award, Varadarajan thanked the organisers for honouring The Wire, his colleagues at the website, its readers, viewers and contributors for placing their trust and support in The Wire, and for the vibrant independent media ecosystem in India of which he said The Wire was a part. The award was special, he said, because it came from one’s peers. And it came at a time when independent media in India – and the democratic rights of the people – were under pressure. Such demonstrations of solidarity, he said, were of enormous help to journalists.

Read the full text of Varadarajan’s remarks below:

“It may seem odd to many that a Free Media Pioneer Award should go to a media organisation in a country that is seen around the world as the world’s largest democracy. But that too is a comment on the times we are going through. In India, as in many other countries, democracy is facing all kinds of new challenges and strains and pressures. And the media is one of those sectors that is bearing that brunt. It is important that we resist that pressure, because the defence of media freedom is also, at the end of the day, the defence of democracy.

“Colleagues, this award that you have granted to The Wire today is a shot in the arm for not just ourselves but for independent media in India. Because if there is one thing that counts more than anything else in these troubled times, it is the respect and support of one’s peers and the solidarity that they show at moments of crisis.

“It is this solidarity that gives us the courage and the resolve to do the work we do, it is this solidarity that makes the work a little bit less lonely and little bit less difficult. And to my mind, that is what you have done today in honouring The Wire – a young media organisation, we started in 2015, when my colleagues M.K. Venu and Sidharth Bhatia got together. We had imagined it would be a slow, difficult, long and arduous road. But we have made an impact, we have made our presence felt in the Indian media and in the national landscape. And today, at a time when we are under pressure and other journalists and other independent media are under pressure, this act of solidarity by the IPI and IMS is worth everything in the world. Thank you very much for giving this honour to The Wire and I am very, very grateful on behalf of all my colleagues.”