The Humpty Dumpty Censorship of Television in India

The Modi government's attack on Sathiyam TV is another manifestation of the Indian state’s paranoia of the medium of film and television, and consequently, the irrational controlling impulse of the law 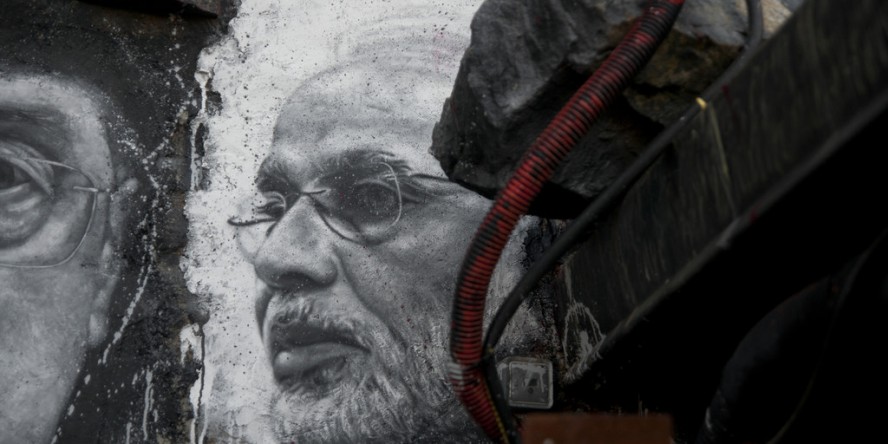 It is tempting to think of the Ministry of Information and Broadcasting’s (MIB) attack on Sathiyam TV solely as another authoritarian exhibition of Prime Minister Narendra Modi’s government’s intolerance of criticism and dissent. It certainly is. But it is also another manifestation of the Indian state’s paranoia of the medium of film and television, and consequently, the irrational controlling impulse of the law.

Sathiyam’s transgressions began more than a year ago, on May 9, 2014, when it broadcast a preacher saying of an unnamed person: “Oh Lord! Remove this satanic person from the world!” The preacher also allegedly claimed this “dreadful person” was threatening Christianity. This, the MIB reticently claims, “appeared to be targeting a political leader”, referring presumably to Prime Minister Modi, to “potentially give rise to a communally sensitive situation and incite the public to violent tendencies.”

The MIB was also offended by a “senior journalist” who, on the same day, participated in a non-religious news discussion to allegedly claim Modi “engineered crowds at his rallies” and used “his oratorical skills to make people believe his false statements”. According to the MIB, this was defamatory and “appeared to malign and slander the Prime Minister which was repugnant to (his) esteemed office”.

For these two incidents, Sathiyam was served a show-cause notice on 16 December 2014 which it responded to the next day, denying the MIB’s claims. Sathiyam was heard in-person by a committee of bureaucrats on 6 February 2015. On 12 May 2015, the MIB handed Sathiyam an official an official “Warning” which appears to be unsupported by law. Sathiyam moved the Delhi High Court to challenge this.

As Sathiyam sought judicial protection, the MIB issued the channel a second warning August 26, 2016 citing three more objectionable news broadcasts of: a child being subjected to cruelty by a traditional healer in Assam; a gun murder inside a government hospital in Madhya Pradesh; and, a self-immolating man rushing the dais at a BJP rally in Telangana. All three news items were carried by other news channels and websites.

Most news providers use multiple media to transmit their content and suffer from complex and confusing regulation. Cable television is one such medium, so is the Internet; both media swiftly evolve to follow technological change. As the law struggles to keep up, governmental anxiety at the inability to perfectly control this vast field of speech and expression frequently expresses itself through acts of overreach and censorship.

In the newly-liberalised media landscape of the early 1990s, cable television sprang up in a legal vacuum. Doordarshan, the sole broadcaster, flourished in the Centre’s constitutionally-sanctioned monopoly of broadcasting which was only broken by the Supreme Court in 1995. The same year, Parliament enacted the Cable Television Networks (Regulation) Act, 1995 (“Cable TV Act”) to create a licence regime to control cable television channels. The Cable TV Act is supplemented by the Cable Television Network Rules, 1994 (“Cable Rules”).

The state’s disquiet with communications technology is a recurring motif in modern Indian history. When the first telegraph line was laid in India, the colonial state was quick to recognize its potential for transmitting subversive speech and responded with strict controls. The fourth iteration of the telegraph law represents the colonial government’s perfection of the architecture of control. This law is the Indian Telegraph Act, 1885, which continues to dominate communications governance in India today including, following a directive in 2004, broadcasting.

The Cable TV Act requires cable news channels such as Sathiyam to obey a list of restrictions on content that is contained in the Cable Rules (“Programme Code“). Failure to conform to the Programme Code can result in seizure of equipment and imprisonment; but, more importantly, creates the momentum necessary to invoke the broad powers of censorship to ban a programme, channel, or even the cable operator. But the Programme Code is littered with vague phrases and undefined terms that can mean anything the government wants them to mean.

The rest of the Programme Code is no less imprecise. It proscribes content that “offends against good taste” and “reflects a slandering, ironical and snobbish attitude” against communities. On the face of it, several provisions of the Programme Code travel beyond the permissible restrictions on free speech listed in Article 19(2) of the Constitution to question their validity. The fiasco of implementing the vague provisions of the erstwhile section 66A of the Information Technology Act, 2000 is a recent reminder of the dangers presented by poorly-drafted censorship law – which is why it was struck down by the Supreme Court for infringing the right to free speech. The Programme Code is an older creation, it has simply evaded scrutiny for two decades.

The arbitrariness of the Programme Code is amplified manifold by the authorities responsible for interpreting and implementing it. An Inter-Ministerial Committee (IMC) of bureaucrats, supposedly a recommendatory body, interprets the Programme Code before the MIB takes action against channels. This is an executive power of censorship that must survive legal and constitutional scrutiny, but has never been subjected to it. Curiously, the courts have shied away from a proper analysis of the Programme Code and the IMC.

In 2011, a single judge of the Delhi High Court in the Star India case (2011) was asked to examine the legitimacy of the IMC as well as four separate clauses of the Programme Code including rule 6(1)(i), which has been invoked against Sathiyam. But the judge neatly sidestepped the issues. This feat of judicial adroitness was made possible by the crass indecency of the content in question, which could be reasonably restricted. Since the show clearly attracted at least one ground of legitimate censorship, the judge saw no cause to examine the other provisions of the Programme Code or even the composition of the IMC.

This judicial restraint has proved detrimental. In May 2013, another single judge of the Delhi High Court, who was asked by Comedy Central to adjudge the validity of the IMC’s decision-making process, relied on Star India (2011) to uphold the MIB’s action against the channel. The channel’s appeal to the Supreme Court is currently pending. If the Supreme Court decides to examine the validity of the IMC, the Delhi High Court may put aside Sathiyam’s petition to wait for legal clarity.

As it happens, in the Shreya Singhal case (2015) that struck down section 66A of the IT Act, the Supreme Court has an excellent precedent to follow to demand clarity and precision from the Programme Code, perhaps even strike it down, as well as due process from the MIB. On the accusation of defaming the Prime Minister, probably the only clearly stated objection by the MIB, the Supreme Court’s past law is clear: public servants cannot, for non-personal acts, claim defamation.

Beyond the IMC’s advisories and warnings, the Cable TV Act contains two broad powers of censorship. The first empowerment in section 19 enables a government official to ban any programme or channel if it fails to comply with the Programme Code or, “if it is likely to promote, on grounds of religion, race, language, caste or community or any other ground whatsoever, disharmony or feelings of enmity, hatred or ill-will between different religious, racial, linguistic or regional groups or castes or communities or which is likely to disturb the public tranquility.”

The second empowerment is much wider. Section 20 of the Cable TV Act permits the Central Government to ban an entire cable television operator, as opposed to a single channel or programmes within channels, if it “thinks it necessary or expedient so to do in public interest”. No reasons need be given and no grounds need be considered. Such a blunt use of force creates an overwhelming power of censorship. It is not a coincidence that section 20 resembles some provisions of nineteenth-century telegraph laws, which were designed to enable the colonial state to control the flow of information to its native subjects.

A manual for television bans

Film and television have always attracted political attention and state censorship. In 1970, Justice Hidayatullah of the Supreme Court explained why: “It has been almost universally recognised that the treatment of motion pictures must be different from that of other forms of art and expression. This arises from the instant appeal of the motion picture… The motion picture is able to stir up emotions more deeply than any other product of art.”

Within this historical narrative of censorship, television regulation is relatively new. Past governments have also been quick to threaten censorship for attacking an incumbent Prime Minister. There seems to be a pan-governmental consensus that senior political leaders ought to be beyond reproach, irrespective of their words and deeds.

But on what grounds could the state justify these bans? Lord Atkins’ celebrated war-time dissent in Liversidge (1941) offers an unlikely answer:

“When I use a word,’ Humpty Dumpty said in rather a scornful tone, ‘it means just what I choose it to mean – neither more nor less.’”

Bhairav Acharya is a lawyer who is interested in free speech, privacy, and technology. He is presently at Berkeley.