Cautioned Optimism to Outright Alarm: How 'The Economist' Covered Modi Through the Years

'Over the past five years Mr Modi has lived up neither to the hype nor to the dire warnings.'

New Delhi: Billionaire investor and philanthropist George Soros has singled out India as the country where the ‘most frightening’ setback has occurred in the global tide of authoritarian nationalism.

Speaking at the World Economic Forum (WEF) in Davos, Soros said, “The biggest and most frightening setback occurred in India where a democratically elected Narendra Modi is creating a Hindu nationalist state, imposing punitive measures on Kashmir, a semi-autonomous Muslim region, and threatening to deprive millions of Muslims of their citizenship.”

He is not alone. Worldwide, criticism has come thick and fast of the tendency of the Narendra Modi-led BJP government to fashion India into a Hindu nation. A picture of the change in perception is visible through the covers of the UK-based weekly The Economist through Modi’s political career.

Soros’s remarks were hot in the heels of the latest Economist cover. 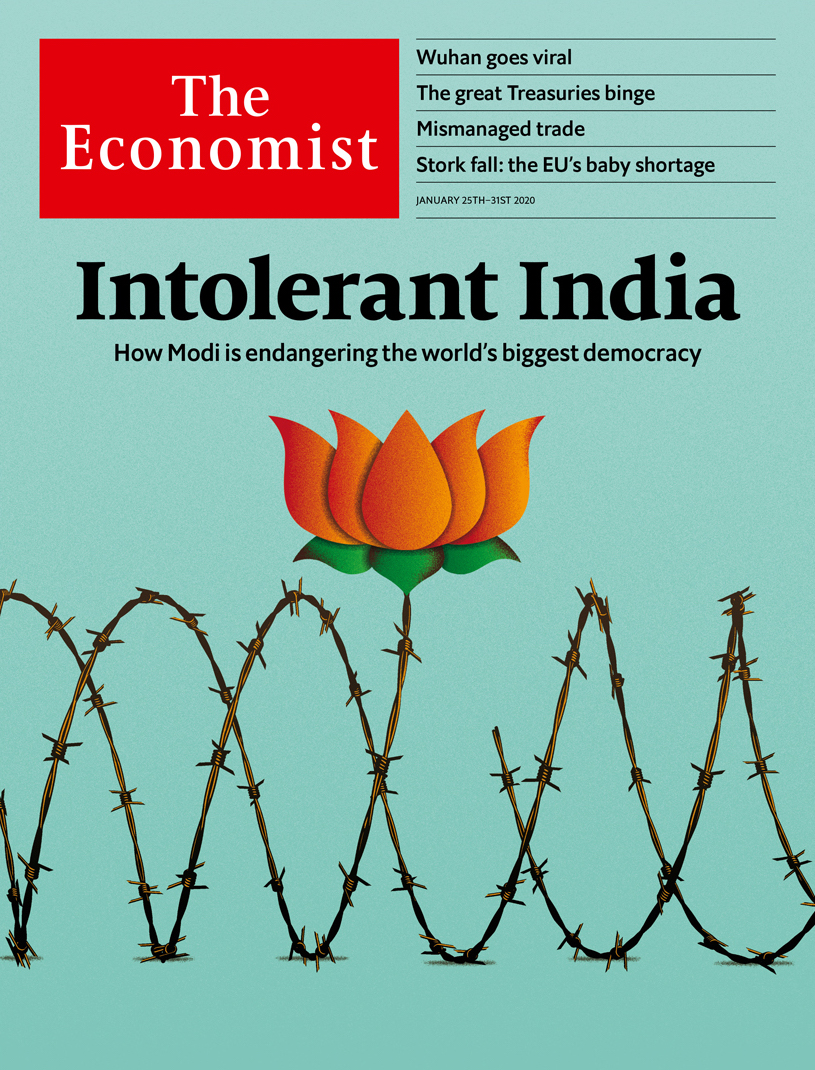 The January 23, 2020 edition titled ‘Intolerant India‘ rebuked Narendra Modi for stoking “divisions in the world’s biggest democracy”. The story traced the BJP’s rise to electoral prominence following the demolition of the Babri Masjid and the subsequent increase in its vote bank after riots in Gujarat in 2002. Noting that a thumping electoral victory in 2019 had further emboldened the BJP, the editorial asserted that “what has been electoral nectar for the BJP is political poison for India”.

Highlighting the blatantly discriminatory policies of the Modi government, the editorial further lambasted the BJP for glorifying cow vigilantes, pushing for a “flagrantly biased approach to citizenship” and meting out a form of “collective punishment” for the people of the Kashmir Valley.

The edition signalled a marked shift from the more or less favourable commentary that Narendra Modi, as Gujarat chief minister and then the prime minister, had been on the receiving end of.

An article in a July 2011 edition of The Economist had referred to Gujarat as ‘India’s Guangdong‘ which served as a glimmer of economic growth despite its “black spot”. The state, the piece noted, could be a potential “springboard” for Modi’s national ambitions. Modi then had yet to shed his polarising image, but had “at least built up an enviable record on the economy”.

As Modi was poised to be the frontrunner ahead of the 2014 general elections, the December 14, 2013 edition of the weekly, presciently titled ‘Would Modi save India or wreck it?‘, questioned whether his qualities outweighed the “huge stain” of the Gujarat pogroms. 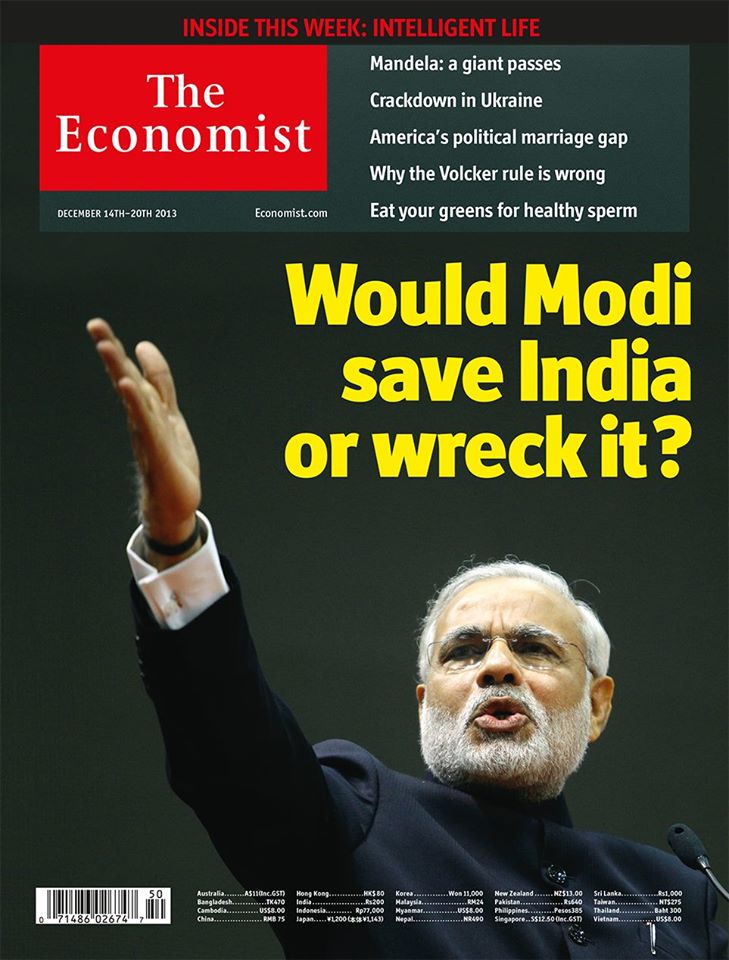 The editorial applauded Modi’s record as chief minister of Gujarat and his efforts to cut red-tapism, encourage investment and exports and improve social indicators. Describing Modi’s promises to replicate Gujarat’s growth model and industrial development across India as “refreshing”, The Economist noted:

“Much about Mr Modi appeals to this newspaper too. He is a man of action and an outspoken outsider in a political system stuffed with cronies.”

However, the editorial expressed concerns over his autocratic leadership qualities and the apparent threat to India’s “inclusiveness” and said:

“In the next five months Mr Modi needs to show that his idea of a pure India is no longer a wholly Hindu one. How he does that is his own affair, but an unambiguous public demonstration that he abhors violence and discrimination against Muslims is a bare minimum. Otherwise, this newspaper will not back him.”

A month before election results in 2014, when Modi’s election was practically a foregone conclusion, the April 5 edition of The Economist titled ‘Can anyone stop Narendra Modi?‘ held that while, in comparison to the corruption-tainted Congress coalition, Modi was “clean”, there were still unaddressed concerns:

“So there is much to admire. Despite that, this newspaper cannot bring itself to back Mr Modi for India’s highest office.” 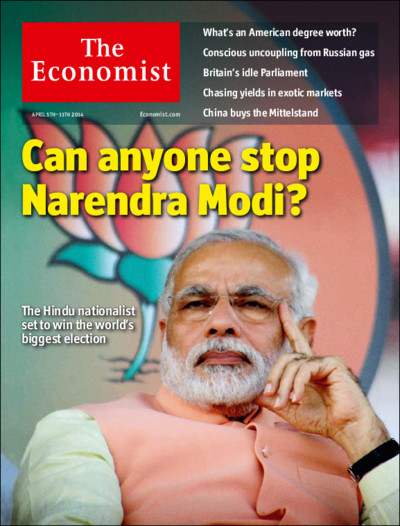 Referring to Modi’s persistent refusal to answer questions surrounding the anti-Muslim riots in 2002, the magazine advised that in the event of a likely BJP victory, “its coalition partners should hold out for a prime minister other than Mr Modi” and added:

“And if they still choose Mr Modi? We would wish him well, and we would be delighted for him to prove us wrong by governing India in a modern, honest and fair way. But for now he should be judged on his record—which is that of a man who is still associated with sectarian hatred. There is nothing modern, honest or fair about that. India deserves better.”

A week after the 2014 election results, Modi was gracing the cover of The Economist yet again in an editorial titled ‘India’s strongman: How Modi can unleash India‘.

The editorial felt that “for the first time ever, India has a strong government whose priority is growth” and that Modi’s victory had given India “its best chance ever of prosperity”. 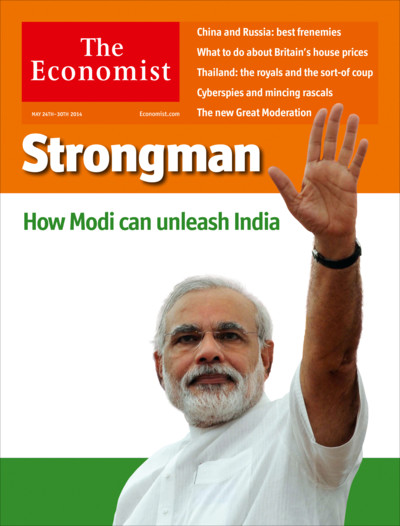 Delineating all the economic hurdles Modi had promised to overcome, the editorial foresaw some possible dangers.

“One is that Mr Modi turns out to be more of a Hindu nationalist than an economic reformer,” the magazine said. Another was the fear that Modi would, like Indira Gandhi, “rule as an autocrat, not a democrat”. Underscoring years of institutional rot in the country under the Congress, The Economist cautioned:

“The main police investigator is politically directed, the media can be bought, the central bank, which does not have statutory independence, has been bullied before, and Mr Modi has authoritarian tendencies.”

Months before the Modi-led NDA was scheduled to present its first full budget, The Economist, in February 2015, wrote that it was finally ‘India’s chance to fly‘. Given that several economies were mired in stagflation, the editorial argued that India needed “bold reforms and political courage” and that the country’s leadership should not defer the tough reforms needed for lasting success. 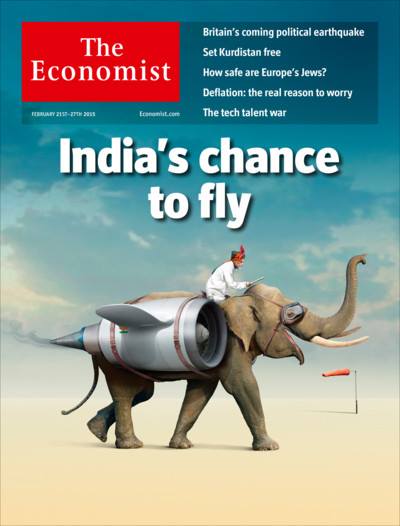 The Economist magazine cover for February 19, 2015.

“Mr Modi and Mr Jaitley have a rare chance to turbocharge an Indian take-off.,” the article said.

In a special report in The Economist in May 2015 called ‘India’s one-man band‘, correspondent Adam Roberts said that Modi had grand ambitions for the country and a self-confidence to match. “But he has yet to show how he will deliver,” said Roberts.

The report noted that while Modi’s decision to cut back on bureaucracy may have been necessary, his style had “spread dismay”.

“He dominates his government but has struggled to silence members of the RSS as well as Hindu-nationalist-inclined members of his own administration who try to spread religious discord,” the report said.

Even as the news cycle in 2016 was largely dominated by Donald Trump and Brexit, The Economist cover on March 5 titled ‘India online‘ was optimistic about “the world’s fastest-growing large economy, and the planet’s biggest population of millennials” and the potential of Indian e-commerce. 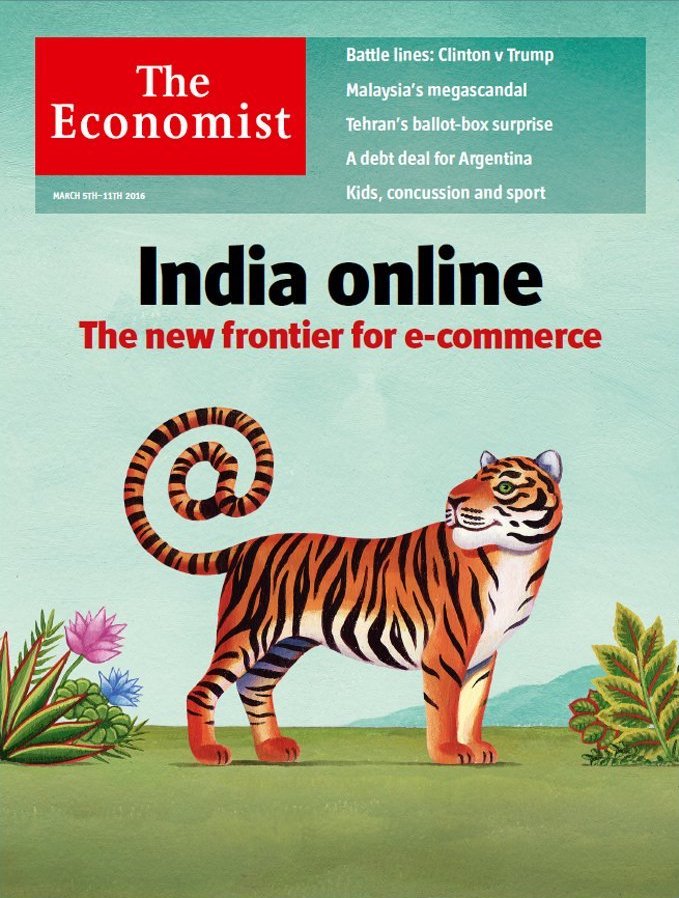 The Economist magazine cover for March 5, 2016.

In June 2017, The Economist‘s cover titled ‘Modi’s India: The illusion of reform‘ called Modi more of “an administrator than a reformer” and said that perceptions of an acceleration in economic growth under his term were “deceiving”. 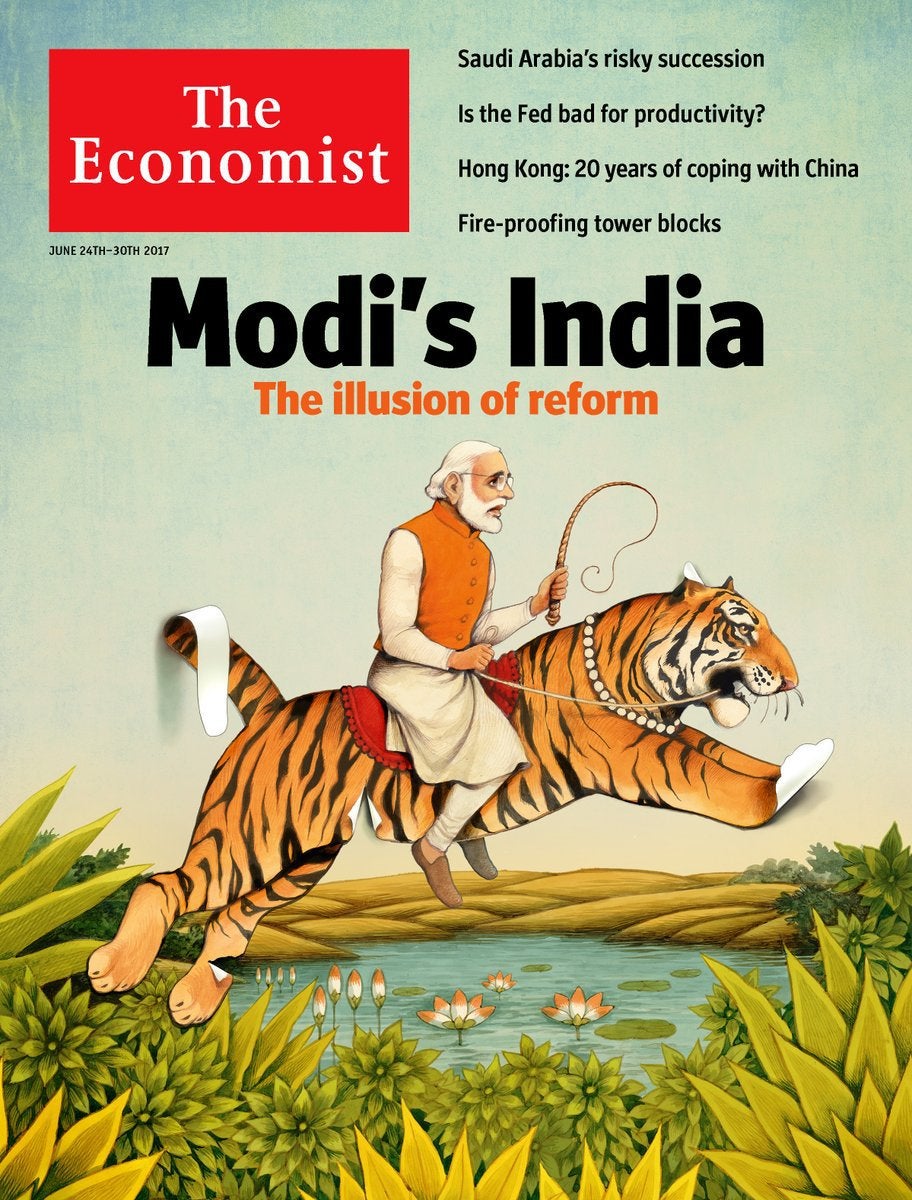 Calling the GST a welcome but unnecessarily complicated and bureaucratic reform, the editorial held that Modi’s government was the strongest in decades and that political conditions in India were “as propitious for reform as they are ever likely to be”. The magazine further said:

“Mr Modi’s admirers paint him as the man who at last unleashed India’s potential. In fact, he may go down in history for fluffing India’s best shot at rapid, sustained development. And the worries about a still darker outcome are growing.”

In 2019, days after the attack on a CRPF convoy in Pulwama, Jammu and Kashmir, The Economist unveiled its cover on February 28 titled ‘Modi’s dangerous moment‘ and expressed alarm at the rapid escalation of hostilities between the two nuclear-armed neighbours of India and Pakistan. 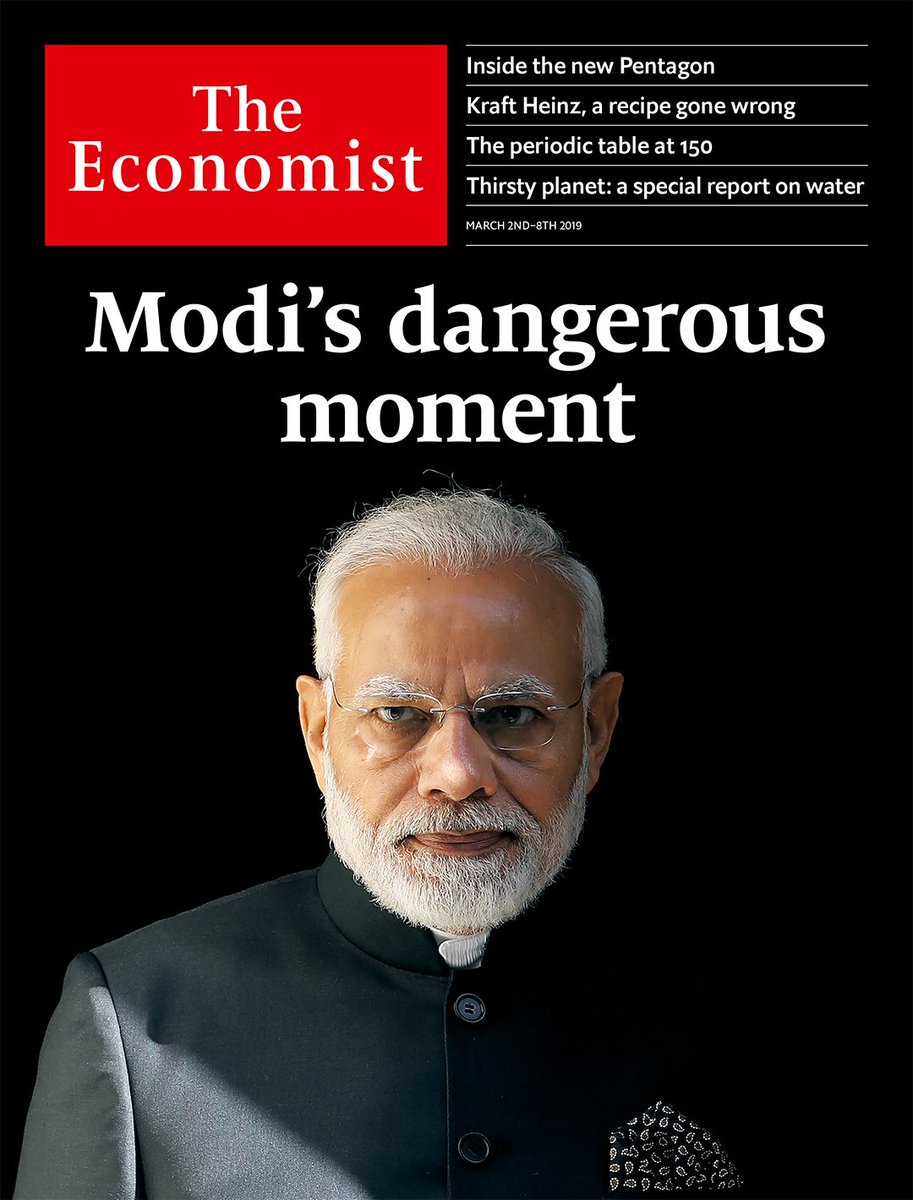 The Economist magazine cover for March 2, 2019.

The editorial also pilloried the Modi government’s hollow promises of reform. “Over the past five years Mr Modi has lived up neither to the hype nor to the dire warnings,” it noted and added that unemployment had actually risen under Modi.

Nonetheless, the magazine stopped short of accusing Modi of outright communalism and said:

“By the same token, Mr Modi has not sparked the outright communal conflagration his critics, The Economist included, fretted about before he became prime minister.”

The latest cover, however, would seem to suggest otherwise.