An analysis of social media posts and trends in the case shows how members of the BJP used words like ‘murder’ even as other parties used 'suicide', and how channels like Republic TV and Times Now picked up the baton. 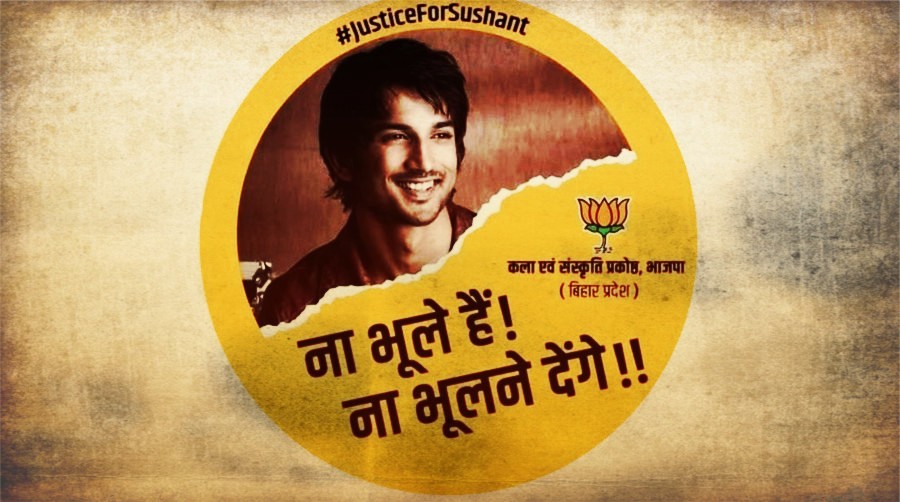 New Delhi: In the aftermath of Sushant Singh Rajput’s death, conspiracy theories that he was murdered swamped the internet. Among those behind the amplification of such theories on social media – ensuring that they remained cemented in the news cycle for months – were members of the BJP, a study conducted by University of Michigan has found.

The study, which looked at social media trends, handles, patterns and the tweets of politicians, influencers, journalists and media houses between June 14 and September 12, 2020, has revealed how members of the BJP and pro-BJP handles cranked up the rumour mill, and were behind the troll attacks on Mumbai police and many actors in Bollywood. Tweets by over 2,000 journalists and media houses and 7,818 politicians were studied, as well as the YouTube pages of mainstream television news channels.

The study found that 7,818 BJP and Congress politicians put out 1,03,125 tweets about the case. Whereas the Congress and other parties used the word “suicide” to describe the actor’s death, tweets by BJP leaders used the word “murder” instead.

The study also highlights the role played by TV news channels like Republic TV and Times Now, which cashed in on high TRPs over the months with their sensational coverage of the case. To this end, the tweets of 1,930 journalists and 239 media houses were analysed.

“The data show an important role played by politicians, especially the BJP, in proposing a ‘murder’ alternative to the ‘suicide’ narrative. There was a real opportunity to address mental health and depression early in news cycle, but the stories quickly devolved to allusive concoctions,” it says.

“That the audience has consistently rewarded news channels for following this story – including through meteoric ratings for the Republic news network which has offered the most aggressive coverage, are testament to the citizenry’s complicity,” it adds. “We found that the various actors – politicians, media houses, and journalists framed their own narratives in relation to the incident. These topical preferences reflect individual biases, perceptions, motivations and gains.”

On June 14, after news of Rajput’s death became public and the police ruled it a suicide, the conversation by and large stayed focused on mental health. Soon enough, after rumours that Rajput was allegedly murdered began to swirl, the scale began to tilt towards more internet chatter on murder conspiracies as the media began to focus on the angle of Rajput being an “outsider” in the film and Bollywood’s nepotism. 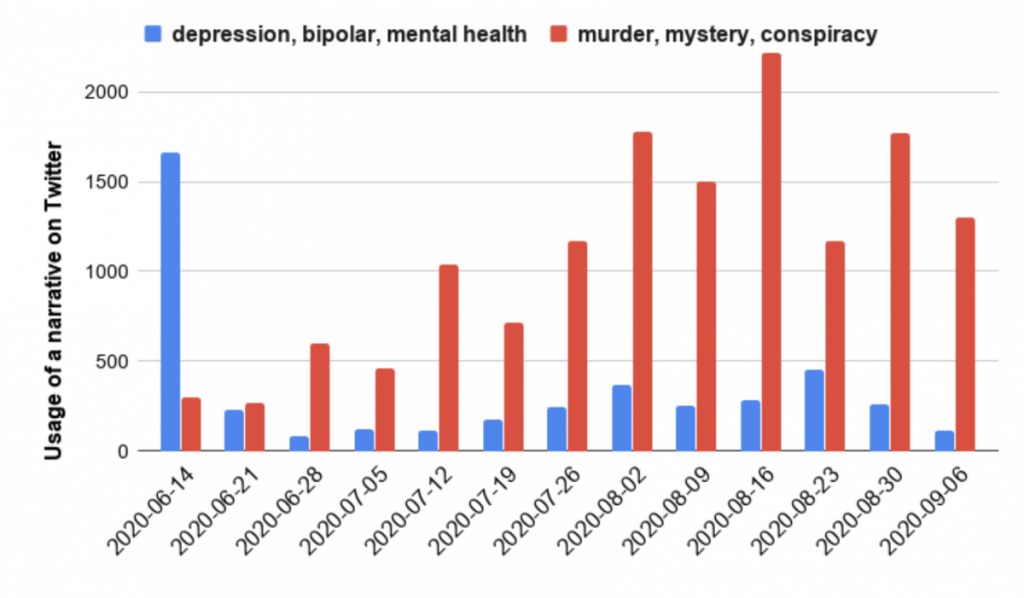 “The move towards conspiracies was accompanied by multiple supporting actors – the local police was proposed as incompetent, or in cahoots with the cabal, the state government itself was presented as nepotistic and inimical to the interests of poor outsiders,” the study points out.

The Mumbai police was trolled heavily in the days that followed “by various stakeholders, but particularly BJP politicians”, the study found.

Eventually, attacks were ramped up on the Maharashtra government as well.

“The attack on the police was used as a bridge into attacking the state cabinet, beginning with #AnilDeshmukhSavingSSRKillers (the home minister), #MahaGovtExposed, and eventually Aditya Thackeray, who is already one of the most trolled politicians in India,” the study reads.

The BJP was also accused of trying to politicise the actor’s death in light of the upcoming assembly elections in Bihar after it printed campaign posters that demanded justice for Rajput – the study found that after a peak in July, the number of politicians in Bihar talking about the case fell.

The data from the study also show that that BJP was much more aggressive than the Congress when it came to calling Rajput’s death a murder.

When it came to social media, Republic TV gained an edge over TimesNow in terms of retweets and reach, even though the latter had put out a greater volume of tweets. Overall, tweets and posts on the story “more retweets on average than tweets on other subjects”. 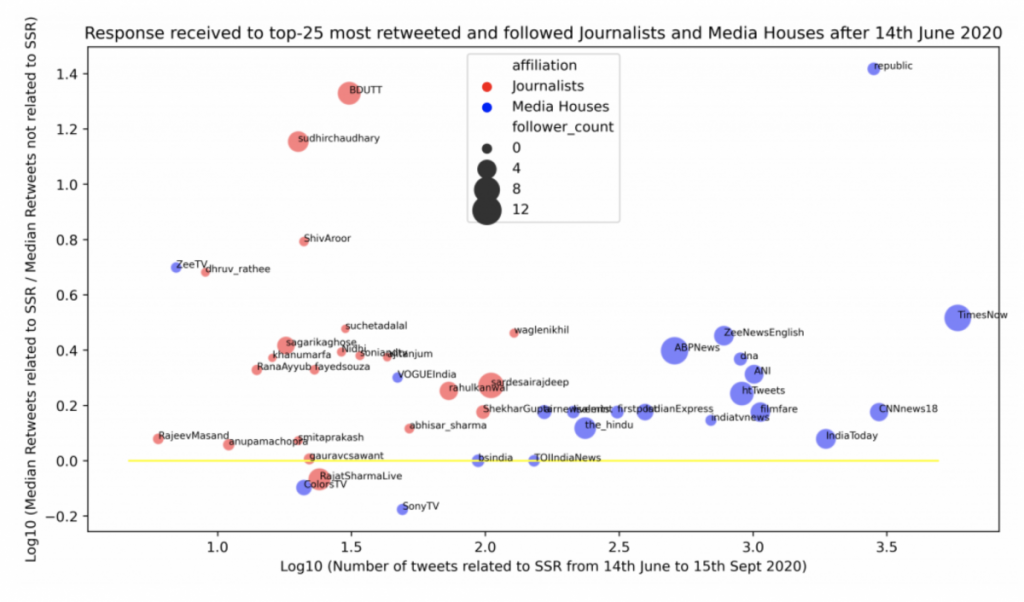 The study notes how the case came at a point where people were already “saturated” when it came to news about the pandemic, the ensuing lockdown and the rising number of cases in India. “The story offered a diversion. While the massive win for the actor’s posthumously released film offered a silver lining, the creation of villains gave people an object for vengeance,” the study reads.

As the weeks progressed, misinformation spiked out and many Bollywood actors fell under scrutiny as social media cast a wider net for villains in the case. The conclusion accompanying the University of Michigan study, which was conducted by Syeda Zainab Akbar, Ankur Sharma, Himani Negi, Anmol Panda, and Joyojeet Pal, also points out how the case is a reminder that “patriarchy is alive and well” considering how the male actor’s death sparked such furore online – something which was missing when female actors have died by suicide in the past only to be victim blamed.

“The victims of this case have mostly been women — Rhea Chakraborty was slandered and hounded, eventually ending up in jail without bail. As the scandal devolved into allegations about drugs – the Indian Narcotics Control Bureau summoned four movie actors – Deepika Padukone, Sara Ali Khan, Shraddha Kapoor, and Rakul Preet Singh, all women, and at the time of this writing, all intensely targeted by trolling and mainstream media speculation online,” the report reads.