S.A. Brelvi, Journalist and Secular Nationalist Who Stood Up to the British Raj

His paper, 'The Bombay Chronicle,' was a tireless supporter of the freedom struggle and suffered for it. 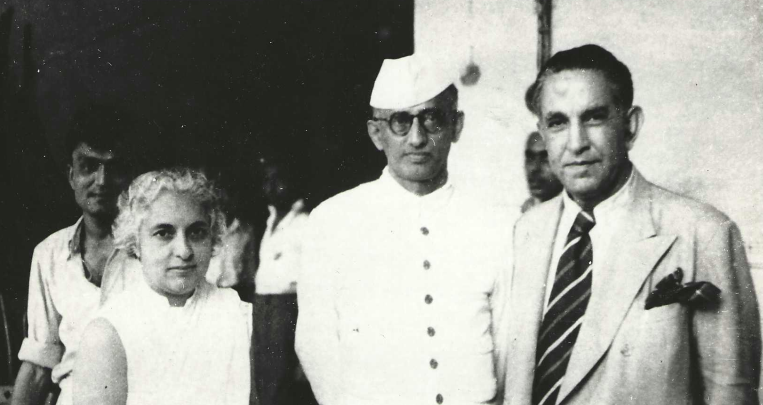 During India’s freedom struggle, many nationalist-minded journalists openly took on the British government and even paid a price for their open defiance.

The names of the brothers Ghosh, Sisir and Motilal, who started Amrita Bazaar Patrika in Calcutta, G. Subramania Iyer, who in Madras started The Hindu and Swadesamitran in Tamil, and Lokmanya Tilak of the Kesari in Pune, come to mind. All bravely wrote scathing editorials against the regime and were all found guilty of sedition.

One name, however, has been completely forgotten – Syed Abdullah Brelvi, under whose long stewardship The Bombay Chronicle flowered and came to be known for its professionalism, with a nationalist slant. Brelvi too went to jail twice, but stayed on course, much to the irritation of the British – and occasionally, sections of the Congress, including Mohammed Ali Jinnah. 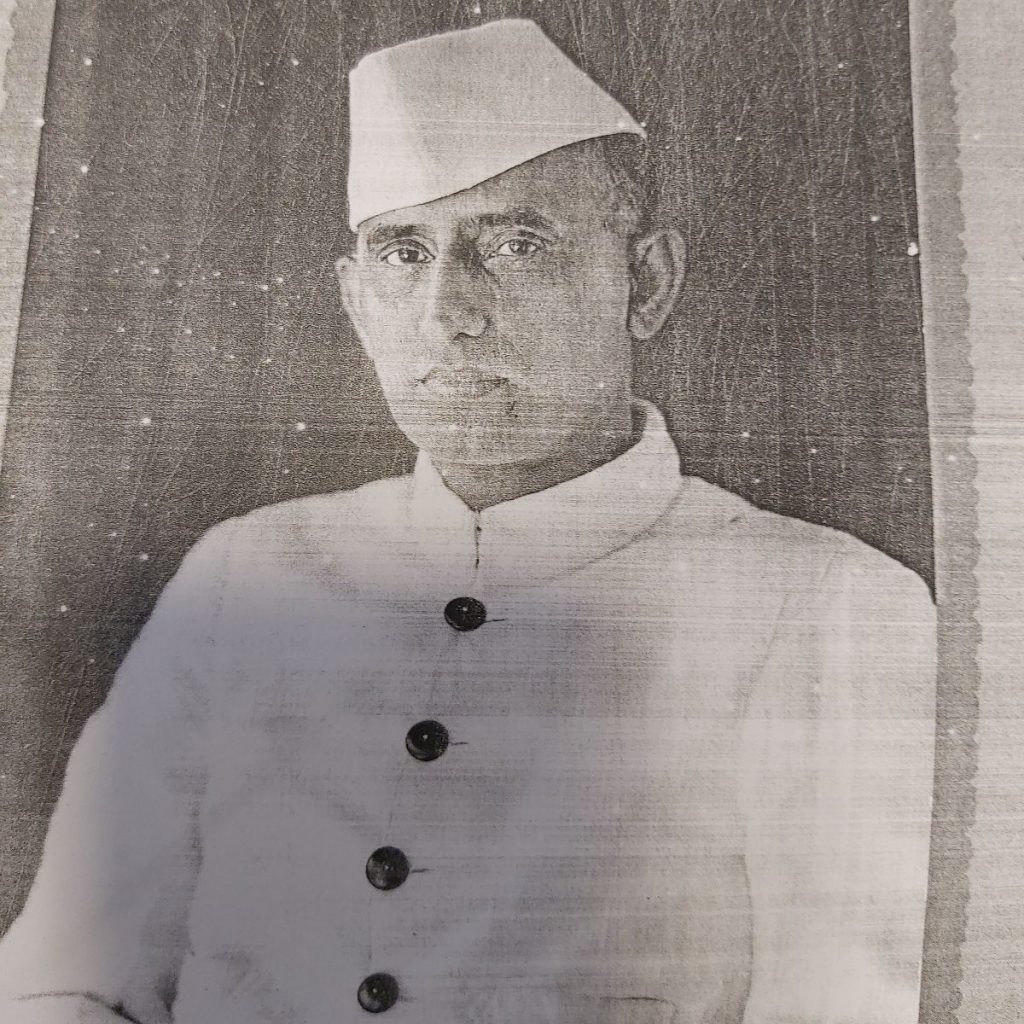 Brelvi was born in Bombay on September 18, 1891, to a family that had migrated to the city from Bareilly. He studied law and joined as an assistant editor in March 1915. The paper was struggling financially, as it would do several times over the next few years, but it had a loyal readership and was much needed to balance the pro-government media, so he and others stuck on.

The Chronicle had been launched in Bombay in 1910, by prominent citizens, led by Sir Phirozeshah Mehta, one time president of the Congress. The paper, in English, was pitched as a competitor to The Times of India, then considered part of the ‘Anglo Indian’ press and was priced at one anna, one fourth of the price of the Times.

Mehta hired B.G. Horniman, who was then at The Statesman, Calcutta. With his strident writing against the British and in favour of the nationalists, he was soon a thorn in the administration’s side and in 1919, he was dragged from his sick bed and deported to Britain following his paper’s scoop on the Jallianwala massacre. The governor George Lloyd tried often to control it, even introducing a provision whereby it would have to submit stories before they were published, but the Chronicle chose to shut down till this was withdrawn, which it was a week later.

After Horniman’s departure, another journalist, Mohammed Marmaduke Pickthall was named editor. Pickthall was an Islamic scholar known for his translation of the Quran. Pickthall, known to be pro-Khilafat, took positions that angered the board, chiefly composed of conservatives who were in general against Gandhi, who the Chronicle supported. Bombay, at the time, was in great political ferment. Gandhi had landed in the city from South Africa in 1914 and soon galvanised the nationalist movement with much support coming to him in Bombay. Textile workers were getting politically active and had stopped work when Tilak was imprisoned. The Chronicle was by then a crucial mouthpiece that everyone wanted to control.

Pickthall quit in 1924 and the post was offered to S.A. Brelvi. Brelvi had by then been in the Chronicle for several years, and had even functioned as the editor on several occasions. He, too, supported Gandhi and was firmly opposed to the Muslim League and against the idea of Pakistan. A close friend of Mohammed Ali Jinnah, their friendship was finally sundered in September 28, 1925, when, the morning after the breakdown of the Gandhi-Jinnah talks, Brelvi wrote a scathing editorial that claimed, “Jinnah’s attitude was not that of a leader endowed with the authentic spark of statesmanship,” and said he behaved like “an advocate, mechanically pleading from his brief.” 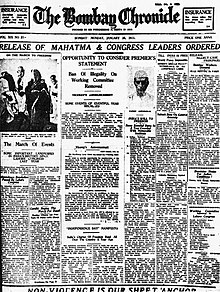 A Wikipedia image of the front page of The Bombay Chronicle.

Jinnah never forgave Brelvi, recalled G.N. Acharya, who had worked in the Chronicle, in a memorial lecture he gave in 1975. (The Chronicle staff at the time also had writers such as K.A. Abbas, who was its film critic.)

Brelvi had taken over amidst tensions on the Chronicle board and within the Congress. The Swarajists, who were keen to join the Council to fight from within the system – and had prominent people such as Motilal Nehru and M.R. Jayakar – felt the paper was critical to them and a supporter of Gandhi’s Non-Cooperation Movement. They wanted the paper to be their voice but lacked clout within the party.

Meanwhile, the paper was doing poorly. Nehru tried to raise funds from Bombay’s industrialists, but the attempts remained unsuccessful. Academic Milton Israel, in his book Communications and Power – Propaganda and the Press in the Indian Nationalist Struggle, 1920-1947, gives a detailed account of the power struggles within the Congress in Bombay and the attempts by different groups to get control of the Chronicle.

Brelvi was appointed, with the implicit understanding that he was keeping the seat warm for when Horniman – ‘The King Across the Kala Pani,’ as he was called – returned. The influential Swarajists also assumed he would give them full coverage that they wanted and had got used to. Brelvi had other ideas.

When a speech by Jayakar was carried in full in the paper, Brelvi decided that this would never happen again. From then onwards, the paper gave the group adequate coverage but continued to lean towards Gandhi. He himself was a committed Gandhian, always dressed in khadi sherwani and with a Gandhi cap on his head. The two carried on a correspondence, with Gandhi referring to him as ‘Brelvi bhai’ in his letter.

From 1924 to 1949, Brelvi remained the editor, barring a short, two-month hiatus in early 1926, when Horminan returned, slipping through the British net by exploiting a legal loophole in passport rules. The new stint did not last long and Brelvi was back again.

From then onwards, he continued to criticise the British, attacked Jinnah and the Muslim League, and appealed to the country’s Muslims to not get taken in by Jinnah or opt for Pakistan. The League and the orthodoxy disliked him intensely, and when Brelvi stood for elections as a Congress candidate, he issued an appeal in his paper ‘Vindicate Your Patriotism.’ The Chronicle ran a story about forged documents being used to malign his name.

In 1937, during the campaign for Bombay Legislative Council elections, the paper, in a strong editorial headlined, “Let Mr Jinnah Answer”, reminded the Muslim League leader of his party’s resolution in 1920: “The attainment of Swaraj by all legitimate and peaceful means”.

Brelvi was standing for the elections as a Congress candidate and the paper reported of the many ‘dirty tricks’ being played by his League opponents. Despite support from some influential people and even religious leaders, Brelvi, an implacable foe of a separate Muslim nation, lost.

Brelvi never changed his views – he and his papers remained big supporters of Gandhi, who by this time, had assumed a larger than life status, though he continued to have critics within and outside the Congress. Bombay had been a big supporter of Gandhi, with rich merchants – Gujaratis, Parsis and Muslims – backing him in every way. 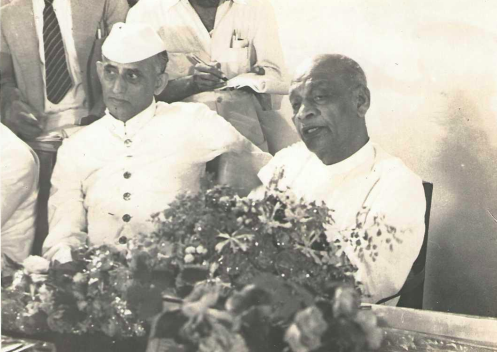 The paper was doing better and certainly giving a good fight to The Times of India, which remained anti-Congress. But the government kept on trying to suppress it, like it did with other publications in the city. In 1930, he was sentenced to a simple imprisonment for five months and had to pay a fine of Rs 250. He did not pay the fine and had to spend a month more behind bars.

In 1932-1933, he was once again sentenced to simple imprisonment for 18 months. “Both sentences were connected with journalistic reporting of news unfavourable to the British government,” wrote S.G. Haider in a profile of Brelvi for a book on well known Indian journalists published by the Children’s Book Trust. At a trial, he refused to pay a bond or sign of surety for granting bail and was locked up in prison. Many influential supporters and the other nationalist papers demanded he be transferred to a better class of jail, but he did not make any such request, Haider writes.

Brelvi was engaged in Bombay public life, feeling equally at home with dignitaries and fellow citizens. He was involved in co-operative banking, adult educations and even the labour movement – he had been a member of the Joint Strike Committee which organised the nine month-long textile strike in 1928. As a speaker of many languages, when he once expressed an interest in learning Hindi, Gandhi wrote: “Since you know Urdu and Persian as well, Hindi is child’s play. You should be able to read The Ramayana of Tulsidas in the original…You will exclusive the presumption please.”

Brelvi was devastated when Gandhi was assassinated. “Mahatma Succumbs to Assassin’s Bullet,” was the banner headline on the morning of January 31, 1948. The front page was full of detailed reports, with Nehru’s “light has gone out from our lives” speech displayed prominently.

Brelvi himself died the next year. He had survived a heart attack in 1945 while he was on a trip to Calcutta. “Fortunately, he remained in the capable hands of Dr B.C. Roy,” who was a physician and also, at the time, the chief minister of Bengal, writes Haider.

Tributes for Brelvi came from leading figures. Journalists like Brelvi were “more needed (now than ever (before),” said Jawaharlal Nehru and Vallabhbhai Patel called him, “a valiant fighter in nation’s struggle for freedom; a confirmed nationalist and convinced holder of freedom of Press.” Large crowds turned up at his funeral.

The Bombay Chronicle itself shut down permanently in 1959, unable to stay afloat in a changing environment and faced with the growing competition of well-funded giants such as The Times of India.

Brelvi’s name is unknown today and there is nothing, besides a small street in Bombay, to commemorate him. There are no books by him or by him, no Wikipedia page, no other references on the internet and not even an image online. Copies of the Chronicle, of course, are only found in dusty libraries. Hardly anyone shows interest in them.

He deserves to be remembered not only for his journalism in the face of tremendous odds, but also for his patriotism and his commitment to a secular, liberal and democratic India.

“If a modern Diogenes were to hunt out for Indians with his lantern in these days, he would be sure to come across fervid Hindus, bigoted Muslims and fanatical souls deeply engrossed with the problem of tirelessly finding out how unjustly their own particular community was being treated, and he would have to ask in sorrow: “Where are the Indians”?”, he wrote in 1926. These words ring true even today.