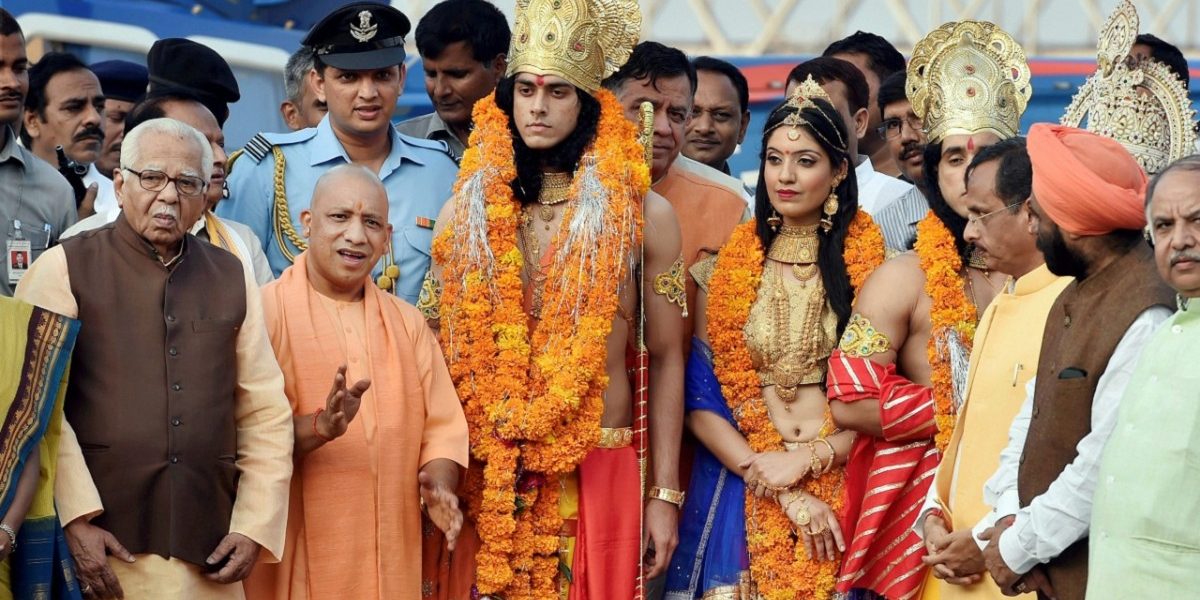 In an article, the BJP is reminded very specifically that it only managed its win on the back of 'Shri Ram'. Photo: PTI

New Delhi: From several political developments in parliament to yet more accounts of violence in the name of ‘Jai Shri Ram’, India had yet another eventful week – cricket matches notwithstanding.

In parliament, in the lower house, Trinamool Congress MP Mahua Moitra gave an electrifying speech in defence of democracy that marked her as a leader to watch.

Accolades were also showered on home minister Amit Shah after his ‘major victory’ in Rajya Sabha – getting the Bill approving President’s Rule in Jammu and Kashmir for a period of six months passed, as well as for passing the Jammu and Kashmir Reservation (Amendment) Bill, 2019.

There appears to be a very concerted effort underfoot to brighten the image of Uttar Pradesh chief minister Yogi Adityanath. Scores of articles having been making their way into the news, much like this one, on how the saffron-clad CM is changing the face of UP, be it law and order, infrastructure, trade, health and administration.

“With Adityanath at the helm, the state has been able to arrest professional complacency, there is visible activity in the corridors, apart from the conspicuous absence of tobacco stains.”

From Thane in Maharashtra to Kanpur in Uttar Pradesh, thrashings in the name of Ram continued.

The lynching of Tabrez Ansari in Jharkhand, again caught on video, for simply being ‘Tabrez Ansari’ was striking again for the impunity with which the collective assault was carried out.

It’s clear the slogan has gotten a hold in India, from parliament as a form of heckling to the streets as a form of bullying. Both the right and left discussed the popularity of the phrase, each presenting either opposing views or foundational reasons.

Commending the BJP for its landslide victory in the 2019 Lok Sabha election, Vinod Sharma, who wrote about “Rahul Gandhi being no simpleton” last week in Swarajya magazine, takes it upon himself to remind the saffron party of the promises it has made.

And to remember, very specifically, that it only managed its win on the back of ‘Shri Ram’.

“But for Shri Ram, BJP would still be languishing as a perennial loser at the national level. He gave BJP its first big win in Uttar Pradesh and, later, in the Centre. But the moment the BJP led by Atal Bihari Vajpayee formed the government, it consigned the promised Ram Temple at Ram Janambhoomi to the dustbin. People saw in it a betrayal of the worst kind, and in 2004, made it clear that they had not voted for a poor Xerox of the Congress party.”

This section was preceded by a reminder to Prime Minister Narendra Modi of the trust that voters have places in him and his “ability to deliver what he promises”.

“By that yardstick, there has not been another PM like him.

Though this has given him a heady win, it also means that the fall will be precipitous, if he fails to live up to expectations during his second term.”

Though the Modi government did not make any move toward making the Ram temple a reality in its first term, Sharma says the BJP “made every effort to assure its voters that that the party was committed to it, and needed a second Modi term to see it through”.

According to him, in 2010, before the Allahabad high court delivered its verdict in the case, “the usual ‘Hindu’ suspects were also pressed into service, allegedly at the behest of Sonia Gandhi’s Congress party, to call Shri Ram a mythical figure”.

“Ram is faith, as is Allah. In matters of faith, there never can be historical evidence or proof of the sort that courts of mortals require. Allah and Ram are real and living for those who believe and mythical for those who don’t. Allah revealed Himself to the Prophet through an angel no one else saw or heard. Ram revealed Himself to Valmiki, a Dalit dacoit who became a saint after much penance, and, later, to Goswami Tulsidas. This is the belief of their followers. They do not need any ‘proof’ of their existence, or of Ram’s birth at the Janmasthan.”

“In 1986, Rajiv Gandhi got the locks of the disputed structure opened. In 1989, he not only allowed shilanyas of the Ram Temple at the disputed site, but also began his own election campaign from Ayodhya with a promise to usher in Ram Rajya if elected. Had he lived and won power, there is little doubt that a grand Ram Temple would have come up, and much of what happened later avoided.”

It is “Sonia Gandhi, his Italian-born wife” who is to blame for the rise of “Islamic fundamentalists and Hindu-hating Marxists”.

“In 2014, many people, a large section of Hindus particularly, voted for Narendra Modi because he was quite unlike timorous BJP leaders who craved acceptance by ‘secular’ political parties and the Lutyens ecosystem, even if it meant betraying the causes they espoused and got votes for.”

“People see in Narendra Modi the leader they were looking for but never found, and will not accept any excuse from him for failure on this count. They have patiently made, suffered and seen off leaders who failed them, and have given Modi a historic mandate so that he can unlock the door that his predecessors were afraid to even knock, and give Ram Lalla the temple He has been patiently waiting for. They are now convinced that its time has come.”

Also read: #RightSideUp: Celebrating Misogyny in ‘Kabir Singh’; Why Rahul Is ‘No Simpleton’

For her fiery speech in Lok Sabha on the importance of dissent and early signs of fascism, Trinamool Congress MP Mahua Moitra came under fire even as she made scores of new fans.

In a piece for rightlog.in, ‘patriot, political analyst and amateur historian’ Akshay Narang takes great pleasure in pointing out – in a similar way as insults are racked up against Sonia Gandhi for having been an Italian citizen – that Moitra spent several years outside India.

This is a sore point as can be seen by way of the title itself:

The speech itself, which was lauded for pulling absolutely no punches, Narang says, was “based on bizarre analogies and flawed logic which makes a person look at everything in black and white without understanding the complexity of ground realities”.

It also, as he says, “hogged the limelight”.

In a rebuttal of the investment banker-turned-politician, who has asked how “in a country where ministers cannot produce degrees to prove that they graduated from college, you expect dispossessed people to show papers to show that they belong to this country”, he says:

“Therefore, just because a minister has allegedly misrepresented his educational qualification, illegal immigrants should not be pushed back to the country of their origin.”

Commenting on how the “liberal brigade celebrated her maiden speech as some sort of a milestone event”, he moves on to Moitra talking about India’s slide into fascism under the Narendra Modi-led BJP government.

To Moitra’s reference of a US Holocaust memorial museum poster put up in 2017 that “contained the list of all the signs of early fascism”, he puts not credence in her allegation that these signs are visible.

“It is highly illogical and mechanical to apply a straightjacket formula in order to make a judgment upon the prevailing political scenario. However, the liberal brigade is going head over heels clearly because Moitra is pushing an agenda that the liberal brigade has failed to justify ever since the Modi government came to power for the first time in 2014.”

Swinging back to his main point – of Moitra being an outsider – he says with a thin veil of sarcasm:

“This is rather extensive knowledge for someone who spent a major chunk of her life outside India. Moitra who is 44 years old had left for the US along with her family at an early age of 15. She studied economics and mathematics at the Mount Holyoke College in Massachusetts and went on to work as an investment banker at the JP Morgan, eventually rising to the post of company vice-president. She came back to India only in 2008 and joined the Congress. However, she later switched sides and joined the Mamata Banerjee led party.”

In the article, he also mentions Moitra’s assault of a woman constable at Silchar airport to make an obvious statement about her supposed character.

For these above reasons, he believes, she must be “unaware of how the Indian political system works”.

“One cannot help but doubt her realisation of India changing into something else given her life story and the fact that she has spent a major chunk of her life outside India.”