New Delhi: Kashmir may have been on lockdown for over 50 days now, but with all eyes trained on Prime Minister Narendra Modi in the US, the 50-day anniversary hardly made a blip in the media.

The ‘Howdy, Modi’ event has been branded a ‘great success’ and a ‘milestone in Indian diplomacy’ among other so-called metrics of success. Yet, even as most television news sites kept the focus on the event, they completely ignored the hundreds protesting outside the NRG stadium against the BJP government’s policies. Colourful posters spoke against the ongoing atrocities in Kashmir, the trampling of minority rights and the dangers of the last parliamentary session where the BJP, with its brute majority, passed a series of worrying bills and amendments. 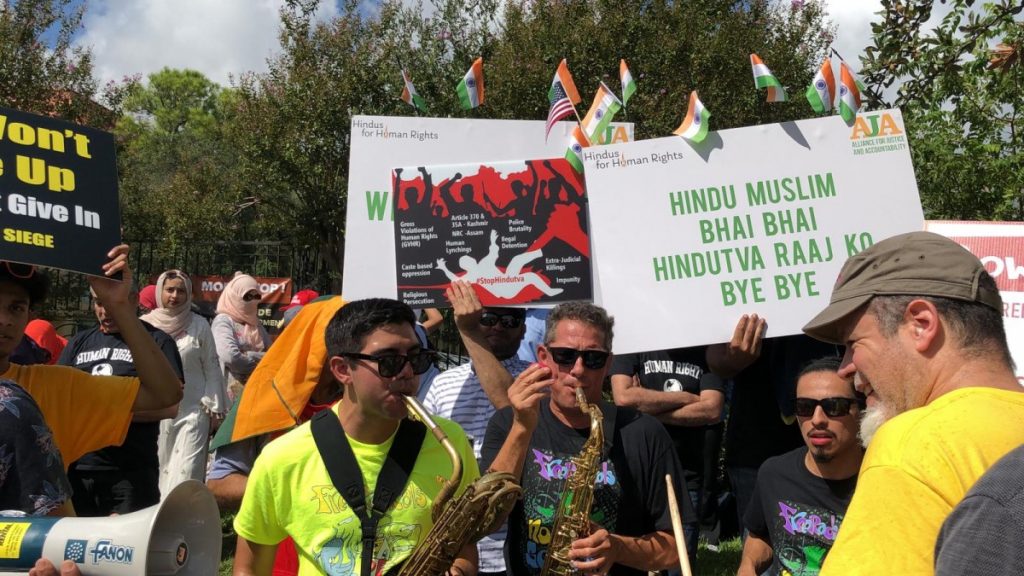 Protestors at the ‘Howdy, Modi’ rally in Houston, Texas on September 22. Photo: Alliance for Justice and Accountability

Rashtriya Swayamsevak Sangh mouthpiece Organiser published a series of articles on ‘Howdy, Modi’, each calling it a changing point in India-US relations – never mind what US president Donald Trump said afterwards on India’s stance on Pakistan being “very aggressive”.

In one such article, written by Priyanka and Rajesh Ranjan, an engineer plus Art of Living facilitator and an MBA gold medalist from IIM Calcutta respectively, Modi is lauded for his “charismatic leadership and marvellous diplomacy”.

The two also joined the bandwagon of making a huge deal of the prime minister picking up a fallen flower at the airport upon his arrival. Along the way, according to the article, it seems he picked up many hearts as well.

“The whole world was eagerly waiting for ‘Howdy, Modi’, and Modi took the whole world in a surprise, moment he reaches the USA, by bowing to pick the flower that fell on the ground. Netizens on twitter appreciated Mr. Modi for his humility and simplicity.”

The description of the event stands as thus:

The Ranjans say that it was a moment of pride to hear the prime minster boast of his government’s apparent success in “rural sanitation, cooking gas accessibility, rural road connectivity and others”. This, they say, is proof that “Modi’s ‘New India’ vision is not only about ‘Ease of doing Business’ but also ‘Ease of Living’.”

“When the American president recognises radical Islamic terrorist as a threat to the world and border security and supports Article 370 ‘abrogation’ from Kashmir, it’s a true win for the diplomacy of India on the global stage.

In another article for Organiser, financial consultant Mayank Gupta speaks of the event being a turning point for India-US relations. In an attempt explain why Trump would “share the dais… amid chants of Bharat Mata ki jai” with Modi, he writes:

“The Howdy, Modi! event was probably the first-time ever when the American President Donald Trump used India-US Flag combination as his presidential lectern, replacing the presidential seal. No detractor of PM Modi, or for that matter President Trump, can undermine the importance of this. The opposition parties of India may find it uneasy to praise how PM Modi scored an exemplary diplomatic point by convincing the US of not only abiding by the old rules of bilateral relations but at the same time look for new avenues.”

According to the article, thanks to the US-China trade war, India is coming out on top.

“India is being considered by many American companies as one of the most favourable destinations for establishing production facilities and reaping the benefits of affordable labour and the recent strides India has made in the Ease of Doing Business Index,” Gupta writes.

“There is little doubt that Modi has made a strong pitch for a new India-US alliance that goes beyond just business or politics,” he writes. According to him, anyone who listened to Modi’s speech “would have gotten the impression that he was speaking to voters back home as he listed the social and economic achievements of his first term”.

“However, to presume that the speech was all about voters back home would be a reductionist idea. At least as important a purpose was to demonstrate India’s growing clout, both at home and even in the US.”

Commending Modi’s skill of being able to market himself so exceptionally well, Jagannathan writes:

“Which Indian politician from any party, from Jawaharlal Nehru down to Indira Gandhi or even Atal Bihari Vajpayee, could manage to send this powerful message to US politicians in the past? This is Modi’s single achievement, and no matter what the critics say, it is a huge gain for India, our soft and hard power. We may not have arrived, but the announcement of our impending arrival has been made.”

On Trump’s mention of “radical Islamic terrorism”, the editorial director says that “Trump scored big with the Houston crowd of over 50,000 Indian-Americans by underlining the religious nature of the kind of terrorism the two countries face. It will go down well with Modi’s political base”.

“There is little doubt that Modi has – despite a prickly relationship over Donald Trump’s protectionist threats – made a strong pitch for a new India-US alliance that goes beyond just business or politics.”

Also read: #RightSideUp: Pomp and Pageantry on Modi’s Birthday; ‘One Nation, One Language’

The Frustrated Indian, in its article on the event, said that the “US has finally witnessed first hand the might of PM Modi”. The author Akshay Narang, speaks of how Modi “did not mince his words” in his “”phenomenal speech”. “PM Modi was clearly the centre of attraction of the grand event,” he writes, perhaps forgetting that the name of the event was ‘Howdy, Modi’ and thus centred on the prime minister by default.

The hero worship continues through the rest of the article. Sample this:

“The manner in which PM Modi spoke, the setting of the event and the way PM Modi was able to capture the imagination of the audience, absolutely everything about the Houston event showcased PM Modi’s might.”

On Modi’s statement on the reading down of Article 370 being a good thing for Jammu and Kashmir, Narang tries to point at how apparently “an entire ecosystem has been only furthering the massive misinformation campaign started by Pakistan”, never mind the human rights stories emerging from a beleaguered Kashmir.

“By making a bold remark on this issue right ahead of Pakistan PM Imran Khan’s meeting with the US President Donald Trump, PM Modi has, comfortably and gracefully, given a stern message not only to Pakistan but to the entire ecosystem which must have been left aghast even as PM Modi spoke eloquently from a clear position of strength. This single aspect of his speech captures the broad theme of the event, a clear display of the might of the head of government of India.”

“The Houston event marks the emergence of PM Modi as a truly global leader. From being denied Visa by the US in 2005 when he was the Chief Minister of Gujarat, following the relentless propaganda against him, PM Modi has really come a long way. Having returned for a second term, PM Modi has emerged as a bold leader at the global level backed by a humongous mandate and unbeatable domestic popularity.”

Adding to the above voices of adulation was newsbharati.com, which recently brought out a special coverage section on all things Modi.

A screenshot of newsbharati.com‘s homepage.

The fracas at Jadavpur university on the day Babul Supriyo, the Union minister of state for environment, forest and climate change, was to speak at an event organised by Akhil Bharatiya Vidyarthi Parishad (ABVP), took a violent turn last Thursday.

As it happened, students showed Supriyo black flags upon his arrival in protest against the event. While Supriyo stood his ground, creating an impasse that lasted hours, members of the ABVP terrorised the campus and protesting students with sticks and other weapons. They proceeded to thrash students, start a fire, vandalise the Arts Faculty Students’ Union, the UG Arts building and a few shops near Gate no. 4 of the university.

Despite photographic and video evidence of the unrest at the university, Supriyo has stuck his ground and claimed it was he who was heckled and protesting students who were at fault.

Unprecedented in the volatile history of struggle and protests at #JadavpurUniversity
At about 7PM, BJP goons started a fire in front of gate 4! They eventually entered and vandalised the Arts Faculty Students Union room and UG Arts building.#gobackABVP #noplaceforfascists pic.twitter.com/eUGm1oSzC2

The Organiser rallied in defence of Supriyo and published two articles very similar to one another – essentially on how the “Left exposed its vicious fangs at Jadavpur” and “shamed India’s democracy in the name of protest”.

In one such article, the national joint organising secretary of ABVP, Shriniwas, claims the disturbance on campus was a deliberate “conspiracy to dislodge the minister’s address”.

“The Left leaning student’s organisation SFI and others created ruckus. They are trained to do so… When the students of JNU in 2016 tried to vandalise the teaching and non-teaching practices and slogans were being raised that India would be torn into bits and pieces, Jadavpur University became part of it. Radical student’s wing supported JNU’s left wing agenda on campus.”

Shriniwas claims that with “an upsurge of ABVP, left wing student groups have become restless”.

“Their patrons who are teachers are more worried. Their fort is under threat. That is why they are using the violent method in sheer rage of losing the battle. For the left intellectuals campuses were .their shops. They did whatever they wanted. The compromises were being made between the Congress and Left parties. The congress was given the parliament to run the political show and the left handled the universities.”

The article continues to make even more ridiculous statements:

“The mixing of two streams; radicalism and secularism developed a new generation of intellectual. They turned to be India-haters. Seminars and conferences were organised from the taxpayers money to dislodge and dismantle India. The demeaning India spree invited western attention and accorded them with prestigious prizes. The JNU and few other universities became the hub of anti-national activities.”

According to their idea of India, military and Paramilitary forces are killers and rapists and the Naxals are true champions of democracy.”

The ABVP national joint organising secretary then commends the BJP student’s wing and writes that “the ABVP thought process” is challenging the idea of “anti-India activism in campuses”.

“It won hearts and minds of young people…Its motives are very candid and straightforward…With the rise of ABVP, disgruntled left wings are opting for violent method to create ruckus. They did it in JNU in 2016 and they tried out in Jadavpur University a few days ago. But ABVP is determined to work relentlessly for the cause of Mother India.”

He ends with what can be seen as warning to those who oppose the policies of the BJP and ABVP.

“The left wing in the campuses are likely to be wiped out completely.”