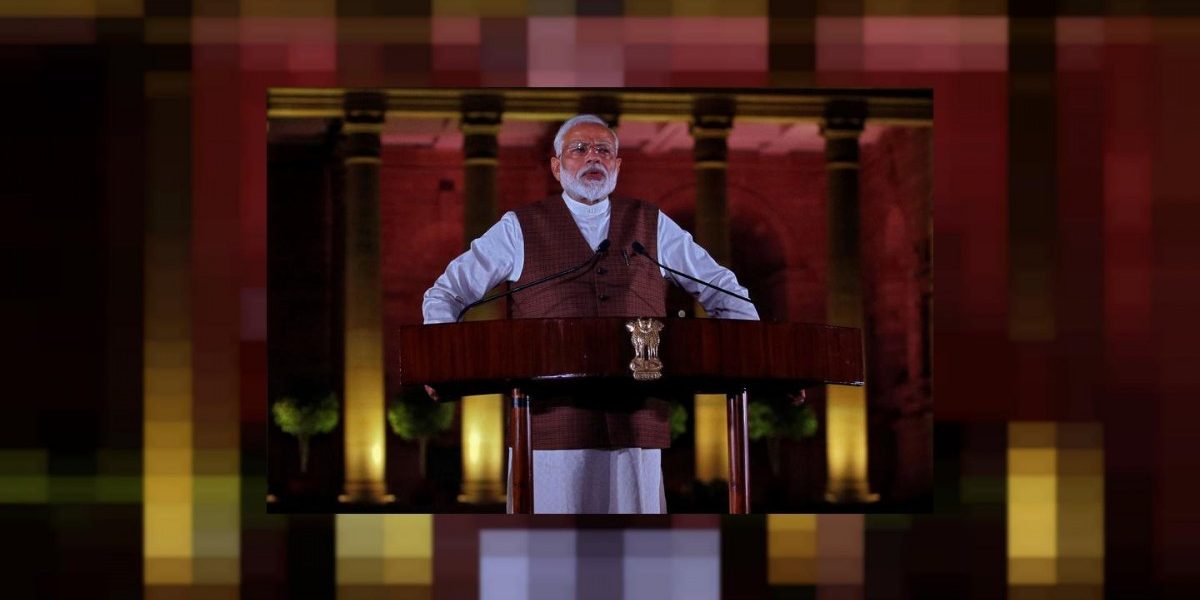 Prime Minister Narendra Modi speaks to the media after meeting with President Ram Nath Kovind to stake claim to form the new government in New Delhi, May 25, 2019. Photo: Reuters/Altaf Hussain

New Delhi: Over the past few days, reports have flooded in from parts of north India of minor girls being brutally raped and murdered. Even as the Kathua verdict gave some semblance of justice, accusations of ‘communalising’ the rapes – emerging from both the left and right – have been flowing fast and steady on social media.

Press freedom also continued to suffer; the muzzle is clearly getting tighter. Over the weekend, the Uttar Pradesh police arresting three journalists – Prashant Kanojia, Ishita Singh and Anuj Shukla – for ‘defaming’ chief minister Yogi Adityanath by sharing/broadcasting a video of a woman who claimed to be Adityanath’s lover saying she wanted to spend her life with him.

Kanojia, a former staff reporter with The Wire Hindi, was granted immediate bail by the Supreme Court on Tuesday. Read what right-wing websites had to say about his arrest here.

Millions across the world have also been glued to televisions with several exciting sporting events, from tennis to cricket. In the midst of the ICC World Cup, M.S. Dhoni’s sartorial choices created quite a stir and left many cheering for his “brilliant display of patriotism”.

#DhoniKeepTheGlove trended for a while, but the cheers soon turned to boos when the International Cricket Council (ICC) turned down a request by the Board of Control for Cricket in India (BCCI) to allow Dhoni to sport the military insignia.

The CPI(M) also finally opened up about its electoral losses and acknowledged how its vote bank in Bengal, out of dislike for the Trinamool Congress, had been swept along with the BJP wave.

Here’s a snapshot of the view from the right this week.

‘Modi and the world: here be dragons’

India is getting that most precious of gifts: a second chance. Prime Minister Narendra Modi can now put India on a trajectory to becoming a major world power.

The opportunity existed at Independence in 1947 (as documented in the original BRICs report from Goldman Sachs), but it was fumbled then, and especially in the 10 lost years 2004-2014 when the nation regressed by 20 years. But now there is a window of opportunity to rise and to craft a grand narrative that competes with America’s and China’s, and to be the third pole in a G3.

But the path will not be easy, as there are many threats, both “domestic” and “international”. Srinivasan’s list of domestic threats include “the parts of the state decimated by decades of graft, corruption and nepotism: academia, media, bureaucracy and judiciary”.

The constitution too requires “urgent attention”, Srinvasan, who worked in Silicon Valley, says, adding that “despite the prime minister’s gesture in bowing to the constitution, he knows as well as anybody else that it has flaws”.

Some have advocated a wholesale rewriting of the document as a short, 10-page document that will be adjudicated by a Supreme Court that confines itself to constitutional cases.

But at least ameliorating the most damaging bits should be a priority.

After tackling India’s challenges on the economic front, where he optimistically says that though Nirmala Sitharaman may have “her work cut out for her, it’s not a huge stretch”, he moves on to the “fabled Four Horsemen of the Apocalypse which are upon us in different incarnations: climate change, unsustainable exploitation of the planet, (trade) wars and terrorism”.

Srinvasan, an IIT Madras and Stanford Business School graduate, expresses basic alarm at India’s situation on the environmental front, quickly tackles the concern of terrorism in a short paragraph, and moves on to what he call the “most worrisome, and under-appreciated, threat” – a narrative that was “manufactured in the Indian mainstream media” and was picked up by “famous Western media brands, which appear to have a disproportionate influence on global opinion”.

The narrative has changed over time. Earlier, the image of India was of a benighted place, with naked, dark people starving to death because of over-population. Kind Westerners donated food to stave off mass starvation.

Later, the narrative changed. It became what the US activist Rajiv Malhotra calls the ‘cows-caste-curry’ meme. India is full of sacred cows, Hindus invited all sorts of societal problems with the horrid caste system, and Indian food is something called ‘curry’. Then it changed slightly again. With the storied success of software engineers, and the visibility of doctors of Indian origin, the model-minority moniker was increasingly applied to Indians.

But now there’s something much more sinister about the narrative on Hindus and India. It is demonisation, blunt and ruthless.

One way is to do nothing, and believe that India is “too big to fail”, as was said of major banks.

On the other hand, benign neglect may be counter-productive. The rabidness and foaming-at-the-mouthness of the international media have increased apace. It is a vicious cycle: India’s mainstream ‘Lutyens’ media, increasingly excluded from access to power, and thus losing the ability to broker deals, is furious. It invents #fakenews painting a picture of doom and gloom (fascism and religious tyranny are favourite memes). It is convenient for lazy foreign correspondents to just mouth these fantasies in their papers.

The columnist ends by saying:

India has to avoid having a narrative imposed on itself. It has to take media management seriously and start setting up Kalidasa Institutes abroad. That’s a necessary part of building the Indic Grand Narrative.

Also read: #RightSideUp: ‘The End of the Road for Liberal India’

In RSS mouthpiece Organiser, Purva Bhatt, an assistant professor at St. Xavier’s College, picked up the baton of ripping into ‘left liberals’ and of explaining why the BJP win is a rejection of “the intellectual sermons of the Nehruvian socialists”, who are afflicted by “paternalistic secularism”.

The results, she says, were a “triumph of common man’s wisdom over elitist hypocrisy”. In her barbs against the “intellectual oligarchs” who are “the upshots of Macaulayian legacy”, she says:

Their intellectual thinking that revolved around the premise that Indian ‘subjects’ were begging for imperial supervision and were blessed to be ruled by the colonial masters… The members of this cabal carry the view that Indians should be indebted to Vasco Da Gama for discovering India, colonial masters for making them read and write, Mughals for blessing them with biryani.

The drawing room discourse of these elites often concerned with the need to civilise the Indians on almost everything from scientific temper to mannerism, semantics, morals, belief and even faith… Afraid of being labeled as bigoted, regressive and archaic by these elites, the middle class consequently felt embarrassed to overtly express their faith.

This is why, she says, that when Modi publicly performed religious rituals, he was sending a message, one which was “emphatically received by the masses, the subaltern voices that were hegemonised by the heirs of colonial masters”.

The middle class who were made to feel lesser order beings for having a faith, perspective and belief different than these elites felt no need to be apologetic about their values and beliefs with which they’ve been socialised. They got the gumption to be unapologetic about themselves.

Bhatt continues with a few paragraphs on secularism, from theories about its inclusion in the constitution to why secularism as a concept doesn’t work in India “incautious cultural appropriation or rather misappropriation” of an idea that has its “epicentre outside India”.

The Prime Minister’s brand of secularism could appeal to majority and minority alike and challenged the liberal’s brand of top down knowledge arrangement. Minority who were also fed up of being stuck in the shackles of political servitude and being treated as a monolithic bloc having the same set of aspirations.

This victory, she signs off, was “a message to the Yale and Stanford degree holders that the common man refuses to be told how to behave any more”.