#RightSideUp: A Kashmir State of Mind; An 'MRI Report' for the Ages 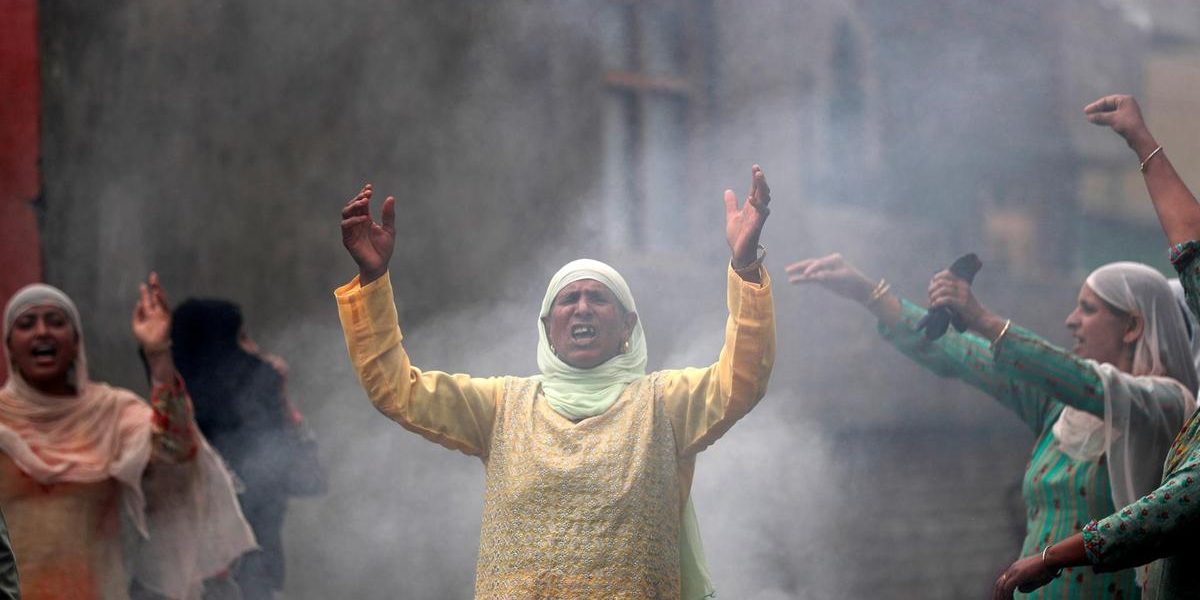 Women shout slogans during a protest in Kashmir after the reading down of Article 370. Photo: Reuters

New Delhi: The clampdown on Kashmir continues amid stormy debates even as the fate of millions in the Valley, whose rights have been brazenly violated by the Indian state, hangs in the balance.

The hardened sentiments of those in the subcontinent continued to deluge social media even as Kashmiris themselves remained voiceless for yet another week since the August 5 reading down of Article 370.

The rift on social media is wider than ever – a simple look at comments under stories published by media organisations striving to tell the truth of the situation on the ground – on either Facebook or Twitter – makes that clear. Right-wingers and so-called nationalists are leaving no stone unturned to brand any reports of violence arising from the Valley as ‘fake news’. Among those being ‘boycotted’ for their reportage are the likes of Reuters, AFP, BBC and the New York Times.

Even Lancet has not been spared, with the Indian Medical Association “withdrawing its esteem” for the 187-year-old medical weekly after it published an editorial slamming the Modi government, saying the presence of security forces “raises serious concerns for the health, safety, and freedoms of the Kashmiri people”.

“It is amounting to interference into an internal matter of Union of India. The Lancet has reacted to an internal administrative decision of Government of India under the garb of concern for the health of Kashmiris,” said the letter signed by Santanu Sen, national president of IMA.

Even a fact-finding report released last week by a group of Indian civil society activists that detailed the brutality of the military siege – arbitrary detentions, use of pellet shotguns – found no takers on the right, and the group was not spared from a deluge of hate.

As several mainstream media outlets continue to toe the BJP government’s line, insisting that everything is “calm” and “normal” in the Valley, this refrain has also dominated right-leaning websites, with many still in apparent awe of the move.

The truth of Kashmir

There was yet more outpouring on Kashmir by RSS mouthpiece Organiser – which otherwise has an incredibly slow track record in publishing stories.

In an article titled ‘Liberation from Slavery’, Deepak Zazia of Srinagar talks of how revoking Article 370 has “ushered in a dawn of hope for thousands”.

In this ground report, Zazia visits Rajouri in Jammu region where he reportedly saw crowds of Muslims chanting “Madray Batan, Hindustan Zindabad!” while holding national flags. The article is includes several quotes from locals talking about how a new era of economic growth will now be delivered.

A BJP local leader is quoted as saying: “I am overwhelmed and emotional watching Hindu-Muslims dancing on nationalist beats which is a tight slap on those who are running false and fake agenda on J&K.”

“We have been duped in the past by three families namely Abdullahs, Muftis and Nehrus for their own benefits,” one local tells Zazia.

In another article published on August 19, Brig Anil Gupta, “a Jammu-based political commentator, columnist, security and strategic analyst”, talks of how the Modi government has “put an end to corruption, injustice, and nepotism in the state”.

“Every citizen will now enjoy similar benefits and privileges and none will be treated as ‘second class’ citizen.”

“The gender discrimination will no more exist and all daughters of the soil will be treated equally.”

The brigadier then pushes out a garbled version of history, likely borne of WhatsApp forwards, and slams Sheikh Abdullah for playing “the biggest constitutional fraud with the people of J&K”.

According to him, local leaders, “under the garb of 370 and 35A… have amassed huge personal wealth disproportionate to their known sources of income”.

He then repeats the same party line ad nauseam of supposed “peace” in the Valley:

“People will hold them accountable for their sins and misdeeds if everything is normal and hence their attempt to create chaos through a planned disinformation campaign based on presumptions like loss of identity, land and jobs. To achieve their sinister aim they are also resorting to rumour-mongering and fake news. A disturbed environment rather than peace suits them well.”

His final words bear a warning for India’s Rohingya refugees:

“The government also needs to address the issues of illegal migrants and Rohangiyas as they pose a serious challenge to the safety and security of the country.” 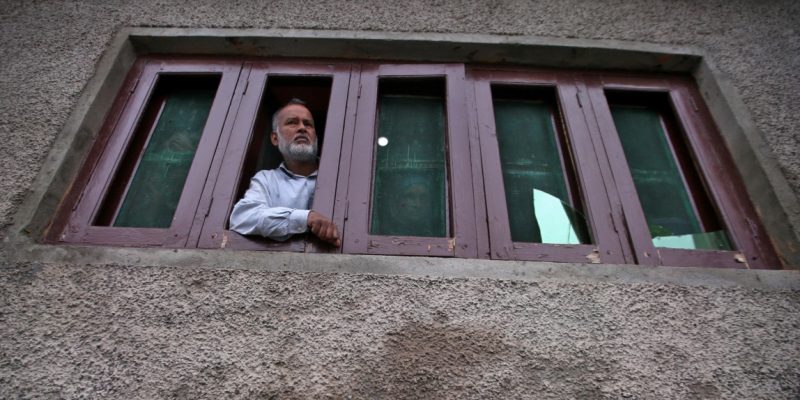 A Kashmiri man looks out from a window of his house which was allegedly damaged by Indian security forces, in Srinagar August 17, 2019. Credit: Reuters/Danish Ismail

Swarajya magazine’s R. Jagannathan has also been on a roll when it comes to Kashmir. Joining the chorus by addressing the so-called “spate of anti-India news in Western media”, he says the Modi government must “use the opportunity… to push bolder economic reforms”.

For this, he says, “Modi could take a leaf out of Atal Bihari Vajpayee’s notebook” from after the “1998 Pokhran-II blasts, when India was in the international doghouse”.

He refers to the launch of the Golden Quadrilateral highways development programme, how “controlling stakes in Maruti were handed over to Suzuki for a hefty premium” and how the Electricity Act was amended.

Urging Modi to walk down a similar path and show the world where India truly stands, he says, “Put simply, Vajpayee’s reforms were as much prompted by necessity as conviction.”

“If Modi is to seize the initiative and silence his foreign critics and help India reverse the current slowdown, he has to do a Vajpayee. This is the right time for staking a claim to the title of India’s biggest economic reformer since Narasimha Rao.

It should also be satisfying to call the bluff of Britain, China and other countries trying to fish in the troubled waters of the Dal lake.”

In another article, Jagannathan advocates an “effective counter” to China and Russia’s bid to “embarrass” India on the United Nation Security Council stage.

“If the unfriendly actions of our enemies and friends have no consequences, it means India can only bark but not bite. This is not how a future major power should behave.

The first country that needs a dressing down is Britain. It is clear that Britain’s colonial obsession with separatist politics in the subcontinent, and its own domestic political need to pander to a growing Muslim population, are driving this anti-India action.

In the case of China, too… while one should avoid any verbal fisticuffs in public – the Chinese may react badly to that – India should point out quietly that China itself is in occupation of Indian territory seized in the 1962 war (Aksai Chin), not to speak of the J&K slice that Pakistan handed over to it in the 1960s.

As for Russia… India will have to play a delicate balancing act, and make sure that Russia remains on India’s side even as we spread our defence purchases to other suppliers.”

An Independence Day article written by BJP national general secretary Kailash Vijayvargiya, and republished by Swarajya, waxes eloquent on how his party has set India on the path of success and of “defining new frontiers for the rest of the world”.

Under the decisive leadership of Prime Minister Narendra Modi and Home Minister Amit Shah, Article 370 – the divisive, restrictive and oppressive instrument of alienating Dalits, women and refugees from partitioned Pakistan – has been revoked.”

He congratulates Prime Minister Modi and home minister Amit Shah for making sure that Pakistan “has not been able to internationalise this issue”.

“The world respects India’s decision because we have been consistent and never aggressive.”

Vijayvargiya goes on about how the “architecture of governance has been fundamentally altered” and how Indians today “trust and take pride in the government and look forward to contributing in continuous improvements because they feel like equal stakeholders in the process”.

“We are just embarking on a glorious dual journey of self-improvement and global influence. All it needed was a firm push from a government that has only one guiding principle – national interest.”

Newsbharati clearly loves its exclamation marks; its home page is littered with headlines afflicted by the practice.

For example: ‘Traitors must not go Unpunished! SC lawyer files a case against Shehla Rashid for demeaning the Centre and the Indian Army‘.

The site’s opinion section is bursting full with articles on Kashmir and the end of the Congress.

In an article slamming the Congress for “taking refuge in the leadership of the ‘Mother Superior’ Sonia Gandhi”, the news team writes of how the Congress “needs to be purged of the Gandhi family”.

That article is incredibly tame when compared a piece of “fiction” put out by Organiser titled ‘An MRI Scan of the Congress Malady‘.

The article, written by Dr Govind Raj Shenoy, comes armed with this disclaimer:

“This Article is purely a work of fiction. All the characters and events mentioned here are purely imaginary and carry no resemblance to persons living or nonliving. No animals were harmed during the making of this Article (not 370).”

Describing how the Congress is presently in turmoil, he details how several party members have taken various stands on the revocation of Article 370.

But though many leaders have aired their views, Shenoy appears to plagued by this question:

“What are the “Big 3” in Congress thinking? The Nehru family inheritors, the torchbearers of “Idea of India” and “secularism”; what are they thinking?”

What follows is being reproduced here as the writer wrote it:

“Since it is impossible to diagnose what’s going on inside their minds, we had to connect all the MRI (Mind Reading Imagination) machines to look inside. Here is an honest attempt to delve deep into the minds of the Nehru family. And here are some of the thoughts we collected using the MRI machines.

Today, all the corridors of power in Delhi are swarming with these RSS people. I still remember those beautiful days when Indira-ji had put all these pests in jail in 1975. It was a mistake we didn’t finish them off during our rule. Now, this Modi guy has robbed our bank balances with demonetisation

Staying true to Nehruvian egalitarianism, our party supported and propped up the Hurriyat leaders like Syed Ali Shah Geelani, Mirwaiz Umar Farooq and Yaseen Malik. They had kept the Kashmir issue burning all these years. They had provided employment to hundreds of Kashmiri youth with those stone-pelting jobs…By sidelining all these people and robbing the Kashmiri youth of the stone-pelting jobs, Modi has struck at the heart of Nehruvian legacy.

Priyanka’s MRI report: I can not even giggle at the stupidity of this Modi and Shah combine. People might misunderstand it. By removing Article 370, they have made it easier for my Darling Robber oops Robert to acquire lands in the valley. With the kind of money we have, we can probably buy the entire state. We will then buy PoJK too.

Rahul’s MRI report: This morning, when I woke up at night, some idiot told me the BJP has removed Article 370 from the constitution. He was grumbling like that bear in the Mini Siam Zoo in Pattaya. Kapil was screaming his guts out on TV channels like Kung Fu Panda and Ghulam was seething as if he were Tom the cat harassed by Jerry the mouse. Yechuri was barking too, like Pidi often does.

What’s wrong with these people? Are they serious? I don’t understand one bit. When the BJP removed 377, these same people said or did nothing. Is 370 larger than 377? Obviously not. Even an idiot dolt like Kejriwal knows that. That’s why he supported the removal of 370. Then why is this hullabaloo in our party?”