Regional newspapers have been more enthusiastic about explaining the Pegasus spyware to their readers with the help of infographics, unlike some national and business dailies which preferred to put the story on the back pages. 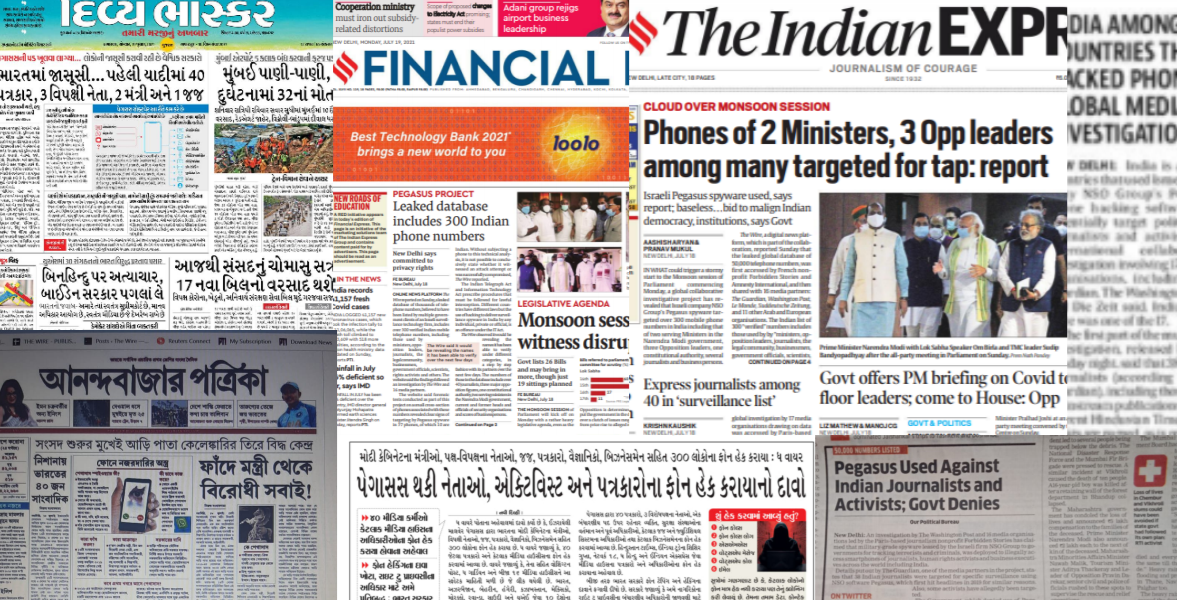 Media coverage of the Pegasus Project.

New Delhi: An investigative news report by The Wire and other international publications revealed on Sunday that thousands of telephone numbers, including 200 Indian mobile numbers of ministers, opposition leaders, businessmen, journalists and others, were on a list of potential targets for clients of an Israeli surveillance technology firm. Forensic tests were also conducted on a small cross-section of phones as part of this project which revealed that Pegasus spyware was used in 37 phones, of which 10 are Indian.

According to the reports, published at 9:30 pm IST, the Israeli company NSO Group, which sells Pegasus worldwide, said it only sold the spyware to “vetted governments”.

The leaked database was accessed by Paris-based media nonprofit Forbidden Stories and Amnesty International and shared with The Wire, Le Monde, The Guardian, Washington Post Die Zeit, Suddeutsche Zeitung and 10 other Mexican, Arab and European news organisations as part of a collaborative investigation called the ‘Pegasus Project’.

The Prime Ministers’ Office was sent a detailed questionnaire earlier this week by the Pegasus project partners, to which the Ministry of Electronics and Information Technology responded as saying: “The allegations regarding government surveillance on specific people has no concrete basis or truth associated with it whatsoever.”

On Monday morning, how traditional media, including Indian newspapers and news channels, covered the Pegasus Project story indicates the stance each media organisation takes when it comes to potential violations of citizens’ fundamental right to privacy. Regional newspapers have been more enthusiastic about explaining the Pegasus software to their readers with the help of infographics, unlike some national and business dailies which preferred to put the story on the back pages.

Most English newspapers, including Hindustan Times and Mint covered the news report as a single column on their front pages. The Economic Times – India’s largest business daily – published the report on page 3. The Times of India, The Financial Express and Indian Express carried the story as the lead on their front flap/pages. The Telegraph carried it as lead on page 2, headlined “Judge and ministers on ‘hack wish list'”. Business Standard has not carried the report, but they have published a PTI copy on their website. The Hindu decided not to give it space on the front page, and carried the story on page 8 in a double column.

Most of the news stories didn’t have any infographics. When covering Prime Minister Narendra Modi’s announcements or other government-related reports, they usually do use graphics and other visual aids.

Interestingly, many regional newspapers gave more importance to the Pegasus Project than national and business dailies.

Two of the most widely read Telugu dailies, Eenadu and Andhra Jyothy, gave substantial space to the explosive allegations. While Eenadu had a page 1 story detailing the people who were targeted by Pegasus, Andhra Jyothy had a second page report.

Bangla newspaper Anandabazar Patrika carried the story as the lead on its front page, headlined “Surveillance weapon on the phone”, with an infographic explaining how the software works. Divya Bhaskar, the most widely circulated Gujarati newspaper, along with Sandesh and Gujarat Samachar, also published the report on their front pages.

Loksatta, a widely circulated Marathi newspaper, also carried the story on its front page, with a small infographic explaining what is Pegasus.

Among Hindi newspapers, only Dainik Bhaskar carried the full news report on its front page, with the headline “Spying in India…40 journalists, 3 opposition leaders, 2 ministers, one judge in the first list”, along with an infographic on how the Pegasus software works.

A Facebook post shared by senior journalist Ravish Kumar has expressed dismay over the placement of the news report in Amar Ujala, another leading Hindi daily, that has carried the story in a single column on page 11. The story has been placed along with three other stories, headlined “Pegasus had spied on more than 300 numbers, including 40 Indian journalists.”

The story was available to all media publications at the same time, since it was published at 9:30 pm. However, how each media organisation has placed and presented the report is indicative of the importance given to such a story.

Other Hindi newspapers like Dainik Jagran, Jansatta, Punjab Kesari and Navoday, have not given any space to the news report on their front pages.

Except NDTV, no other English news channel has carried the full report. Other channels including Times Now and Zee News have only carried the government or the NSO Group’s versions.