The actor Paresh Rawal and his supporters in the BJP and on social media say he was reacting to Arundhati Roy's recent comments on Kashmir. But she never even made them in the first place.

The actor Paresh Rawal and his supporters in the BJP and on social media say he was reacting to Arundhati Roy’s recent comments on Kashmir. But she never even made them in the first place.

New Delhi: Fake news about a non-existent interview Arundhati Roy supposedly gave during a recent trip to Srinagar that never happened is responsible for BJP MP and actor Paresh Rawal’s outrageous tweet against the author, which ignited a Twitter war between his supporters and those who denounced him for advocating violence.

In his tweet, the actor and BJP MP said, “Instead of tying stone pelter on the army jeep tie Arundhati Roy!” –  a thinly veiled reference to the April 9 incident where a Kashmiri civilian was tied to an army jeep and used as a human shield. Rawal’s tweet prompted many others on Twitter to endorse his call for Roy to be abducted and held hostage, with some adding their own threats and suggestions – that the writer be physically assaulted, burnt and shot.

In a live debate on CNN-IBN on Monday night, the anchor Bhupendra Chaubey said Rawal’s tweet had been provoked by an interview Roy gave and flashed the Facebook page that Rawal had tweeted when he began what would be a series of rants against Roy.

“It’s crap,” Roy told The Wire. “Have not been to Srinagar recently. Have not made any statements about Kashmir except what I wrote in Outlook last year.”

https://t.co/a6C2hWdpPz is such a toxic …Her birth certificate must be a regret letter from maternity ward !

The ‘source’ of this Facebook post was a right-wing fake news site, postcard.news, which ran a story with the same headline on May 17. The story was bylined  ‘Aishwarya S.’:

This lady who calls herself a journalist and Human Rights Activist has been standing for terrorists since decades. Recently she has given an interview to Pakistan newspaper The Times of Islamabad, blasting the government of India for taking action against terrorists.

She said “India cannot achieve its objective in the occupied valley even if its army deployment raises from 7 lakh to 70 lakh, further adding that Kashmiris have remained committed with their anti-India sentiments from many years.” 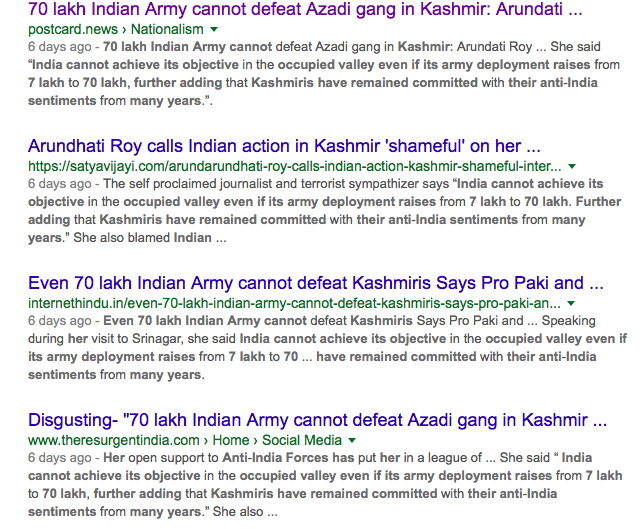 The Times of Islamabad, which is a nationalist Pakistani site and not a newspaper, ran a story on May 16 with a Srinagar dateline, ‘Even 70 lakh Indian Army cannot defeat Kashmiris: Arundhati Rai’. The source of the story is simply ‘News Desk’, which asserts that Roy had made these remarks during a recent visit to Srinagar:

Speaking during her visit to Srinagar, she said India cannot achieve its objective in the occupied valley even if its army deployment raises from 7 lakh to 70 lakh, further adding that Kashmiris have remained committed with their anti-India sentiments from many years. Taking a jibe at the Indian government she said that pity on the government which stops its authors from expressing their thoughts and put in jail those who raise their voice against injustices, however, sets free corrupt, rapists and other criminals.

Radio Pakistan ran a story, also on May 16, with the headline, ‘Arundhati Roy terms Indian aggression in Occupied Kashmir as shameful.’ Neither Radio Pakistan nor Times of Islamabad identified a source for Roy’s comments but a similar news story on the Pakistan-based Geo TV site attributed her quotes to ‘Kashmir Media Service’. According to Kashmiri journalists, the Kashmir Media Service is not a media organisation but the propaganda arm of a Kashmiri militant organisation in Pakistan-occupied Kashmir. It maintains a website but the news about an Arundhati Roy interview is not archived there.

Subsequently, Pakistan’s ARY channel also quoted Roy, and this became the source for an angry article by Mayank Singh on a US site called Fair Observer, in which he attacked the writer for her comments. This article was subsequently republished by NewsLaundry. In the CNN-IBN debate, BJP spokesperson Sudhanshu Mittal used the Fair Observer article as a source for the comments attributed to Arundhati Roy, with the anchor, Bhupendra Chaubey, saying he was right in doing so. Mittal held up a print-out when challenged by another panel member about the veracity of Roy’s alleged comments, and asked, “Is this wrong? This article on Fair Observer, is this wrong which quotes her?”. Chaubey replied: “That article is right.”

The only problem with all of this frenzied reporting on both sides of the border is that Arundhati Roy had not visited Srinagar recently and had given no interview there or anywhere else where the words attributed to her were said.

The news, in other words, was completely fake.

Roy has long been a critic of the Indian government’s policies in Jammu and Kashmir.  In 2010, her comment that  Kashmir was not “an integral part of India” led the government to consider charging her with sedition before saner counsel prevailed. In her article in Outlook last year after the Burhan Wani upheaval, she urged an end to violence in the state and called for dialogue for peace.

The fact that Arundhati Roy gave no interview on Kashmir and did not even visit Srinagar any time in the recent past makes the controversy around the remarks attributed to her a textbook case of the relationship between the creation and circulation of fake news and the underlying political agenda of those involved. 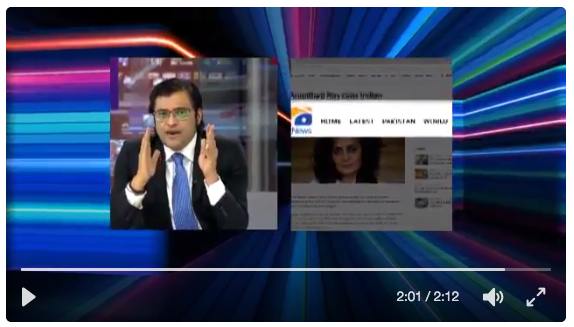 One of the purveyors of this fake news was Arnab Goswami, nightly anchor of NDA politician and MP Rajeev Chandrasekhar’s new channel, Republic TV, who attacked Roy as a ‘one-book whiner wonder’ who had “visited Kashmir in the second week of May”:

“they called the Indian Army names, they all came together, especially the Lutyens media, and the fake pseudo-liberal crowd, they came together to abuse our army, and then in rhythm and almost in a pre-planned way, one-book whiner wonders like Arundhati Roy came crawling out of the woodwork to once again attack the Indian Army.”

What makes this instance especially interesting is how the same fake news item was used to serve diverse political aims – ‘jihadi’ and Hindutva. In Pakistan, the fabricated interview was used to attack the Indian government’s Kashmir policies, while for the pro-Hindutva fake news sites in India, the concocted comments were used to whip up nationalist sentiment against anybody critical of the way the Modi government has handled the Kashmir situation.

The nation needs to know what to read and believe. But that won’t happen until the media realise it needs to verify the news before whipping up hysteria around it.

Update: Both Fair Observer and NewsLaundry have since withdrawn the article by Mayank Singh and apologised to their readers.