Outlook's Owner was Raided During Vajpayee's Time, but the Media Response was Quite Different

It is heartening to see that the media is standing up this time, sixteen years ago, most journalists and owners kept quiet 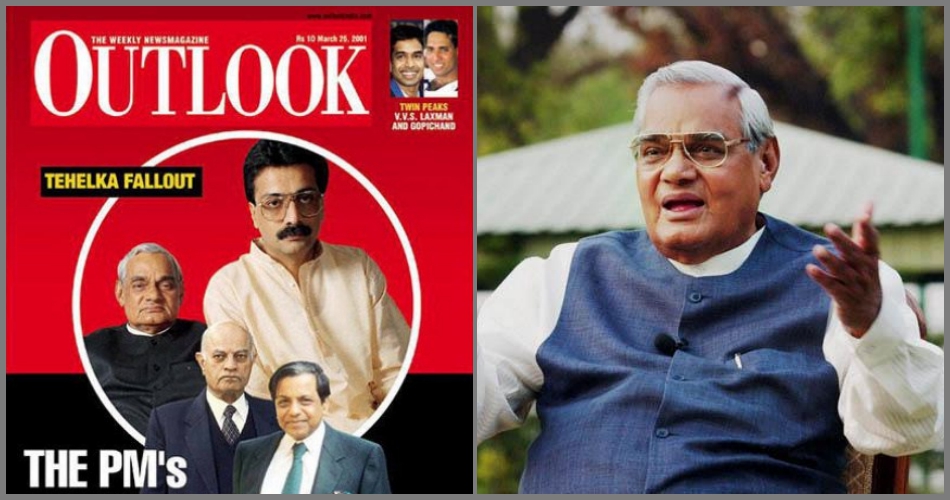 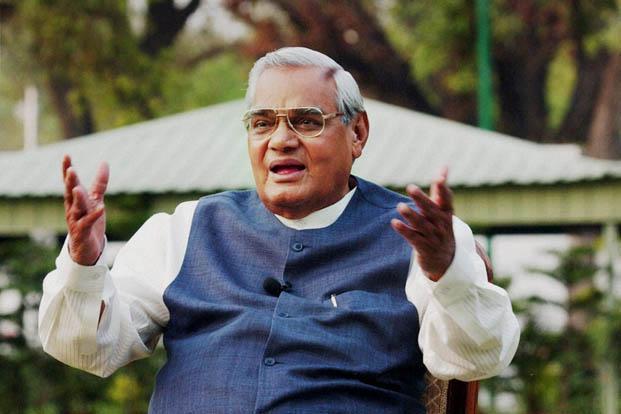 File picture of Atal Bihari Vajpayee, who was prime minister in 2001. Credit: PTI

The CBI raids on June 5 at the residence and offices of NDTV co-founders Prannoy Roy and his wife Radhika took me back 16 years to May 29, 2001. That was the day the Income Tax department raided Outlook magazine’s proprietor, Rajan Raheja. The media then reported the operation as “one of the largest in recent times” which involved 700 officials conducting search and seize operations in 12 cities across India.

The raids began on a Tuesday at 8.30 am. I was on holiday in Kerala and was shaken up by a call from Vinod Mehta, my editor. “Things are not looking good. Rajan has been raided,” he said. I had been alerted because Vinod’s feedback was that two cover stories with my lead byline had upset then Prime Minister Atal Bihari Vajpayee no end. This, he said, had prompted the government to unleash the IT department on Outlook’s owner.

The stories that caused such intense discomfort to prompt a severe reaction from the establishment were ‘Rigging the PMO’, which appeared in the March 5, 2001 issue of the magazine, and ‘The PM’s Achilles Heel’ (March 26, 2001). Both looked at how the Prime Minister’s Office of the day was being manipulated by a clutch of powerful business houses to influence key economic decisions. The second report was a follow-up with the primary focus on the clout enjoyed by Vajpayee’s foster son-in-law, Ranjan Bhattacharya, in the PMO.

It took a full two months for the IT raids to happen. But events that preceded it left no doubt that the tax department’s action was to send a message to Outlook. After the first story appeared, Vajpayee had summoned Vinod for tea. It was a meeting at which the PM had cryptically remarked that one of the bureaucrats named in our story (N.K. Singh) “could perhaps be shown the door” but we had got it wrong on the two others—principal secretary and national security advisor, Brajesh Mishra and Ranjan Bhattacharya. They, Vajpayee insisted, were clean.

Vinod misread the PM’s remark and interpreted it as virtual confirmation from the big man himself that the PMO was indeed being manipulated. Why else did Vajpayee not defend the entire trio we had named in the story? Obviously Vinod had failed to read the subtext of the conversation which was: let’s not have any more stories on Mishra and Bhattacharya or on the PMO.

So, I and Murali Krishnan – we co-wrote both stories – were given the go ahead for the follow up report but were told to double check facts and be careful. 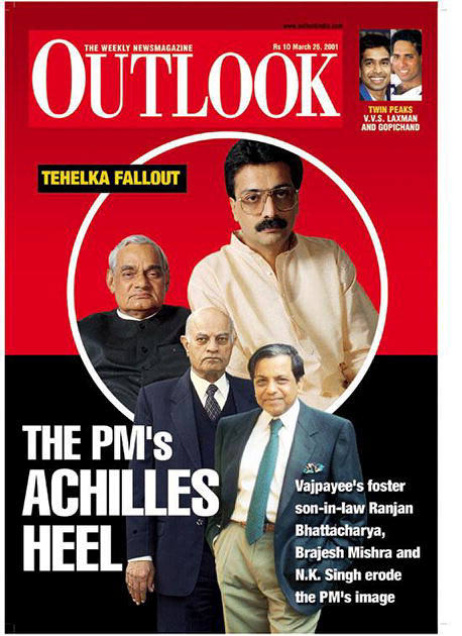 The cover of Outlook magazine that reportedly angered the Vajpayee government

Interestingly, before ‘The PM’s Achilles Heel’ hit the stands, the editor ran into Vajpayee at a Rashtrapati Bhawan banquet. The PM walked up to him and said he had something important to convey and that someone would call him. This surprise encounter was mentioned at the one-on-one meeting that Vinod ritually had with me each morning. “Are the IB chaps tapping our phones or is someone leaking information from this office?” he wondered, convinced that the “someone” referred to would call to stop or stall the story.

Vinod did receive several calls from Brajesh Mishra’s office but he religiously avoided them – the latter’s secretary was told that the editor had gone on holiday without leaving a contact number. Meanwhile, the story was processed, put on page and cleared.

When the magazine hit the stands, it forced the government to respond. Brajesh Mishra and NK Singh held a joint presser at Shastri Bhawan in which all the charges levelled against the PMO were rubbished. But curiously Outlook was not named. The strategy obviously was to strike much later when the charge of attacking press freedom could be effectively countered.

At Outlook, we naively presumed the story was done and dusted. It may not have created a storm or led to a shake up in the PMO, but had for a brief while become a talking point in the government, among Vajpayee’s detractors within the BJP and the larger Sangh Parivar. So, the raids— two months after the stories appeared–came as a complete surprise.

If we at the Outlook expected the media to stand together and protest the raids as an affront on press freedom, we were sadly mistaken. Of course, there was an outcry of sorts. The Editors Guild and the Delhi Union of Journalists condemned the incident. Friends like Kuldip Nayyar and Khushwant Singh spoke out for us in their columns. But for the most part, the mainstream media remained non-committal and merely reported the raids as a matter of routine with no editorial voicing condemnation.

Instead, there was some amount of misreporting as when sections of the press carried stories quoting “IT sources” that Rs 51 lakh had been seized from the Raheja residence during the raids. Vinod had to issue a press release that the correct recovery was Rs 51,000—legitimate money that was kept apart for medical emergencies. Years later Rajan Raheja revealed at an editorial conference that this money was returned after the case was closed since no incriminating evidence was ever found.

In the aftermath of the raids, Vinod asked me to meet journalists to seek support. But the response I got from senior colleagues was mixed –some sympathised but said they were helpless. Others were downright critical. Their take ran something like this: The raids on Rajan Raheja cannot be seen as a freedom of press issue; if that were the case then every business house owning a publication could claim immunity from the law; Outlook had in no way been harmed since it was still coming out and no staff member had been arrested—so where was the question of attacking press freedom?

Perhaps the unkindest words in the Outlook case came from certain quarters which felt that when a magazine runs anti-government stories there is bound to be “collateral damage.” I recall one senior editor of a leading daily telling me that “actions always prompt reactions” and that one has to tread carefully. “If you drive recklessly you may come to harm. If Vinod Mehta and his team think that they are fighting a war then they should know that in a war there will be casualties.”

So, what impact did the raids have on the magazine? On the day that the IT investigators came calling, Vinod offered to quit. But Rajan Raheja asked him to stay on and not give in. The owner, Vinod told me, seemed unfazed by the government action. However, very soon the Enforcement Directorate joined the investigation and the harassment began.

Rajan Raheja would be summoned to a musty office of the ED in Mumbai for questioning every morning and released late evening. This went on for several days. Documents and papers dating back 15-20 years would be demanded by the investigators and files scrutinised endlessly. All this began to tell on the owner’s larger business interests, of which Outlook was but a minuscule part. The government’s “if you can’t shoot the messenger, then shoot the messenger’s financier” strategy seemed to be working.

A month after the raids the effects began to slowly show on the magazine. I was asked by Vinod to go easy on stories, particularly against the PMO. It was a temporary phase, he assured me, till the heat wears off. Meanwhile, there was a marked change in Outlook’s approach to stories. Caution was exercised on any investigative reportage about the government. Documents were demanded of reporters before carrying a report. In short, we were afraid to stick our necks out. Temporary paralysis set in which took time to reverse.

Vinod expressed his general anguish in an editorial he wrote at that time in the magazine. To quote…“while privately we were patted, while phones kept buzzing with only-you-could-have-done-it messages, while hands were pumped in praise, the silence (in terms of reaction or response) is loud, clear and deafening… those who stick their neck out –they are fast becoming an endangered species–might as well shut shop and go home.”

I am often asked if Outlook had over-reacted and should have resisted? My answer remains the same till today–perhaps we may have fought against the establishment if the mainstream media had backed us. If we were at least given to understand that Outlook was not alone in its fight. But 16 years ago, we felt we were shouting from the margins.

It is in this context that I was heartened by the impressive show of support for NDTV at the protest meet last Friday at the Press Club in Delhi. A united press standing steadfast is what we need to resist government intimidation. Today it is NDTV. Tomorrow it could be any one of us…

The writer was a senior editor with Outlook magazine and is author of Off the Record: Untold Stories from a Reporter’s Diary