The front pages of The Mumbai Mirror and The Telegraph.

On Wednesday, the special court judge said that the demolition was not pre-planned and that the accused were “trying to stop the mob and not incite them”. He added that there was not enough evidence against the accused and that the court could not probe the authenticity of the audio and video evidence provided by the CBI.

This is what we are: The Telegraph

The Telegraph in Kolkata, long since the paper with the eyeball-grabbing headlines, led with a half-page image of a donkey with the legend, “If we’re indeed shocked, this is what we are.”

The front page report, a full page of coverage on the verdict and the commentary on the editorial pages all constituted strong criticism of the judgment. 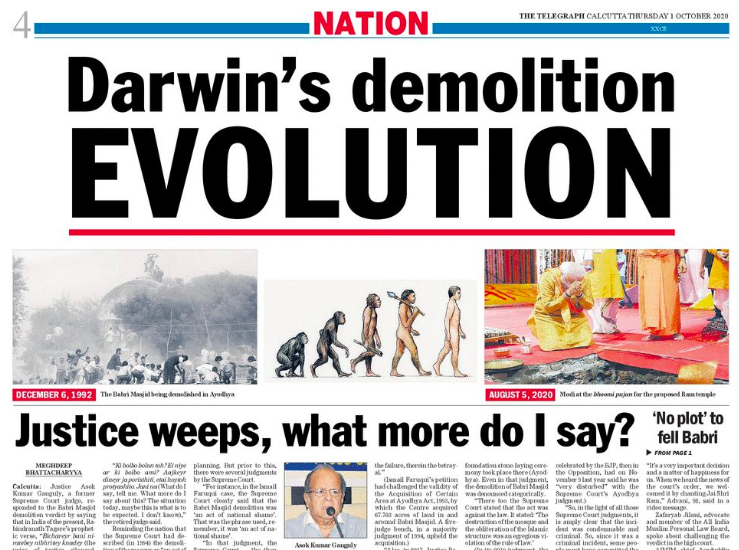 An inside page of The Telegraph.

The Times of India, the largest English newspaper in circulation in India, in an editorial published on Thursday held that the failure to uncover the “serious violation” of 1992 was “a black day for Indian democracy”.

Adding that the country’s track record of prosecuting communal riots was “abysmal” and that riot leaders were “rarely” brought to justice, the editorial maintained that the CBI’s prosecution in the demolition case “fell flat” and that the probe agency must “examine its failure to prove documentary evidence”.

Making note of the prolonged duration it took for “the wheels of justice to turn” in India, it added that the apex court must review the “unacceptably long procedural delays that plague important cases”. “Such a lengthy course doesn’t bode well for the rule of law,” the editorial said.

Mumbai Mirror, another paper whose headlines frequently make for social media shares, attempted to cite the twin examples of the hurried Hathras cremation and the demolition as a mark of the deterioration of India’s democracy.

An unconscionable judgment: The Hindu

In a strongly worded editorial, The Hindu noted that the trial court had dismissed the Supreme Court’s observation that the demolition was an “egregious violation of the rule of law” and had in effect “given judicial legitimation to the ‘Ram Janmabhoomi movement’” by acquitting the accused.

“Its conclusions are drastic and defy logic and fact,” the editorial pointedly said of the court’s verdict and held that its finding that the demolition was not pre-planned “flies in the face of the entry of more than a hundred thousand volunteers into Ayodhya that day, armed with crowbars, spades, hoes and ropes”. The movement’s leaders “had positioned themselves in vantage points” to celebrate the occasion, it further said.

Also read: Only the Wilfully Blind Will Believe There Was No Conspiracy Behind Babri Masjid Demolition

The editorial also held that the court had “sufficient evidence that there was studied inaction on the part of the State” and “the unambiguous and open threats to the structure voiced by many of the movement’s protagonists”. Noting that while it was not easy to prove a conspiracy, the courts “must draw reasonable inferences from the circumstances”.

That the CBI had failed to prove the element of conspiracy and the details of the advance mobilisation was “no surprise”, the editorial said and faulted the police investigation, which had been “marked by bungling” from the beginning.

“Even allowing for the possibility that the judiciary is in close alignment with the executive, it is unacceptable to see a court going so far as to parrot the specious theory advanced by the demolition squad,” the editorial said on the court’s judgement calling the demolition a ‘spontaneous act’,

Finally, the editorial said that it was imperative that the CBI challenged the verdict given the grave implications that the exoneration would have on “public trust in the judicial system”.

“The cause of communal amity cannot afford successive judicial setbacks to both secular values and the rule of law,” it said.

Editorials in The Hindu (L) and The Indian Express (R).

The rule of law is at stake: The Indian Express

The Indian Express editorial said that the special court’s verdict “challenges facts and does not promise closure” as the court has held “no one accountable or punishable” at the end of a tortuous legal process. Furthermore, the editorial unequivocally held that the “CBI must appeal against the verdict so that the justice process can run its full course”.

Stressing that the “rule of law” was at stake, the editorial said that the Babri masjid demolition was a “moment of shame for a constitutional democracy”.

“Will the majority and the mob have the right of way?” the editorial said, was the key question that the investigative agencies and the judiciary had to answer in the demolition case.

“How this question is addressed — and answered — will define a democracy’s commitment to due process,” the editorial noted.

No closure in this painful chapter of India’s history: The Hindustan Times

The editorial by The Hindustan Times said that the judgment, nearly three decades late “raises more questions than it answers”.

That the verdict found that the evidence obtained by the CBI after years of investigation was “tampered” and “could not be relied on” was, according to the editorial, an “indictment of India’s creaky criminal justice system”.

The Hindustan Times also noted that the conclusions appeared to “contradict the findings of the 1992 Liberhan commission that blamed senior political leaders for the event”.

The demolition of the mosque, the editorial said was “a sombre moment” and that, in many ways, Ayodhya and India have “moved on” given the “impressive Ram temple” under construction at Ayodhya. However, it added that questions about the criminal investigation, lack of accountability and the precedent set were “worrying”.