Several vendors say their delivery agents are being stopped or threatened by the police during the lockdown. 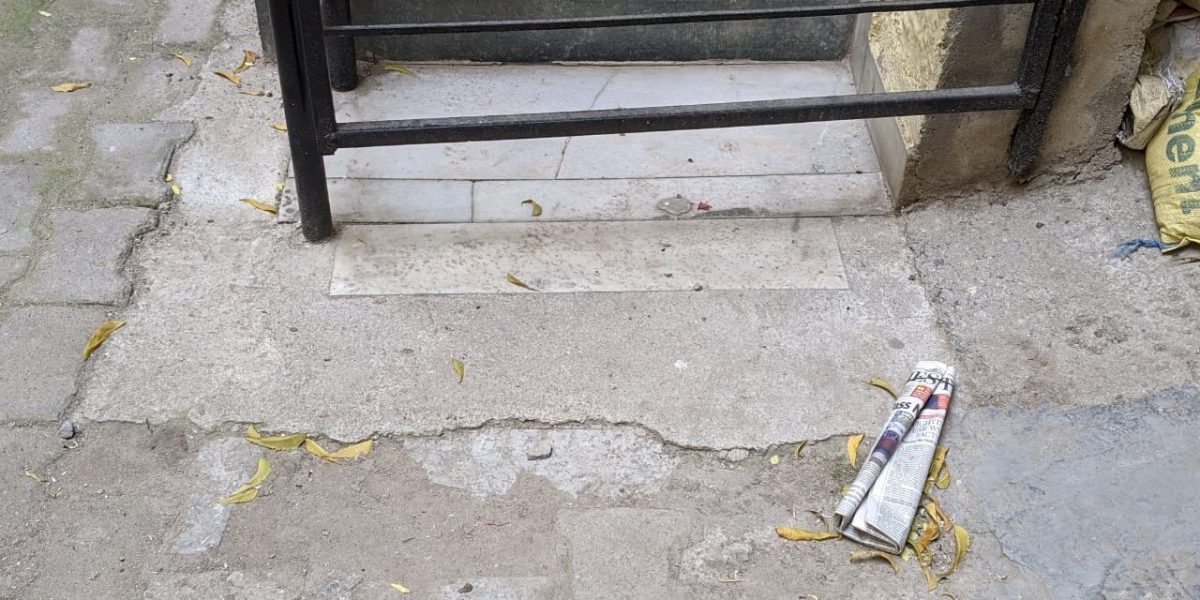 A day-old newspaper lies untouched in a south Delhi neighbourhood. Photo: The Wire

New Delhi: The fear of contracting coronavirus has hit newspaper delivery in parts of the country in two ways – while some vendors are unable to access their distributors, in other places customers have said they no longer want the paper as they are scared to touch it.

“The last time I went was on Tuesday, and I was stopped multiple times on the way by the police. They threatened me with sticks. Never in the last 40 years have I skipped a delivery day, but for the last two days I haven’t given out any papers. Customers are also unhappy; I am also unhappy. If this goes on for much longer, I’ll be looking at substantial losses. I’ve already placed orders with the distributor,” he said.

The same issue reverberates across the country. In south Chennai, newspaper vendor Shashi Kumar said he has been unable to make deliveries in any of the 10 neighbourhoods he covers since Tuesday. Police stopped him and other delivery agents at the Adyar Depot, saying that they could not go further. “We are willing to deliver, but even now around 30% of our clients are saying they don’t want newspapers out of fears that it may spread the coronavirus,” Kumar told The Wire.

The print media is listed as an “essential service” allowed to function during the nationwide lockdown announced by Prime Minister Narendra Modi. In an interview to the Indian Express, Delhi police commissioner S.N. Shrivastava said since newspaper vendors do not have media ID cards, constables are not able to identify “genuine” ones. “As regards vendors, there is no ID card. How will my constable identify who is a genuine vendor? We have asked all media houses that they should obtain passes for them,” he said.

The ID card system is proving to be a problem for some vendors. Sunil Sharma, who organises the distribution of newspapers in Sarvodaya Enclave and other localities near the Indian Institute of Technology, Delhi said his stock of newspapers is being delivered as normal but distribution is a problem because “we need to first put in place a system of ID cards for the delivery boys”. In some places the police has stopped them from moving, he said, adding that from April 1, he would resume home delivery.

In Mumbai, no newspaper has printed its city edition since March 23, as the vendors’ association said it will not be making any deliveries due to the coronavirus restrictions. They are all producing e-papers, however.

In the National Capital Region, too, some vendors have suspended newspaper delivery till March 31.

Vishal Mishra, one such vendor, told The Wire, “We have been told by our vendors’ association to not distribute newspapers till March 31 as many people are not picking newspapers from their doorstep fearing it may have the coronavirus. I distribute in the Indirapuram area of NCR. Our association covers Indirapuram, Vaishali and Vasundhara areas. So you can say residents of these areas are not getting the papers.”

According to Mishra, vendors are afraid that a large share of their monthly income will be cut. “We are very worried at the moment because people will most likely not pay us the full money if they are not receiving papers for the entire month. The other issue is, since we are not picking the papers from the newspaper offices, they may also not pay us our share. We have to pay them in advance in order to pick up the papers, from which they give us a share.”

Even many who want their newspapers cannot get their hands on a copy. Mishra, a newspaper vendor in the Lodhi Road area of central Delhi told The Wire that he is prepared to deliver and most customers still want their newspaper “but no copies are being brought to the distribution centre”. Speaking of the Laxmibai Market distribution centre near INA, he said, “We went early morning yesterday and then again today but no newspapers were dropped off.”

“Do chaar log hain jo akhbaar lena nahin chahte (There are a handful of customers who don’t want their paper delivered anymore) but most of our customers are okay with it,” Mishra continued.

A journalist at the Hindustan Times told The Wire that while circulation has taken a hit because of the lockdown, the organisation is still printing the same number of copies for its Delhi edition. The Wire has also reached out to other newspapers on whether they plan to reduce printing, and the article will be updated if a response is received.

How legitimate is the fear that your newspaper could be carrying the new coronavirus? As Dr Deepak Natarajan has explained on The Wire Science, while the virus can last hours on different types of surfaces, proximity to patients with COVID-19 is the bigger risk factor. Cardboard and plastic, sometimes used as packaging material for newspapers, can be carriers as well if the virus has been exhaled onto them by an infected person.