The doctored image attempting to resemble the front page of the New York Times was shared widely on various social media outlets around the time Prime Minister Modi was visiting the United States. 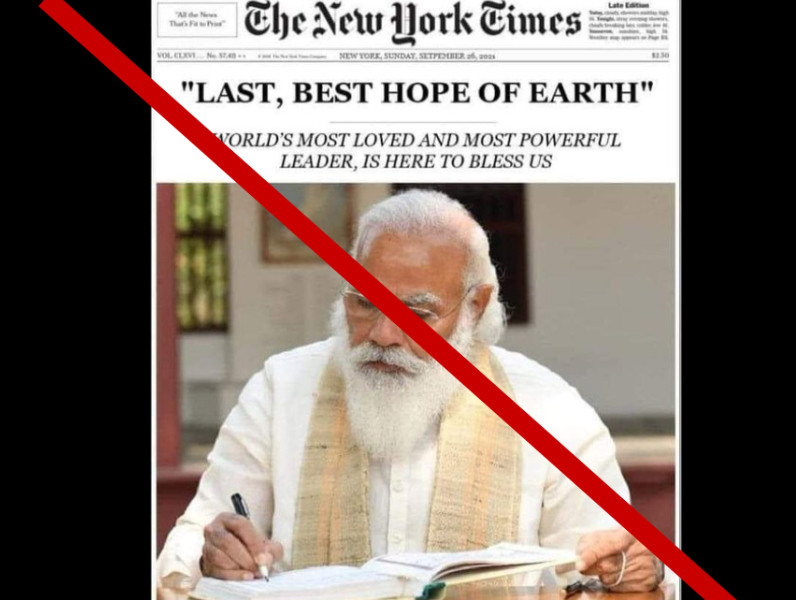 New Delhi: The New York Times on Wednesday, September 29, clarified that the image of Prime Minister Narendra Modi which was being shared widely on social media under the newspaper’s masthead alongside the headline, ‘Last, Best Hope of Earth’, was a “completely fabricated image”.

This is a completely fabricated image, one of many in circulation featuring Prime Minister Modi. All of our factual reporting on Narendra Modi can be found at:https://t.co/ShYn4qW4nT pic.twitter.com/gsY7AlNFna

The newspaper’s public relations Twitter handle said in its post that the doctored image was “one of many in circulation featuring Prime Minister Modi” and it went on to say that, “Resharing or circulating photoshopped images only adds to misinformation and uncertainty, at a time when truthful, trusted journalism is needed most.”

The doctored image attempts to mimic the front page of the New York Times and carries a ‘strap’ under the headline which reads: “World’s Most Loved and Most Powerful Leader, Is Here To Bless Us”. However, the typeface used is not the same as the one used by the New York Times, the word ‘September’ is spelled incorrectly in the dateline and there is a typographical error in the strap.

Despite these markers, the fabricated picture was shared widely on Twitter as well as other social media platforms such as Whatsapp and Facebook around the time when Modi was visiting the United States.

It was even retweeted by Rohit Chahal, the national general secretary of the BJP’s youth wing, according to a report by the Print. Chahal has a considerable audience of 76,000 followers. He has removed the post since.