The news broadcasting body has asked the channel to take down three videos that violated its ethics code. 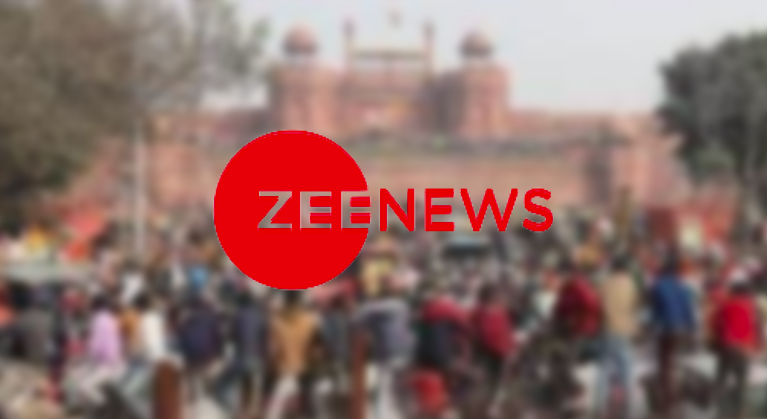 The Zee News logo. In the background is a file image of the January 26 farmers' protests. Illustration: The Wire

New Delhi: The News Broadcasting and Digital Standards Authority has found that the news channel Zee News has violated the ethics code with three videos broadcast by it, in which the channel linked farmers protesting against the three laws to Khalistanis and falsely reported that the Indian flag was removed from the Red Fort on January 26, 2021.

The NBDSA, which is a private association of TV news broadcasters, has asked for the videos to be taken down.

News Broadcasting and Digital Standards Authority (NBDSA) finds that #ZeeNews violated code of ethics in three videos by linking #FarmersProtests to Khalistanis & by falsely reporting that Indian flag was removed from Red Fort. NBDSA asks the videos to be taken down.#Farmers pic.twitter.com/TJiYbuQAHb

News of the NBDSA’s decision comes a day after news broke that the body had concluded that debates on the February 2020 Delhi riots conducted by two Times Now anchors – Rahul Shivshankar and Padmaja Joshi – were not conducted in an “impartial and objective manner”.

This order, like the Zee News order, is dated November 19, 2021, and is signed by NBDSA chairperson Justice (retired) A.K. Sikri.

The NBDSA order notes that the complaint, filed by activist Indrajeet Ghorpade, was regarding programmes aired in two shows on January 19, 20 and 26.

The programmes violated no fewer than eight guidelines, including the dictum that reports should not sensationalise or create panic, distress or undue fear, among others.

“All news channels will keeping with the principle of due accuracy and impartiality, ensure that significant mistakes made in the course of broadcast are acknowledged and corrected on air immediately,” the code of ethics of the NBDSA, which Zee News was found violating, says.

The programmes, Ghorpade’s complaint said, used unverified videos which were not connected to the farmers’ protests at all, including one of a charity event in Germany which had tractors decorated with festive lights.

The channel’s programme on Republic Day, where a section of protesters reached the Red Fort, had headlines like ‘Civil War on Republic Day’, ‘Conspiracy of a War against the Republic’, ‘Shadow of Terror in the Protest’ and ‘Farmers Adamant, Is a Bloody War Decided’?

Also read: Farmers Win on Many Fronts, Media Fails on All

Ghorpade’s complaints also alleged that the channel had misreported the removal of another flag from the Red Fort as farmers having removed the tricolour. It also purportedly attempted to draw parallels between the farmers’ protest and pro-separation Khalistani elements.

The Quint has reported that Zee News responded to the claims by denying the allegation that it had attempted to hinder the farmers’ protest. It said that the unverified videos had had “disclaimers” on the channel not being able to verify authenticity.

On the national flag insult claim, Zee News said that it was an oversight that happened during live news and the YouTube video was removed. It also, in turn, accused Ghorpade of making “it a communal issue.”

Ghorpade has responded with the claim that the channel did not make any efforts to apologise for misreporting and continue to peddle the same views on its portals online and on TV.

The vilification of the farmers’ protests on mainstream media channels had been the subject of several op-eds and analyses. On November 19, the same day on which the NBDSA order was out, the Union government announced the repeal of the three laws that the farmers were protesting against.