The statement issued by the All India Muslim Personal Law Board observed that there was no point in participating and watching debates whose sole intention is to 'defame Islam and the Muslim community.' 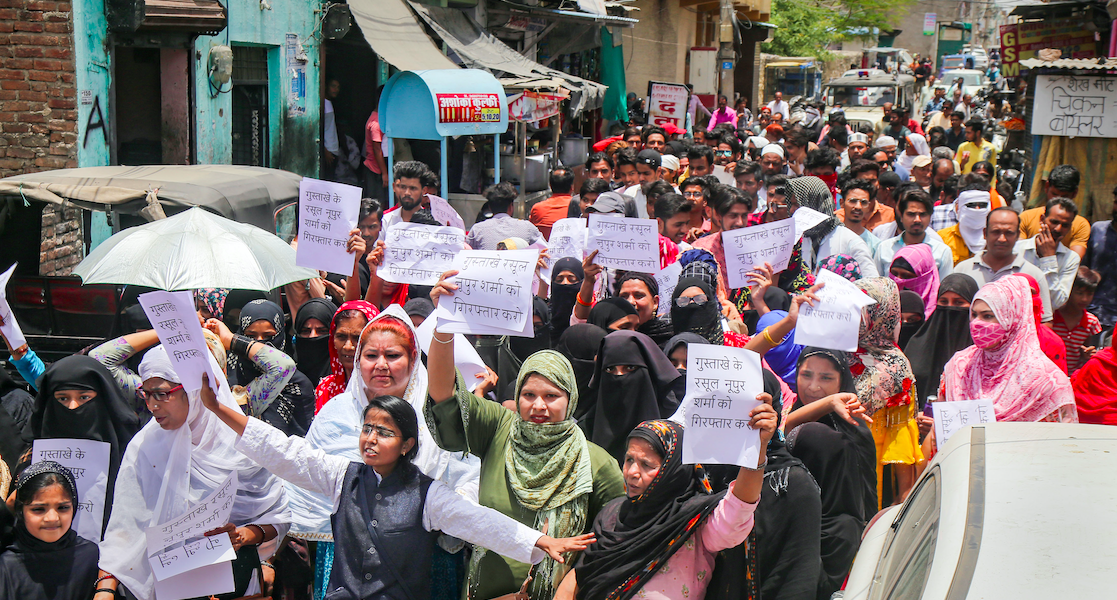 A Congress councillor leads a protest against Nupur Sharma's remarks against Prophet Muhammad at Kota on Sunday, June 5. Photo: PTI

Lucknow: Aggrieved by hyper-communal debates on television, the All India Muslim Personal Law Board (AIMPLB) has told Muslim clerics and scholars not to participate in them, and also urged Muslims at large in the country to stop watching them.

A statement to this effect, jointly issued by Board president Maulana Rabe Hasan Nadvi and general secretary Maulana Khalid Saifullah Rehmani, on Monday, June 6, said it would help stop the spread of communal hatred in society.

The statement said that the television debates for the past few years have been consistently defaming Islam as well as the Muslim community.

The Board also raised questions about the intent of such debates and said the objectives behind those debates are to create an atmosphere of hatred in the country. “TV channels design their debates not to improve the knowledge of the public but to insult Islam and its revered figures,” the statement said.

Irked by televised communal debates, members of the Board jointly appealed to the community to boycott the channels that broadcast divisive content.

According to the Board members, if the community stopped watching those “ridiculous debates,” not only would their Television Rating Point (TRP) drop massively but also would expose the “well-orchestrated conspiracy” against Islam.

This comes at a time when there is a massive outrage across the world after ruling Bhartiya Janata Party (BJP) spokesperson Nupur Sharma made an offensive remark against the Prophet of Islam, Hazrat Mohammed, during a television debate. Huge protests broke out in several parts of the country demanding her arrest. The remarks also resulted in communal tensions in the Kanpur district of Uttar Pradesh.

Amidst outrage across the Islamic world, the BJP, under pressure, suspended Sharma for six years, and also cancelled the primary membership of Naveen Kumar Jindal whose tweets also carried disparaging comments against Islam and the Prophet. However, the aggrieved Muslim community across the country has been demanding the criminal prosecution and arrest of Sharma.

In the last few years, coinciding with the rise of Hindutva politics, television debates have largely focussed on communal issues where Muslim representatives who participate in them are humiliated on air. The news anchors, with whom rests the responsibility of moderating these debates and allowing all participants to have their say, often take one-sided positions and become hostile to Muslim speakers. This is not a case of an isolated instance but a pattern largely being followed across most of the mainstream channels.

Qasim Rasool Ilyaas, an executive member of the Board, told The Wire that the Board issued the statement to counter the hate agenda of the pro-right wing media.

Ilyaas said, “The intent behind these debates is crystal clear that they want to insult our religion and pass blasphemous comments on revered personalities. These debates only negatively impact the country’s communal harmony.”

“We not only urged our clerics and intellectuals to stop participating in these debates but also exported the entire idea of stopping watching such ridiculous debates,” he added.

The All India Shia Personal Law Board (AISPLB) has also extended support to the AIMPLB’s appeal and decided not to participate in debates.

Shia Muslim cleric Maulana Syed Zaheer Abbas Rizvi said, “We should appreciate the bold step of AIMPLB to avoid participating in media debates. The TV debates, specifically primetime shows, are being used by the right-wingers to spew venom against Islam for the past few years.”

Syed Husain Afsar, an editor of an Urdu daily, said, “I never watched or participated in any TV debate that ended with a logical conclusion. Social media and TV are both encouraging communalism in the name of hijab, azaan, and the Gyanvapi mosque and diverting people from real issues of inflation, education and public health.”

However, veteran journalist Sharat Pradhan vouched for Muslims’ participation in TV debates so that their points of view are aired.

He added that avoiding debates curtails the right to freedom of expression. Pradhan said that TV anchors and journalists should not act like “bigots” during the programmes and should avoid misbehaving with participants, and should stop others if they do so.