Several highlighted the wide disparity between the police's treatment of personalities who routinely spew hate speech and the way the fact-checker has been taken to task for a 2018 tweet. 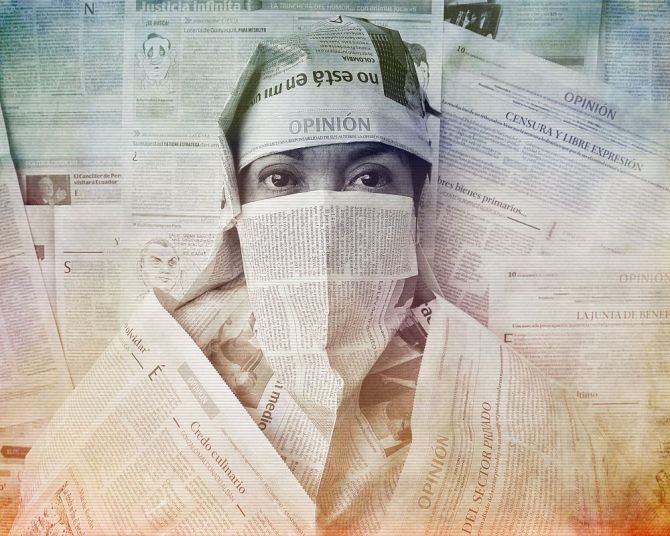 Most highlighted the role played by Zubair and Alt News in tackling disinformation in the last few years. That this made him a direct target of fake news generators was highlighted by the Editors Guild of India in their statement condemning the journalist’s arrest.

Among global bodies who called upon authorities to immediately release Zubair was the Committee to Protect Journalists.

“The arrest of journalist Mohammad Zubair marks another low for press freedom in India, where the government has created a hostile and unsafe environment for members of the press reporting on sectarian issues,” said Steven Butler, CPJ’s Asia program coordinator, in Washington, D.C.

“Authorities must immediately and unconditionally release Zubair, and allow him to pursue his journalistic work without further interference.”

Indian authorities must uphold free expression and #pressfreedom. Zubair must be immediately freed.https://t.co/a41WL9xEzk

DIGIPUB, an organisation of digital news media organisations of which The Wire is a part, has also condemned the arrest, noting that it “firmly stands with Zubair”, and urging the Delhi Police to “immediately” withdraw the case.

The Press Club of India, in addition to calling for his release, has also cited Prime Minister Narendra Modi’s promise to uphold freedom of speech at the G-7 meeting.

The fact that Zubair’s arrest came on the same day when  Modi spoke on the 1975 Emergency, called by Indira Gandhi, and vowed as part of the signatories of a G-7 pact to “improve the resilience of democratic societies” was an irony highlighted by many.

The Press Club of India demands that Muhammad Zubair be released by the Delhi Police pic.twitter.com/e9I9D1tMjd

The Prime Minister of India talks about the horrors of Emergency while he has unleashed one in India. Journalist Zubair who routinely busted fake news, exposed the hate machinery in India has just been arrested. The country is punishing those who reported, documented the decline

Prominent journalists focused on the harm such a move would deal to press freedom.

Jouranlist Mohammed Zubair is a frontline democracy defender in India.
His fact-checking was puncturing BJP’s propaganda on a daily basis.
The arrest of Zubair is an attack on truth and free press in India.
If @zoo_bear is in jail, none of us is free.

In India busting fake news and calling out hate and bigotry is now a crime. @zoo_bear’s arrest is shameful. He must be released immediately.

Hashtags calling for Zubair’s release were widely used by many who pointed out that the work undertaken by him and fact-checkers like him was essential and kept truth at the forefront. The hashtag #IStandWithZubair has by now been tweeted more than 500,000 times.

It was trending at no. 1 worldwide. Now at number 3.#IStandWithZubair pic.twitter.com/xUhgS4OrLY

In solidarity with @zoo_bear.

In times of Indian media operated through a corporate political nexus, his hard hitting work, detailed fact checking have been important tools to keep truth at the forefront of all fights.

Aakar Patel, chair of board for Amnesty International India, said that Zubair’s arrest shows that the danger facing human rights defenders in India has reached a crisis point.

“The fact that he was not provided a copy of the FIR and was detained incommunicado during the initial hours following his arrest shows just how brazen the Indian authorities have become. Harassment, intimidation, unlawful and arbitrary arrests, and imprisonment of human rigts defenders for tirelessly seeking truth and justice has become alarmingly commonplace in India,” the statement read.

Our statement on the arrest of Mohammed Zubair pic.twitter.com/R9DBtx6pHF

Congress leaders, including Rahul Gandhi, also tweeted against the arrest. Gandhi’s use of the hashtag #DaroMat led to it trending on Tuesday morning.

MP Shashi Tharoor, like Gandhi, highlighted the “assault on truth” that such an arrest signified.

Every person exposing BJP's hate, bigotry and lies is a threat to them.

Arresting one voice of truth will only give rise to a thousand more.

India’s few fact-checking services, especially @AltNews, perform a vital service in our post-truth political environment, rife with disinformation. They debunk falsehoods whoever perpetrates them. To arrest @zoo_bear is an assault on truth. He should be released immediately.

Several journalists and politicians highlighted the nature of the purported crime for which Zubair had been made to pay – exposing hate speech.

Mohammed Zubair of @AltNews has been arrested. Giving hate speech is not a crime, but exposing hate speech is. Stop targeting journalists. @zoo_bear should be released immediately.#IStandWithZubair

Zubair is being punished for exposing their lies. And lies are all they have. #IStandWithZubair

So Mohammed Zubair @zoo_bear who had raised red flag and exposed several instances of hate speech is now accused and arrested of hate speech himself. Even as many of those who he exposed roam freely. Chilling effect. 🙏 https://t.co/2xnNPwe5A1

Shocked to hear that @zoo_bear has been taken into custody by the Delhi Police. Checking fact from fiction was probably his biggest crime?

The Prime Minister of India talks about the horrors of Emergency while he has unleashed one in India. Journalist Zubair who routinely busted fake news, exposed the hate machinery in India has just been arrested. The country is punishing those who reported, documented the decline

Several also highlighted the wide disparity between the police’s treatment of personalities who routinely spew hate speech and the way Zubair has been taken to task for a 2018 tweet.

AIMIM’s Asaduddin Owaisi and Trinamool Congress’s Saket Gokhale are among those who asked why Delhi Police is usually one to give a pass to distinctly recognisable hate speech but has been active in arresting the journalist over a five-year-old tweet.

Arrest of @zoo_bear is highly condemnable. He’s been arrested with no notice & in some unknown FIR. Total violation of due process. @DelhiPolice does nothing about anti-Muslim genocidal slogans but acts swiftly against “crime” of reporting hate speech & countering misinformation

A 2020 tweet by BJP IT cell's Amit Malviya where he disclosed the identity of Hathras rape & murder victim.

Show the same urgency in arrest that you showed for @zoo_bear.

Nupur 'fringe' Sharma roams free on the fringe away from the 'reach' of the state. Mohammed Zubair who brought her hate speech to the notice of the world is at the centre of the regime's action.#FreeZubair