#MeToo: BS Reporter Resigns Over Allegations of Past Sexual Misconduct

Mayank Jain had been accused of harassment at his earlier workplace.

New Delhi: Business Standard (BS) reporter Mayank Jain, who was accused of sexual harassment, has resigned from his role as principal correspondent for the newspaper, editor Shyamal Majumdar confirmed to The Wire. His resignation has been accepted with immediate effect.

Jain, who was recently called out on Twitter by The Wire’s Anoo Bhuyan for making unwanted advances, had been asked to submit a detailed response by BS after allegations against him went viral on social media.

Soon after Bhuyan, a freelance journalist shared screenshots of her conversations with Jain in which he assumes that she would like to “take a place” with him, implying he assumed she would want to have sex with him.

Accusations of workplace harassment also surfaced. During his stint as a reporter at Scroll.in, a woman employee had informally and verbally brought to the attention of a member of the internal complaints committee (ICC) an instance of sexually inappropriate online behaviour by Jain in 2017.

The employee, however, did not want to pursue the matter through a formal written complaint, without which no formal inquiry can be initiated, the news website said. Jain worked for Scroll.in from October 15, 2014 to October 30, 2016, and then again from June 12, 2017 to December 31, 2017.

“We are deeply troubled to hear that such misbehaviour and harassment may have occurred at a work-related event in December 2016. Unfortunately, as no complaint was made, we had no way of taking any action against the person involved,” BloombergQuint said in a statement last week after a former intern accused Jain of similar actions. “Till she tweeted about it on Friday we had no knowledge that such an incident had taken place. Had we the slightest hint, even the lack of a formal complaint would not have stopped us from acting to redress the situation”, an editor with the website told The Wire.

A source at BS has informed The Wire that soon after Jain joined the newspaper, senior management was made aware of allegations of sexual misconduct against him and the company asked him to sign an undertaking. In August 2017, a former girlfriend had earlier accused Jain of forcing himself on her and gaslighting. 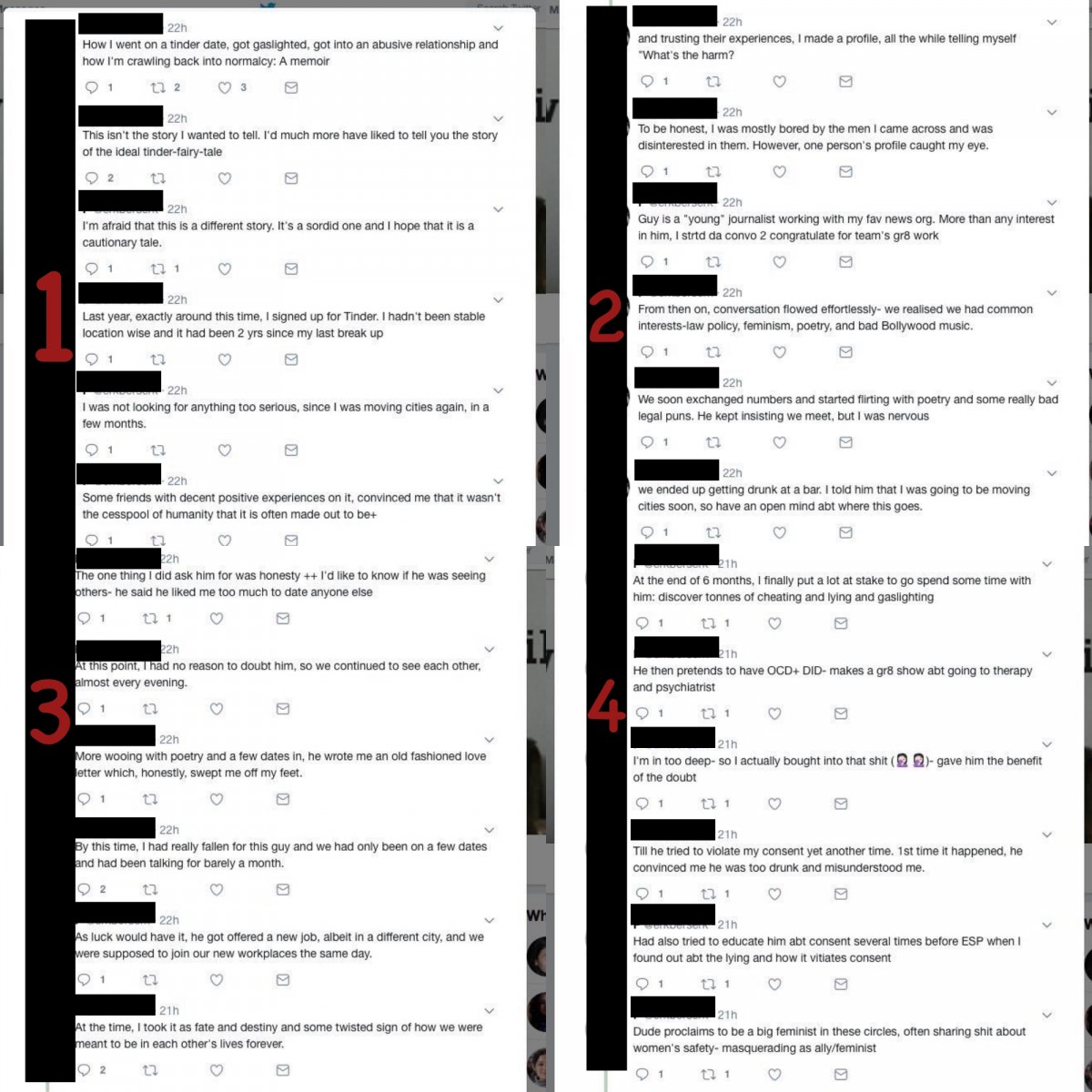 Gaslighting is the act of psychologically manipulating someone in order to make them doubt their own memories and sense of reality.

“He tried to violate my consent yet another time. First time it happened, he convinced me he was too drunk and misunderstood me,” she wrote in a thread that went viral on Twitter. Responding to her Twitter thread, Jain tweeted, “I’m sorry. I did everything. I shouldn’t have done this to you or anyone but I did and I apologise. I’m taking therapy to reform my self.”

Jain isn’t the first head to roll as the Indian media grapples with its Me Too movement. Following allegations of sexual harassment, Prashant Jha stepped down as the political editor and bureau chief of the Hindustan Times (HT) on Monday. Meanwhile, Times of India‘s Hyderabad resident editor has been sent on ‘administrative leave’ following allegations of sexual misconduct by multiple women.

Former executive editor at TOI and former editor-in-chief of DNA, Gautam Adhikari resigned from his post as senior fellow at the Center for American Progress in Washington DC following allegations of sexual harassment against him. Several accounts of the former newspaper editor-turned BJP minister, MJ Akbar, violating consent and conducting uncomfortable interviews with female journalists in hotel rooms have come to light.