Two journalists associations have said "this crisis must be accepted by media companies and their shareholders, not passed on to vulnerable employees.” 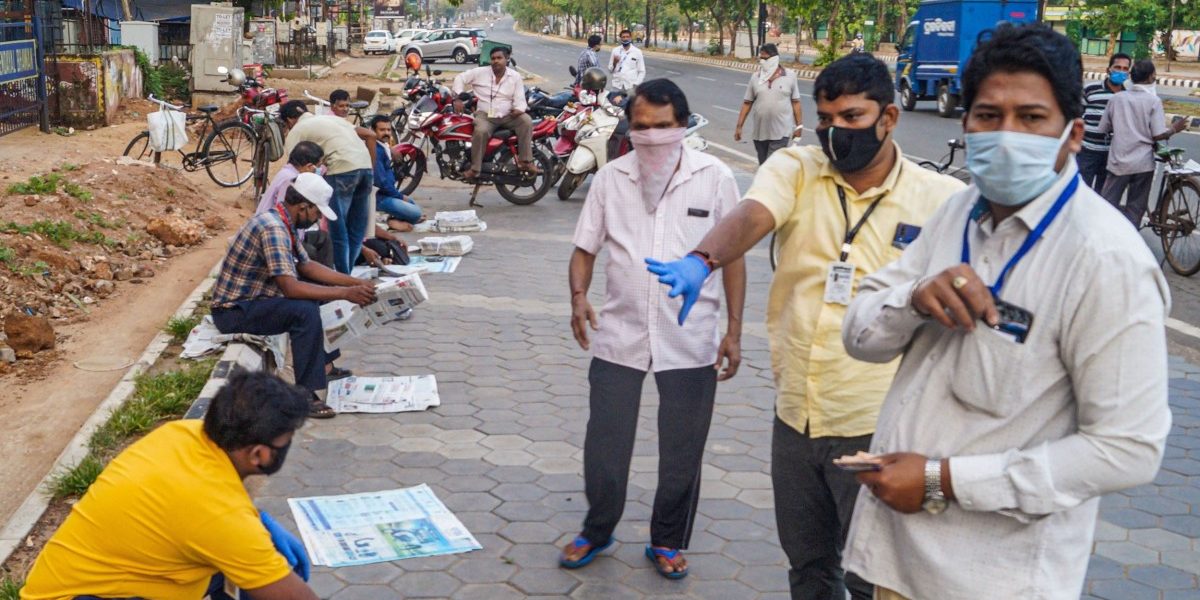 Newspapers being sold in Bhubaneswar during the lockdown. Photo: PTI

New Delhi: In view of the large number of lay offs and salary cuts announced by several media organisations, the National Alliance of Journalists (NAJ) and Delhi Union of Journalists (DUJ) have accused media owners of using the nationwide lockdown announced to combat the spread of COVID-19 as “an excuse for retrenchment and arbitrary pay cuts”.

In a statement, they said the novel coronavirus was “a national crisis and the pain of dealing with this crisis must be accepted by media companies and their shareholders, not passed on to vulnerable employees.”

Stating that “media owners are claiming that they are severely affected by the lockdown, that circulations and advertising have fallen and therefore they are resorting to these measures,” the groups expressed shock at “reports pouring in of sackings and pay cuts in the media at this critical time.”

They added that “in 2016 the media industry misused the demonetisation decision to enforce mass retrenchments”, and “today some media companies are threatening to turn the lockdown into a lockout.”

‘Reprehensible that Times of India Group should be firing employees’

“It is reprehensible that the richest media company, the Times of India group, should resort to firing employees although it can well afford to keep them on the payroll.  Employee costs are a small percentage of the huge profits the company makes. Those sacked now include people who have dutifully worked for them for over two decades, contributing to the growth and wealth of the company.”

Also read: This Gurugram Community Radio Station Is Playing a Key Role in Times of COVID-19

This statement was in reference to the newspaper group closing down its Sunday magazine section. One of its senior journalists, Nona Walia, had written in her Facebook post about the lay-offs:

“The entire team of Sunday magazine of Times of India asked to leave. Got a call from my boss Poonam Singh. Sacked after 24 years from a company I served with love for more than two decades. Wow.”

The NAJ-DUJ office bearers also referred to cutting of pay by the Indian Express group. A few days ago a note sent by CEO George Verghese to the employees got widely circulated. It read: “Our advertising revenues have been hit hard and all available evidence shows the worst may be yet to come.” Further it declared that the staff would have to undergo a graded pay cuts ranging between 10% and 30%, with some senior management and editors taking a 100% salary cut.

Referring to this development, the NAJ-DUJ office bearers said: “The Indian Express group has enforced pay cuts ranging from ten to thirty percent. Reports are also coming in from the states of the closure of print editions of several dailies.”

The association representatives said “if the newspaper industry is ‘losing money every day’, as the Indian Newspaper Society has written to the Union Government, it should reconsider its policy of deliberately depressing newspaper prices and depending wholly on advertisement revenues. It now wants a government handout in the form of removal of 5% customs duty on newsprint, a two-year tax holiday, a 50% increase in DAVP advertisement rates and a 100% increase in budget spend for print media. But what largesse is it giving the employees?”

The Quint makes employees go on leave without pay

A note sent by the organisation to its employees had stated: “We are forced to request you to proceed on a ‘furlough’ (ie, leave without pay, LWP) wef the 15th of April, until further notice. Your pay for the half-month, from April 1 through 15, shall be processed and released very soon.”

Also read: Backstory: Media Please Note, COVID-19 Has Brought out the Best and Worst in Us

Pain in electronic media too

The NAJ-DUJ representatives also raised the issue of problems faced by the electronic media. “We wish to point out that hundreds of journalists across the country are currently risking their lives and persons to report news about the spread of the virus and the impact of the lockdown. Some employees at the Times TV studio in Mumbai have reportedly contracted the virus and their colleagues have been shifted to a different location to carry on their work. Journalists today are frontline warriors and deserve support in doing their jobs. Instead, sudden pay cuts and sackings are destroying the morale of media persons today.”

Incidentally, several news channels have also laid off their staff members in the recent past. One of these was News Nation Network which, according to those impacted by the decision, laid off its full English digital team of 15 without any termination notice or an opportunity to serve the notice period.

A former employee, Shashikant Sharma had posted on Linkedin about the crisis:

“Guys, in a very unfortunate decision, News Nation has sacked entire English digital team yesterday. Many of my colleagues were left with no job in the middle of this crisis. The team includes hardworking journalists and social media executives. They are looking for jobs. Fortunately I quit the place a month before. But they need out help now. If anyone can help them in their hour of need, will be appreciated. PS: News Nation sucks. Let’s boycott them. Raghwendra Shukla.”

Web portal Newslaundary cited one of the employees as saying that he got a call from the editorial director Manoj Gairola who said: “The company is going through a financial crisis due to the pandemic so we have to do this.”

Meanwhile, the journalists’ associations have also said that these decisions by the media organisations have been taken despite Prime Minister Narendra Modi in several of his recent addresses to the nation appealing to employers to show empathy and not deduct salaries of or sack their employees during the lockdown.

“The NAJ and DUJ expresses solidarity with those impacted by the arbitrary moves of media moguls. We demand that media companies immediately restore the jobs and salaries of all employees,” the statement by the NAJ-DUJ office bearers said.

The Brihanmumbai Union of Journalists (BUJ) is shocked at the spate of job losses in the media industry in the wake of the unprecedented nation-wide lockdown due to the Covid-19 pandemic. The mass retrenchments are patently illegal, grossly unethical and unbelievably inhuman, coming as they do at a time when all citizens are facing immense uncertainty and anxiety as they cope with this extraordinary situation.

Incredibly, at this perilous juncture, the Uttar Pradesh (UP) government has sought to initiate punitive proceedings against the founder editor of The Wire, Siddharth Varadarajan, for an article on the participation of UP Chief Minister Yogi Adityanath in a Ram Navami celebration in the midst of the lockdown. This highly condemnatory act sends a chilling message to the media. On the other hand, there is little or no action against media anchors that indulge in mischievous and inflammatory broadcasts.

In this backdrop, the media industry has effected job losses and wages cuts with impunity. At least 16 employees of News Nation English digital team were summarily sacked on April 10 and told that their dues will be given at the end of the month. The Times of India sacked its entire Sunday magazine team. At least 15 employees of Sakal Times, the Marathi newspaper, were told to submit their resignations by March 31. At least 45 members of the Quint news site were asked to proceed on leave without pay, releasing them from a non- compete clause.

Media houses have summarily shut down, though this is violative of the Industrial Disputes Act, 1947). Hamara Mahanagar, Hindi newspaper from Mumbai, shut down on March 18 citing ‘poor business viability’. Outlook magazine and Nai Duniya suspended publication.

Citing inability to pay due to the lockdown, the Indian Express and Business Standard asked staff to take salary cuts. Bloomberg Quint will impose a steep salary cut for April, stating that it ‘expects to resume the normal salary cycle from May’ but makes no mention of making up the lost salary for April.

On Mar 23, 2020, the Union Ministry of Labour issued an advisory to employers not to terminate employees, particularly casual or contractual workers, or reduce the wages of workers. The Maharashtra state government issued a similar advisory, advising employers not to retrench workers or reduce wages.

Despite these advisories and legal provisions that disallow retrenchments, terminations or even suspension and closure of publications without due process, media companies have gone ahead with these measures, unmindful of the fact that, in a lockdown of such an incredible magnitude people can barely move out, leave alone go job-hunting.

The BUJ points out that closures, layoffs and retrenchments are not a new phenomenon. In the last few years, scores of media employees have lost their jobs, with little or no compensation. The media industry, led by prominent, cash-rich and politically powerful media houses, has flouted directives of the Hon’ble Supreme Court of India to implement the 2011 Majithia wage board award for newspaper and news agency employees. Broadcast and digital media workers don’t even have the fig-leaf of security offered by the Working Journalists Act, 1955.

The struggle to get the recommendations of the Majithia Wage Board implemented in newspapers and news agencies has been going on in various labour courts of the country and many of these cases are now at the final-arguments stage. It would be pertinent to note that the recommendations of the Majithia Wage Board are statutory in nature and are also applicable to all contractual employees.

At the same time, in an overall context of economic slowdown and precarity at the workplace, it is understandable that those who have jobs in the media are simply thankful that they continue to work and draw salaries. But this sense of security is false and illusory: your turn could be next.

Undoubtedly, the lockdown due to Covid-19 has plunged the economy into a major crisis and all sectors have been affected very adversely. But, at such an uncertain and anxious time, these retrenchments are callous beyond belief. The media industry needs to collectively respond to this situation, keeping the welfare of its workers central to its considerations.

In the circumstances, the BUJ demands: