Amid Shutdown, a Private News Channel Connects Thousands in J&K

Gulistan News has opened a helpline to help connect distressed Kashmiris during the communication blockade imposed. 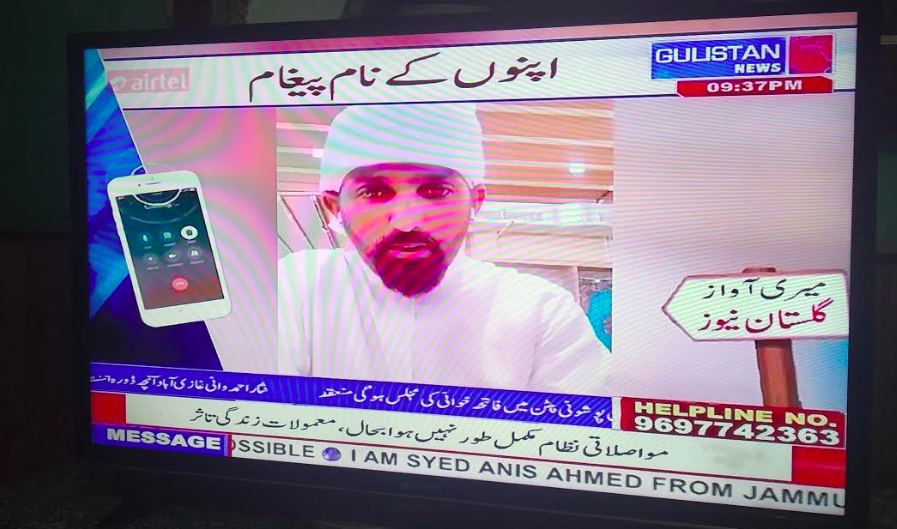 “I’m Bilal Ahmed Bhat from Kulgam (south Kashmir). I’m speaking from Saudi Arabia. I want to convey a message to my family that I’m fine here. Hope you’re fine too. If possible, please talk to me on the phone. I want to talk to my mother.”

“I’m Khurshid. I want to send another message to my family. I’m fine here. I thank Gulistan News. You guys are doing an amazing job to connect distressed people…”

“My name is Mudasir Nabi. I’m calling from Muscat, Oman. I want to convey a message to my family members and friends in Kashmir. I’m fine here and I hope you’re all fine there…”

These messages are among hundreds of voice calls, video and text messages telecast daily on Gulistan News, a popular New Delhi-based satellite news channel that covers the Jammu and Kashmir region. After the Centre decided to dilute Article 370 and bifurcate the state into two Union Territories on August 5, a communication shutdown has been imposed on the region. Since then, the news channel has helped connect thousands of families and Kashmiris based outside of J&K who have wanted to contact their family members back home but were unable to do so.

Broadcasting to Jammu and Kashmir from New Delhi, Gulistan News was the first news channel to start a helpline telephone service for distressed people of Jammu and Kashmir who had suddenly become disconnected from each other and the outside world.

Soon, another news channel, ETV Urdu, also began running a ticker of messages sent by people living outside the state for their families back home in Kashmir.

Even these days, when the landline telephones have started ringing again in the Valley, Gulistan News channel receives and airs about 600-800 video messages, voice calls and text messages daily from Kashmiris based outside the state. The channel also airs messages under the title “Apno kay nam paigam” (‘message for our near ones’) sent by people in Kashmir for their family members who are currently based outside the state and living in other countries.

“We have received and aired more than 30,000 messages in the form of voice calls, text messages and video calls from distressed family members based in different states and even from other countries who wanted to send their messages to their families in Jammu and especially in Kashmir as they couldn’t reach to them since August 5 due to the communication shutdown,” Ishfaq Gowhar, the executive editor of Gulistan News, told The Wire.

“We also received and aired more than one lakh text messages since August 5 which were subsequently shown round the clock on the channel as a ticker on the screen. More than 20,000 audio messages have also been aired in between news bulletins since August 7,” said Gowhar, a broadcast journalist and anchor from Kashmir currently working in the New Delhi office of the news channel.

According to Gowhar, one of the advantages their channel had was its availability on all DTH and cable TV networks, which ensured it was watched in most homes in the Jammu and Kashmir region, even as telephone lines were snapped by the authorities.

“On August 7, after holding a meeting on the situation, we decided to start a dedicated telephone helpline service at our office for the distressed people outside the state who were unable to contact their family members due to the communication blockade,” said Gowhar.

Gowhar and three other employees working in the channel from Kashmir and Poonch region were instrumental in initiating the telephone helpline service with the full support of the channel. As incoming calls increased exponentially with every passing day of the blockade, Gulistan News ensured that it would be manned round the clock to run as many messages and video calls as they could on the channel. 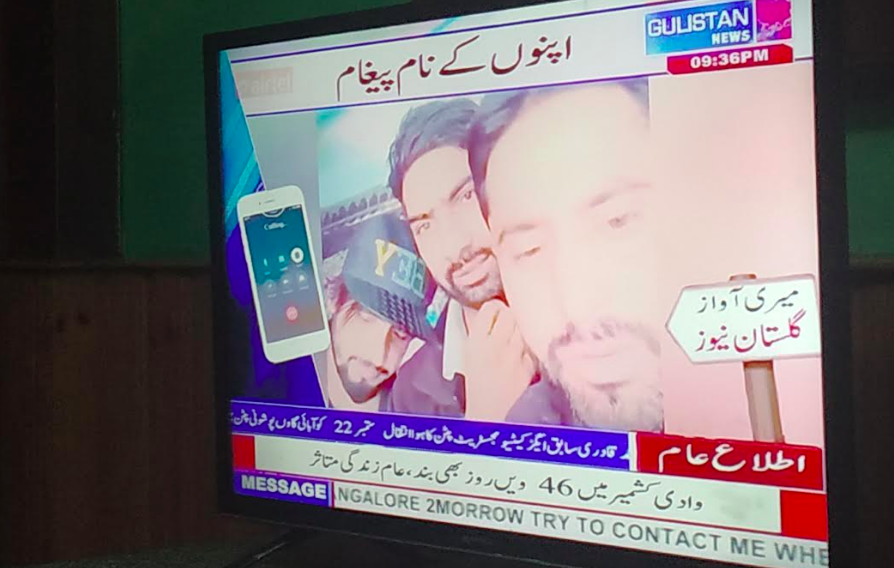 “Our social media team was also flooded by messages by Kashmiris living outside the state and in other countries on twitter and facebook which they would then pass on to the channel even when they would go home after a full day of work,” said Gowhar.

The channel provided a dedicated helpline number (9697742363) from Delhi, which was displayed on the screen. The number went viral, shared widely among non-resident Kashmiris in other countries and those studying and working outside the state.

Soon, people started sending voice and video messages, text and WhatsApp messages for their families back home. These were subsequently telecast on Gulistan News for people to see on their TVs. Calls and messages were received from distressed Kashmiris living in countries like Qatar, the US, China, Japan, Saudi Arabia and other countries. All of them wanted to reach out to their family members and ask about their condition, Gowhar said.

“We also received hundreds of calls and messages from the Hajis in Saudi Arabia as they were unable to contact their families since August 5. There was a lot of panic and chaos among people in the initial week of the shutdown, as they were apprehensive about what happened in Kashmir,” said Gowhar.

At 8 am on August 7, the channel aired the first message after the telephone helpline was thrown open. It was a call from a distressed Kashmiri student studying in Dubai who wanted to know what was happening in Kashmir as he could not contact his family members or friends.

“Even these days, when landlines have started working, we get hundreds of calls and messages every day which are then telecast on the channel,” said Gowhar. “We also get some messages and calls from districts in Kashmir for family members who are based outside the state. We are trying to connect people from both sides.”

Gowhar specifically remembers one distressed call from a Kashmiri woman who called the helpline number from New Delhi in the first few days of the communication shutdown. She wept as she spoke about her ailing father in their home in the Batamaloo area of Srinagar and said she unable to contact him since August 5. She said her father had cancer. “She just wanted to know if her father was alive,” recalls Gowhar. “All of us in the office had tears in our eyes when we heard her plight.”

After some landlines started working, Gulistan News also sent a person from their Srinagar office to the woman’s home and delivered her messages. They recorded her father’s video message, saying that he was doing fine, which the channel later sent to her WhatsApp number.

Recently, the channel has been getting distress calls from Kashmiri students studying in Punjab, Chandigarh and other places who have been unable to contact their families for urgent money transfers. The students say they’re running out of money and that they need to pay their college and fees and rent.

“The state government should at least inform their colleges to go easy on these students because of the prevailing situation in the Valley,” said Gowhar. “They can pay the fee and rent later, after the communication shutdown is lifted and the situation in the valley normalises.”

In addition to telecasting messages, videos and voice calls from Kashmiris living outside the state, Gulistan News’s office in Srinagar has also been reached by hundreds of local people trying to send condolence messages and marriage cancellation notices, which were later telecast as ticker messages.