In Kashmir, the State Sees Media as Being 'Part of the Problem'

Physical harm, death threats, political arm-twisting and overt and covert pressures have become a part of life for journalists working in the Valley. 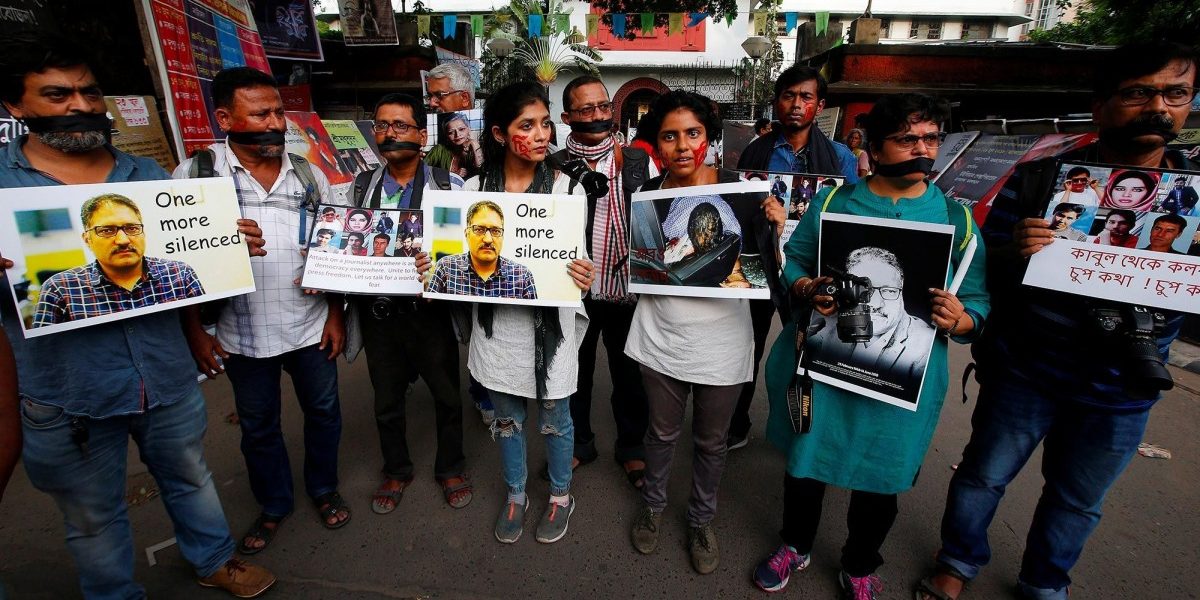 To focus on this critical issue, the United Nations has declared November 2 as International Day to End Impunity for Crimes Against Journalists. This is an effort to “make the perpetrators understand that their crimes will not remain unpunished, that 1000 journalists will rise when one will fall…”

Srinagar: On Tuesday, October 30, video journalist Aijaz Dar was covering the oath-taking ceremony of newly-elected municipal councillors from Shopian district – the stronghold of militants – when he received a WhatsApp message with the news of an attack by rebels on the army’s patrol in an adjacent village.

Dar and his colleague left the event midway and rushed to the spot in Memander village in his car, unaware of the clashes that had already broken out between the local youth and security forces.

“I parked my vehicle at a distance and we were about to reach the spot when a police’s special operation group person from J&K police came down on the road and directly aimed his gun at us. Sensing danger, I instantly and repeatedly shouted ‘We are from media’. My colleague was even wearing a press jacket. But he (a Special Operations Group official) didn’t bother to listen and fired a volley of pellets at us,” recalled Dar.

A stringer with a New Delhi-based news channel, Dar suffered multiple pellet injuries to his forehead and shoulder and had to be rushed to a hospital for treatment.

The incident, which evoked strong condemnation from the media fraternity, aptly describes the situation in which journalists operate in Kashmir, often facing the wrath of state and non-state actors during the discharge of their duty of storytelling.

During the last 30 years of conflict, journalists have often found themselves at the receiving end of such brazen attacks – which have become more frequent post-2008 when Kashmir witnessed its first mass uprising.

“The reason is simple,” said Shams Irfan, a reporter with a local weekly magazine, Kashmir Life. “Today, media is seen by the state as being part of the problem in Kashmir.”

Irfan, who has been with the weekly magazine since 2011, has worked on varied beats during his career. For the past two years, however, he has been writing on Kashmir militancy. And during this time, he has “realised one thing”.

“If you cover a militant funeral or an encounter or report on a human rights situation, you are often seen as glorifying militancy and that is where the problem starts for a journalist,” Irfan said.

However, it is not just physical danger – like in the case of Dar – or preconceived conclusions drawn by the state authorities – as Irfan described – which journalists face in the Valley, there are other challenges also, according to Aakash Hassan, a reporter with News18.

On October 11, Hassan, along with a group of journalists, was on his way to Lolab, a frontier area in northern Kashmir, almost 100 kms from Srinagar, to cover the funeral of scholar-turned-militant Manan Wani. But they were stopped by forces on the border of Kupwara town and prevented from covering the funeral – this after having travelled almost 90 kms.

“We were kept waiting for almost three-and-a-half hours and it was only when the funeral was over we were allowed to proceed at around 7:30 pm,” said Hassan. This deliberate denial of access to the site of news development and conflict is often exercised as a means to block the news, leaving journalist in a state of helplessness.

Asif Qureshi, who is the Kashmir bureau head for ABP News, was among several journalists beaten by the police on October 17 at the encounter site in Fateh Kadal area of summer capital Srinagar. He too talked about “deliberate attempts” to make access difficult for journalists to cover news. “The ground realities have changed for a journalist in Kashmir and of late there are efforts to muzzle media,” he maintained.

Altaf Baba, who works as north Kashmir’s bureau head for Greater Kashmir, Valley’s largest-selling newspaper, talked about another form of threat which he described as “psychological pressure”.

“I have many times faced situations when officials from state administration or senior police and army officials haven’t responded to my calls for days together only because I would write about issues which they didn’t want to be highlighted,” said Baba.

This kind of a situation when a government official or a security officer denies or blocks access to a journalist, in some cases, even leads to self-censorship. “It is an invisible weapon used to convey the message and even a threat,” said a senior scribe.

Of late, journalists in Kashmir have been victims of peoples’ anger too and such incidents have repeated themselves, particularly after the summer unrest of 2016. There is distrust among locals towards journalists and they are often accused of being in the state’s pocket.

Senior journalist Khalid Gul, who is based in south Kashmir – hotbed of local militancy in the Valley – says while going out to cover a gunfight or militancy-related situation, there is always a fear of being viewed with suspicion by locals.

“Over the years, mainstream media has built a certain narrative on Kashmir, and every journalist – whether working with local or outside media outlet – is being looked through that prism. People often confront journalists with questions about the use of vocabulary in media reports,” explained Gul.

On October 21, when seven civilians were killed in a blast at the site of a gunfight between security forces and militants in Kulgam district, a photojournalist from Anantnag, Mir Waseem was confronted by a group of local youth even as he was helping in the evacuation of injured from the site in his own car.

“The atmosphere was surcharged and understandably…all of a sudden, a group of youth arrived and started questioning my presence,” said the photojournalist. In the incident, Waseem suffered some damage to his vehicle as well.

Another photojournalist said he has faced “such situations” at least on three occasions in the past two years and recalled an incident when he was physically assaulted by people at an encounter site and faced damage to his camera as well.

Qureshi said earlier media would face hostility from only one side (forces), but nowadays this problem crops up from “all sides”. “People are angry with us for obvious reasons. They feel media is not presenting the happenings in Kashmir as they take place…on the other side, security forces have their own version of truth which they think is the right one and only that should get published,” said Qureshi, adding that peoples’ anger towards media was not limited to covering conflict only but human tragedies as well.

Also read: How Free is the Media in the Kashmir Valley?

Another senior journalist, however, said there was no equivalence between “targeting” by the state and people. “This anger among people emanates from years of misrepresentation, deliberate most of the times, by mainstream media about the Kashmir situation,” he argued.

According to him the “culture of parachute journalism” has added to problems of journalist operating in the Valley. The “parachuted journalists” often get special access to a site where news is developing and then end up presenting a picture contrary to the situation on the ground, he reasoned.

While the challenges a reporter faces on the ground are visible and discussed, the pressure under which an editor of a new organisation operates often gets lost in this debate. At times, such pressures even take the shape of censorship and threats to gag a newspaper or exercising of control by regulating advertisement revenue.

This arm-twisting was even talked about by the International Federation of Journalists (IFJ) in its report last year. “The government exercises control through regulating advertisement revenue and there is pressure to toe the official line or face financial insecurity,” the report states.

Post-2016, media in Kashmir has on several occasions faced gag. A week after rebel commander Burhan Wani was killed in July 2016, many newspaper offices including that of Greater Kashmir were raided by J&K Police and their copies seized to prevent news reaching from people when the state was witnessing a complete internet blackout.

The crackdown lasted for three days and the government spokesperson, Naeem Akhter, went to the extent of justifying it. “It is a temporary measure to address an extraordinary situation,” Akhter had said.

The same year, on October 2, the government banned the local daily Kashmir Reader saying that it can “easily incite acts of violence and disturb peace and tranquillity”. The ban on the newspaper was lifted three months later. In June this year, a United Nations High Commissioner for Human Rights (UNHCR) report, ‘Situation of Human Rights in Kashmir’ highlighted restrictions on freedom of journalists, and targeting of media house by the state in 2016.

While the report was dismissed by the Center, calling it “fallacious and motivated”, the situation on the ground speaks otherwise. A freelance photojournalist from Pulwama district, Kamran Yusuf was arrested by the NIA on September 5, 2017, and charged with sedition for his alleged involvement in a “conspiracy against the nation”.

In its chargesheet, the investigative agency accused Yusuf of being involved in “several stone-pelting incidents”, claiming that he was not a “real journalist” and has never covered government’s development work. The charges didn’t stand the test of law and Yusuf was finally released after six months of detention in March this year.

Also read: Want to Be a Journalist? The NIA Will Now Tell You How

There have also been fatal attacks on journalists. The IFJ report highlighted this grave situation, pointing out that 21 journalists have been killed in the region “either directly targeted or caught in the cross-fire” – the latest one was the killing of Rising Kashmir editor-in-chief Shujaat Bukhari outside his office at Press Enclave on June 14, 2018, a day before Eid.

The report pointed out threats, “both visible and invisible and pressures from various quarters” that journalists face day in and day out in Kashmir. Physical harm, death threats, political arm-twisting and overt and covert pressures have become a part of life for journalists working in the Valley.

From time to time, media persons have protested against state highhandedness and even threatened suspension of operations against blackout attack on colleagues. “What else can we do?” asked Shopian-based video journalist Dar, who resumed his work just 12 hours after a narrow escape.