The programme allegedly hinted that money will be dropped from helicopters during the lockdown period. 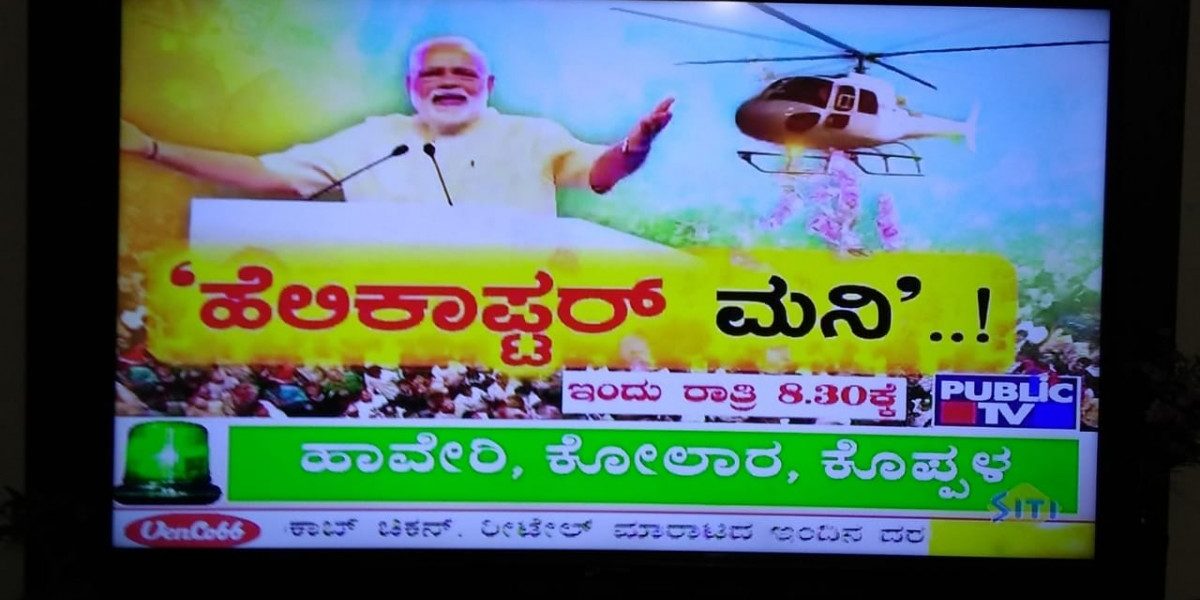 A screengrab of the programme aired by the channel.

New Delhi: A Kannada news channel was on Thursday served a show-cause notice by the Ministry of Information and Broadcasting (MIB) for airing a programme which claimed that the Centre was planning to drop money from helicopters to the poor during the nationwide lockdown imposed to contain the spread of the novel coronavirus.

However, the management of the news channels said that the programme has been seen in “bits and pieces”. A YouTube video uploaded by the channel has a serious discussion on the economic concept called ‘helicopter money’, which argues for more currency notes to be printed and more money to be pumped into the market as a form of relief. It is unclear if the channel aired any other shows in which it claimed money would be dropped from helicopters.

The MIB’s notice said that the channel was “spreading false information, creating panic and social unrest”, calling the show titled, “Helicopter Money”, which was aired on Wednesday, “false, mischievous and deliberate”. The programme allegedly claimed that the Centre would drop money from helicopters during the lockdown period.

PIB under Ministry of I and B has issued a notice to Public TV for Violation of Cable Television Network (Regulation)Act and Codes by Broadcasting “Helicopter Money – Helicopternalli Surithara Modi”.@PrakashJavdekar @MIB_India @PIB_India @PIBFactCheck @DG_PIB pic.twitter.com/KxYJ3LFAKY

According to news agency PTI, a Twitter user took note of the programme and registered a complaint with Union information and broadcasting minister Prakash Javadekar.

The fact check team of the Press Information Bureau, under the Ministry of Information and Broadcasting, refuted the claim.

In its notice to the channel, PIB said, “You are hereby directed to show cause why your channel should not be taken out of air immediately.

You are instructed to send your reply in this regard within 10 days of receipt of this notice.”

“When the whole country is fighting COVID-19, your channel, instead of creating awareness and educating the public, spreading false information, creating panic and social unrest,” says the notice, which is signed by I&B additional director general M. Nagendra Swamy.

“In view of the serious violation of Cable Television Networks (Regulation) Act, 1995 and rules framed there under, you are hereby directed to show cause why your channel should not be taken out of air immediately,” the notice says.

According to Deccan Herald, in November 2016, during demonetisation, the same news channel had run a news report claiming that the newly introduced Rs 2,000 notes are equipped with “nano-chips”. This report was also dismissed as fake news.

Reacting to the notice, the management of the news channels said, “A programme which has been seen in bits and pieces and those who have not even seen the programme appears to have complained. Notice will be replied accordingly.”

“Helicopter money will be generated through the implementation of Quantitative Easing Policy by the RBI,” sources in Telangna’s finance department told the New Indian Express. According to the newspaper, under the Quantitative Easing Policy, the RBI can permit state governments to raise bonds for longer periods and print extra currency notes to generate ‘helicopter money’ that would increase the purchasing capacity of individuals.

According to The News Minute, a video titled ‘Helicopter Money’ that has been uploaded to the channels YouTube account shows a serious discussion on the economic concept of helicopter money and does not discuss the government dropping money out of helicopters.

In the bulletin, the reporter says, “What is Helicopter Money? Economist Milton Friedman coined this term. According to him, it is understood that from the sky, via helicopter, money will simply be thrown. This is called helicopter money. RBI will print currency notes and give it freely to the government. Helicopter money need not be returned to RBI. The government will then give it to the needy classes – coolie workers, factory workers, small businesses, medium scale enterprises, and farmers.”

The News Minute reported that it is unclear if the channel had other programmes on this topic in which it claimed that the government would drop money from helicopters.