The media is supposed to question those in power, not happily go along with the official narrative. 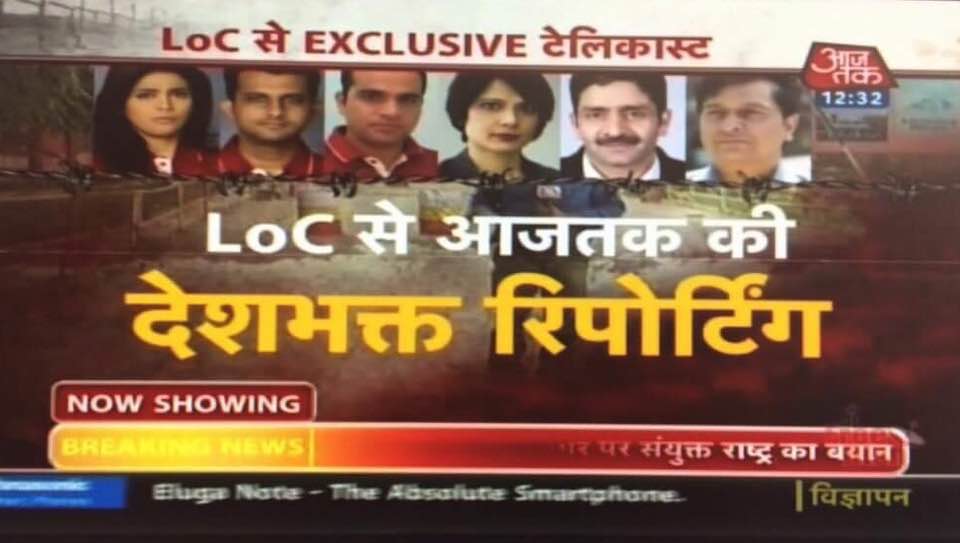 'From the Line of Control, Aaj Tak brings you nationalist reporting'. Promotional material for Aaj Tak.

Within days of the terrorist attack on Uri, in which 17 soldiers were killed, and even as the government mulled over various options, some newspapers and digital platforms published a story about a secret operation by Indian elite forces who entered Pakistan Occupied Kashmir and killed 20 terrorists. Or, as one of the outlets said, “neutralized” them, which sounds impressively like military jargon.

If true, this would have major repercussions, since it would effectively mean an incursion into Pakistani territory, even if in name that part is Azaad Kashmir.

The army was quick to deny that such a raid took place. One of the website’s stood by the story, insisting they had confirmed the facts. Many other newspapers, channels and digital platforms chose not to write about it, mainly because it was non-verifiable.

More than the story itself and its authenticity or lack thereof, was stood out was the headline and hashtag used by one of the sites – “Uri Avenged” – implying clearly that this was a tit for tat operation by India. This is muscular, nationalistic editorialising that aims to rouse passions in the reader, quite a contrast from the detached tone that the media used till not too long ago. Those days are now gone. Headlines refer to soldiers as martyrs and heroes and journalists now sound like cheerleaders of the government. Social media is full of cyber-warriors with advice on how to annihilate Pakistan, speaking glibly of the nuclear option as the final solution. Television talk shows discuss military strategies on how best to enter a sovereign country, showing little or no understanding of international law. Thundering ex-generals, when they are not getting emotional, speak of breaking Pakistan into several parts. BJP spokespersons, never short of colourful rhetoric, declare blithely that the country will not be around to celebrate its independence day next year. And not to forget those who feel they have done their duty by forwarding a WhatsApp message about what patriotic Indians should now do.

Private citizens are well within their rights to express their views, however extreme and even if bordering on lunacy, but surely journalists should remain objective and refrain from such over-emotionalising? Their job is to report, calmly and accurately, not wave the flag or indeed, speak up for the government.

The use of words like ‘braveheart’, ‘martyr’, ‘heroes’ is an American import, which has swiftly been accepted in India. I don’t recall newspapers using such words earlier – soldiers were soldiers and that is it. The Kargil war, shown in real time on television, was probably the first occasion when journalists began valorising the army instead of dispassionately reporting what they saw and heard. Now, with the advent of the social media and a breed of journalists who probably think objectivity is a left-over from the Jurassic era, it is all out into the open.

But aren’t Indian journalists allowed to be nationalistic too? Yes, they are free to harbor nationalistic feelings, but their professional commitment should always be to the news. Rah-rah journalism is pamphleteering, and worse, panders to cheap and easy sentiment rather than informing and educating. Every Indian citizen will want the government to take some action against the perpetrators of the Uri terror attack, but when headlines begin to use words like “avenged”, it becomes provocative.

Our TV talking heads, led by some perpetually angry anchors, appear to have not just called for war, but led the troops themselves and even declared victory. Analysts who should know better have become part of the shouting brigade. All this increases TRPs and unique visitors (and revenue and valuation too), but the intelligent viewer knows it is all a cynical exercise. That, however, is no comfort because it feeds into prejudice and jingoism of the worst type. ‘The war room is ready, now when are we going to attack Pakistan?’ Aajtak programme after Uri

Ironically, the government itself, despite all the attendant noise, is handling things much more soberly. So far, the reaction has been muted, relying on diplomacy rather than the military. It is possible that some below-the-radar actions may be contemplated or may have been conducted, but generally, apart from a few off-hand, fist waving statements, no rash action has been taken. That may yet come, but so far the displays of uber-nationalism have come from the party, social media users and journalists.

The media is supposed to ask questions of those in power. And there are many questions waiting to be asked about the Uri attack. For instance, the intelligence lapses — how and why did these happen? After the Pathankot attack, was security at military installations not beefed up? Shouldn’t someone take responsibility for this? Try and think how the BJP would have gone after Manmohan Singh and his government had something like this happened under his watch. (You don’t have to think too hard — just read up tweets by Narendra Modi and many others, including journalists, which are freely available online.) And yet, we see hardly any questions or demands for accountability and needless to say, no resignations or sackings. The cohort of nationalist media persons, who only two-and-a-half years ago were heaping criticism and insults on Singh, seem strangely silent now.

The bitter irony is that when a newspaper does write a story that does not align with the official narrative, the government demands that stories on defence be submitted for ‘pre-verification’. That is bureaucratese for censorship, which is unacceptable. Clearly, despite so much support from journalists, the government is still not satisfied and cannot tolerate even a smidgeon of skeptical questioning; it prefers blind supporters rather than professionals doing their job. This should worry all journalists – the portends for the future do not look good.

This piece first appeared at www.deccanchronicle.com