Journalism as News Laundering and Bhakti

It would be fair to say that not since 1947 has the standard of the media plumbed the depths it has today; it is, in fact, no longer the fourth pillar of democracy but its fifth column, hollowing out the republic from within. 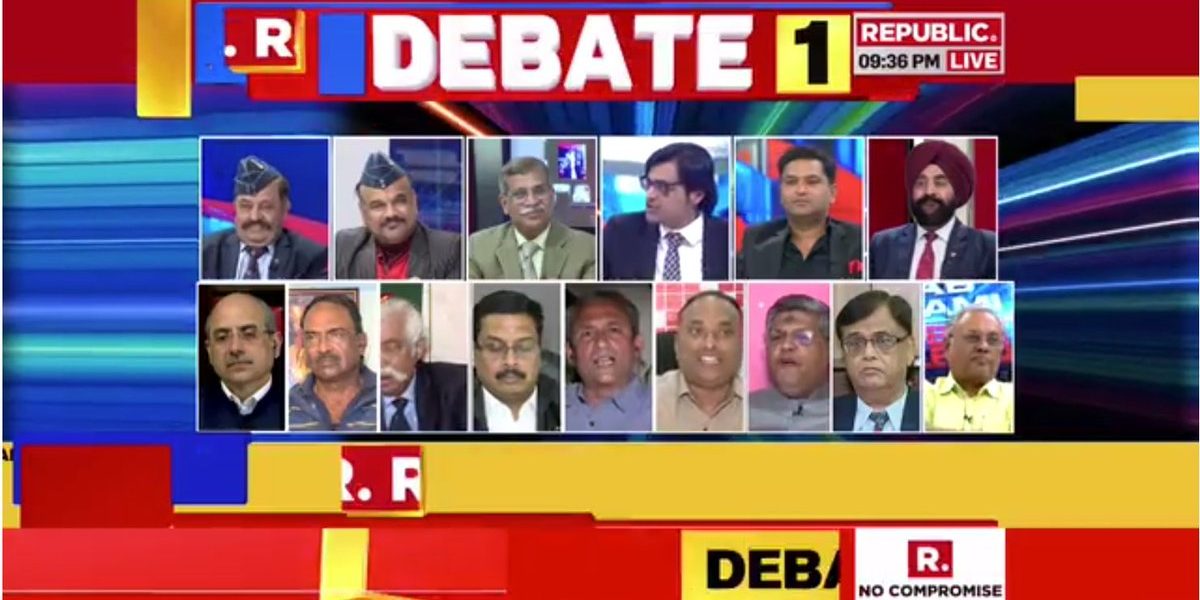 Screenshot of what passes for television news in India. Photo: Ravi Nair/Twitter

Move over, Arnab Goswami and Sambit Patra, the putrefying corpse of Indian journalism has a new poster boy – none other than our resident, apoplectic walrus, Major General G.D.Bakshi.

The good general has ascended (or descended, depending on whether you are a bhakt or a gentleman) to hitherto unplumbed heights (or depths) of depravity by recently calling a co-panelist a motherf*&^%r in a televised discussion.

It is quite apparent that his nationalistic credentials and dubious expertise in history notwithstanding, this rabid apologist for the government has not been able to make the transition from barracks to television studio without losing the inherent coarseness that is probably now a part of his character. But I don’t blame him, for he is a faithful depiction of the sorry state of Indian journalism these days.

It would be fair to say that not since 1947 has the standard and character of the fourth estate plumbed the depths it has today; it is, in fact, no longer the fourth pillar of democracy but has become its fifth column, using its privileged status and constitutional freedom to hollow out the republic from within. Under the onslaught of inimical forces generated since 2014, most publications and channels have mortgaged their spines to remain in favour with the powers that be; only a few outposts and editors are still holding out, but they have now been dealt a mortal blow by the corona virus and may not long survive. For, unlike Narendra Modi’s two front war, the press is under attack on three fronts.

For a regime whose stock in trade is lies and untruth, it is absolutely essential that its dissembling not be found out; the free press therefore has to be tightly controlled and inconvenient editors, anchors and reporters have to be taken out of circulation, in more ways than one. Easy enough for a government which has all corporates on a leash, and the corporates have the media in their pocket. The pest control process began smoothly enough as outspoken print journalists like Harish Khare and TV anchors like Karan Thapar, Vinod Dua, Abhisar Sharma and Punya Prasun Bajpai were eased out of their positions in the big newspapers and channels. The Arnab Goswamis, Rahul Shivshankars, Navika Kumars and Anand Narsimhans took over, quickly fell in line and rebranded themselves as megaphones of the government. But a few pesky individuals still held out; it was time to roll out the heavy artillery.

And so began the age of the F.I.R under the convenient smokescreen of an imported virus. The Delhi based Rights and Risk Analysis Group, which tracks such things, has recorded that 22 FIRs have been filed against 55 journalists between March 25 and June 31 this year, for reporting on COVID-19 and for exercising freedom of expression – the former is unwelcome and the latter is anathema to the governments of the day, notwithstanding which party they represent. The most blatant among these  cases are those against Siddharth Varadarajan of The Wire, Vinod Dua of HW News, the columnist Aakar Patel, and Supriya Sharma of Scroll (she had simply filed a report depicting the poor living conditions in Dohari village of Varanasi, adopted by the Prime Minister under the Sansad Adarsh Gram Yojana.) This is, of course, par for the UP government, which had earlier filed an FIR against a district reporter, Pawan Kumar Jaiswal, for his story on the poor quality of food served under the mid-day meal scheme. None of these cases will end in conviction, of course, but they will have served their purpose of further gagging an already intimidated media. It does not matter that such actions have brought the country to the 142nd spot in the Press Freedom Index. Badges of dishonour don’t matter as long as you keep winning elections.

In this unequal battle, the press has been rendered defenceless because the higher judiciary has decided to don its blinders precisely when it should have been keeping an eagle eye on an executive which has appropriated to itself unprecedented powers under the cover of the pandemic. The judiciary’s recent decisions suggest journalists perceived to be close to the government and the ruling party are kindly looked upon, not so those who speak truth to power. The scales of justice would not today pass any metrology test. The FIR against Arnab Goswami (who gave a blatantly communal angle to the migrant exodus in Mumbai) has been suspended by the Bombay high court, as was the case against Amish Devgan (who called the revered Sufi saint Moinuddin Chishti ” Lootera Chishti” in a June 15 telecast). However, no such “entente cordiale” has been shown by them in the case of  Vinod Dua and Aakar Patel for alleged offences that are imaginary at best and maliciously contrived at worst.

The government is not content to just put a few journalists in police lock ups. For those who are still outside, it constantly issues helpful “advisories” on how they should do their job: how to show deference to a prime minister, how to report on the pandemic, the correct manner of reporting on the standoff with China. It does not even stop short of issuing threats, as Prasar Bharati recently did to the country’s oldest and most respected news agency, PTI, over its interviews with the Chinese Ambassador and our envoy in Peking. It termed these, what else, ‘anti-national’, and announced that it was ” reviewing its relationship” with PTI, which is bureaucratese for cancelling the Rs. 7 crore or so it pays the agency for its services every year.

It does not help the cause of the free press that the only other national news agency, ANI, has already gone belly up when it comes to honest reporting. It is a hand maiden of the government, competing with the likes of  “nationalistic” TV channels in the sycophancy sweepstakes. It tailors its releases to fit the government’s tastes and conducts interviews of the prime minister, home minister and other worthies with a Victorian politeness that extracts everything but the facts. The difference between news reporting and news laundering is fast disappearing.

This being the ecosystem of journalism in India today, it should come as no surprise that the field is being taken over by parasites who destroy the very host they feed on. The so-called “news” channels, especially the English ones, deal only in views, not news. Their republican credentials and reflection of the times, now or previously, is all a charade for they have become the ultimate recyclers. They recycle the government’s handouts and untruths as news, and the stench which results exceeds that of the Ghazipur landfill in my area. Their arrogant, jack-of-all-trades, opinionated anchors spread the poison of communalism and intolerance on a nightly basis, defending the indefensible, spawning bullies and reprobates, reducing discussion and debate to a Billingsgate spectacle. They are asking questions all the time, but of the opposition and not the government of the day. They don’t wait for the answers, because they have already manufactured them “en studio”; they do not serve a nation but an individual, a revived bhakti cult.

The print media is only slightly better. Its editorials no longer have the courage of their convictions, its op-eds pussy-foot around issues instead of tackling them head on. They are more akin to exercises in tightrope walking than courageous journalism.

Precisely when Indian journalism has reached its nadir, it has been struck a mortal blow by the pandemic. Already in dire straits before the pandemic, the economic turbulence and loss of both readership and advertisement revenues is forcing many papers, on-line sites and channels to shut shop. The circumstances are particularly difficult for small town newspapers who barely survived at the best of times. Since March there have been large scale layoffs, salary cuts, forced furloughs and closures, even in the biggest media organisations. Hundreds of journalists have lost their jobs.

This is an alarming trend for the health of our democracy. Mofussil and small town publications are vital in keeping a check on governments for it is they who have a finger on the real pulse of nations and are the first to report on a government’s misdeeds, doing the spadework for the national media. Equally important, as Cyril Sam of NEWS@COVID 19 puts it, “Each lay off and closure signals our information eco-system becoming poorer and our information sources becoming poorer. Each layoff, cut-back, closure also signals the weakening of democracy in India as newsrooms hollow out and there are fewer journalists to keep a check on power and raise questions in the public interest on our behalf.”

India’s free press is at its weakest precisely at the moment it is facing its most severe challenges since Independence. It does not help, but it was inevitable, that it is now represented by someone like Maj Gen G.D. Bakshi.

Avay Shukla is a retired IAS officer. A version of this article appeared on his blog and has been edited by The Wire for length and style.