The streaming platform did not upload the episode criticising the Indian PM and discussed the political situation in India after the CAA was passed.

On the latest episode of the HBO show, Oliver segued into reactions in India about the segment on Modi. He criticised Hotstar’s ‘self-censorship’ and was also surprised to find that the streaming platform, which is owned by Disney, has been censoring jokes he has made in the past on famous Disney characters such as Mickey Mouse and Donald Duck.

Oliver questioned, “Why did they do that? It’s hard to say, but it might be because Hotstar is actually owned by Disney, and they seem extra-sensitive about Disney references.” The joke about Mickey Mouse was that he is a cocaine addict, while he described Donald Duck’s penis as being shaped like a corkscrew (an anatomical fact about real-life ducks).

He called these ‘Disney facts’ and also referenced the fact that he played the character Zazu in the 2019 movie The Lion King (a film produced by Disney).

It has come to John Oliver’s notice that Hotstar is censoring his show in India. pic.twitter.com/HqwfjMfxzX

“I frankly resent that factually accurate joke being cut out almost more than I resent our Modi episode being pulled,” Oliver said. “And let me say this to Hotstar right now. If you think that you have to remove anything that reflects poorly on Disney from this show, I have some bad news for you, my friend. I’m f*#@ing Zazu right here,” he said.

“Everything that comes out of this beak is a ‘Disney Fact.’ If I say that Cogsworth [from Beauty and the Beast] collects Nazi memorabilia, guess what? That’s canon, baby. That’s a ‘Disney f#@*ing Fact’ right there. And for the foreseeable future, Hotstar, you can look forward to learning a lot more of them on this show because we’re going to be sliding them into our stories like Chip and Dale slid into Richard Gere. That’s right — ‘Disney Fact,’ motherf#*#@rs.”

Oliver has been known to poke fun at American telecom giant AT&T – which owns HBO, the channel that airs Last Week Tonight With John Oliver, mocking their customer support and service. NDTV, while reporting Hotstar’s censorship of the joke on Mickey Mouse in November last year, pointed out that ironically, the streaming service’s popularity rose on the promise that it would not censor another popular HBO show, Game of Thrones.

On the show, Oliver also played clips of Arnab Goswami criticising him for the Modi segment. The Republic TV editor called Oliver an ‘ignoramus of exceedingly global proportions’ and a ‘third rate TV host’. While the comedian did not take offence to this description, he retaliated at Goswami’s claim that Oliver had ’embarrassed himself’.

“I’ll give you ignoramus i’ll even give you third-rate tv host my researchers assure me that’s an actual compliment — but I embarrass myself? Who the f#@k do you think you’re talking to?!” Oliver exclaimed, speaking about the embarrassing things he has done on the show. “I am beyond capacity for shame. You can’t hurt me!” Oliver exclaimed.

Episode’s of Last Week Tonight are uploaded by Hotstar at 6 am on Tuesdays and it now remains to be seen if the latest episode will also be censored.

Self-censorship of episode on Modi

Two weeks ago, Hotstar did not air the episode that criticised Modi and spoke about the protests against the CAA. An email sent to Hotstar asking why the episode was not uploaded went unanswered. However, the information and broadcasting ministry said the government wasn’t involved in the matter. 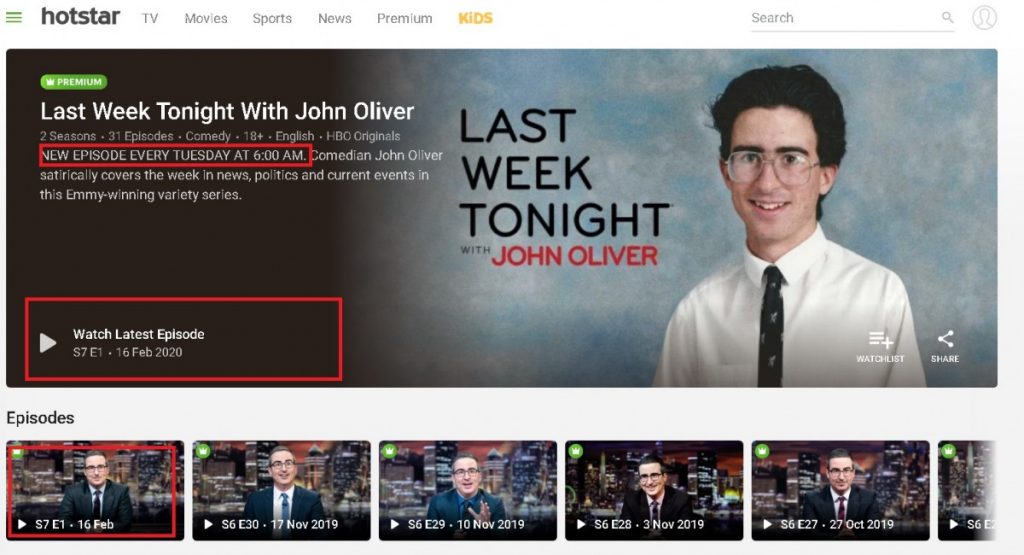 A screenshot of what greeted Indian users of Hotstar on Tuesday. The latest available episode is the one that was on February 16. Credit: The Wire.

Digital content companies and streaming services operating in India have had to ‘self-censor’ their content in the past. As The Wire has reported, Amazon Prime regularly censors content regarding cows or beef so as to not hurt ‘Hindu sentiments’. In 2019, the streaming platform also pulled an episode of the show Madam Secretary in India that referenced the role of Hindu nationalism in the Kashmir region.

While there are no specific censorship regulations that target streaming services like Netflix, Hotstar and Amazon Prime in India, a Mumbai Mirror report last week said that I&B minister Prakash Javadekar had given the heads of major streaming platforms 100 days to finalise a code of conduct. The government has also been pressuring companies to set up an adjudicatory body that would prevent them from airing content that has been barred by Indian courts, outrages religious sentiments and promotes violence against the state, among others.