The “Media Policy-2020” authorises the J&K government's own officers to decide on what is “fake news” and proceed against journalists and media organisations. 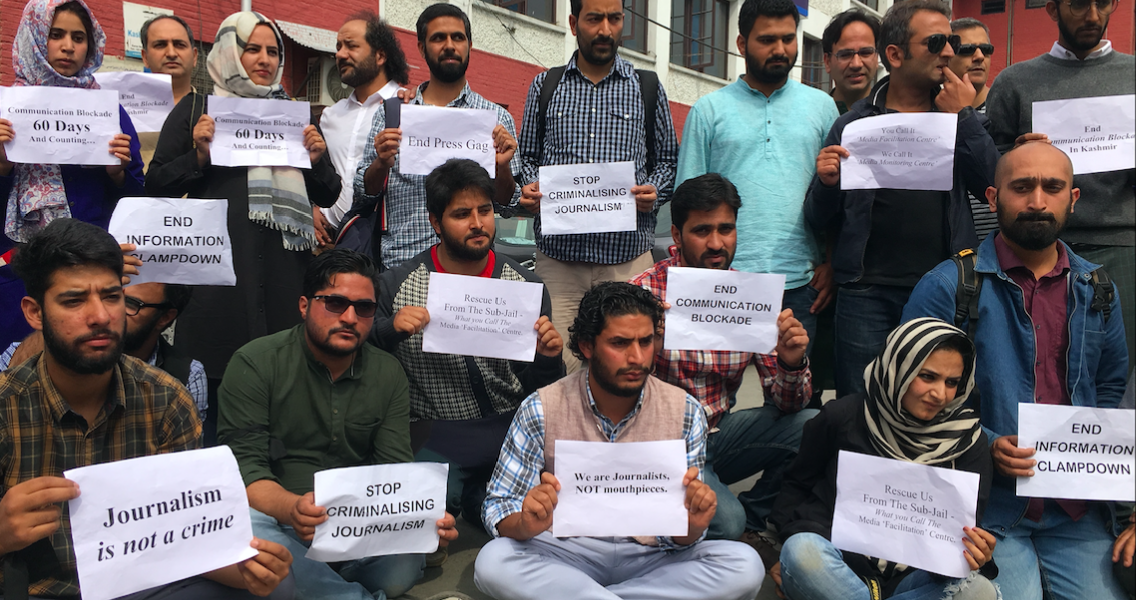 A protest by Kashmiri journalists against the restrictions that have made their work difficult. Photo: Mudasir Ahmad

Srinagar: The Jammu and Kashmir government has given itself unbridled powers to take action against journalists and media houses over “fake reports,” in what seems to be an attempt to tighten the grip on the flow of news from the troubled region.

Under the new media policy, government action could range from proceeding down the legal route against the journalists and stopping advertisements to the media organisations.

The “Media Policy-2020” authorises the Directorate of Information and Publication Relations (DIPR) to “examine” content of print, electronic and other forms of media for “fake news, plagiarism and unethical or anti-national activities.”

“Any individual or group indulging in fake news, unethical or anti-national activities or in plagiarism shall be de-empanelled besides being proceeded against under the law.

“There shall be no release of advertisements to any media which incite or tends to incite violence, question sovereignty and the integrity of India or violate the accepted norms of public decency and behaviour,” reads the 50-page policy.

The political parties, National Conference and Peoples Conference have reacted strongly to the new media policy, terming it a ‘remnant of colonial-era censorships’ and the “darkest era of curbing press freedom”.

This is the first time that a government of Jammu and Kashmir has come up with a policy that authorises its own officers to decide on what is “fake news” and proceed against journalists and media organisations.

“Any fake news or any news inciting hatred or disturbing communal harmony shall be proceeded against under IPC/Cyber laws. A suitable mechanism with specific TORS shall be set up by the DIPR for monitoring the above and ensuring adherence to the guidelines,” reads the policy document.

The DIPR, which shall ensure implementation of the policy, has also been entrusted to device a mechanism for “suitable coordination and information sharing” with security agencies in cases of identified fake news.

The policy mentions that J&K has significant law and order and security considerations and it has been fighting a “proxy war supported and abetted from across the border.”

“In such a situation, it is extremely important that the efforts of anti-social and anti-national elements to disturb the peace are thwarted,” says the policy.

It emphasises on verifying the antecedents of newspaper publishers, editors and key staff members before empanelling newspapers and online portals for advertisements.

“It shall be made incumbent that before empanelment of newspapers and news portals for release of advertisements by the government, the antecedents of the paper/ news portal as well that of its publishers/editors/key personnel are duly gone into. This shall be duly reflected in the empanelment guidelines,” reads the policy.

Similarly, the DIPR has been asked to involve “relevant authorities” for finalising accreditations of journalists.

“A robust background check including verification of antecedents of each journalist would be carried out with the assistance of the relevant authorities. For this purpose, the guidelines for accreditation shall be revised and updated to reflect this requirement,” reads the policy, adding the aim of the policy was to create a “sustained narrative on the functioning of the government in media” and promote the “highest standard of journalism”.

The new media policy has been issued at a time when the J&K government is facing criticisms over harassment of journalists in Kashmir.

‘Remnant of colonial-era censorships, revoke it’

National Conference spokesperson Imran Nabi Dar said the policy which was an “assault on freedom of speech and role of the press in a democracy.” He said a watchdog in the shape of Press Council of India and similar other bodies adjudicate and regulate press under the Press Council Act-1978.

“This policy obliquely stifles media’s right to ask tough questions and highlight lacunae in the administration. It seems to be a remnant of colonial-era censorships and will choke the already constrained space for free working of the press,” Imran said.

Demanding rollback of the policy, National Conference said, “Such anti-democratic gags will obstruct the dissemination of free and fair press. It is also an infringement of the people’s right to information.”

Peoples Conference said the policy was the “lowest of the low” and “India now joins the notorious club of the most repressive regimes of the world, in terms of freedom of expression.”

The party spokesperson Adnan Ashraf said the new policy was plain censorship. “The government wants to see reality not as it exists but as it wants to see it exist. The policy gives them the power to decide what is fake and unethical. And no prizes for guessing, anything remotely true or critical of the government will be categorized as fake or anti-national news,” Ashraf said.

Stating that the policy will herald the “darkest era of curbing press freedom wherein the government will script custom made versions of reality,” Ashraf said the policy will be at its “coercive best and will be utilized to further mute the muted.”

“They are formally recognizing what they have been doing informally. Who defines fake news, who is the faker, the publisher, or the enforcer? Fake news per se is evil but faking a law to fake enforcement will go down as the cruelest fetter on press freedom and will be perpetually held in odium,” he said. 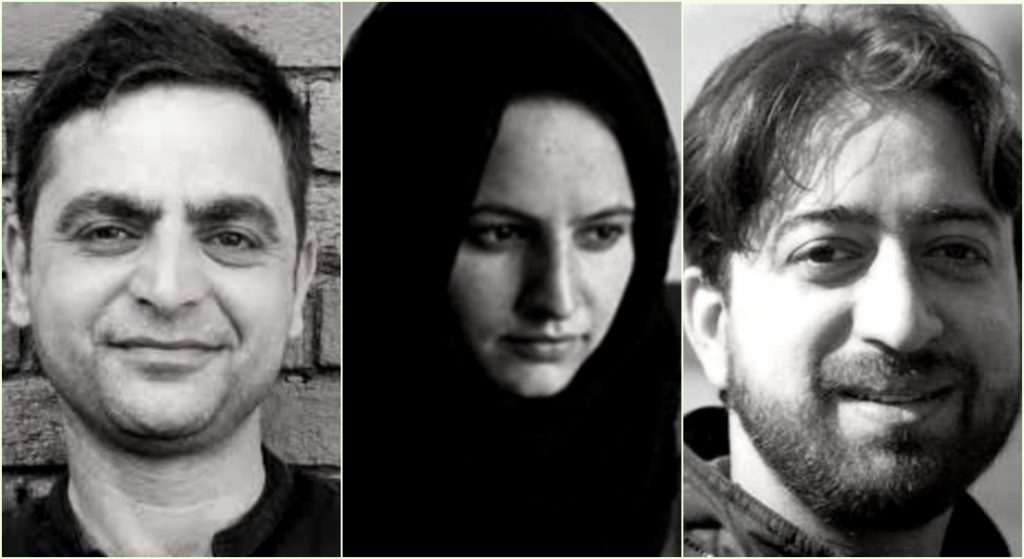 In April this year, the J&K Cyber Police filed a case against a Kashmiri author and journalist Gowhar Geelani for “glorifying terrorism in Kashmir” through social media posts, days after a photojournalist Masrat Zahra was booked under the UAPA for publishing “anti-national” posts on social media.

The Hindu reporter and senior journalist Peerzada Ashiq was also questioned in connection with an FIR filed against his report headlined, headlined ‘Kin allowed to exhume bodies of militants in Baramulla.’

Last month, the police summoned Fahad Shah, the editor of a local news portal, The Kashmir Walla, over a report on a Srinagar gunfight in which two militants were killed and more than 12 houses were completely or partially damaged.

Kashmir Press Club president Shuja-ul-Haq said the group will analyse the new media policy. “We will sit together, analyse the media policy and respond to it accordingly,” he said. He, however, said many journalists have expressed anguish against the policy.

A senior journalist, who works with a Delhi-based media organisation, said the policy was “another move to choke the media in Kashmir.” “This is part of the pattern of that we have been witnessing since August last year,” said the journalists.