Article 370: How International Media Covered the 'Constitutional Coup' in J&K

The Guardian said that revoking Article 370 is a "statement of intent and ideology", and the New York Times alleged that the Modi government has "unilaterally wiped out the autonomy of the restive Kashmir region".

Screenshots of stories published by the foreign media.

New Delhi: August 5, 2019, marked a remarkable breach of the Indian constitution, as India scrapped Article 370, which gave the state of Jammu and Kashmir special status. Not only will the state now be bifurcated into two union territories – J&K and Ladakh – but also all decisions about the state will be made by the Centre in New Delhi rather than by the people and their elected representatives.

While Union home minister Amit Shah revoked Article 370 in parliament and the nation erupted – either in celebration of Kashmir’s ‘integration’ or in fury of the BJP’s outright negligence of constitutional procedure – local leaders like Mehbooba Mufti and Omar Abdullah were put under house arrest, there was an internet blackout and 35,000 troops deployed in the Valley.

The response has been varied. The Guardian stated that revoking Article 370 is a “statement of intent and ideology“, and the New York Times alleged that the Indian government has “unilaterally wiped out the autonomy of the restive Kashmir region“.

Iltija Javed, Mehbooba Mufti’s daughter, told the New York Times, “We feel there is an atmosphere of death looming over us. We don’t know what to expect. We are not allowed to get out of our houses. Telecommunications are all down. For the first time in 30 years they snapped landline connections as well. So there is no way even ordinary Kashmiris here can like communicate with each other, and know what exactly is going on. Everybody is in a state of absolute shock and panic.” 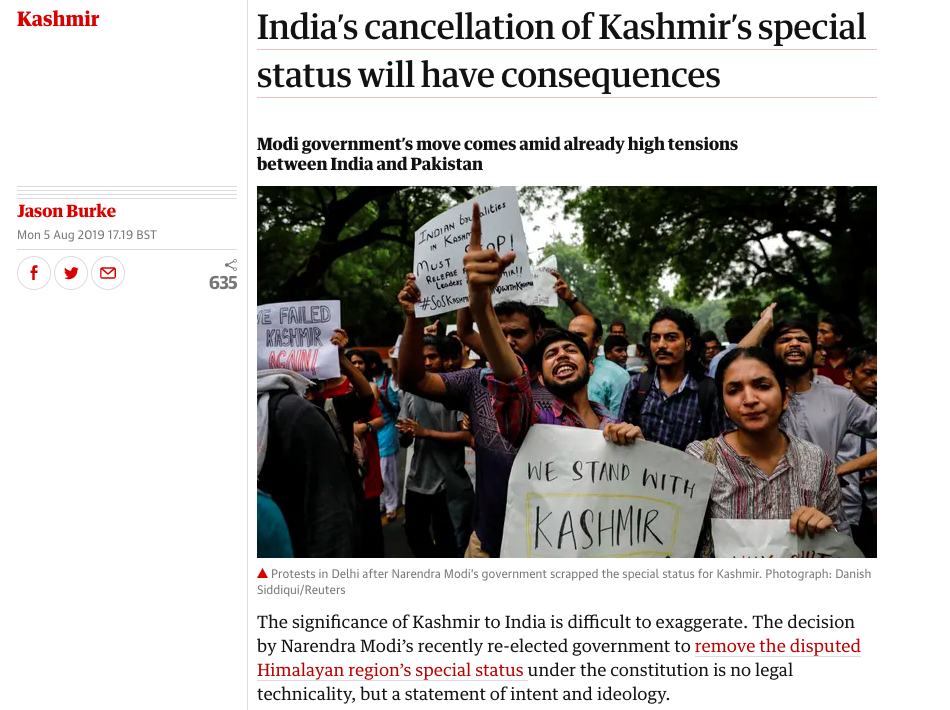 The Guardian’s article said the Modi government’s decision is a statement of ‘intent and ideology’. The Washington Post slammed the scrapping of Article 370, calling it a “disturbing turn” in India’s “settler-colonial project”. It claimed that this was one of many ways in which India is becoming an authoritarian state, “only interested in its expansion and securing power — and one that will flout international law and its own constitution to achieve these ends.” 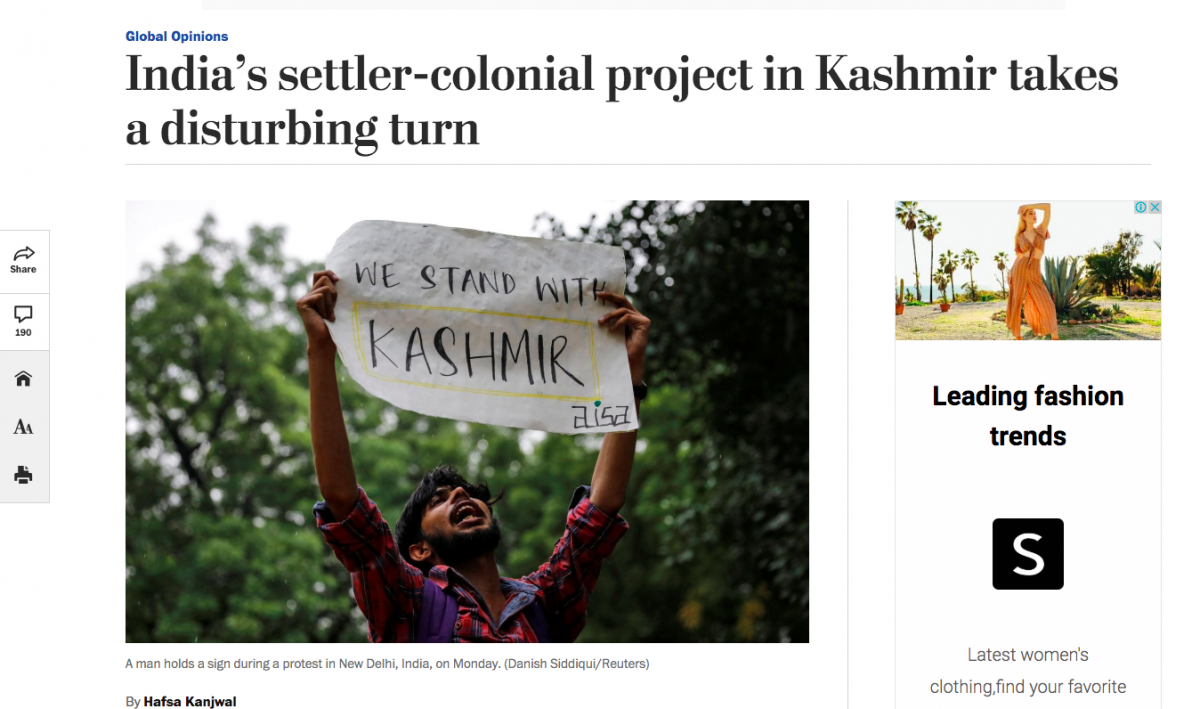 While it was not covered in Middle East Eye, Al Jazeera quoted Mufti, calling Monday the “darkest day” for Indian democracy, and highlighted the ire of Indian and Pakistani activists, condemning the demoting of Kashmir into a union territory. While some international media platforms such as BBC and RT News took a more neutral stance, CNN highlighted that revoking Article 370 is just one step of the BJP’s “long-held agenda” to make India a Hindu state. Furthermore, The Independent said that while the BJP claims that they have finally solved the long-disputed Kashmir conundrum, they have only made matters much worse. 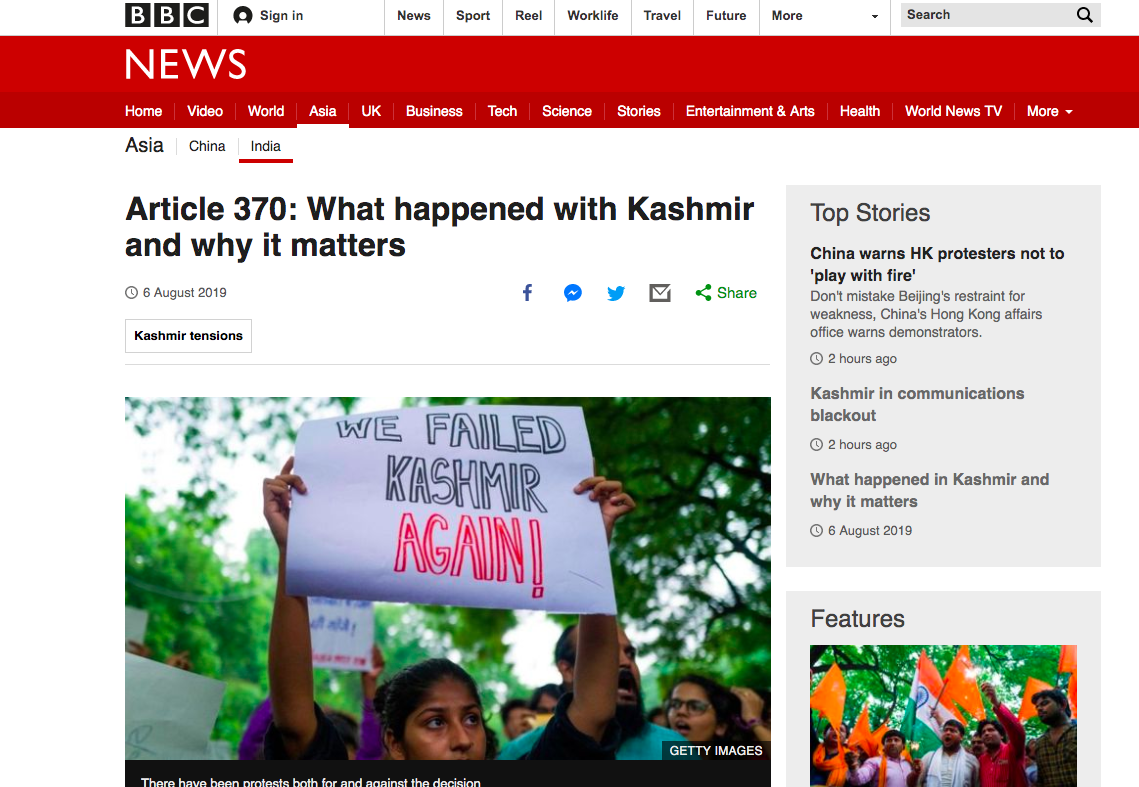 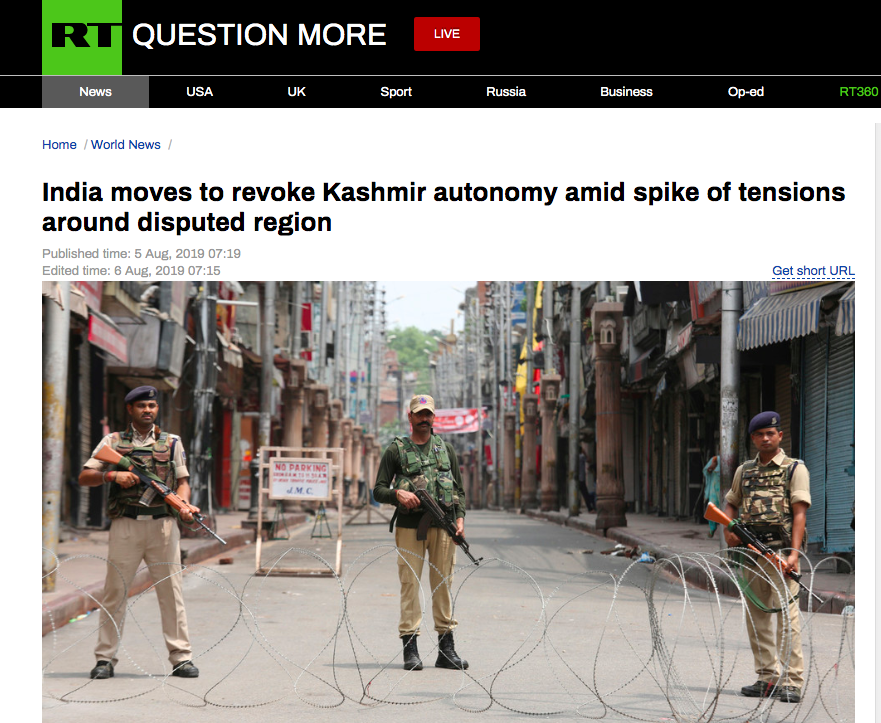 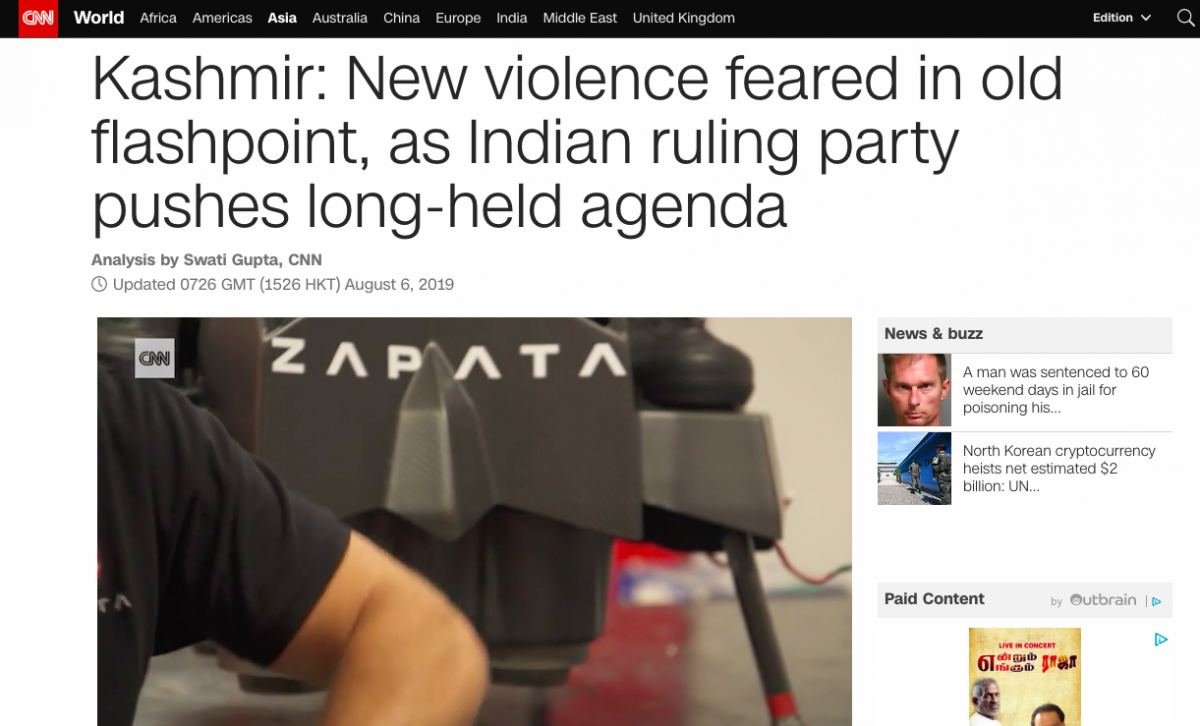