With the government's ad ban choking revenue, journalists in the Valley are paying the price. Srinagar: Syed Rizwan Geelani, 30, never thought that a time would come when he might have to do doing something other than following his passion – journalism – to make ends meet.

But with a family to support, he has very little choice.

Things were going smoothly enough until February 21, 2019, when the newspaper he works for as a reporter, Greater Kashmir, was banned from receiving advertisements from the state government. This prompted the daily to slash the monthly salaries of the staff.

The state of Jammu and Kashmir, which is under presidential rule, ordered the administration to stop advertisements to two English dailies – Greater Kashmir and Kashmir Reader – earlier this year.

The ban was extended to Kashmir Uzma in April, the sister publication of Greater Kashmir. Despite no formal order, the newspaper owners were informed that the ban was imposed by “higher-ups” without citing any specific reason.

Also read: Govt’s Ad Ban on Kashmir Dailies Seen as Yet Another Attempt at Media Coercion

The ad ban has hit hard the dailies financially as most newspapers in the state are dependent on government advertisements. As a result, the future of around 60 journalists is at stake.

This is not the first time that the government has employed such tactics. In October 2011, the home ministry starved five newspapers for advertisements. The cuts came after the coverage of a 2010 uprising which had left 120 people dead.

Then, on October 18, 2017, the Union home ministry sent a letter to the Jammu and Kashmir government asking them to stop government ads to some media outlets that allegedly published “anti-national articles”.

With no corporate sector in the Valley, government advertisements constitute the bulk of revenue for Kashmir-based newspapers.

Living with a harsh reality

Geelani, who got married last year and has a family now, says things have become very difficult financially.

“The situation has put us under stress. The government has to think about it otherwise, we will be on the streets,” he says. He makes it clear that it is not the organisations to blame as their hands have been twisted.

According to Rashid Makhdoomi, the printer and publisher of Greater Kashmir, they were earning around Rs 15-20 lakh per month from the state advertisements.

“We have to think about our survival, so are bound to take these measures as we are wholly and solely dependent on government ads,” he says.

The ad ban also prompted both dailies to reduce their pages. The 20-page edition of Greater Kashmir was trimmed to 12 pages while Kashmir Reader is publishing 12-pages instead of 16 now. It has also affected the editorial policy of both newspapers.

One senior op-ed editor said that he can’t even write an editorial of his choice.

“I have to inform my owner about the subject that I am supposed to write on,” says the editor, wishing not to be named.

A newspaper reporter who covers local economy says the ad crunch and other pressures on local media have created uncertainty in the newsroom.

“Every day there is talk about salary cuts and even layoffs… It is difficult for a journalist to deliver in such an environment” he says.

The reporter says in 2015 he took the decision to return back to the Valley after pursuing an education and working in media outlets in several metropolitan cities for more than a decade.

“As things seem to be uncertain, I am exploring other work options. Life in a newspaper was a perfect setting for me for this phase of my career but due to the uncertainty now I am contemplating other career options,” he says.

There is a lot of uncertainty and fear among journalists and other employees working with the two dailies.

Greater Kashmir employs around 500 employees including reporters, sub-editors and other staff while Kashmir Reader has more than 100 people on its payroll. The editor-in-chief of Greater Kashmir Fayaz Kaloo was interrogated for nearly a week by the National Investigation Agency (NIA) this month. Following that, the organisation fired three senior editors.

The agency, according to a report, also summoned the editor-in-chief of Kashmir Reader Haji Hayat Mohammad Bhat for questioning in connection with a “terror funding case”

Insiders say that both the dailies ensure that the front page doesn’t disappoint the state after the NIA summon.

The media in the Valley has been under tremendous strain since 2017. Both central and state security agencies have started detaining and interrogating journalists, starting with Kamran Yusuf, a photo journalist who was arrested by NIA and was behind bars in New Delhi’s Tihar jail for over six months.

The agency also summoned this reporter for an interview he conducted with separatist leader Aasiya Andrabi. 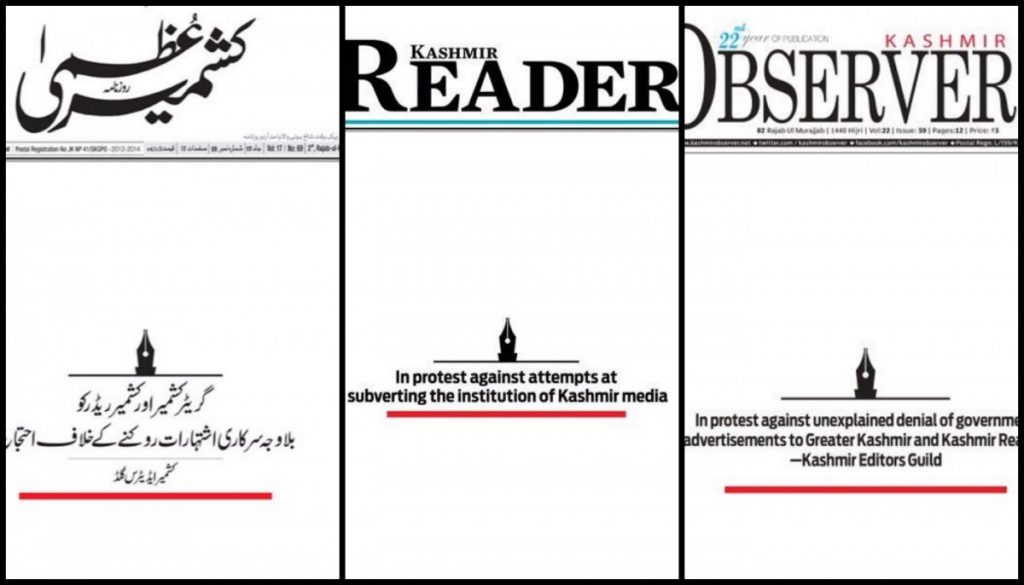 Kashmir papers published blank front pages to protest the ban on advertisements against Greater Kashmir and Kashmir Reader in march 2019.

In August 2018, another journalist, Asif Sultan, was arrested and for allegedly “hatching criminal conspiracy” and “harbouring terrorists”.

On October 22 the same year, another Kashmir journalist based in New Delhi was summoned by notorious Counter-Intelligence Kashmir (CIK) of Jammu and Kashmir for his work.

Following that, the CIK summoned a few more journalists for their stories and Facebook posts.

On June 24 this year, Ghulam Jeelani Qadri, the 62-year-old editor of Afaaq, an Urdu daily, was arrested in a midnight raid. He was arrested in a 29-year-old case where he and seven other editors had been booked for publishing a statement by Hizbul Mujahideen chief Syed Salahuddin.

The advertisement ban has brought untold miseries to the staff. According to sources, Greater Kashmir has slashed salaries of its staffers by 30-50% and is readying itself to lay off some employees in the coming months if the situation worsens.

Although Kashmir Reader has not slashed salaries yet, the management, insiders say, are using different tactics to force reporters to resign. “We have started to feel the brunt of the ad ban. Various tactics are being used to pressurise us,” said a reporter on the basis of anonymity.

The reporters also fear losing their jobs in the coming months. The newspaper’s owner, Haji Hayat, refused to comment.

For better options, many are forced to move to New Delhi and other states. Although there were a few online web portals that allowed for more opportunities, due to a lack of a revenue model, most have failed to take off.

To top it, many newspapers recruit government employees to work as editors and reporters as a part-time job – further crunching the space for youngsters.

For Geelani, journalism was a full-time job, but may now have to be relegated to a part-time job.

Professor Syeda Afshana, who teaches journalism at Kashmir University, thinks that the current ad ban is ultimately going to hit the journalism in the state very hard.

“I see it as a big setback for the media industry of the Valley and unfortunately you can’t have any alternative to censorship,” she maintains.

She says it’s not easy to make any vibrant economic alternatives for newspapers here so that they may run independently. “You don’t have the concept of crowd funding either and there is no revenue model other than government ads so these organisations can’t survive and the employees can be jobless.”

According to her, the ban will discourage many interested in the field journalism and force them to look at other career options.

“It’s a big challenge to save these intuitions that have provided a platform and have groomed hundreds of journalists working in different national and international organisations,” Afshana says.

As of now, journalists here have pinned hope that the first elected body in the press club will take up the issue with the government and come to a much-needed resolution.