The Network of Women in Media hopes to collect more with their fundraiser so that women journalists in Afghanistan have a way of responding to the crisis. 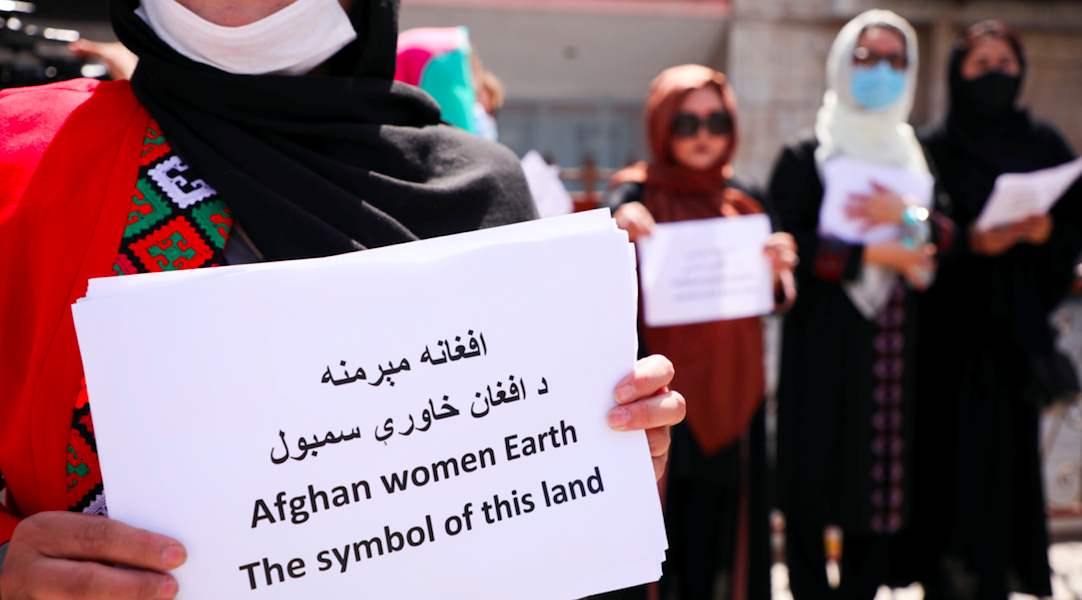 FILE PHOTO: Afghan women's rights defenders and civil activists protest to call on the Taliban for the preservation of their achievements and education, in front of the presidential palace in Kabul, Afghanistan September 3, 2021. Photo: Reuters/Stringer

New Delhi: Amid fear and instances of rampant human rights violations since the Taliban takeover of Afghanistan, a major worry has been the death knell to free media.

The Network of Women in Media, India, in solidarity with the “journalists and all other beleaguered civilians in Afghanistan, especially women” had started a fundraiser for Afghan women journalists on September 9.

‘Drop in the ocean

With only one week left for the fundraiser to end, the group hopes to raise more money as financial support is one of the main requirements of women journalists in Afghanistan.

The money raised will be donated directly to the cause after taking care of minimal expenses.

“It is a tiny drop in an ocean of need. Funds are required for flight tickets, visas, and even for daily subsistence and milk for children. So we hope to raise much more,” Laxmi Murthy, a journalist based in Bengaluru and member of the Network of Women in Media, India, said.

Started in partnership with the Media Safety and Solidarity Fund, the NWMI has organised a print sale of photographs by the Associated Press.

Murthy, who has been leading this initiative said the swift takeover of Afghanistan by the Taliban in early August left her and other members of the NWMI horrified.

The women journalists in Afghanistan that Murthy and NWMI were in touch with, she says, described their situation as dangerous. “They were unable to work, unable to even move around and forced to flee the provinces and go into hiding as they were being targeted,” she told The Wire.

The NWMI statement reads, “Women journalists [in Afghanistan] that the NWMI has been in contact with are bearing witness to the utter chaos, terror and uncertainty as the nightmare of a brutal Taliban reign becomes a reality, pushing back decades of hard-won progress for women and girls, upon whom the Taliban has meted out particularly horrific treatment merely on account of their gender.”

In 2015, the NWMI had reached out to journalists at Radio Roshani, the all-women radio station in Kunduz that had been destroyed by the Taliban, putting out a statement in their support.

“This time too, we reached out as an act of professional solidarity with women journalists who tell stories of their people, exposing ground realities at great risk to themselves,” Murthy said.

Murthy on behalf of the NWMI said that it is the duty of Indian media persons to reach across borders to our colleagues in distress, to show solidarity and let them know they have not been “abandoned by the world”.

However, from raising money to finally ensuring that it reaches the right place, this initiative is full of challenges.

One of the main challenges that the group is facing with Afghanistan’s banking system having become “practically dysfunctional now,” Murthy says, is to ensure that the funds reach the right people. But a system is in place to work this out, she says.

The IFJ South Asia Press Freedom Report, titled ‘Insecurity and Uncertainty: The Struggle to Survive’ says that eight journalists (four of them women) were killed in Afghanistan between May 2020 and April 2021. It also says that close to 20 journalists were wounded, at least 100 resigned and 50 forced to flee the country.

The report notes, “Such violence and a declining security situation represent a serious counter threat to the achievements of the last two decades in the field of freedom of expression and a free press in Afghanistan.”

Indian photojournalist Danish Siddiqui had died in firing while embedded with Afghan forces before the Taliban had completely taken over.

According to The New York Times, more than a hundred local media companies including radio stations have stopped operating since the Taliban took over. While some were closed down, others were forced out of business by the Taliban.

Qari Muhammad Yousuf Ahmadi is a Taliban spokesperson and interim director of the Government Media and Information Center. His “11 rules for journalists” in Afghanistan released this week included not publishing content that is either in conflict with Islam or derogatory to national personalities.

He has also instructed journalists to produce news reports in coordination with the Taliban government.

The women’s media network has also urged the government of India to extend all possible support to vulnerable civilians and journalists in Afghanistan, particularly women journalists.