When the history of these times is finally written, the media’s reprehensible role in creating a climate of hate will merit a special mention.

A TV9 anchor dressed up in military fatigues and holding a toy gun. Credit: YouTube

‘Pakistan’s Propaganda Busted’, was the screaming headline on top of the TV screen as the anchor interviewed a retired Air Chief Marshall who analysed the downing of an IAF aircraft by Pakistani forces.

In the irony-deficient zone that is the Indian media, I doubt if either the anchor or the news team realised their words were a mockery given the tone and tenour of their own coverage that is little more than the government’s version. But even if they did, would that stop them? Hardly, because they think they are fulfiling their national duty, principles of journalism be damned. The rise in TRPs isn’t a bad bonus either.

“..being a nationalist is a prerequisite to being a journalist,” said Arnab Goswami, the patron saint of modern Indian news television, and his clones and devotees have faithfully followed the dictum. We see nightly displays of such nationalist posturing, which include gung-ho discussions led by earnest young men and women.

On Aaj Tak, on a set with the backdrop of India Gate, five men – no women panelists have been visible in recent days – stood, each one offering solutions for “bringing Pakistan to its knees” and “removing the cancer once and for all.” In the foreground, an audience member waved a huge Indian flag.

Where are the “desh drohis”, screamed another anchor, pointing a metaphorical finger at the usual ‘anti-national’ suspects – students, liberals, peaceniks. On one Telugu channel, the anchor dressed up in military fatigues and held a toy gun. “You furnish the pictures and I’ll furnish the war,” said William Randolph Hearst to his reporter who said that all was quiet in Cuba and there was no war there. Indian television channels have twisted it and want to furnish the war. Media priapism, a doctor friend suggested, is a state that heightens the sense of phoney masculinity. 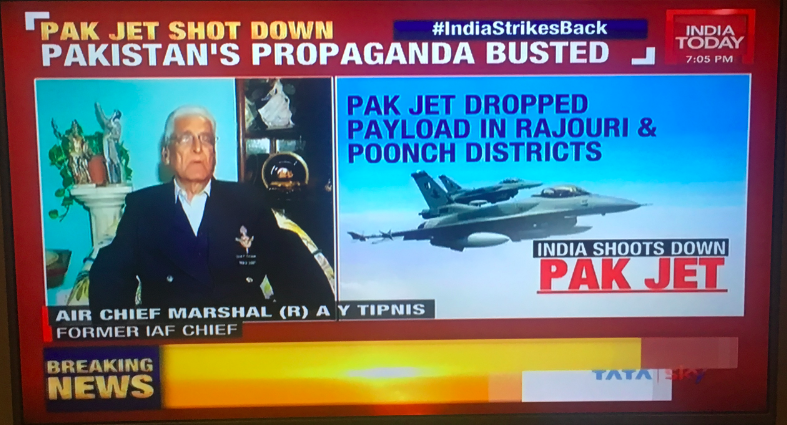 Off the channels was no better. On social media, many senior journalists, who could have been expected to provide some sobriety, went all out, congratulating the Indian Air Force for the airstrikes inside Pakistani territory. It’s a personal view one cannot quarrel with, but this blatant endorsement of hyper-nationalism provides a certain level of legitimacy to jingoistic elements.

The bread and butter practices of journalism call for fact checking, asking the government for some evidence and a certain level of detachment and distance rather than joining in the frenzy and burnishing one’s own patriotic credentials. It may be the ‘mood of the nation’ – a dubious concept to begin with – but even if it is, should it matter to a journalist?

I used to think that the nightly screaming about the nation, patriotism and Pakistan and the constant hate-mongering against ‘desh drohis’ was done with an eye on the numbers. In a difficult environment, where channels found it difficult to make money, every trick in the book was legitimate. The audiences wanted it and the channels gave it to them, ensuring viewer stickiness – it made business sense.

Now I am not so sure. The aggressive campaign against perceived ‘enemies of the nation’ aligns too closely with the agenda of this government and the larger Sangh parivar. The television channels – at least some of them – appear to be in a coordinated effort to build up a particular mood and narrative, one which suits the government.

They are not merely mouth-pieces or supporters of Narendra Modi and his administration – they are the force multipliers, the bellicose media wing, in place to not just propagate but also to drown out other voices. The belligerence is not a pose – it is the main weapon in this armoury, trained on the ‘enemy’ which has to be crushed.

The build-up of nationalist hysteria is not merely a cynical business-oriented tactic but is in tandem with a wider strategy in which not just the television channels, but the social media, the troll battalions and the fake news factories are involved. Videos of patriotic songs were shared. WhatsApp reverberated with slogans and tales of militaristic bravery. At a political rally in Rajasthan, Narendra Modi declared, “saugandh mujhe is mitti ki, mein desh nahin jhukne doonga”.

Sections of the film industry too are willing accomplices. Note the sudden upsurge of patriotic films just in time for the elections. It is no coincidence that films glorifying the military – and even Modi himself – have been released in the last few months. Phrases like “How’s the Josh” have neatly slipped into everyday vocabulary and have been used by ministers, who have openly praised the films like Manikarnika and Uri. 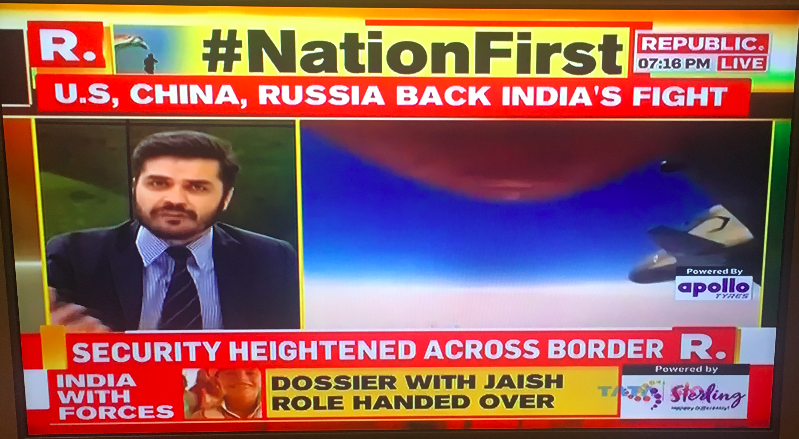 A wonderfully evocative German word, Gleischaltung, which loosely means co-ordination in English, fits in here. It described the well-crafted Nazification of Germany after Hitler became chancellor in 1933. Within months, laws were passed making Germany a one-party state. Opponents and rivals were jailed or killed and the other parties were banned. Trade unions were fused under one banner and soon, almost all instruments of state and society passed in the hands of the Nazis.

Key to this effort was propaganda. Under Joseph Goebbels, the ‘Ministry of Public Enlightenment and Propaganda’ took control of all forms of media, from newspapers and magazines, theatre and music, art and even the new media – that is, radio and film. Those who resisted had to flee or face imprisonment or worse. All of these media were pressed into the service of not just the nation or the party but Hitler himself – since even civil servants and soldiers had to take the ‘Hitler oath’ of loyalty to the nation and the Fuhrer himself. Membership of the Nazi party increased dramatically.

We may not have reached that level of official coordination yet. There is no propaganda ministry, nor a law forcing anyone to declare allegiance to the prime minister. But where is the need? Even what is being done without an officially mandated order is coordination that is most impressive.

Private citizens are free to publicly proclaim their views. A supporter of peace with Pakistan may find the jingoism of another offensive and vice versa. The extreme positions being taken on social media or WhatsApp groups may border on the obscene. But that is what free speech is about.

The media does not have that luxury. Journalists have a professional commitment to be objective and balanced, to report the facts and to ask questions of authorities. They are not part of the government or its propaganda arm. Journalists may hold personal views, but have to keep them aside while reporting – that is no reflection of their patriotism, but part of the professional contract with their readers.

Indian television media stopped any pretence of professionalism a long time ago and are proud to be part of the national (read government) effort. They want to wear their nationalism on their sleeve. They are happy to align with the objectives and agenda of the ruling party. It would be naïve to expect them to change.

But this time they have gone too far. The stakes are high and the potential for things escalating and getting out of hand is real. Constant Pakistan bashing in other times is one thing and mildly diverting during ‘normal’ times, but these are not normal times. A government led by people with a visceral dislike for Pakistan and under pressure to show its tough side could take us towards a very dangerous situation.

The chorus by the media could convert into public opinion which the government could take as a sign of endorsement. Some may even consider the electoral advantages of such a step. The situation could go out of control.

Yet, large and influential sections of the media have shown no sense of responsibility; their record in fanning the worst kind of xenophobia is shameful. It will have serious long-term repercussions to the country’s secular fabric. When the history of these times is finally written, the media’s reprehensible role in creating a climate of hate will merit a special mention.