In a tweet and on-air remark that he later redacted, Sardesai had said that the Delhi Police shot the farmer who died during the tractor rally, a claim that several farmers had made. 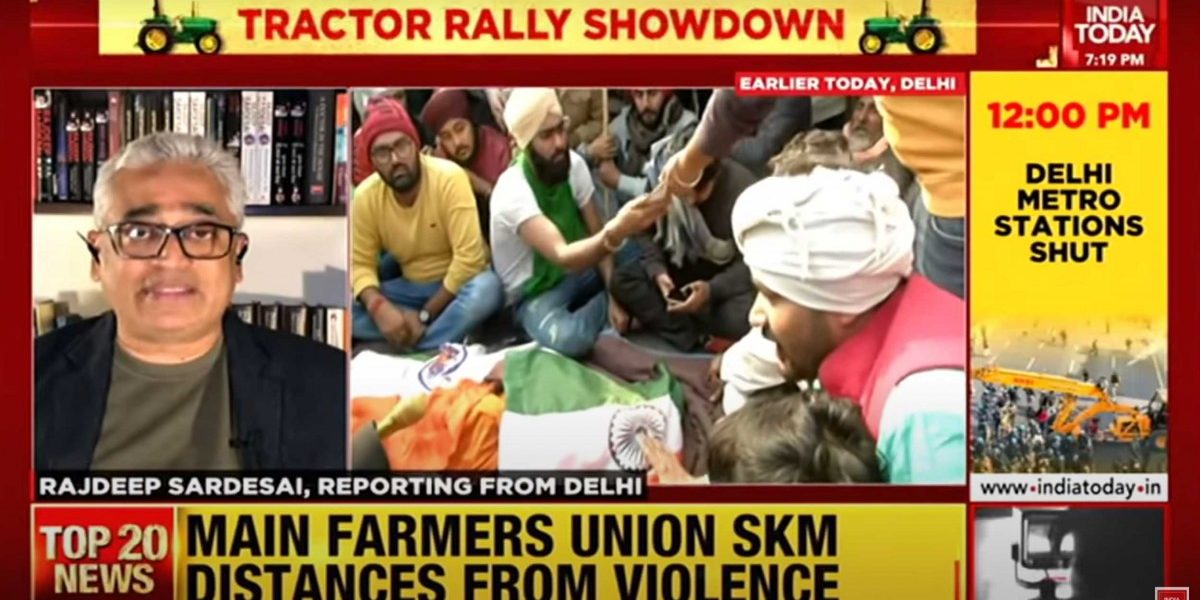 Rajdeep Sardesai redacted his statement on air after the police released a video of the incident. Photo: Screengrab from India Today

New Delhi: In a first for India’s highly competitive news television industry – whose reporters and anchors have often rushed to air with stories or news breaks that subsequently turn out to be incorrect or even fabricated – India Today has taken senior anchor and consulting editor Rajdeep Sardesai off the air for two weeks, citing his on-air claim and tweets of Delhi Police shooting and killing a farmer during the January 26 tractor rally. The channel has also deducted one month’s salary from the anchor.

Sardesai has not commented on the issue but well-placed sources in the channel confirmed these developments.

On January 26, farmers protesting against the three farm laws took out a tractor rally led by several farmers’ leaders including Rakesh Tikait, Darshan Pal and Gurnam Singh Chaduni. Clashes broke out between the police and protesters during the tractor march, and the Delhi Police claimed that more than 300 police personnel were injured. The police later booked at least 37 farmer leaders in an FIR in connection with the violence during the tractor parade, as two farmers’ unions reportedly withdrew from the agitation because of the events that unfolded on Republic Day.

Sardesai had, in a tweet, said, “One person, 45-year-old Navneet killed allegedly in police firing at ITO. Farmers tell me: the ‘sacrifice’ will not go in vain.” The Wire had earlier reported on the issue and maintained that while Delhi Police had said that the farmer had died in an accident, other protesters claimed that the farmer was shot.

The police said that the farmer had died when his tractor overturned. Later, the Delhi Police released a video in which a tractor can be seen going out of control and overturning. Some are still speculating whether the farmer – or his tractor – was struck by a tear gas canister which the police had been firing and lost control of the vehicle.

Also read: At India Today, Anchors Can Spread Fake News While Editor is Sacked For Speaking Out

Minutes after the police video was released, Sardesai retracted his statement and said, “While the farm protestors claim that the deceased Navneet Singh was shot at by Delhi police while on a tractor, this video clearly shows that the tractor overturned while trying to break the police barricades. The farm protestors’ allegations don’t stand. Post mortem awaited.”

While the farm protestors claim that the deceased Navneet Singh was shot at by Delhi police while on a tractor, this video clearly shows that the tractor overturned while trying to break the police barricades. The farm protestors allegations don’t stand. Post mortem awaited.👇 pic.twitter.com/JnuU05psgR

He also tweeted his appreciation for the police, saying they showed “great restraint” at Red Fort and ITO.

Additionally, in his live coverage at 5:47 pm on January 26 for India Today – soon after his tweet was written – Sardesai said, “What we do know is that while the farm protesters that we met insist that the person who died named Navneet Singh was shot at, but the police has provided us with a video that shows very clearly that the tractor overturned.”

However, several BJP leaders still demanded that an FIR be filed against Sardesai or he be fired for spreading “fake news”. In a tweet, Kapil Mishra accused him of inciting attacks on the police  and demanded his arrest while Amit Malviya called for his sacking.

The Delhi Police also filed a total of 22 FIRs in connection with the January 26 rally and have detained around 200 people so far. Multiple videos and CCTV footage are being scanned to identify those involved in the violence and strict action will be taken against the culprits, Delhi Police Commissioner S.N. Shrivastava said.