In J&K, More International News on Front Pages Than News on Kashmir

Getting news on Kashmir, in Kashmir, has become so difficult that editors have no choice but to lead with news of the world instead. 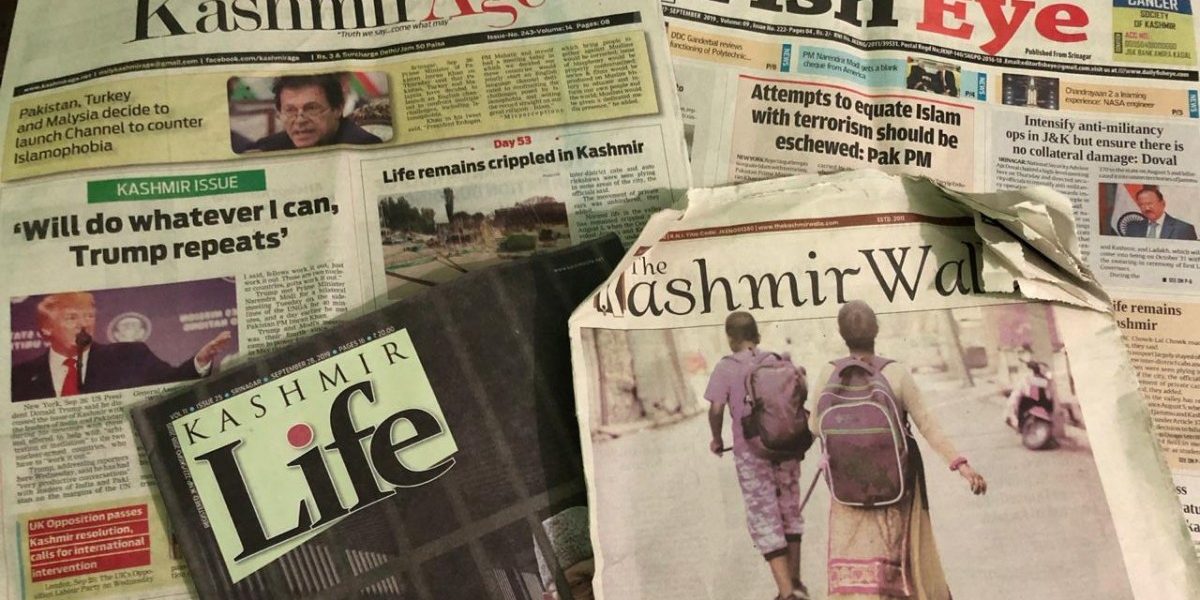 The front pages of Kashmir dailies. Photo: The Wire

Newspapers in Kashmir have become nothing more than a compilation of press notes in the past 59 days since the Central government decided to put a complete communication blockade on the region.

With internet cut off, all local media portals went ‘blank’ on August 5 and remain so till date. Kashmir Times executive editor Anuradha Bhasin, approached the Supreme Court regarding the media gag in Kashmir and said, according to an Indian Express report that she was not able to publish her newspaper from Srinagar as communication was “crippled” after the Centre’s decision to read down Article 370.

Similar is the story of all reporters in Kashmir who say that without their phones, they feel unequipped to file authentic stories, since getting an official quote becomes next to impossible.

“Even if we see an incident happen in front of our eyes, we, as responsible journalists do not file a story without the official quote. We have to maintain the balance, but how to do that? Landlines have only started working approximately a week ago, before that we could not talk to any official regarding any story. Even now, we call officials from the landline but rarely do they pick up. Our sources are unable to contact us and we are just filling pages,” said Tahir Bhatt, a journalist working with a Kashmir-based magazine.

The media facilitation centres are not the solution, largely seeing that today’s media is about minute-by-minute updates. The time spent waiting in line to download press notes and filing stories for media portals or media organisations outside Jammu and Kashmir has affected the information flow. An incident that has happened an hour ago will only reach people the next day and by that time, it may be too late. If there are any corrections or additional information needed, a story may be delayed by two or three days.

But for Kashmir’s indigenous newspaper industry, these are the dark days. Greater Kashmir, the most popular newspaper in Kashmir had already been struggling when government stopped giving advertisements on February 23. But now, with a complete communication blockade, the media organisation has been facing the full brunt of its inactive online website and social media handles as well.

“Since the advertisement was stopped, after August 5, we had to decrease the number of pages. But when the communication blockade continued, it was getting hard to make ends meet. We started focusing upon issues like traffic management and other developmental problems which wouldn’t create any problem for anyone and so our advertisements started again,” says a journalist working with Greater Kashmir.

But a newspaper vendor sitting in Lal Chowk has a different take on the shift in Kashmir’s media scenario. He says, “It is a self-censorship. They know that if they write anything controversial, they will get detained. With no other source of revenue, government advertisements are their lifeline. How will they write against the government then? They are just biding their time till they get back on their feet. Right now, they are crippled.

Magazines like Kashmir Life had to decrease the number and quality of pages. Greater Kashmir did it too but now they are printing like they used to now that they have government advertisements again. People in Kashmir are depending on newspapers more since there is no internet but even in these newspapers, they don’t find much news about Kashmir.” 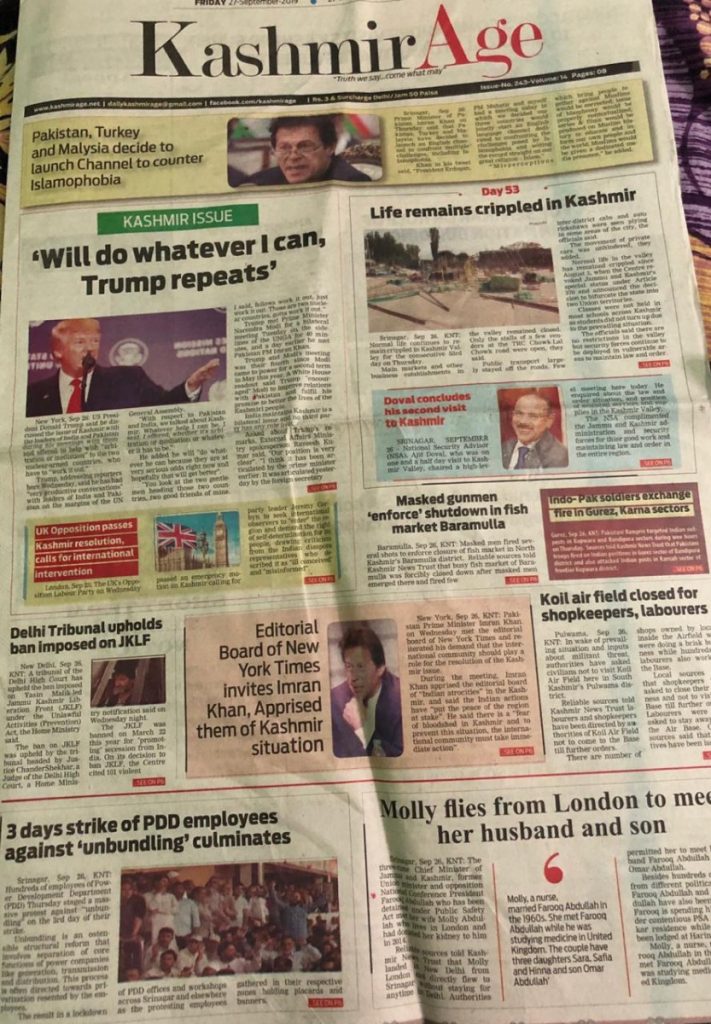 The front page of Kashmir Age. Photo: The Wire.

Two news magazines in Kashmir, The Kashmir Walla and Kashmir Life do write about upon what is happening in Kashmir after the Central government’s decision to read down Article 370 and bifurcate the state of Jammu and Kashmir in two Union Territories but even they are focusing mainly upon the social impact and business opportunities lost instead of any political commentary or noting the security scenario in Kashmir.

Editorials on Article 370 will not be seen in any of the newspapers and if one or two do however make it to print, they are moderated to such and extent that they might as well be about Kashmir’s market slump instead.

Shoaib, a freelancer, says journalists have not been asked not to write, but that they operate under a cloud of fear.

“Greater Kashmir’s journalist was picked up and it doesn’t matter if they were released afterwards, it is still a scary thought. So many people are facing PSA charges now. If the big guns can suffer, what can be done to freelancers like us?” he asks.

“On every newspaper, there will be the same stories, only reshuffled. We don’t feel like we are doing journalism even though this is a most critical time. Journalists from Delhi, Mumbai and Jammu come here and report on what is happening in Kashmir but they do so under the protection of big media houses and thus, according to their editorial policy. Freelancers are suffering the most since no one takes us seriously. Without ID cards from big media houses, you don’t get much access. Earlier, ours used to be the most vital role but now I feel like we can do nothing but wait, and I don’t know for how long,” he says.